Accessibility links
The Knife's 'Silent Shout' Is A Template For Subversive Pop In 2017, to compare a new alt-pop act to The Knife is stating the obvious by default: The duo's 2006 album remade indie and pop in its deliberate, unsettling image.

Shocking Omissions: The Subversive Electro-Pop Of The Knife's 'Silent Shout'

Shocking Omissions: The Subversive Electro-Pop Of The Knife's 'Silent Shout' 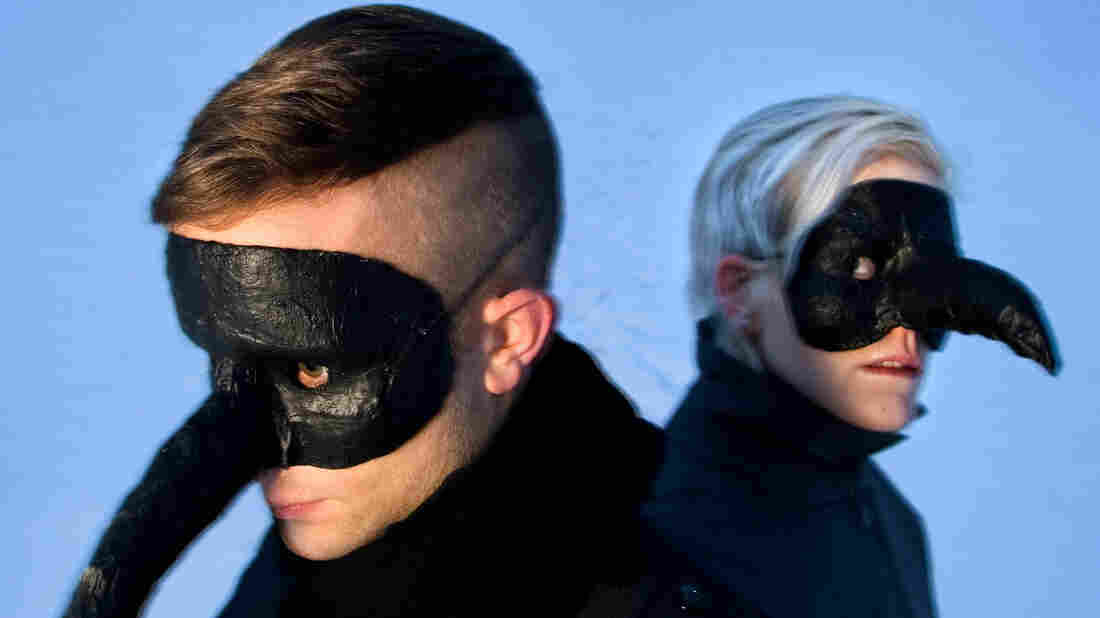 On The Knife's Silent Shout, the duo remade indie and pop in their deliberate, unsettling image. Courtesy of the artist hide caption 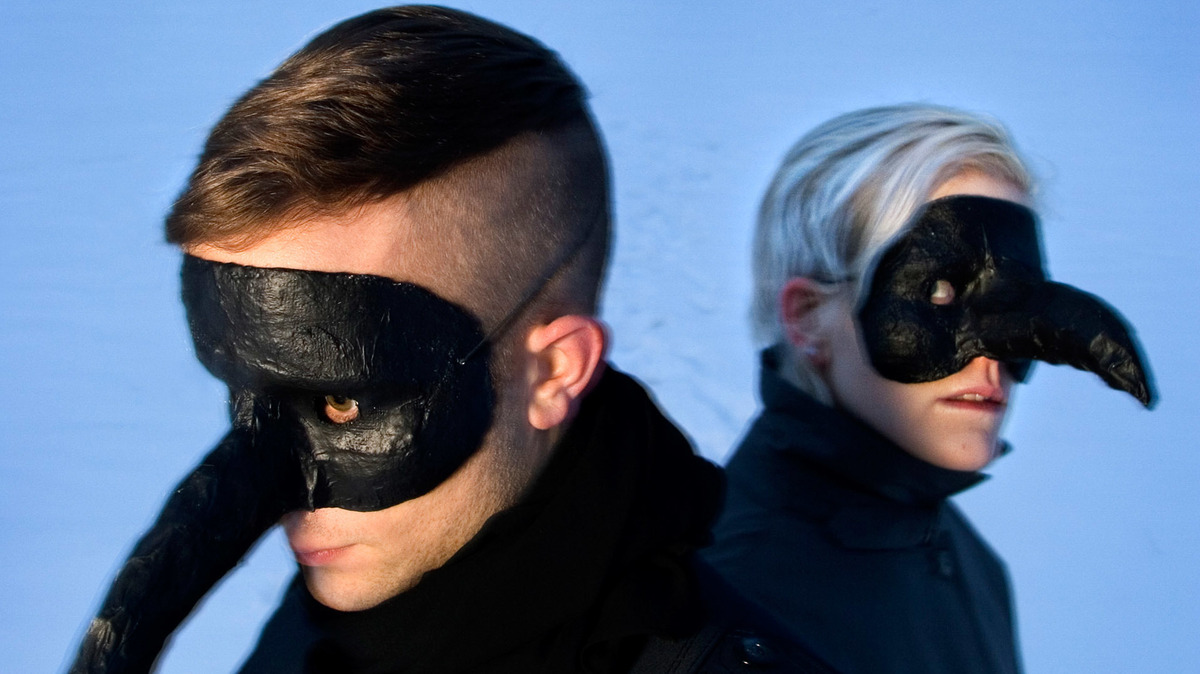 On The Knife's Silent Shout, the duo remade indie and pop in their deliberate, unsettling image.

In 2003, the Grammis (Sweden's answer to music's annual canonization ceremony) selected The Knife, the sister-brother duo of Karin Dreijer Andersson and Olof Dreijer, as Artist of the Year. The duo didn't accept the award, instead sending ape-masked members of the feminist collective Guerrilla Girls in shirts reading 50:50 — a remark on gender parity in music, which didn't exist then any more than it does now. The move suited the material: The band's 2003 album, Deep Cuts, is a provocative, political album with villain monologues by police ("I am a cop, shut up / I piss in your mouth") and womanizing CEOs (the double-entendred "Hangin' Out," which lasts, pointedly, one minute), where the girls of "Girls' Night Out" aren't out for fun but "something to blow up." But its sound was poppier than The Knife's past work, and the duo reaped what the sound sowed: a cover of the album's lead single, "Heartbeats," by folkie José González nearly overtook the original in familiarity thanks to its inclusion in a peppy TV ad.

The fit was odd, as the duo — Andersson, a former member of '90s indie-rock group Honey Is Cool, and Dreijer, a bedroom producer — doesn't shun publicity so much as semi-anonymously troll it. The Knife's photoshoots anonymize the duo with wigs, plague doctor masks and a creeping sense of wrongness; its live shows were full of Lynchian imagery before pop culture reached critical Lynchian mass. Their music is dense with references high and low: Authors Jeannette Winterson and Margaret Atwood coexist among shootfests like Top Gun and Doom. The duo's ambitions are uncompromising; that TV ad's bouncing balls later funded the duo's 19-minute drone tracks and experimental Darwinian opera. Even its interviews are pitch-shifted into confusion. And on 2006's Silent Shout, Andersson and Dreijer remade indie and pop in their deliberate, unsettling image.

The Knife's Radical 'Shaking The Habitual' Is Now A Concert Film

Silent Shout is the sort of album that has been so thoroughly replicated and emulated that in 2017 it almost sounds mundane — oh, another dark synthpop album with weird vocals. Certainly the raw materials had been around. This austere strain of electronic music goes all the way back to Kraftwerk, and the move between Deep Cuts and Silent Shout is just a move from the brighter to the darker part of the '80s. The arpeggiated arrangements throughout were derived from trance music; as an avowed fan of old dance and Southern hip-hop, Dreijer undoubtedly encountered those genres' pitch-shifting, snippetizing and screwing-down vocals. But anyone who's listened to any song by The Knife would never mistake it for anyone else. Aside from one guest verse by Jay-Jay Johanson, there's only one voice present on Silent Shout: Andersson's. She leans into the most startling parts of her range: the most keening highs, the most guttural lows. All fall within the range of the human voice (perhaps even one person's) but Andersson pitch-shifts her voice until dozens of characters emerge, as uncanny, twisted and caricatured as fables. They're not un-human so much as post-human: the voice of a person something has happened to.

Sometimes what's happened to the narrator is left unsaid. On "Silent Shout," the source of the trauma is unnamed, but the arrangement speaks instead: precise as pointillism or pinpricks, darting between octaves to match Andersson's voice, erupting and receding like sudden terrors. Other times, it's explicit. Andersson is an excellent lyricist, who shares with her literary influences an eye for precise grotesque detail: the nightmare imagery of lost teeth and cracked smiles; the metaphors of "Like A Pen" that drift, like the narrator's body, from corporeality to mere scent and breath.

But to read the lyrics to Silent Shout in isolation is to miss the point. "Neverland" starts in medias res, with a woman in a car with a "fancy man" and dawning, impending trouble. On paper, the takeaway is the aphoristic lyric, "Nothing is more fatal than an angry man," but on record, it's how the careening arrangement recedes, zooming in on Andersson's quiet, ragged, and relatively unprocessed, "Will I make it home tonight?" The lyrics to "Na Na Na" read like a bitter call to arms: "I've got mace, pepper spray, and some shoes that run faster than a rapist rapes." The arrangement is simple: an aria over a pentatonic scale, with some backing chords. But the key is in Andersson's voice: processed to near-unrecognizability, with electronic sheen where vibrato might go, gliding over the words until they're blurry. It might sound disembodied, the passive numbness she found in the album. Or is it defiant — weaponized femininity, high-pitched and glaring like sun hitting glass, daring you to listen close?

Sometimes what has happened to the narrator is a fairy tale — the original kind, with fangs. The Nordic runaway stories of songs like "Forest Families" and "We Share Our Mothers' Health" transmogrify the world where mothers flee to the woods, children run away with torches and danger is ever-present; the effect is something like like Michel Faber's The Fahrenheit Twins. "One Hit" is closer to Goblin Market: a monologue by an abuser (the title is literal), told in singsong cadences and punctuated by goony laughter. What a lot of people miss about The Knife is how deeply funny the band can be, and how much of its music is a bitter joke. ("When we make all the processed vocals, we always laugh a lot," Andersson told Pitchfork.) In "One Hit," Andersson's voice slips from her own to that of an asthmatic Falstaff, delivering boasts like a comedy routine, complete with punchline: "Spend time with my family / like the Corleones!" The humor is bitter and disturbing, but ultimately on its narrator. If you listen close, you can hear Andersson's voice in the background — overshadowed, or pulling the strings?

The Knife On 'Shaking' Expectations

Sweden is also, famously, where much of the sound of the Top 40 is forged; perhaps that's why so much contemporary pop music echoes Silent Shout. The band has plenty of direct acolytes: Scottish band Chvrches, whose hit "The Mother We Share" is an overt nod in sound and title; Canadian artists Austra and Grimes, whose work also sets mocking patriarchy roleplay against icy and euphoric arrangements; fellow Swede Robyn, whose transformation from one-album Top 40 wonder to indie-pop darling and label runner was largely inspired by finding a Knife album in a record store. There were more than a few hints of The Knife in the crop of artists in 2009, including La Roux and an early Lady Gaga, who paired electronic music with theatricality and a desire, however buried, to subvert pop. More than a decade later, to compare a new alt-pop album to Silent Shout is stating the obvious by default. You even hear echoes of Silent Shout on the radio, increasingly enamored of dark synthpop, obvious vocal processing and unequal relationships. Did a copy fall into the ever-present hands of Swedish mega-producer Max Martin? Or has the world simply gotten dark enough to resemble Silent Shout?