Accessibility links
For Some Latino Voters, DACA Is Just The Latest Blow From Trump By ending the Deferred Action for Childhood Arrival program, pardoning Sheriff Joe Arpaio and planning to build a border wall, Trump could be turning away voters in immigrant-rich states like Nevada. 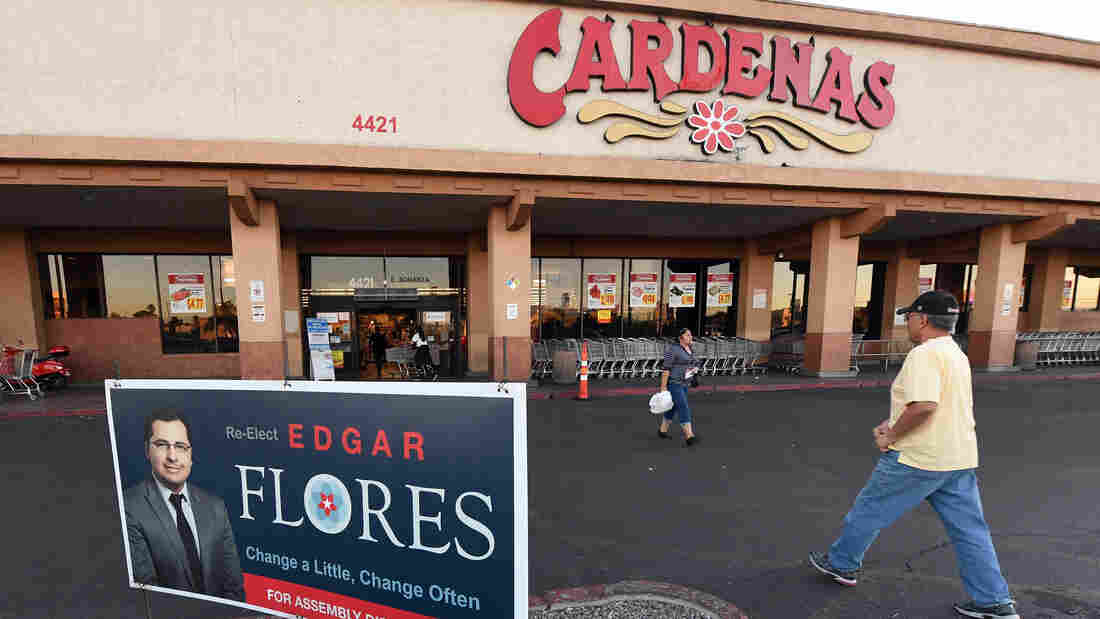 Latinos outside Cardenas market in Las Vegas are hesitant to talk politics today because they feel that they are targeted by the government. Ethan Miller/Getty Images hide caption 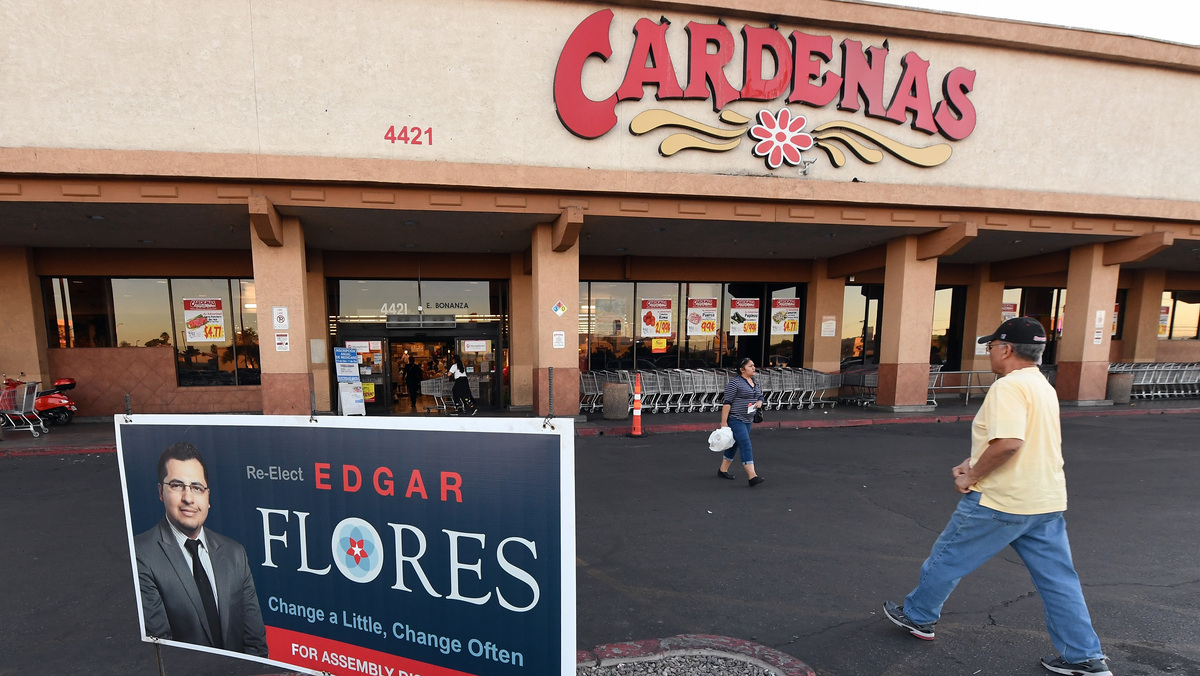 Latinos outside Cardenas market in Las Vegas are hesitant to talk politics today because they feel that they are targeted by the government.

The long lines of early voters outside Cardenas market became a lasting image of the 2016 presidential vote in Nevada. Latinos turned out in force at the Latin American grocery store in Las Vegas, helping deliver the state to Hillary Clinton.

Today, the shoppers at the strip mall are more hesitant, most refusing to talk politics. They're afraid, some say, because they feel like the government is targeting them.

"Oh my God. It's crazy what he's doing right now, and I just had a kid," said Marisol Hernandez. She motions to her baby, strapped in a baby seat and settled in her shopping cart.

Hernandez was referring to President Trump's latest decision regarding immigrants, ending the Deferred Action for Childhood Arrivals program, or DACA, which has allowed young people brought to the country as small children to obtain work permits and avoid deportation.

For many Latinos, it is just the latest blow. Many say they feel under siege by Trump's relentless calls for building a wall on the Mexican border, and measures like his pardon of Sheriff Joe Arpaio in Arizona's Maricopa County, who was convicted for contempt of court for ignoring a judge's order to curtail a crackdown on immigrants.

Many believe the moves will further energize Latino voters to go to the polls, posing a danger for Republicans in states like Nevada with significant and growing Latino populations.

The state will be an important political battleground next year when Republican Sen. Dean Heller defends his seat. Heller is seen as one of the most vulnerable senators in the country, and he's already distancing himself from Trump's immigration positions.

On Monday, Heller told the Reno Gazette-Journal that "While I remain concerned about the way in which DACA came to life, I've made clear that I support the program because hard working individuals who came to this country through no fault of their own as children should not be immediately shown the door."

About 17 percent of eligible voters in Nevada are Latino. And Nevada's Republican Gov. Brian Sandoval made it clear he supports DACA.

He said in a statement that he was "proud to sign into law legislation that allowed DACA recipients to become licensed teachers in our schools and provide a path for them to earn a driver's license which has increased safety for all Nevadans."

It's not the first time Sandoval has been publicly critical of Trump's decisions. He was a vocal opponent of plans to repeal and replace the Affordable Health Care Act over the summer.

Laura Martin, associate director of the Progressive Leadership Alliance of Nevada, which advocates for immigrants' rights, agreed that Trump's policies are creating an atmosphere of fear among all Latinos. About 13,000 people have DACA in Nevada, a state with one of the highest rates of undocumented people in the country.

"It affects so many people here. You can't live in Nevada and not know somebody who would be directly affected by this," Martin said.

Trump, she said, "is casting a wide net and he is encouraging people to see someone maybe like me, the color of my skin, the texture of my hair and make an assumption and that just puts people in danger and that's where the fear comes. "

She says since Trump was elected, her office gets hate mail and people threatening to call immigration.

One email she received recently said this. "Everyone of you illegals should be gathered up and deported. You bring disease, crime and corruption." It ends "leave, NOW."

Michael Kagan, director of the immigration law clinic at the University of Nevada Las Vegas's law school, said Trump is seen as not just against illegal immigration, but all immigration.

"What I see is that Donald Trump has gone back on many things he said in the campaign, on many issues, but he's actually been very consistent, on being anti-immigrant and appealing to a white voting bloc," said Kagan. "He's an anti-immigrant president."

Kagan says that Trump seems willing to sacrifice the Latino vote for the rural, white vote in middle America that helped get him elected.

Democrats are jumping on the DACA decision to get Latino voters registered and to the polls in the next election, and they likely will find a receptive audience. While Latinos have historically voted more Democratic, their low turnout rates means their potential voting power has never been fully realized.

Hernandez, who voted last year at the Cardenas grocery store, says she'll vote again to push the president out.

"What did the Hispanics, and everyone that's not white, do to him?" Hernandez asks. "Why did he say 'oh the first thing I'm going to do is I'm going to put a wall."

But there are Latinos who vote Republican, and believe Trump will bring positive immigration reform. Clinton didn't fare as well among Latino voters as Obama did in 2012, according to the Pew Research Center.

Anthony Osnaya is a construction work who came from Mexico when he was 16. He ran for local office last year as a Republican because, he says, the party aligns with the Latino's community's values, such as family and hard work.

Osnaya said he's a staunch Trump supporter. He told NPR he was hoping Trump would preserve DACA, then said he had no further comment once the details of the decision became public.

"It's just media, feeding terror kind of, making him into a bad guy, a bad president, the worst," Osnaya said. "He's just doing his job."

The so-called "Dreamers" also are mobilizing. Miriam Cadenas, who has DACA, made thousands of phone calls and knocked on doors to get people out to vote last year, trying to protect herself.

The 20-year-old was brought to the U.S. from Mexico when she was eight. But her 4-month-old son is a citizen, and she fears being separated from him.

"People asked 'Well, why don't you vote?' Well, I can't or else trust me I'll be the first one," she said. "But the people who have DACA had a huge impact. That was all of our work, calling people, getting them registered. We did our part by turning Nevada blue."

"The Latino vote is very important. We're here and we're not going anywhere," she said. "I feel like [Trump's] behavior, the only thing it's going to do is bring all of us together and fight and give him a run for his money."