Accessibility links
Alt-Right-Related Terms, Defined: Cuck, Masculinist, Cosmopolitan, Ghost Skin As a group of activists complete a March to Confront White Supremacy, here is a list of terms racist and misogynist groups use in defending their views. 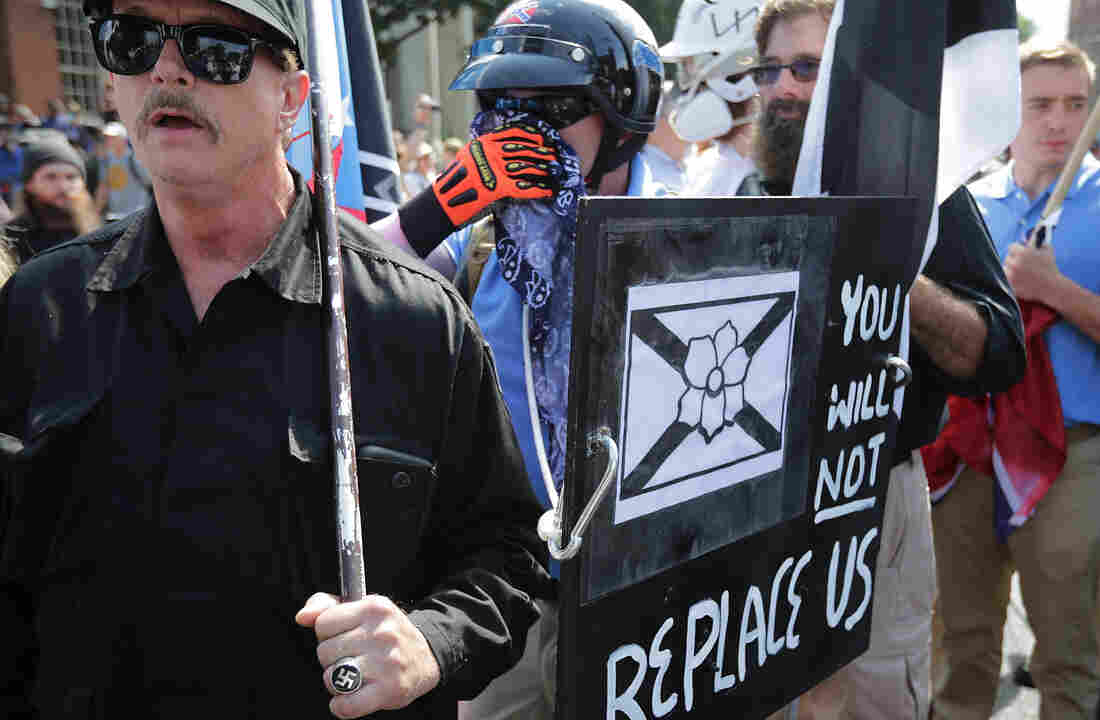 White nationalists, neo-Nazis and members of the "alt-right" march during the United the Right rally in Charlottesville, Va., on Aug. 12. Chip Somodevilla/Getty Images hide caption 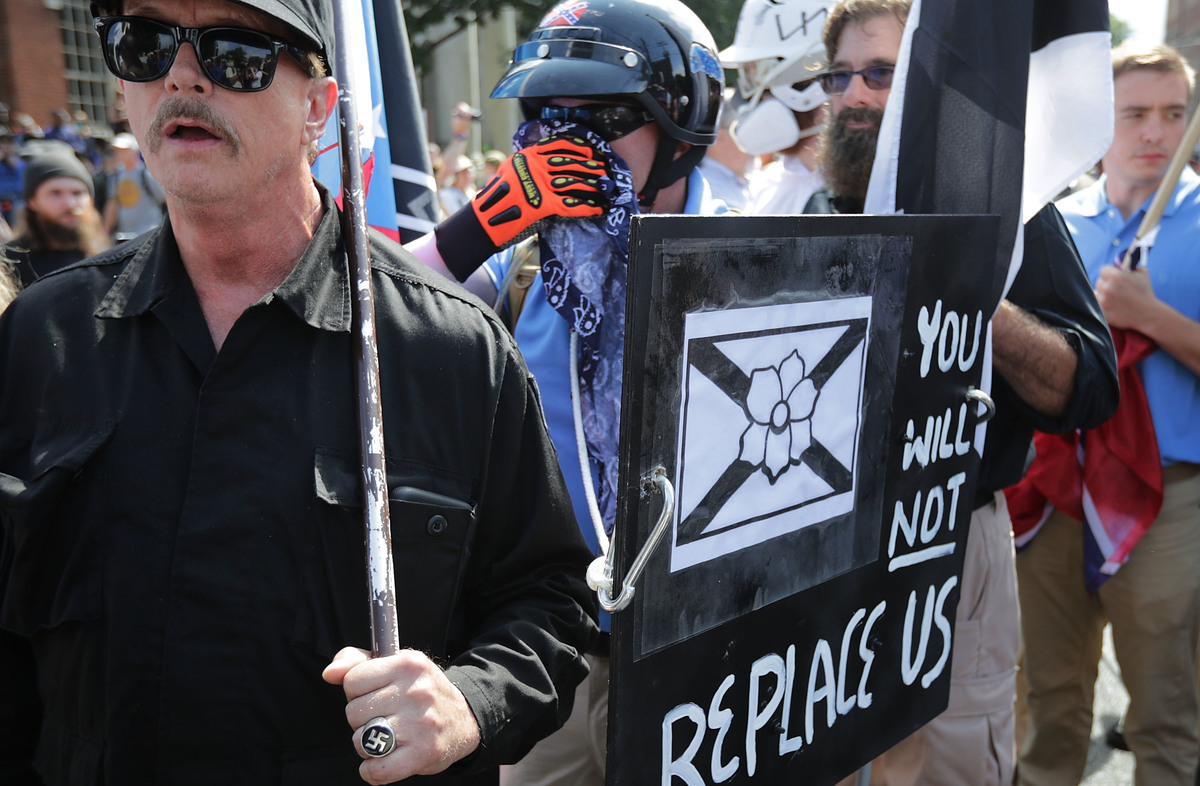 White nationalists, neo-Nazis and members of the "alt-right" march during the United the Right rally in Charlottesville, Va., on Aug. 12.

Dozens of activists have been on the move through rain and sunshine, taking part in a 10-day protest called The March to Confront White Supremacy. The roughly 118-mile walk began in Charlottesville, Va., and culminates in a rally in Washington, D.C., on Wednesday.

Organizers of the march have said it is a nonviolent response to the violence of white supremacist groups that convened in Charlottesville for the Unite the Right demonstrations in August. Clashes between the white nationalists and counterprotesters resulted in multiple injuries; one attendee is charged with second-degree murder for the death of 32-year-old counterprotester Heather Heyer.

In the week that followed, President Trump was widely criticized for repeatedly placing blame for the violence on "both sides" and for not immediately and explicitly denouncing the role of neo-Nazis and the KKK.

"We demand that President Trump be removed from office for allying himself with this ideology of hate and we demand an agenda that repairs the damage it's done to our country and its people," the march's website states.

The marchers are also calling for all charges to be dropped against all counterprotesters who were arrested during the Charlottesville melee, as well as the removal of all Confederate statues and monuments, which the Unite the Right groups said they were defending.

Our #Cville2DC marchers. We the people have the power ❤️ pic.twitter.com/3N2Meg16RW

For many, the images that were captured in Virginia — torch-wielding groups of mostly white men chanting, "Jews will not replace us," and heavily armed men in pseudo-official looking uniforms — were a shocking revelation about the how well-organized the networks of racist organizations are.

While the expressions of racism in Charlottesville were explicit and overt, much of the language that is often used within white nationalist communities is still a mystery to most Americans. To help readers better understand what they may be reading or hearing in coverage of this and related events, here is a brief glossary of some of the most commonly used terms by the so-called alt-right, a broad term that includes white supremacists, anti-Semites, neo-Nazis and misogynists.

We also have a separate primer on the broadest terms — alt-right, white nationalist, free speech, hate speech — as well as a deeper look at the anti-fascist or "Antifa" movement.

These groups tend to be "obsessed" with masculinity, according to Cristina Lopez, a senior researcher at Media Matters for America, who has for years been tracking the language of the alt-right and other white nationalist and racist groups online. Lopez says they focus on who is or isn't manly enough, using words that "have been co-opted from pornography."

Lopez says it is often used to insult "liberals or other Americans who are being 'cucked' or 'cuckolded' by other cultures — immigrants or refugees — who are coming and invading the U.S., and basically and taking over the culture."

Following that same logic, a "cuckservative" is a conservative who doesn't hold alt-right views on race and immigration.

Masculinist and The Proud Boys

On the other end of the spectrum is a "masculinist," which is the opposite of a feminist, and refers to an advocate of men's rights and chauvinism.

The Proud Boys, founded by Vice Media co-founder Gavin McInnes, is a fraternal organization that espouses masculinist views. Part of its initiation process includes an oath swearing ceremony in which newcomers "refuse to apologize for creating the modern world." McInnes frequently talked about his masculinist views on his Web-only talk program, The Gavin McInnes Show, which apparently had its last episode on Aug. 23.

He has denounced the alt-right, writing, "We openly encourage Jewish and non-white members and want them to know they're at home with us" and that "All white nationalists / anti-Semites are banned from Proud Boys." The "tenets" of the group, though, according to the Proud Boy Magazine website, include "closed borders," "anti-racial guilt" and "reinstating a spirit of Western chauvinism."

According to the FBI, a "ghost skin" is someone like Deputy David Gay or Sgt. Greg Palm: Both men had worked their way up the chain in their respective law enforcement jobs in Williamson County, Texas, while also surreptitiously serving as members of the KKK, according to the county Sheriff's Office.

"One white supremacist group has reportedly encouraged ghost skins to seek positions in law enforcement for the capability of alerting skinhead crews of pending investigative action against them," the report said.

In the case of Gay and Palm, both were fired in 2001 after allegedly attempting to recruit a colleague to join the KKK.

It is not unusual to hear "elite" flung about as a pejorative, implying that someone runs in such exclusive circles that they are out of touch with "common/real" people of the country. But a fiery White House press briefing exchange led to discussion of the long and ugly history of the word "cosmopolitan."

Almost immediately after White House adviser Stephen Miller accused CNN's Jim Acosta of having a "cosmopolitan bias" on Aug. 2, the Internet unearthed the word's decades-old significance. In his book Hitler: Ascent, 1889-1939, author Volker Ullrich defined it as an anti-Semitic term "used against the Jews by Nazis and Bolsheviks alike" who were "considered not only cosmopolitan, but also rootless, and in the late 1940s the term became a code word for Jews who insisted on their Jewish identity."

This is not to say that was the intention of Miller, who is Jewish. But among thealt-right, it is a term used to suggest a person travels in academic circles, the arts and likely lives in urban centers, as Politico notes.

This is where it gets a little meta, but essentially, file these in the "hoax" bin. That's the advice of Whitney Phillips, author of This Is Why We Can't Have Nice Things: Mapping the Relationship Between Online Trolling and Mainstream Culture.

It is not that they are devoid of meaning or should be ignored, but on their own, these are benign symbols that have been reappropriated by the Internet's white nationalist troll army and given a new, fake and racist meaning. After using the terms in a new way, trolls then sit back and LOL over the frenzy of outrage that ensues. This, ironically, helps give the symbols real meaning.

The problem, Phillips said, is that coverage of the people and groups behind these "hoax" terms, even if it is to expose them as false, "still amplifies what it is they're doing and what it is they hope to accomplish. And in the process it helps normalize their cultural visibility."

What Pepe The Frog's Death Can Teach Us About The Internet

So what is each supposed to mean?

Milk: The use of milk as a signifier of white supremacy was popularized in the bowels of the online forum 4chan after an anonymous poster shared a graphic study in the science journal Nature, showing "Lactase hotspots," where certain populations that can trace their ancestry to Europe have higher milk tolerances.

"OK" hand gesture: The Anti-Defamation League traced the origins of the "OK" sign earlier this year to a fake racist meme also born on 4chan.

The campaign was initially launched as "Operation O-KKK." The anonymous mastermind told other members on the site, "we must flood Twitter and other social media websites...claiming that the OK hand sign is a symbol of white supremacy." The user explained it would be easy to convince leftists that the letters "WP" — which in this case, would stand for White Power — could be traced within the OK gesture.

"Leftists have dug so deep down into their lunacy," wrote the poster, "We must force [them] to dig more, until the rest of society ain't going anywhere near that s***."

I'm eating Asian food, drinking milk, not looking you in the eye AND doing the OK sign.

Avoiding eye contact: Oxford University apologized in April to incoming students for handing out literature that said avoiding direct eye contact could be a type of "racial micro-aggression." It described the behavior as "subtle, everyday racism," which can be alienating. In its apology, the university acknowledged the criticism that such a policy could be discriminatory in a different way, including to people with autism.