People And Animals, 'Falling And Flying,' Make For A Hypnotic Read

People And Animals, 'Falling And Flying,' Make For A Hypnotic Read 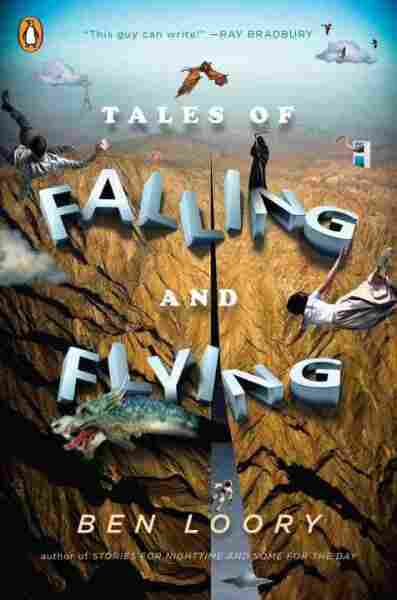 Tales of Falling and Flying

Here's a useful rule of thumb: If one of your friends says "I've got to tell you about this weird dream I had last night," run. Otherwise you're in for the most boring ten-minute story you've ever heard, punctuated with phrases like "It was, like, my house, but not my house, you know?"

There are, of course, exceptions. If Ben Loory wants to tell you about a dream he had, for example, pull up a chair. The stories in his new collection, Tales of Falling and Flying, are dreamlike in the best possible way: both cheerfully surreal and cosmically unsettling. It's a strong sophomore effort from an author who's known for his wild imagination and off-kilter sense of humor.

The collection opens with "The Dodo," about a bird who died in the extinction of his species, but somehow came back to life. No one believes he's a dodo, though, and he's forced to pretend he's a chicken. "He got pretty good at going bok-bok-bok-bok, and bobbing his head back and forth," Loory writes. "It wasn't a very interesting existence, being a chicken, but it was better than being laughed at and scorned. And, in time, the dodo was very good at it. He even won a few awards."

The dodo's facade is unsustainable, and it doesn't take long for things to come to a head. The story is over in four pages — there are 40 stories in Loory's collection, and most of them are just a few pages long, little micro-fictions with simple sentences and no wasted words. These are hypnotic stories, and it's hard to resist the urge to instantly re-read each one.

These are hypnotic stories, and it's hard to resist the urge to instantly re-read each one.

The cast of characters in Tales of Falling and Flying form what's essentially a bestiary — humans do make appearances, but so do several animals, both real and fictional. In "The Squid Who Fell in Love with the Sun," the titular cephalopod is scorned by his fellow squids for being deformed. He starts to avoid his tormentors, and ends up obsessed with the sun, which "looked to him like the greatest thing in the world."

So the squid designs a spaceship: "He designed and built the world's first dark matter and energy reactor. It took a lot of time and about a thousand scientific breakthroughs." The ending of the story is beautiful; Loory has a gift for making the reader feel for all of his characters, whether they're human or sea creatures. Impressively, he does it without ever approaching the mawkish or the twee.

While most of the stories in Loory's collection are dreamlike, he also draws inspiration from the nightmarish. In "The Telescope," a man goes on a date with a woman, but is creeped out by a telescope in her apartment, which he thinks she uses to spy on others. He stops returning her increasingly desperate calls, and the result is horrifying. It's a dark story, unforgettable and scary as hell.

Loory takes wild premises and turns them into straightforward tales with no hint of irony; he never seems impressed by his own cleverness.

Similarly chilling is "The Ambulance Driver," in which the title character is rushing a person to the hospital and accidentally hits a young boy, who dies from his injuries. "It wasn't your fault," her friends tell her. "It was a terrible accident. It could've happened to anyone. Take some time off. It'll all be okay." The story ends somewhere between deliverance and terror; it's shocking, but oddly beautiful.

Most of the stories in the book, however, are sweet and triumphant, with characters rewarded for their virtue. In "The Sloth," Loory imagines a mammal discontented with his life of hanging out and eating leaves. "I think I'm gonna get a job," he tells his nonplussed friends. The search for work is harder than he thinks, but eventually, he takes matters into his own toes, and finally finds happiness. It's a deceptively simple story, and it works the same reason all the other stories in the collection do — Loory takes wild premises and turns them into straightforward tales with no hint of irony; he never seems impressed by his own cleverness.

He is, however, a very impressive writer. The stories in Tales of Falling and Flying are mesmerizing and magical, and Loory has a boundless imagination. He's also a deeply compassionate author — the world he's envisioned with this book is one that rewards kindness and inclusivity. It's a stunning book that's perfect for oddballs, outcasts or, really, anyone who wants to escape to another, better world, if only for a few hours.