Accessibility links
'It' Happens, Again And Again And Again Stephen King's tale of a shape-shifting clown that haunts a small Maine town gets an adaptation that features fine performances but relies on a barrage of repetitive jump scares. 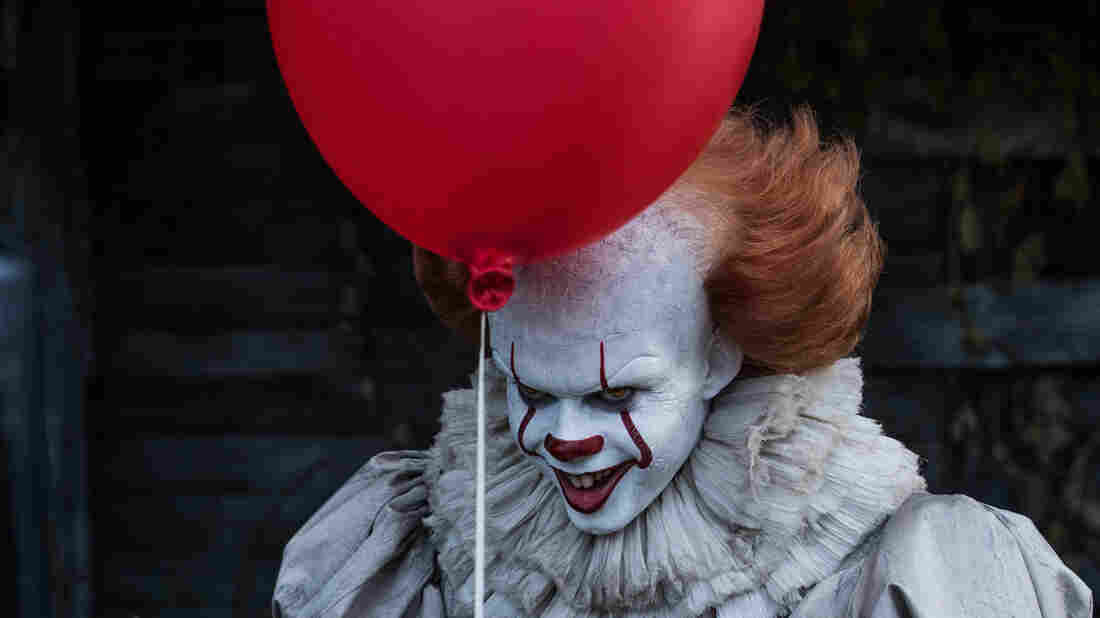 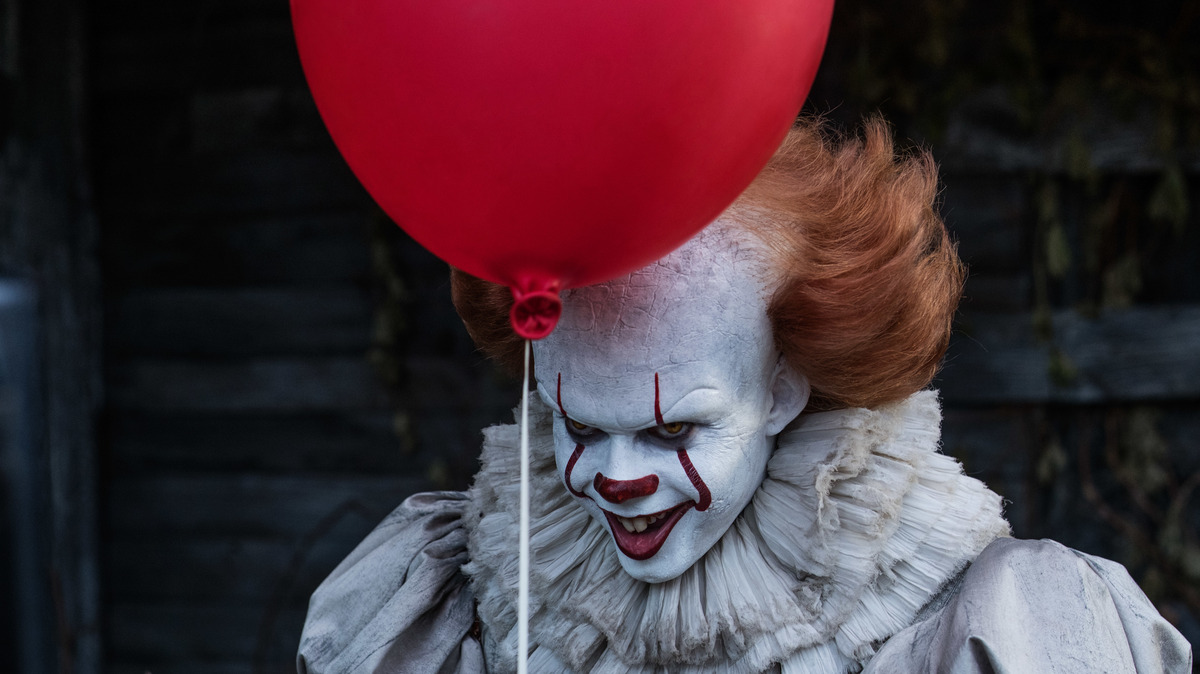 One luftballon down, 98 to go: Bill Skarsgård stars as Pennywise in director Andy Muschietti's horror thriller It.

In the best Stephen King adaptations — and the best Stephen King novels, for that matter — there's precious little daylight between the psychic stress of the characters and the supernatural forces that torment them. Carrie, The Shining, The Dead Zone, Christine: All are defined by the frightening intimacy of terrors that come from within, rather than external forces that can be vanquished like a priest exorcising a demon or ghosts expelled from a haunted house. It's usually a mistake to focus too much on re-creating the gonzo horror set pieces in King's books because it risks untethering the story from the core personal anxieties that serve as its engine. (Something King himself often does in his weaker third acts.)

King's 1986 magnum opus, It, is about a deranged serial murderer clown named Pennywise that haunts the children of Derry, Maine, from a byzantine network of sewage tunnels under the pavement. Pennywise isn't a flesh-and-blood killer, but a malleable entity that takes the form of a child's worst fears, turning each victim into an unwitting creative partner. It isn't a book about scary clowns, but a chilling articulation of what it's like to grow up with ordinary fears (like the onset of puberty and sexuality) and extraordinary fears, (like a legacy of neglect, abuse, poverty, and violence).

The question hanging over director Andy Muschietti's new It is how much of a presence Pennywise has in the story — and, most importantly, what kind of a presence he — well, It — has. Is this a full-on scare machine about a sinister clown or a coming-of-age piece in the guise of one? The good news is that Muschietti has given himself the real estate to cover a substantive chunk of King's 1,100-plus page footstool of a novel: At 135 minutes, It covers only the childhood half of the book, leaving the adult versions of the same characters to return in the sequel, set 27 years later. He also gets terrific performances from his young cast, who look as much like the stars of tomorrow as River Phoenix and his buddies did in Stand By Me, Rob Reiner's curdled nostalgia piece, based on King's novella The Body.

Yet Muschietti can't resist making Pennywise the star and the barrage of evil-clown manifestations has a diminishing effect on the film as it trudges along. It's a simple case of mathematics: There are seven kids in "The Losers Club," the adolescents who square off against Pennywise, and all seven require their own individual hauntings, on top of the multiple times they try to confront the threat as a group. That adds up to a relentless succession of nerve-shredding sequences, but the effect is fatiguing over the long run and does a disservice to the children and the town that summon this beast from the depths.

Shifting the timeline of the book forward three decades, It opens in 1988 with a little boy in a yellow rain slicker chasing a paper boat to the gutter, where the mirthless Pennywise awaits to snatch him. Children have gone missing at an alarming rate in Derry, and the boy's older brother, Bill (Jaeden Lieberher), a sickly adolescent with a stutter, takes it upon himself to solve this mystery. In this mission, he is joined by his outcast friends Richie (Stranger Things' Finn Wolfhard), Stanley (Wyatt Oleff), and Eddie (Jack Dylan Grazer), and three others — Mike (Chosen Jacobs), an African-American orphan whose parents died in a mysterious fire; Ben (Jeremy Ray Taylor), an obese bookworm who is new to town; and Beverly (Sophia Lillis), a lonely girl who cowers from her sexually abusive father.

Much like their odds against Pennywise, the seven kids are stronger together than apart, with a dynamic forged on crude jokes and innuendo and the unique bond that forms among children in retreat from abuse at home and in school. And Muschietti does well to capture the pulsing menace of Derry itself, a town that lives under the imposing shadow of its own violent history — one it seems powerless to keep from perpetuating, one generation to the next. Bill and his friends are battling Pennywise, but they're also fighting the dark inevitability of turning into their parents, or making it into adulthood alive.

Those themes survive the mayhem that pops up with metronomic regularity, but just barely. Muschietti (Mama) favors the hyperaggressive style of modern spookfests like The Conjuring, and the overall effect is to turn It into a carnival funhouse of ear-splitting shrieks and spring-loaded jump scares. With so many characters and such a long running time, the film feels like The Avengers of blockbuster horror films, a smorgasbord of shocks that trades maximalism for ambiance. In this case, less might have been more.

A previous version of this story incorrectly said the movie is set two decades later than the novel was. The film is actually set three decades later.