Accessibility links
Flamingos In The Men's Room: How Zoos And Aquariums Handle Hurricanes When you're building a zoo disaster plan, there's one thing to keep in mind: If anything can go wrong, it will. 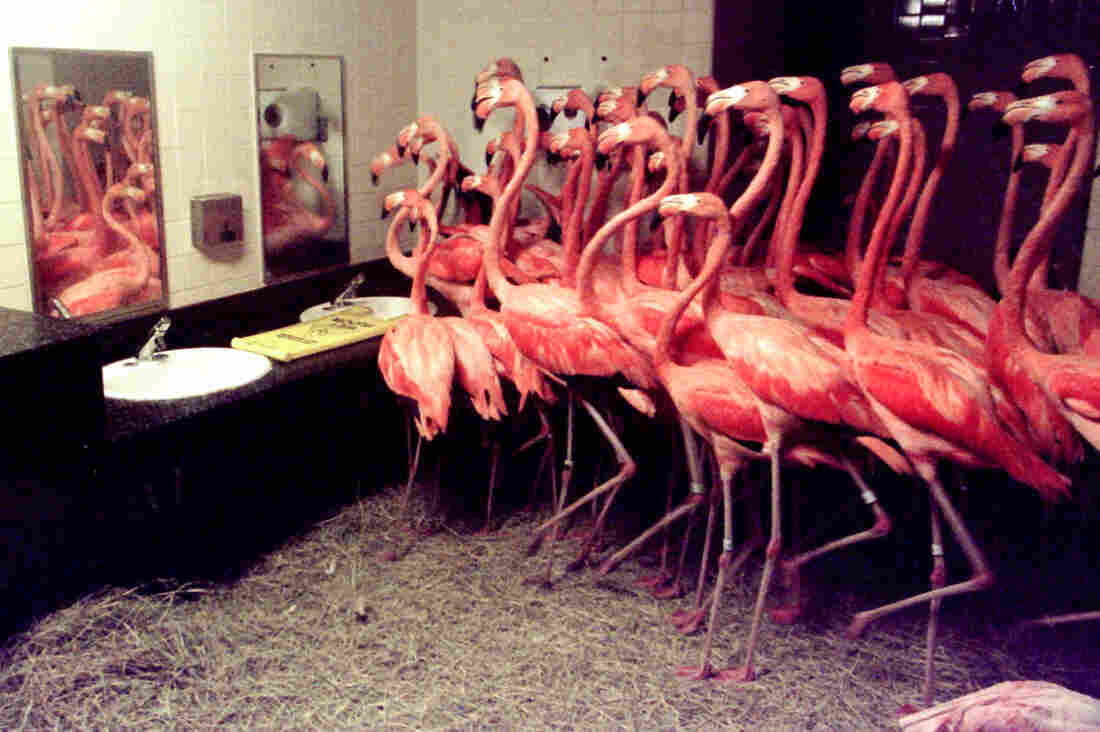 More than 50 Caribbean flamingos take shelter in a men's restroom at the Miami Metrozoo (now Zoo Miami) on Sept. 25, 1998. Zookeepers rounded up the birds to protect them from the effects of Hurricane Georges. This was not the first time the zoo had to corral flamingos in a restroom. They were also in there during Hurricane Andrew, six years earlier. Max Trujillo/Getty Images hide caption 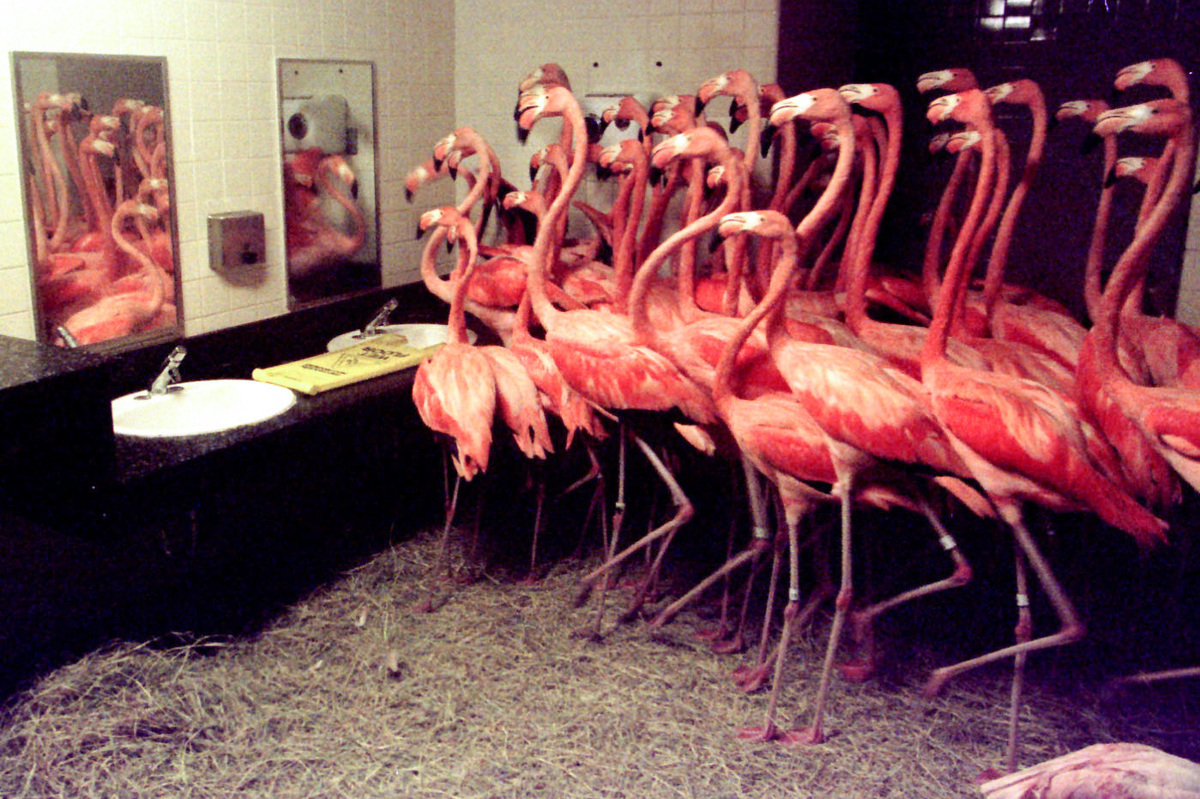 More than 50 Caribbean flamingos take shelter in a men's restroom at the Miami Metrozoo (now Zoo Miami) on Sept. 25, 1998. Zookeepers rounded up the birds to protect them from the effects of Hurricane Georges. This was not the first time the zoo had to corral flamingos in a restroom. They were also in there during Hurricane Andrew, six years earlier.

When you're building a zoo disaster plan, there's one thing to keep in mind: Murphy's law. If anything could go wrong, it will.

Just ask the flock of flamingos that weathered Hurricane Andrew in a public restroom at Zoo Miami in 1992.

Here's What You Need To Know About Hurricane Irma

Or you could ask the zoo personnel across the coast who've been running emergency drills since the start of hurricane season.

The Association of Zoos and Aquariums, which represents more than 230 animal care facilities in the U.S. and abroad, requires all of its members to practice an annual disaster preparedness drill to keep their accreditation. And many facilities review or update their protocols every year, including Zoo Miami, which is now buckling down as Hurricane Irma approaches Florida.

The skeleton of a zoo disaster plan is similar across the board: Staff members remove loose debris from the park, tarps and signs are taken down, generators and gas tanks are prepped. Cleaning supplies and food for animals and staff are stockpiled in advance — basically anything the zoo can prepare to operate without any outside assistance.

Facilities will also often choose members of a ride-out crew: select facilities staff, animal nutritionists and other key team members who will bunker at the zoo through the storm. Lee Ehmke, CEO of the Houston Zoo, says 15 team members stayed on the first night of Hurricane Harvey last month.

"We were sleeping here at the zoo, on cots or on the floor," he says. "We prepared food so everyone was fed ... There was a lot of radio and Internet communication to make sure the right diets were given to the animals."

Backups for your backup

"We don't necessarily say, 'Here's the plan, just insert your name here,' " he says. "We definitely have guidelines, but we leave it up to each facility to come up with their own plan because each one is unique."

Rich Toth, vice president and managing director of downtown facilities at the Audubon Nature Institute, says they have several tiers of energy at the ready — including primary power, secondary power and backups for the backup.

And because the Audubon also oversees an aquarium, which faces different challenges than its zoo in disaster situations, it needs those extra safety nets. 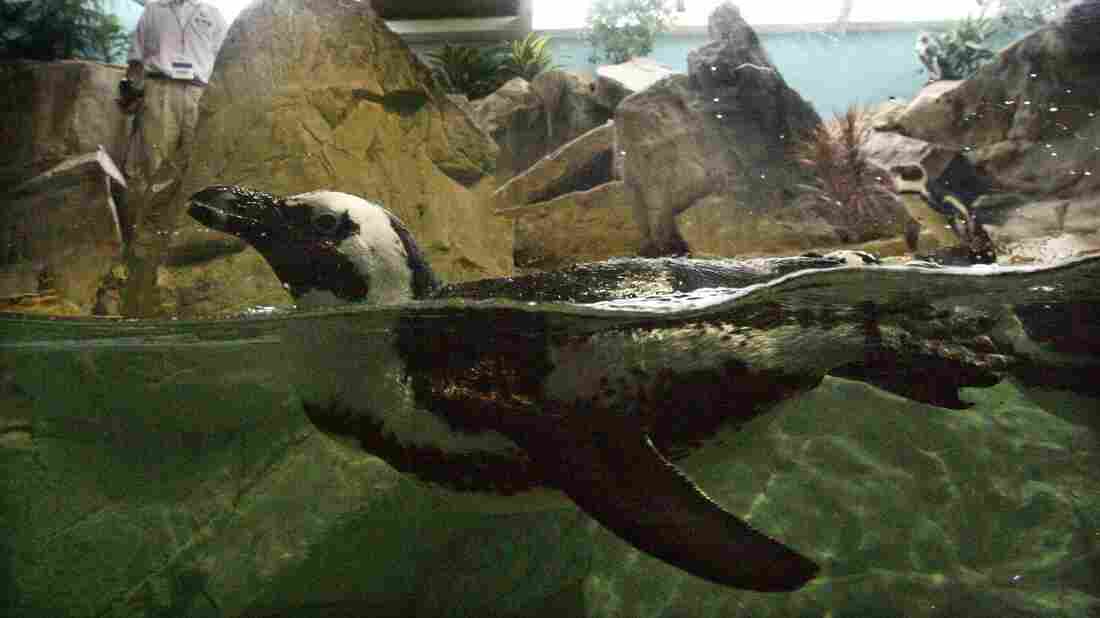 A penguin rescued in the aftermath of Hurricane Katrina swims in its old habitat in the Audubon Aquarium of the Americas on May 22, 2006, after returning to New Orleans following an eight-month refuge in California. Mario Tama/Getty Images hide caption 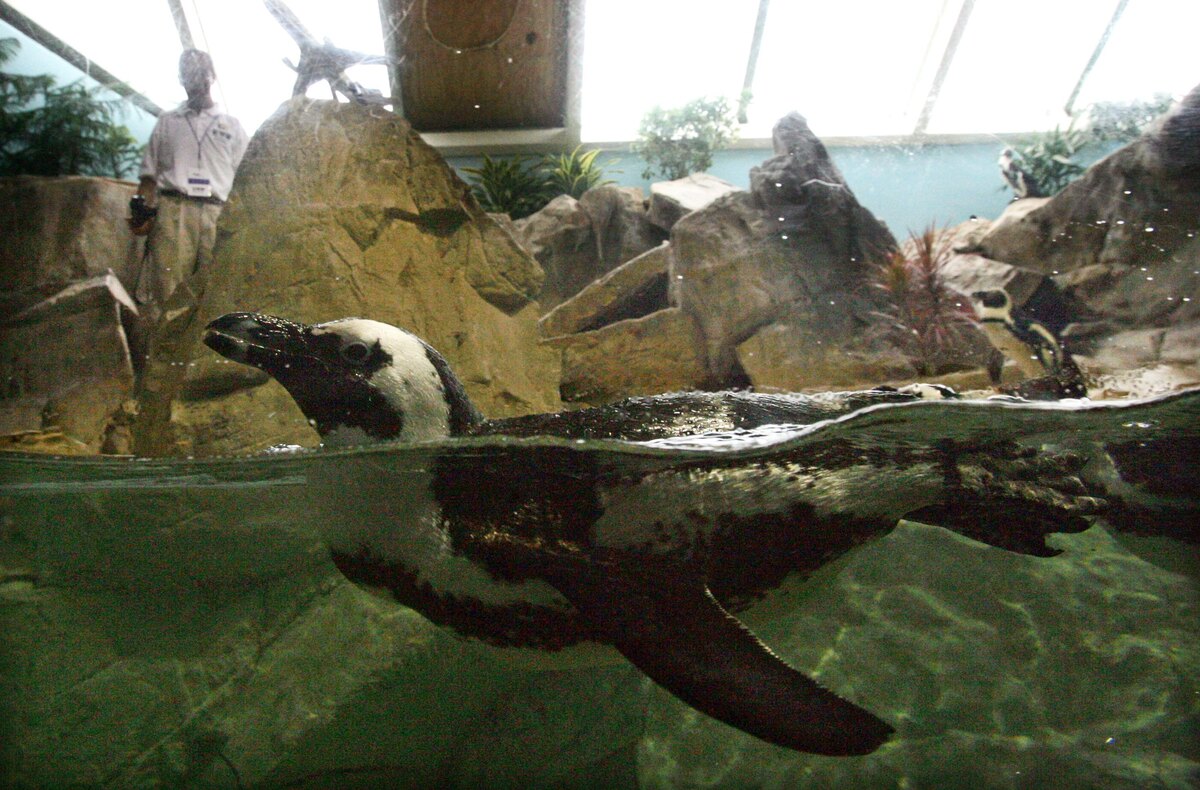 A penguin rescued in the aftermath of Hurricane Katrina swims in its old habitat in the Audubon Aquarium of the Americas on May 22, 2006, after returning to New Orleans following an eight-month refuge in California.

When Hurricane Katrina hit New Orleans' Audubon Aquarium of the Americas in 2005, it knocked out the emergency generator, killing a large portion of the aquatic collection.

"While we did have some fish make it, the animals that made it were almost all our air-breathers, if you will," Toth says. "So our bird collection, including our penguins. Our sea otters were fine. Our large green sea turtle."

He says staff members were able to pack up and temporarily relocate those animals to other AZA zoos and aquariums after the storm passed, but it's tougher when you're dealing with fish. For one, water is heavy — but also, a fish's respiration and bodily functions greatly depend on the water it's already in. So, for the most part, it's best to just try to weather the storm in-house.

"We are never going to evacuate"

In preparation for Hurricane Irma this week, Zoo Miami's plan is to stay put, too, says communications director Ron Magill. The reasoning, in part, is because the path of hurricanes can change quickly, and transporting an animal could actually mean moving it into more danger.

He says the stress of evacuating alone can be enough to kill an animal. Instead, the birds and small mammals of Zoo Miami will ride out the storm in independent kennels or buildings. The larger residents, particularly the carnivores and great apes, will stay in their usual indoor holding areas.

Florida Prepares To Evacuate Residents Ahead Of Hurricane Irma

Florida Prepares To Evacuate Residents Ahead Of Hurricane Irma

The zoo has reserved in advance a freezer and refrigerator truck, a practice it picked up after Hurricane Andrew blew away its walk-in freezers and refrigerators, Magill says.

That element of adapting is key when preparing for disasters at animal care facilities — learning from past surprises to better prep for the future.

Zoo Miami's former aviary, Wings of Asia, for example, was decimated by Hurricane Andrew, despite the staff's prior preparation.

"Although the netting for that aviary was tested for 150 mph winds," Magill says, "it was not tested to be able to withstand the impact of a mobile home that was picked up in those winds and launched into the aviary like a torpedo."

Wings of Asia was where Zoo Miami took its greatest losses during Hurricane Andrew, which killed nearly 100 birds. Throughout the rest of the zoo, Magill says, only five animals died.

In the aftermath of Hurricane Harvey, several zoos and aquariums reportedly brought supplies and aid to facilities that were heavily affected by the storm — including the Texas Zoo in Victoria.

Officials from the Houston Zoo, Zoo Miami and the Audubon Nature Institute confirmed that kind of collaboration is common in the community.

"The AZA-accredited facilities in particular are a very big family," Vernon says. "It's incredible to see people willing to drop everything and come down to Texas and help in any way they need it."

But that community extends beyond ensuring the welfare of their animals. A major priority for zoos after natural disasters is their staff members, some of whom might have lost everything in the storm or flooding.

"Many of them did have significant damage or may have actually lost their homes in the flood," Ehmke says, "including a number who spent time here helping take care of the animals and the facility while their personal belongings were in danger."

"We're going to do what we can to assist our employees as we get a clearer picture of the extent of their losses," he says.

In response, the AZA has set up a Hurricane Harvey Relief Fund across its network to raise money for employees and their families affected by the storm and flooding. Vernon says the organization will likely establish a similar fund after Hurricane Irma, should it hit any AZA facilities.

"We became a better zoo"

Looking ahead this week to Hurricane Irma, Magill says it unfortunately isn't Zoo Miami's first rodeo. But having survived previous disasters, he is confident the zoo and its animals will come out OK.

"For a lot of people — and I'm speaking for myself in Andrew — the zoo became almost a haven for us," Magill says. "We became a better zoo. And as bad as this storm looks, I know we'll be able to make it through this also."