Accessibility links
New Season Of 'Outlander' Is So Much More Than A Hunky Face (And Rock-Hard Abs) On the eve of Outlander's third season, Pop Culture Happy Hour has thoughts on the Starz drama and its depictions of sex, intimacy and time travel. 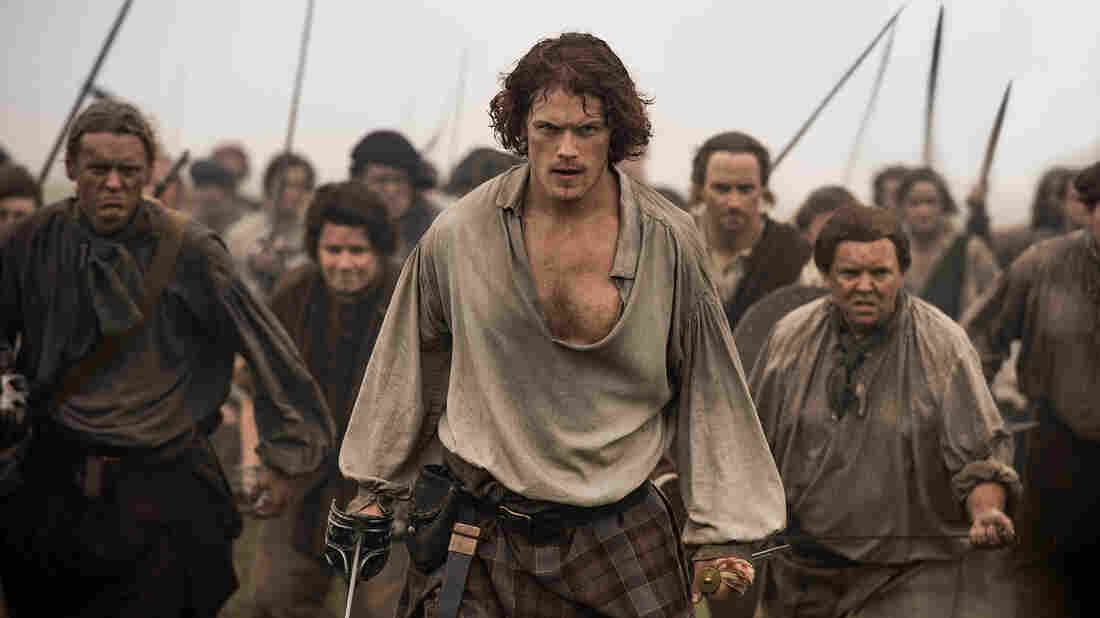 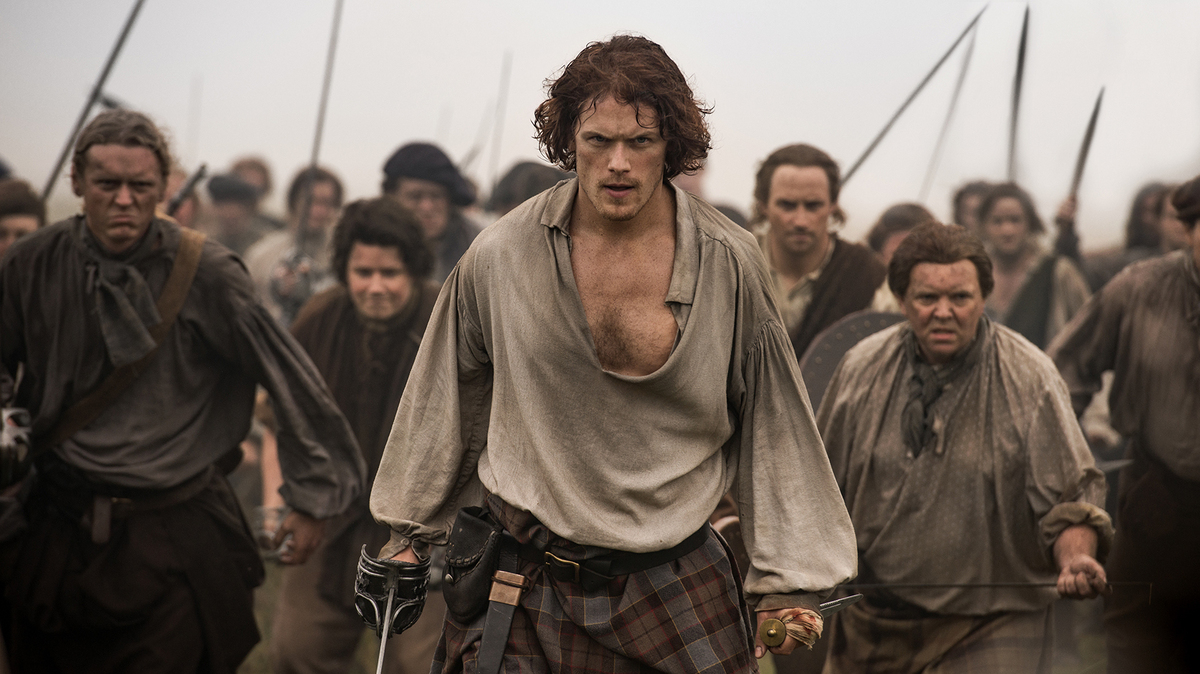 [Warning: This essay — and this episode of Pop Culture Happy Hour — contains references to sex and assorted body parts, as well as spoilers about the first two seasons of Outlander. Proceed with caution.]

I've never been much for that old trick of hiding the romance novel with the heaving bosom on the cover inside a college textbook: I read my romance loud and proud. It pains me that storytelling that traffics in romance and human sexuality is often dismissed as trivial. Outlander, the Starz network's historical romance — based on the Diana Gabaldon book series — runs the risk of this slight even when its delicious lead characters are fully dressed. (We are talking about cheekbones that are positively obscene.) But tucked inside Outlander's salacious exterior is an intelligent, well-acted drama about the nature of love and intimacy, with an often radical position on sex.

The setup for Outlander is simple. (Ha! No, it's not. It is, in fact, impossible for me to verbalize the plot without trailing off into giggles.) On vacation in Scotland with her husband, World War II nurse Claire Randall (Caitriona Balfe) visits a ring of magic stones and accidentally ends up transported 200 years earlier. Eighteenth-century Scotland is a perilous place: Claire is not dressed for it, but she is well equipped with brains and courage and luminous skin. Claire spends the first season trying to get back to her husband in the present, while falling for a red-headed lad named Jamie Fraser. It must be noted that Jamie Fraser (Sam Heughan) is so ridiculously hunky that I often find myself helplessly laughing whenever he smolders onto the screen. Add in his Scottish accent, which rolls r's that sound like velvet on a four-poster bed with a fire going ... it's absurd.

Whew! Onward. In the first season, the couple encounter a positively baroque collection of calamities at the hands of one Black Jack Randall, who is a distant relative of Claire's 20th-century husband, Frank (both characters are played ably and thanklessly by Tobias Menzies). Claire and Jamie rescue each other both physically and emotionally, get married — she has to, for protection! — and head off to Season 2, where they use Claire's knowledge of the future to attempt to change history. They sail to Paris to prevent the disastrous battle of Culloden, the final battle of the doomed Scottish Jacobite uprising (on this show, we are Team Scots, obvs). After yet another disastrous series of events in Paris including a whole lot of sexual assaults and the loss of Jamie and Claire's baby, they give up and head back to Scotland to try another history-changing strategy, which also fails. In order to protect Claire, who is pregnant again, Jamie sends Claire back to the magical stones and home to the 20th century and Frank. Claire arrives back at home in her own age — barefoot, pregnant and bigamous. It's awkward.

That summary doesn't at all do justice to the intelligence of the series, especially around issues of sex and relationships. The sex is both hot and intimate, and it's not always screwing for screwing's sake, though it doesn't shame its characters for that, either. Physical intimacy advances character development rather than checking a prestige-television boobs box. Claire and Jamie have a real relationship, and their connection is more than chemistry; it's the work that goes into any couple's emotional and sexual life. Another departure from your regular TV sex stories involves the treatment of sexual violence. While it takes place at an almost Game of Thronesian level in the series, it occurs in thoughtful and often surprising ways, and leaves its victims with real emotional scars, rather than the erasure that can be the hallmark of rape stories on television.

Season 3, which premieres Sunday, lands Jamie and Claire in what might be the worst predicament yet: centuries apart. Of course, the story is at its best when they're together. But following both of them through the intervening years has its rewards. Claire and Frank gingerly trying to rebuild their marriage is dramatic and painful and beautifully acted. Outlander really sings when it's in Scotland, though — the supporting characters we've come to know and love are mostly there, and the story is just more interesting. Jamie's survival as a wanted man in Scotland, and his subsequent reinvention, is fraught with real complexity as he adjusts to life without Claire; plus, new characters like Lord John Grey (book readers, rejoice!) bring life to the early episodes. Also: Jamie's 18th-century reading glasses — need I say more?

But it's when Claire and Jamie finally connect again that the series does what it does best: emotional truth. They may look like no one you've seen in real life, but the intensity and awkwardness and understanding that exist in their relationship are easily recognizable to anyone who's ever been in love, even without the tedious complication of time travel. It's a romance, but it's not a fantasy. So go ahead — watch Outlander with pride. It's more than a pretty face (and buttock).