Accessibility links
Where Does The FEMA Funding For Harvey And Other Disasters Go? The initial multibillion-dollar federal response is only the beginning of what will be needed to recover from two major storms. Where does it all go? 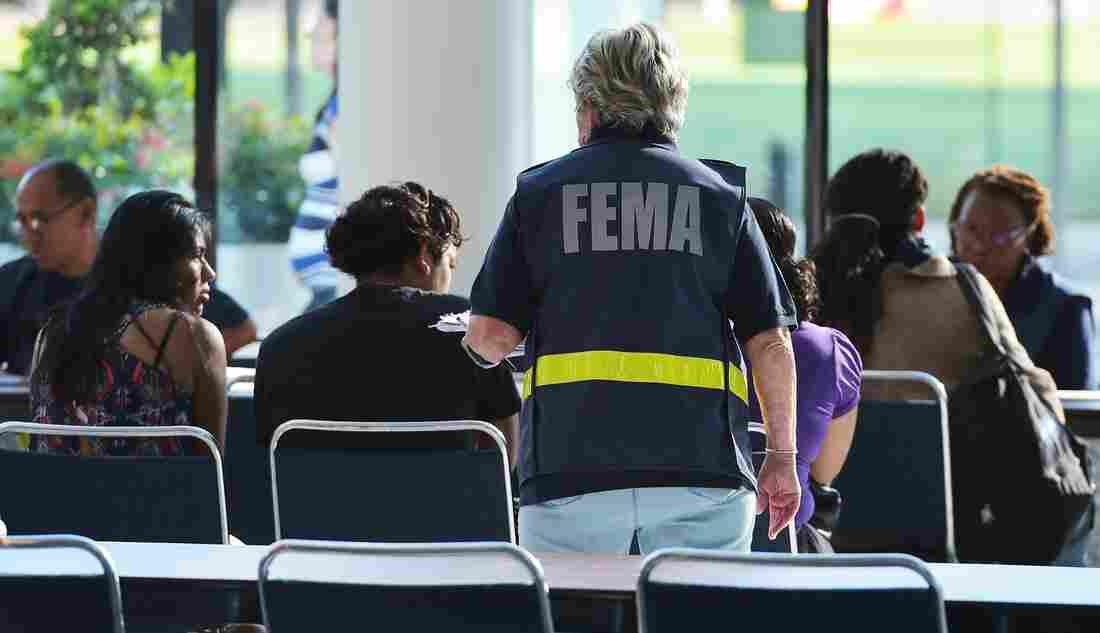 An official with the Federal Emergency Management Agency talks to people at Houston's George R. Brown Convention Center, which has been a shelter for evacuees from Hurricane Harvey, on Sept. 2. Mandel Ngan/AFP/Getty Images hide caption 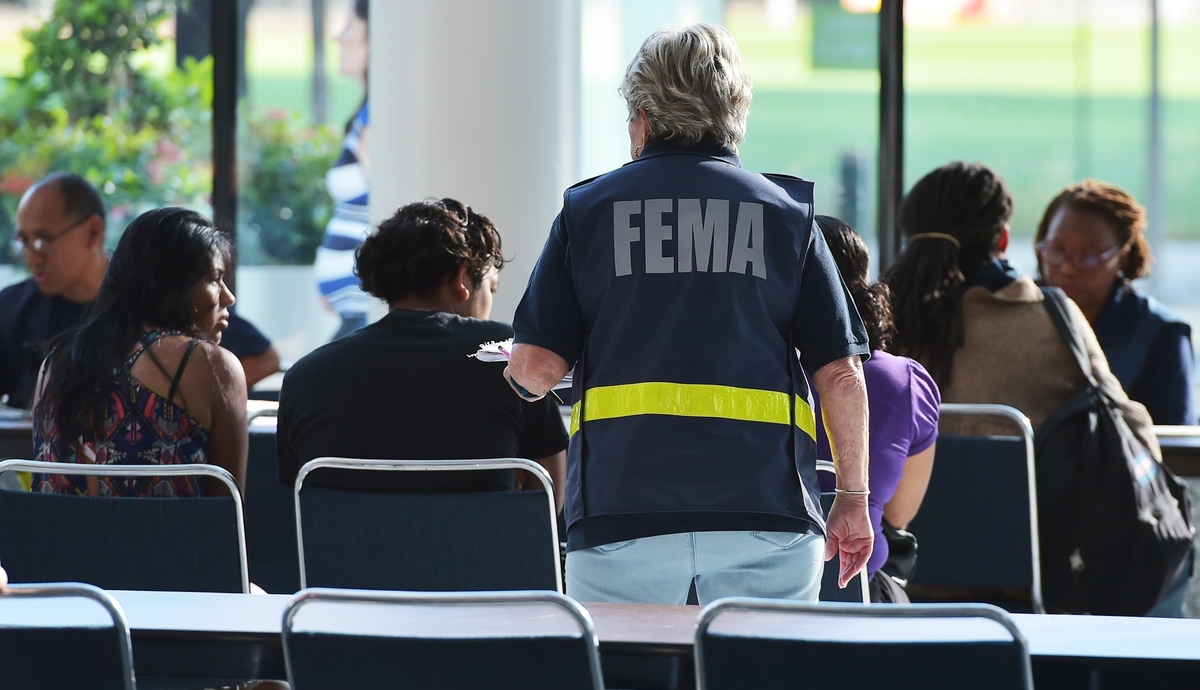 An official with the Federal Emergency Management Agency talks to people at Houston's George R. Brown Convention Center, which has been a shelter for evacuees from Hurricane Harvey, on Sept. 2.

The disaster relief bill given final approval by Congress on Friday can't come too soon for the Federal Emergency Management Agency. Without a new injection of funds, officials said FEMA's cash box would be empty as early as this weekend, right around the time that Hurricane Irma is scheduled to slam into southern Florida, while southeast Texas and Louisiana are still drying out from Hurricane Harvey.

The agency can "easily go through $200 million in a day," according to Elizabeth Zimmerman, a former associate administrator at FEMA, "just gearing up, responding and being prepared for a disaster that's coming."

There is at least one more hurricane on the immediate horizon, and it isn't even the peak of the season yet. The agency is also providing funds to help fight wildfires in the West.

Here's What You Need To Know About Hurricane Irma

Zimmerman says FEMA's disaster relief fund is an annual appropriation of roughly $6 billion. It's based on a rolling average of disaster costs over the last 10 years.

That's likely to be just the first drop in the bucket. Harvey is projected to cost as much as $180 billion.

Where does all that money go?

FEMA has already paid out some $150 million to households. People needing immediate cash for food or shelter can get $500 deposited into their bank accounts. The agency will also make grants for home repairs, with a maximum of $33,300, although Zimmerman says the average grant is closer to $3,000 to $4,000. FEMA also pays for hotel and motel rooms. Plus there are the millions of meals and liters of water the agency has provided.

The money passed by Congress includes funds for storm survivors who qualify for low-interest loans to repair their homes through the Small Business Administration, which also lends money to, yes, small businesses.

Down the road, communities can also seek FEMA money to pay for things like firetrucks or community centers that have been damaged or destroyed. In fact, FEMA is still making grants for previous years' disasters, like Hurricane Sandy.

Lessons learned from past disasters

FEMA has learned from its experiences with past storms, says Gary Webb, professor and chair of emergency management and disaster science at the University of North Texas. "The most significant improvement is that FEMA has become a more nimble agency," he says, in terms of positioning assets such as food and bottled water before a disaster strikes. 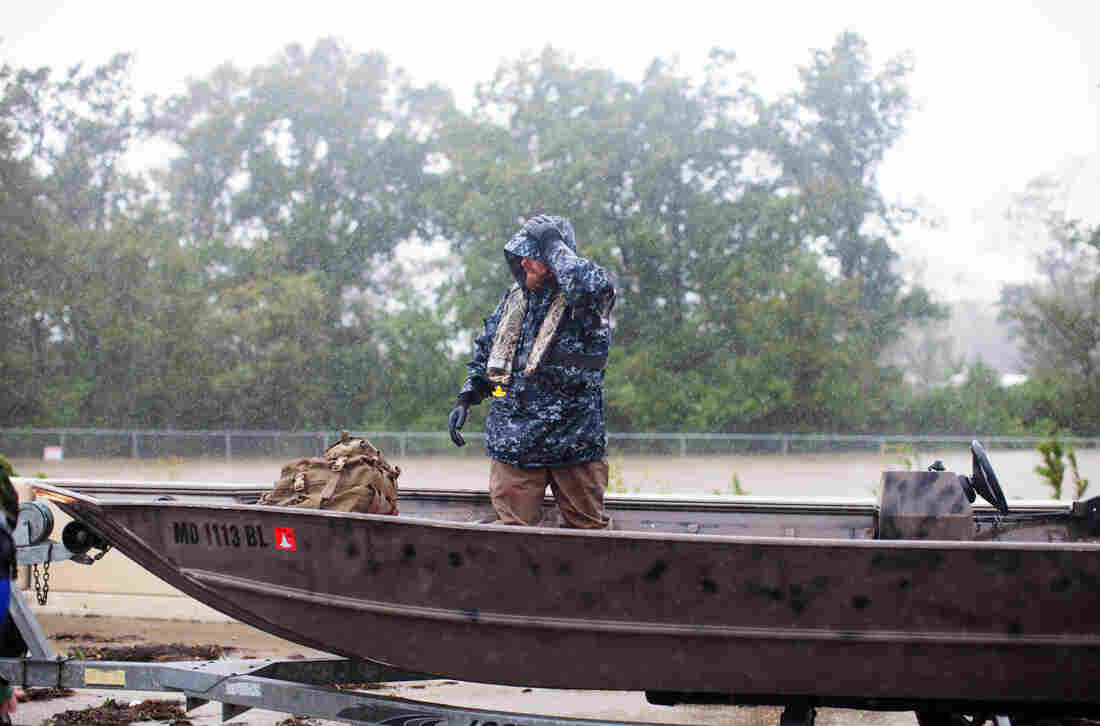 He gives the agency high marks for working with and encouraging citizen-led efforts such as the "Cajun Navy," the small-boat owners who took it upon themselves to travel to Texas from Louisiana and elsewhere to rescue flood-stranded residents of Houston and the surrounding area after Harvey.

He also says there are lessons to be learned from Harvey. Public officials need to "really think seriously about the evacuation decision-making process," Webb says, citing the conflicting advice given by state and local officials in Texas in advance of the storm.

Before And After: Dramatic Satellite Photos Show Texas Towns Underwater

With Irma hitting on the heels of Harvey, Webb says FEMA is faced with having to manage two very large natural disasters at the same time. He says the federal definition of a disaster is something that has exceeded the capacity of local governments to respond. A second major storm in a little over two weeks "tests our capacity to respond at the federal level. Instead of talking about a disaster," Webb says, "we may be talking about a catastrophe."

And former FEMA associate administrator Zimmerman says, "My heart goes out to my former peers," whose work this hurricane season has been nonstop.