Accessibility links
Using A Robotic Hand, She Wants To Throw Out The First Pitch For All 30 MLB Teams At 7, Hailey Dawson loves baseball and tossing out that first pitch. Poland syndrome made it a challenge but a robotic hand made it possible.

Using A Robotic Hand, She Wants To Throw Out The First Pitch For All 30 MLB Teams

Using A Robotic Hand, She Wants To Throw Out The First Pitch For All 30 MLB Teams 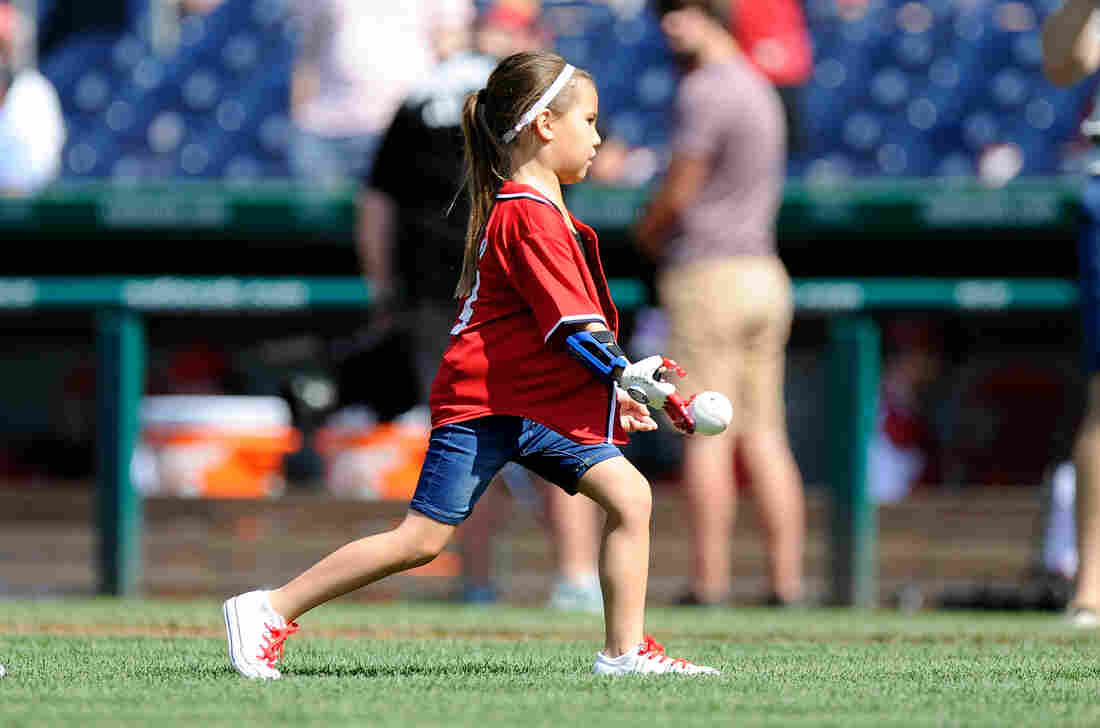 Hailey Dawson throws out the opening pitch with her 3D printed hand before the game between the Washington Nationals and the Texas Rangers at Nationals Park in June. Greg Fiume/Getty Images hide caption 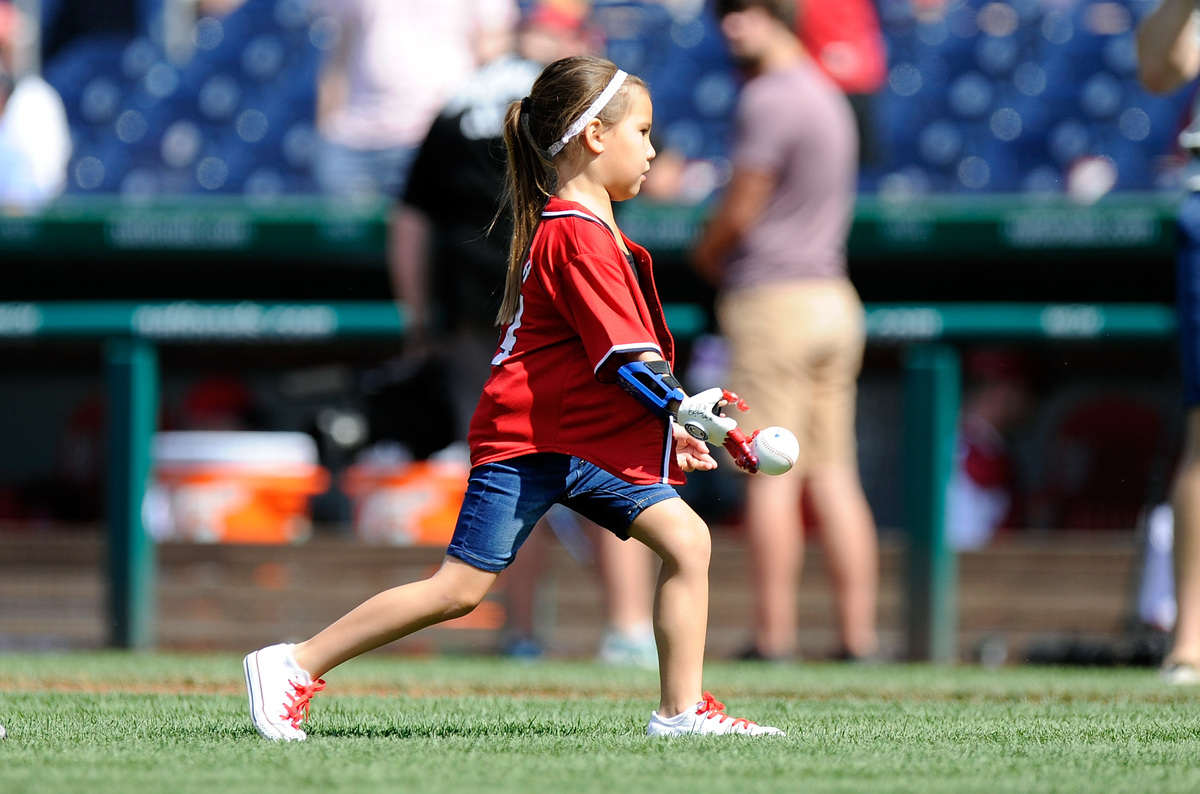 Hailey Dawson throws out the opening pitch with her 3D printed hand before the game between the Washington Nationals and the Texas Rangers at Nationals Park in June.

Hailey Dawson's favorite thing to do is throw out the first pitch at a baseball game, and thanks to a majority of all the MLB teams, she's going to be doing quite a bit of that in the future.

The first pitch seven-year-old Hailey threw out was at a University of Nevada, Las Vegas Rebels game. The UNLV engineering department had made it possible.

At the request of Hailey's mother, Yong, a group of researchers and students took on the challenge to create a 3D printed prosthetic hand for Hailey. As a result of being born with Poland syndrome, which leaves a pectoral muscle and other parts of the affected side underdeveloped, Hailey was born with a right palm, but not all of her fingers on that hand. The prosthetic hand the university created allows her to grasp objects, like a baseball.

"She just loves throwing that ball out and when she did it for UNLV it was amazing and she just hammed it up big time," Yong told MASN.

Yong said she was unsure of how to make her daughter's wish happen, but then decided to send a letter with a request. It worked and on Aug. 17, 2015, Hailey threw the first pitch for the Orioles game to her favorite player, Manny Machado.

"For her to be able to have a hand to actually hold something, where in the past she's never been able to, that's amazing," Yong said at the time.

"It was inspiring for me to watch the students when she first put that hand on and used it and what it meant to them," Yong said in the interview with MASN. "Not just what it meant to us, but to them to actually build it for her and for her to actually hold something. And they loved it, and I loved it."

Hailey's pitching didn't stop in Baltimore. She went on to throw out the first pitch for a Washington Nationals game in this June, after meeting Bryce Harper in Las Vegas and asking him if he could arrange for her to visit the park in Washington, D.C.

After she showed her pitching skills at the Nationals game, Bleacher Report produced a video about Hailey's story that got the attention of even more teams. Hailey's goal is to throw out the first pitch for all 30 MLB teams and as of Friday afternoon, Yong says 24 more teams have responded on Twitter saying they would love to have Hailey come for a game.

7-year-old Hailey Dawson wants to throw out the first pitch at every MLB ballpark with her 3-D printed hand pic.twitter.com/onStqhEzyB

In total, Hailey has seven different hands, including the custom ones she wore to the Orioles and Nationals games where she got to hang out with some of her favorite players, who she now refers to as her "buddies."

While Hailey is having a good time meeting some of her favorite players, Yong says she's glad this is also raising awareness for Poland syndrome and how accessible and affordable it is to get a 3D printed prosthetic. The robotic hand has also been a confidence boost for Hailey, who was once shy.

Mexico And U.S. Team Up To Create Low-Cost Wheelchairs

Because school just started and baseball season is closing out, Yong says the family will probably wait until next season to start visiting a lot of teams — but they could make an exception, say, for a World Series game.