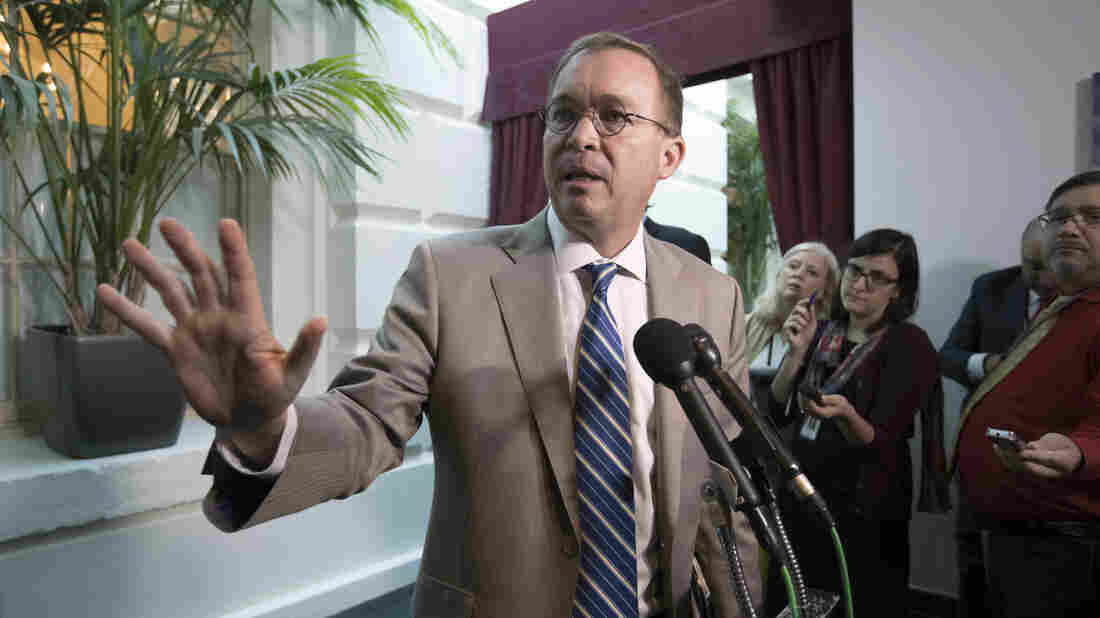 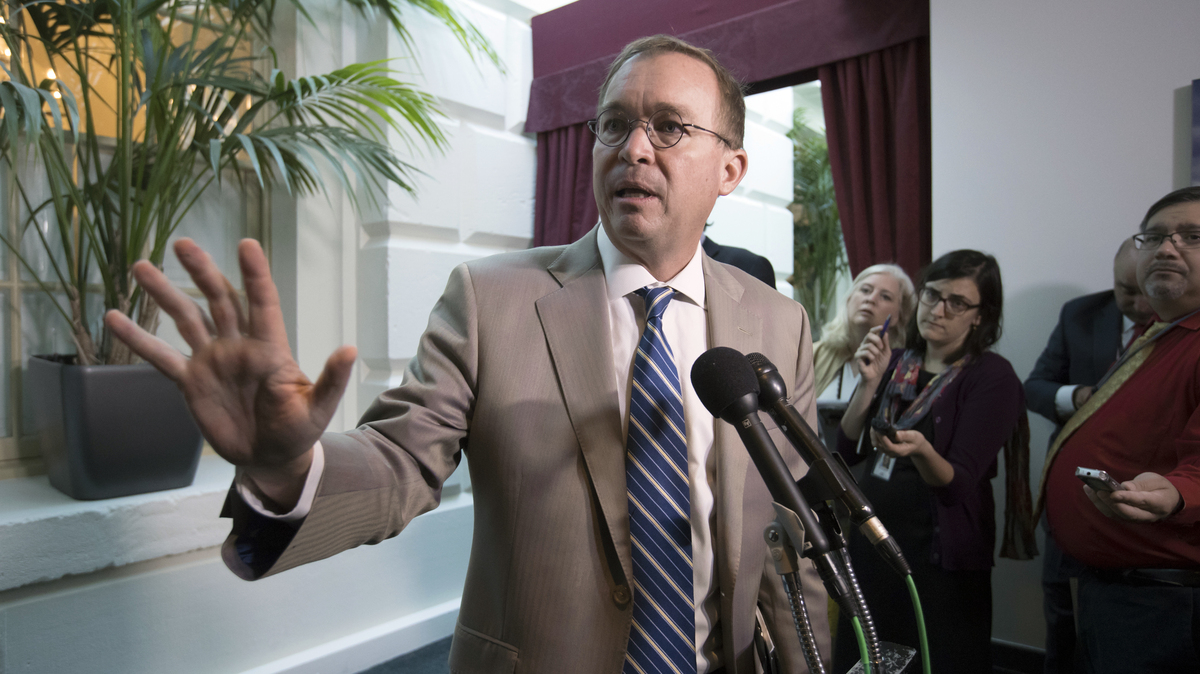 White House Budget Director Mick Mulvaney leaves a Republican strategy session in which he and Treasury Secretary Steven Mnuchin were blasted by lawmakers over President Trump's deal with Democrats.

House Republicans clashed repeatedly with senior Trump administration officials in a closed-door meeting Friday, according to interviews with more than a dozen lawmakers and GOP aides who were in attendance. During the hourlong meeting, Republicans expressed disbelief that President Trump chose to align with congressional Democratic leaders over House Speaker Paul Ryan and Senate Majority Leader Mitch McConnell on a short-term "clean" increase in the nation's debt limit and voiced frustration that they were given no assurances that it won't happen again.

The House passed the package — with mostly Democratic votes — on Friday morning, sending it to Trump for his signature. In addition to more than $15 billion in relief for areas affected by Hurricane Harvey, the deal also funds the government and raises the federal debt limit until Dec. 8.

Treasury Secretary Steven Mnuchin and Office of Management and Budget Director Mick Mulvaney came to Capitol Hill to build GOP support for the deal but were subjected to an hourlong venting session by House Republicans.

Rep. Joe Barton, R-Texas, pressed Mulvaney on whether he could promise Republicans that in the December round of budget talks, the White House would seek spending cuts linked to the next increase in the debt limit, a consistent demand from conservatives as the debt limit has become a political flashpoint within the Republican Party in recent years.

Mulvaney, who was a prominent fiscal hawk when he served in Congress, said he could not make that commitment. His answer was met with boos by GOP lawmakers. Barton, a Texan, voted "no" on the bill.

Rep. Lee Zeldin, R-N.Y., spoke in defense of the speaker, chastising Mulvaney and Mnuchin. He told them that the president's decision to undercut Ryan angered every Republican in the room and that future bipartisan deals need to start with Republicans.

Rep. Darrell Issa, R-Calif., took a jab at Mulvaney's flexibility on the debt ceiling, after years of holding firm on it in the House, by joking that he should hire 42 deputies at OMB to change his mind. The joke was in reference to the House Freedom Caucus, a group of hard-line conservatives who oppose clean debt limit increases and are increasingly and publicly frustrated at the lack of progress so far this year on the GOP's legislative promises.

Lawmakers said the senior White House officials offered little in the way of assurances. If anything, Mnuchin made an awkward closing statement asking lawmakers to raise the debt limit for him — as opposed to the president or for the sake of Harvey victims — and then left the meeting.

The comment did not go over well with Republicans. "I don't think it's anger. He just didn't hit it [the right note]," Brat said. "We got jammed on this."

Rep. Ryan Costello, R-Pa., told The Hill that Mnuchin's pitch was "about as well-received as his wife's Instagram post." She created an Internet uproar last month over a post, largely viewed as tone-deaf, regarding the couple's sizable wealth.

The legislation passed the House on Friday morning, 316-90. All of the "no" votes were cast by Republicans. Multiple GOP aides said they had been expecting a larger defection within the GOP over the deal. However, the meeting with Mulvaney and Mnuchin may have inadvertently rallied Republicans to vote "yes" as a show of support for the speaker but not for the president.

Freedom Caucus Chairman Rep. Mark Meadows, R-N.C., afterward tamped down reports this week of whisper campaigns about frustration with Ryan and the potential for leadership shake-ups. "There's no plan to change leadership. There's a concerted effort to try and make sure we get things done," Meadows said.

"If there was some kind of plan to change leadership, you guys wouldn't be reading about it or reporting about it if I was involved," he added.