Accessibility links
In 'Frankenstein Dreams,' Everything Is Possible — And Also Terrifying Michael Sims' anthology of Victorian science fiction explores the way Mary Shelley's classic novel Frankenstein fit the nervous energy of the 19th century and shaped the genre that came after it. 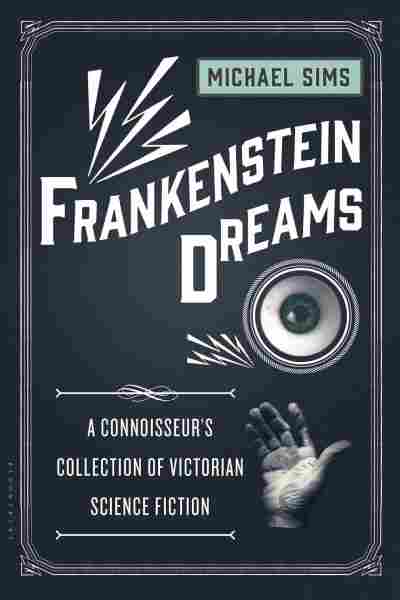 "I have the soul of an explorer, and in nine of ten cases this leads to destruction."

In 1835, a series of "scientific" articles appeared in the New York Sun describing recent revelations about the moon and its inhabitants — courtesy of developments in telescope technology. Public demand was so high that the Sun reprinted 100,000 copies. And though there was a healthy amount of skepticism, there were also plenty of true believers. It was the 19th century, after all; anything was possible now.

This is one of the early entries in Frankenstein Dreams, and it's a canny choice. For a story nearly two centuries old, it echoes clearly down the years: the faux reportage, the scientific affect of the narrator, the thrill of something newly discovered. It's modern enough that we know its descendants in contemporary science fiction, and just old enough that it reads as a product of its time.

That sense of the unfamiliar familiar seems to have been a guiding principle of this anthology. With the 200th anniversary of Mary Shelley's Frankenstein just around the corner, several upcoming releases will be illuminating that cornerstone of science fiction. (This book also has the obligatory excerpt from the novel.) But Frankenstein Dreams, an anthology of mostly-Victorian science fiction edited by Michael Sims — whose prior anthologies have tackled Victorian ghosts, detectives and vampires — is more interested in how that novel fits the wider scope of Shelley's century and shaped the genre after it.

The anthology collects stories from 19 authors (some classics, some obscure, all white as far as I can tell, five women), and seems to define science fiction as the speculative minus the supernatural. In a century so rocked with upheaval, nearly all the stories — even those with too-neat endings — have a certain nervous energy to their concerns: relationships, ownership, discovery, the veil between worlds. Everything was possible; also, everything was terrifying. No wonder many of the stories in Frankenstein Dreams involve innovation stretched to unsettling ends for obsessive characters — Edgar Allan Poe wrote "The Facts in the Case of M. Valdemar," in which mesmerism gruesomely suspends death, only a year before Ignaz Semmelweis was run out of medicine for the equally outlandish claim that doctors should wash their hands.

There was no shortage of obsessions for the era's fantasists to choose from. Grant Allen's "The Thames Valley Catastrophe," with its now-familiar disaster-movie cadence, reflects natural science as a national pastime; Alice W. Fuller's "A Wife Manufactured to Order" uses automatons as a casual backdrop for its feminist fable. These stories know the world's getting smaller — soon, they hope, we'll understand the shape of things. (Until you reach the mind, anyway; the psychology of obsession is a thread that ties nearly all these pieces together, and stories like Wardon Allan Curtis' "The Monster of Lake LaMetrie" and Rudyard Kipling's "Wireless" seem certain that the mind is made of much more unknowable stuff.)

And while several stories are familiar explorations of psychology and morality (see Strange Case of Dr. Jekyll and Mr. Hyde), some of the most interesting selections in Frankenstein Dreams aim for something more ambiguous. Ambrose Bierce's "Mysterious Disappearances" and Mary E. Wilkins Freeman's "The Hall Bedroom" offer creeping horror and no resolution, and rest comfortably alongside the contemporary weird. Not all the stories have aged so well — the casual pneumatic-tube futurism of Edward Page Mitchell's "The Senator's Daughter" envisions a future in which even though China has conquered America, white men still have the power to make racist laws — but all of them are illuminating.

That ends up being the greatest strength of Frankenstein Dreams. Nineteenth-century English literature is often condensed into a few dozen ubiquitous masterworks, so reading these slightly oddball stories evokes an almost Victorian sense of discovery. (It might end up being an equally Victorian sense of obsession — I ended my first read with two pages of increasingly underlined notes — but I'm sure I'll be fine. Anything is possible now.)

In a previous version of this book review, Ignaz Semmelweis' first name was misspelled as Ignatz.