Accessibility links
Take A Dip Into The Glittering Past Of 'The Riviera Set' The fabulously louche social scene of the mid-century French Riviera — where socialites and stars mixed with the likes of Winston Churchill — comes alive again in Mary S. Lovell's The Riviera Set. 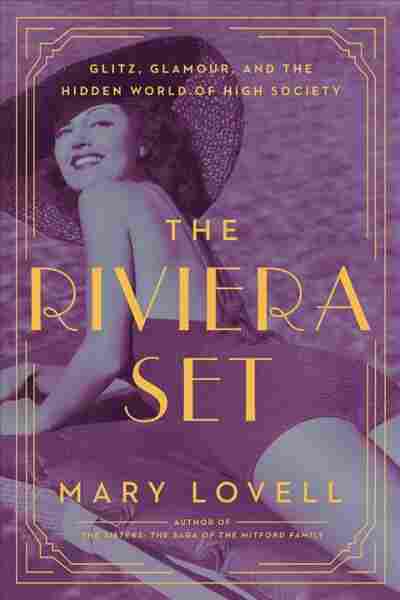 Glitz, Glamour, and the Hidden World of High Society

While we may always be concerned with the lives of the rich and famous, the rich and famous don't always deserve that concern. Even in the hands of the legendary biographer Mary Lovell, I wondered if the denizens of The Riviera Set would sustain our interest five decades on, for the book ends in 1960 — and ostentatious wealth is now on a nasty bender.

However, being gauche and being louche are two different things, and just about everyone at the Chateau de L'Horizon knew how to be outrageously amusing, utter a riveting bon mot, and mix an unheard-of cocktail. At least one socialite added Benzedrine to the punch bowl.

Chateau de l'Horizon, a real villa, is the fantasy background for this book — a white Art Deco chateau clinging to the rocks of the Cote D'Azur outside Cannes. Built in 1932, for the American actor Maxine Elliott, it was the apogee of pre-World War II glitz — a playground where an artificial moon hung in umbrella pines, where Winston Churchill could write his histories, soak both his ego and his person (a water slide went straight from the pool into the Mediterranean) and flirt with beautifully-dressed young things. There, Noel Coward could entertain the guests at the piano until dawn, no respectable profligate was seen before noon, the wit Elsa Maxwell held court, and the Windsors could slink away.

In short, almost all the glitterati of the British-dominated French coast of the 1930's passed through the Chateau, leaving rivalries and legacies, and shaping history. Lovell takes us through three decades, two world wars, and endless intrigue. And parties: Swimming, luncheon, cocktail, bridge, dinner, "anything that would give pleasure," as Elliott liked to say.

In short, almost all the glitterati of the British-dominated French coast of the 1930's passed through the Chateau, leaving rivalries and legacies, and shaping history.

At the heart of the Chateau de l'Horizon is our hostess, originally from Rockport, Maine — and a marvel of self-invention, surpassing even the exquisite mansion created for her by architect Barry Dierks. Elliott was one of the most famous stage actors of her day, and a lot more besides. A canny investor, (she grew her fortune in stocks) a some-time lover of J.P. Morgan, and a ravishing beauty, she also helped invent the idea of war relief, revamping an old barge she found in Calais and using it to deliver aid to starving Belgians during World War I. She shed herself of two husbands before age 40 and lost a cherished 15-years-younger lover, a Wimbledon champion, on the Aubers Ridge on the Western Front. Following a deep depression and retreat, she rallied, and the chateau was her ode to the world. She was over 60 when she threw open the doors.

Elliott's story almost defies gravity. Mary Lovell writes that she'd never before attempted the biography of a house, but came across Elliott and the chateau when she was researching a book on Churchill, and had to tell this story. The Riviera Set is overstuffed with social butterflies and 10th barons of What's -it-Shires of the Realm, but what Elliott did for Churchill — giving him a taste of peace and prosperity in his time, at least on the Chateau's waterslide — probably helped save England, and by extension, the Allies.

After Elliott died in the spring of 1940, the house was occupied by Nazis. Eventually, the royal playboy Aly Khan, son of the Aga Khan, took it over. Aly Khan's war stories, though, far outweigh my interest in his actual time at the chateau — and not even Rita Hayworth, who married him, could really set the Chateau de l'Horizon right again. (Pamela Churchill, later America's ambassador to Paris as Pamela Harriman, does a decent job.)

But the twinklers in this firmament are those young things who strolled into their later years along the route between London, Cannes, Deauville, and Monte Carlo — sometimes quite sadly. Doris Castlerosse, the Benzedrine-in-the-punchbowl prankster (and great-aunt of model Cara Delevingne), used to enter parties crossing herself "tiara, brooch, clip clip," but came to a suicidal end in middle age.

In the end, Lovell has to rent a small yacht herself to go searching for the fabled white villa on the cliff — and can't find it. This makes no sense, for she knows that it's there. But it has been swallowed by an ego that makes Maxine Elliott's look tiny: King Fahd and the Saudi royal family own the house now. They've enlarged and eclipsed it, and gotten rid of anything that would give a public view. The Cote D'Azur may still be a playground, but today's Russian oligarchs and super-rich are far less fascinating than Maxine Elliott's firmament, which shines again here.