Accessibility links
New Wind Farms Cause Friction In The Sky Over Military Flight Routes As wind farms expand across the country some are facing new opposition. Military bases complain the tall turbines interfere with their training flights and safety of their pilots. 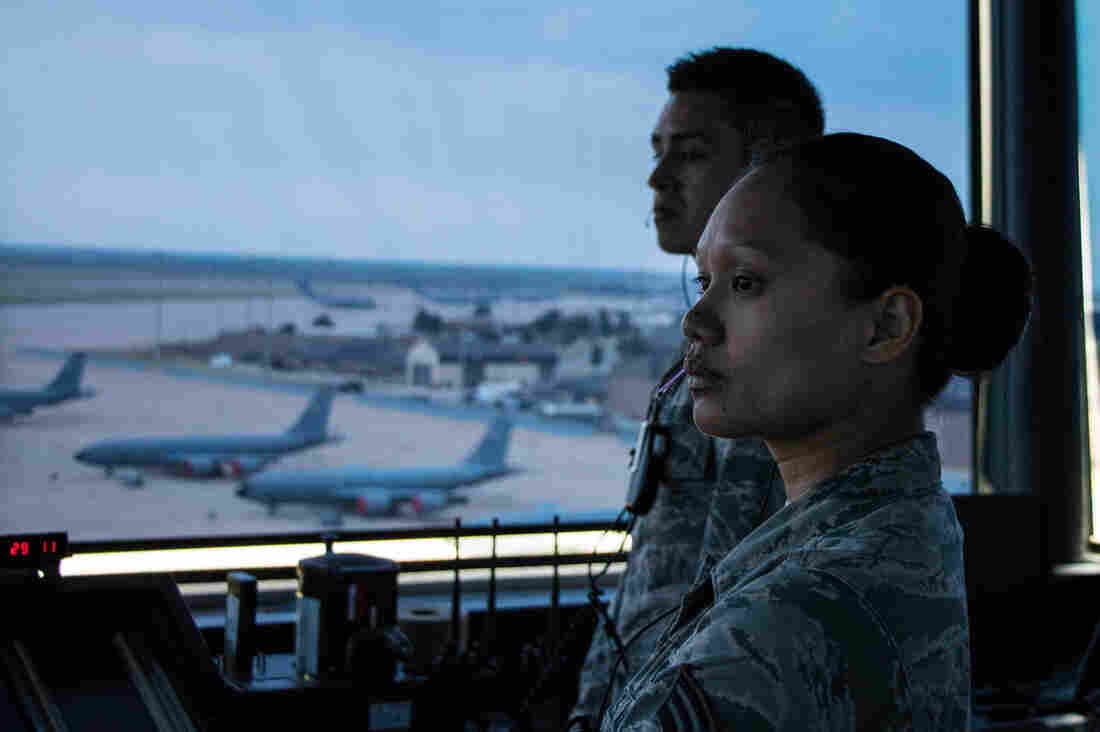 Senior Airman Yazmine Nanasca with a control tower crew at Altus Air Force Base guide a C-17 cargo plane a KC-135 tanker as it taxis to the runway for a day-long training mission in southwestern Oklahoma. Joe Wertz/StateImpact Oklahoma hide caption

The hulking C-17 is the pack mule of the United States military, designed to lift and transport troops, tanks and even helicopters. Every American C-17 pilot is trained at the Altus Air Force Base in southwestern Oklahoma, where flight instructor Adam Bergoo says a key lesson is how to fly close to the ground.

"That's one of our military missions, is to fly low-level, because that basically reduces the risk of detection, and getting shot at by the bad guys," he says.

The western part of Oklahoma has been ideal for this because the skies are wide open. But Bergoo says one of his training routes is now partially blocked by a wind farm.

"Say that route corridor is about five miles wide," he says, "and now we have two miles of that blocked by wind turbines."

Airspace As An Asset

New wind farms threaten other flight training routes, too. Top brass at Altus and Vance Air Force Base near Enid, where pilots are trained to fly smaller planes, are sounding the alarm with local officials and state lawmakers. Business leaders are also complaining. They want to keep the airspace open to attract aerospace companies and entrepreneurs who need a place to test drones.

Yet another concern is safety. While no accidents involving military pilots and wind turbines have been reported here, the Oklahoma Aeronautics Commission is worried about the potential hazard as wind farms expand.

"Several members of the military have echoed concerns of what would happen if an aircraft lost an engine, or had a bird strike, and they had to eject over or near a wind farm," says Grayson Ardies, who manages the commission's Airport Development Division. 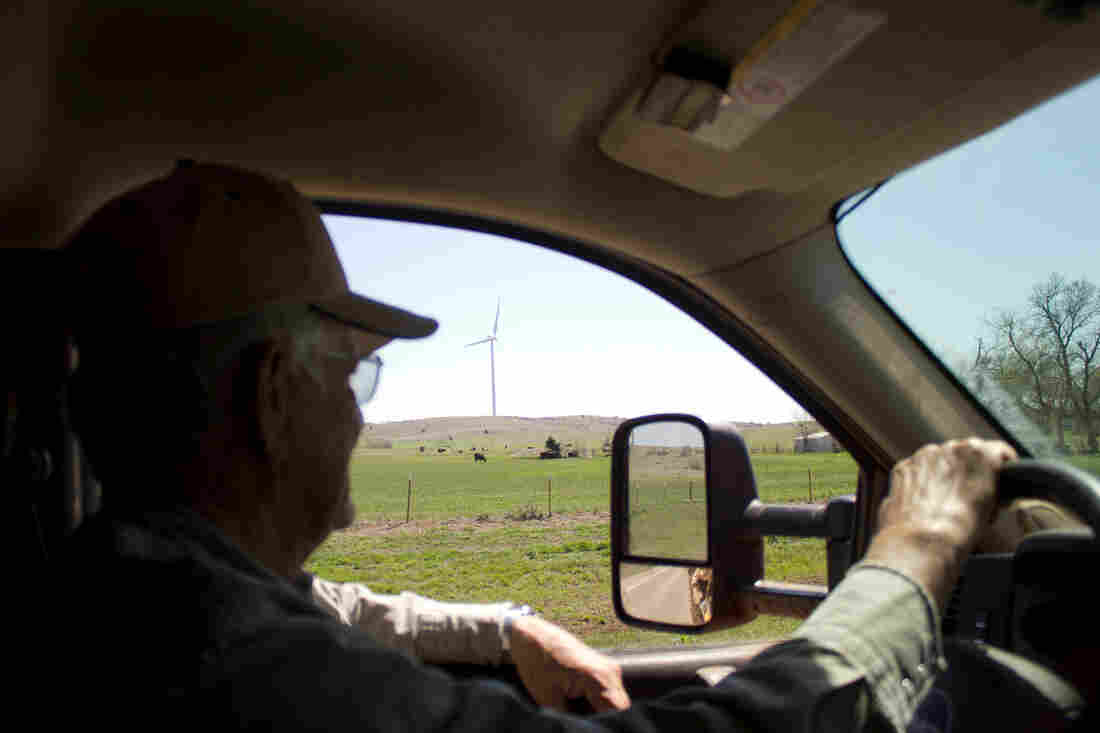 A landowner drives by a turbine on his ranch in western Oklahoma. Joe Wertz/StateImpact Oklahoma hide caption 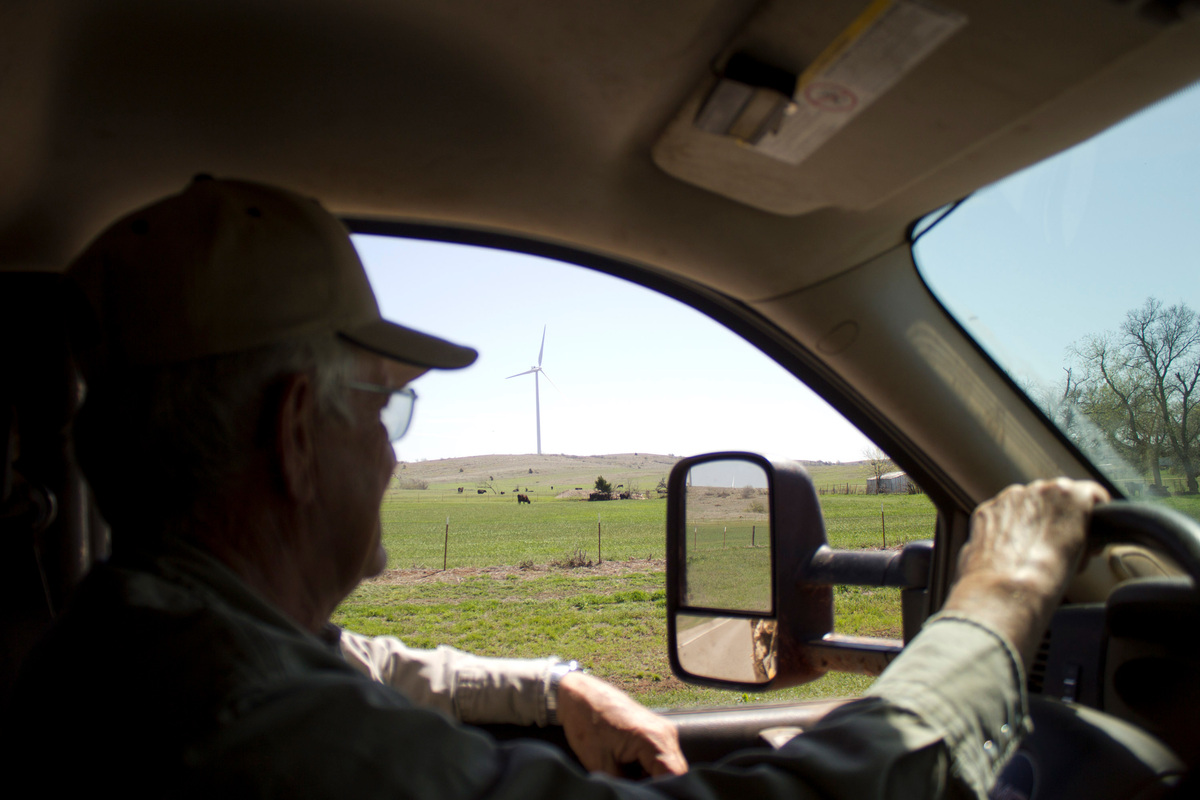 A landowner drives by a turbine on his ranch in western Oklahoma.

The wind industry opposes both ideas.

"Creating a new state bureaucracy is not the way to go," says Jeff Clark with The Wind Coalition, which represents wind developers in Oklahoma. One recently announced project in the state's panhandle would be the country's largest wind farm.

Wind farms have run into trouble with military installations in other states. The Department of Defense has blocked projects in North Carolina over concerns the wind towers would interfere with a bombing range and military radar. The Tar Heel State recently barred wind farm permits for 18 months. This year, Texas Gov. Greg Abbott signed a bill to prevent wind industry tax exemptions for any project within 25 miles of an air base.

New technology is making turbines and blades more efficient, which means wind farms are going up in locations companies would have skipped just a decade ago, Clark says.

But the wind industry suspects there's another reason the conflict is gaining momentum.

"Anti-wind groups have figured out that this is an issue that they can use to drive a wedge between communities, and to raise concern even if those concerns aren't warranted," Clark says.

Lawmakers who support restrictions dispute this, and say they simply want to safeguard military sites.

All wind farms must be approved by the Federal Aviation Administration, which encourages companies to consult with military bases before locking in new sites. Military officials can also work through the Defense Department to block wind farms if they believe they threaten national security,

"This is a role for the federal government," Clark says. "The Pentagon, frankly, and the FAA are very skilled and knowledgeable, and they have the expertise to manage these things."

At Altus, the rookie C-17 pilots lifting off will fly for hours, rehearsing approaches. Once trained, they'll deploy to carry critical cargo on missions around the world. Flight instructor Bergoo says the entire country depends on Oklahoma's open airspace.