Accessibility links
Trump's Turn To Democrats Poses Fresh Challenge To His Loyal Base Even in his Inauguration Day address, Trump signaled that he might go his own way. He may be testing that option now, keeping a weather eye on the reaction from his truest believers. 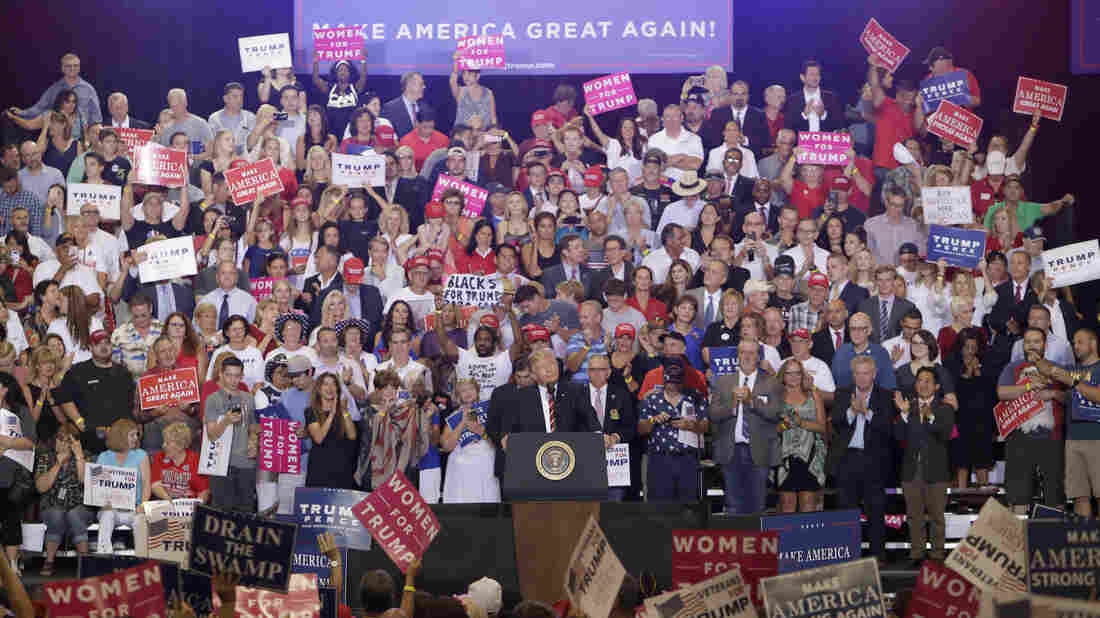 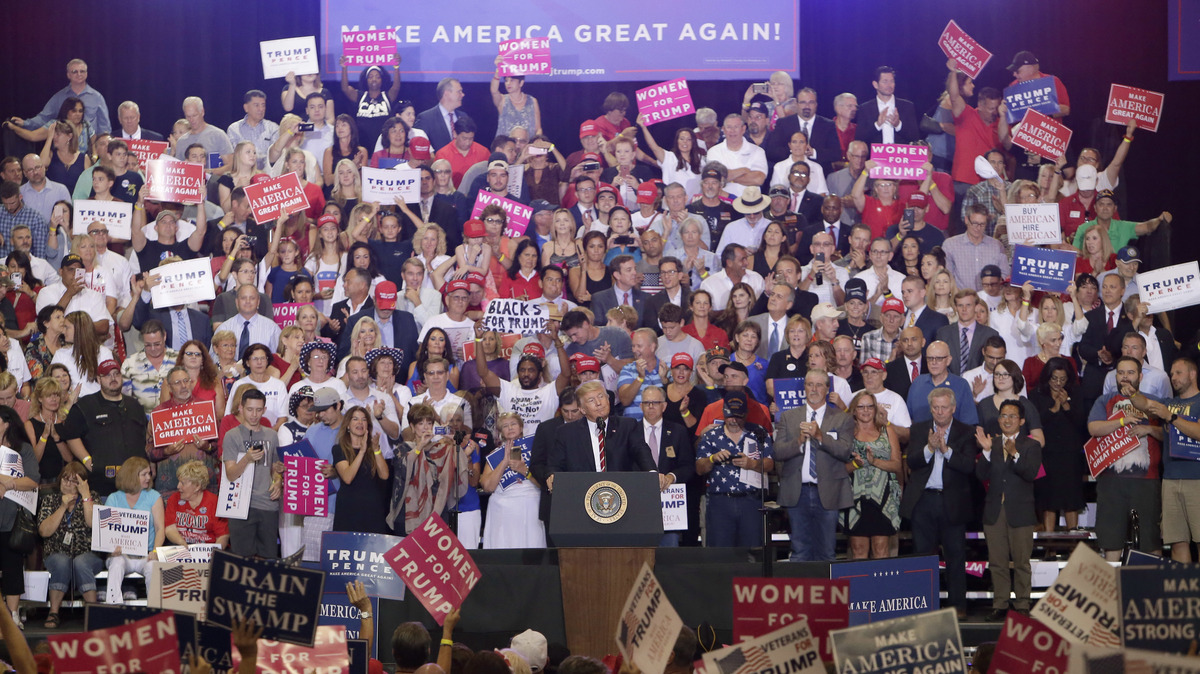 Last week, faced with one natural disaster festering in Texas and another impending in Florida, Trump used a storm relief bill to save Congress from a fiscal disaster of its own making.

Moreover, he did it by shunning his own party's leaders in the House and Senate and cutting a deal instead with the leaders of the opposition.

So it was that the president ended the week basking in appreciation across a broad swath of the media spectrum — a fact he noted with satisfaction in a follow-up conversation with Senate Minority Leader Chuck Schumer, D-N.Y.

"He said, do you watch Fox News? I said, not really," Schumer reported. "He said, they're praising you. And your stations — meaning I guess MSNBC, CNN — are praising me. This is great."

No one doubts that the president would prefer to be celebrated on the cable programs he reportedly watches obsessively, including CNN and MSNBC. Despite his claim that "any negative polls are fake news," he cannot have enjoyed watching his approval rating slide into the 30s in the preponderance of national polls. He knows as well as anyone that in politics, as in entertainment, perception of popularity is as important as popularity itself.

What we do not know is how these latest moves will play with Trump's most loyal fans, the people who voted for him last November and who have never stopped telling pollsters they approve of him.

Will it strain their loyalty to see their champion suddenly making nice with the likes of Schumer and House Minority Leader Nancy Pelosi, D-Calif.? Were they surprised to hear Trump refer to "Chuck and Nancy" as though they were all old pals?

Among hardcore conservatives, those two names are about as popular as Harvey and Irma are around the Gulf Coast right now. For years, Republican campaigners have cast Pelosi as the Wicked Witch of the West, a surefire goad to donors and voters alike.

So how will this work for the people who go to rallies and chant "Drain the swamp!" and "Lock her up!" and cheer wildly for their president? We saw these events in 2015 and 2016, and we have seen them again this year in Iowa, Ohio, Pennsylvania and Arizona.

In Phoenix, Trump got a roar from his boisterous crowd when he vowed to get the money for his wall on the U.S.-Mexico border or "close down our government."

Trump Says Debt Ceiling Is 'Not Necessary.' Is He Right?

But here we are in September and we see Trump in cahoots with Democrats. And they are not only working to keep the government open but also talking about eliminating the debt limit permanently.

And not only did the September deal with Democrats omit any money for the wall, but a day earlier the president had professed the "great love" in his heart for the DREAMers, the people in the country illegally who were brought here as minors.

Wait, now. These DREAMers are the beneficiaries of DACA (Deferred Action for Childhood Arrivals), a signature program created by executive action by former President Obama. Less than a week ago, Trump had sent his attorney general out to declare DACA illegal, unconstitutional and bound for oblivion. He gave Congress six months to act.

And now we hear the White House actually wants Congress to act on DREAMers' behalf? And, according to another tweet, the president will otherwise "revisit" the issue?

Congress now has 6 months to legalize DACA (something the Obama Administration was unable to do). If they can't, I will revisit this issue!

The contradiction on DACA, even more than on the fiscal agenda, would seem to pressure the Trump coalition to a dangerous degree. Is there not a point where the hardcore is puzzled? Or cries out in pain?

It's too early to say, but early indications suggest the base will hold firm — at least for now. One big reason is that the people most upset about Trump's recent overtures to Democratic leaders in Congress are the Republican leaders in Congress — and the latter are themselves unpopular with Trump's supporters.

Those Republican leaders are pinned down right now by crossfire from multiple directions. Speaker Paul Ryan, of Wisconsin, and Senate Majority Leader Mitch McConnell, of Kentucky, are criticized by their Democratic counterparts in Congress, of course. But the heavier fire comes in from conservative media, bloggers and talk show hosts, some of whom are beginning to demand that the two GOP leaders be replaced.

"Trump voters are clearly disgusted by the failure of Congressional GOP leadership to keep their promises," said Rick Manning, president of Americans for Limited Government, talking to Breitbart News. "For those in D.C. who are politically deluding themselves, it is clear that the way forward is by standing on the president's shoulders, not by cutting him off at the knees."

In truth, Ryan and McConnell were the ones felled by that White House meeting with the president, the Democrats and Treasury Secretary Steve Mnuchin. Yet this was only their most recent humiliation at the hands (or tweeting thumbs) of the president, who clearly uses them as a foils. 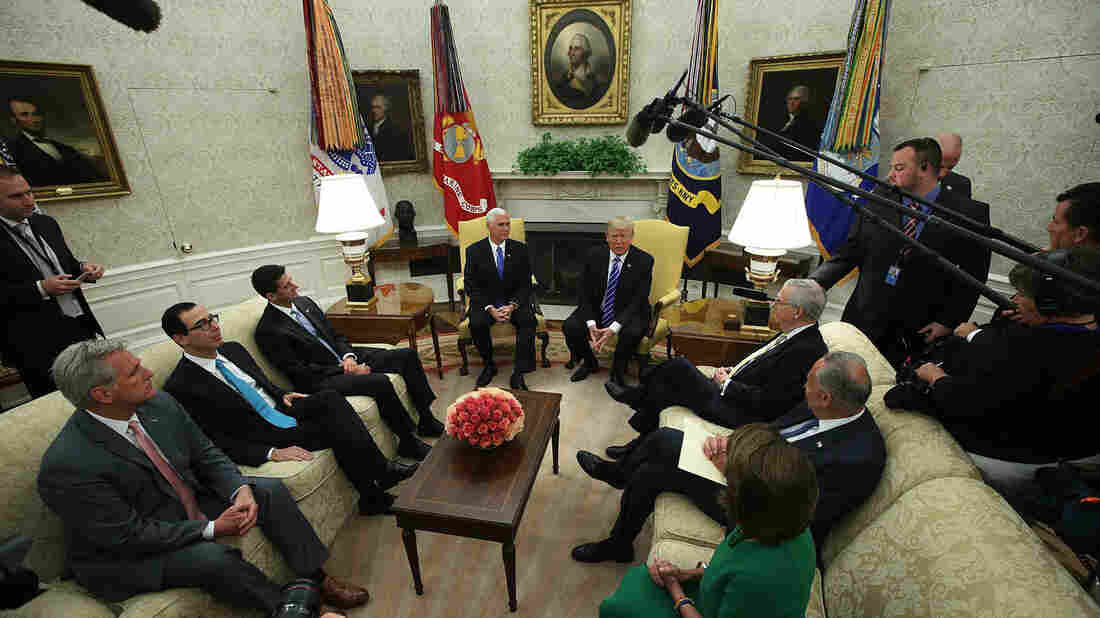 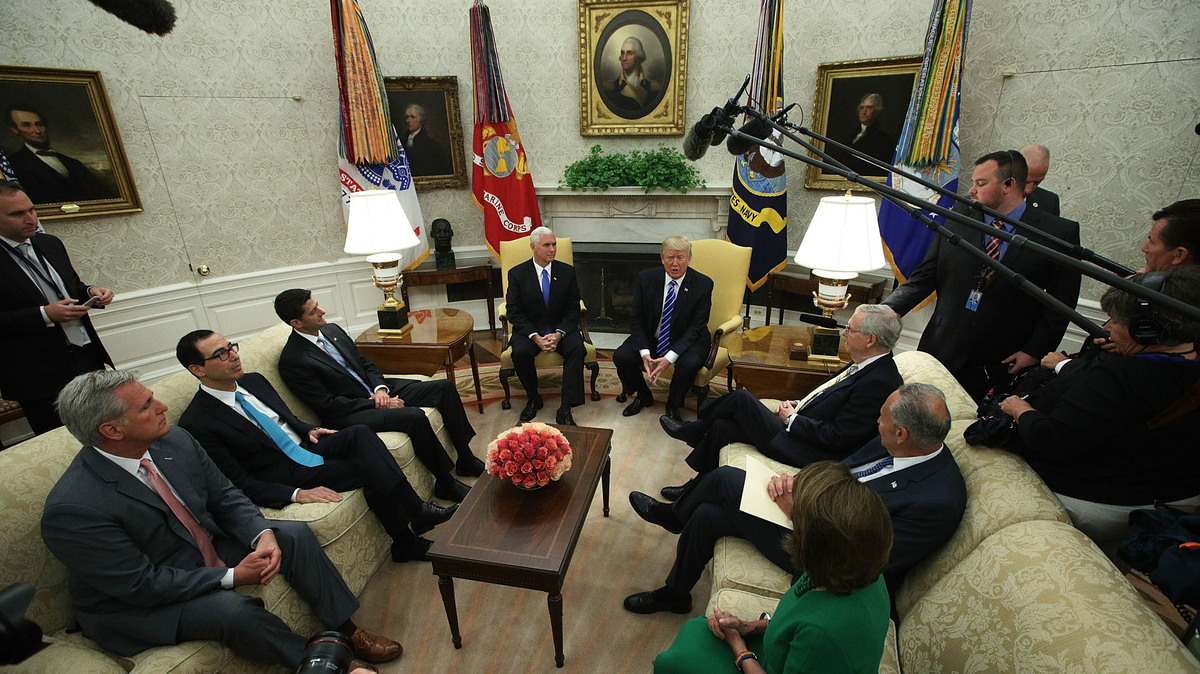 Trump has not forgotten Ryan's withdrawal of an invitation to campaign together in Wisconsin after the Access Hollywood tape last October. Nor has he forgiven McConnell for the Senate's failure on the repeal of the Affordable Care Act.

The war between Trump and these GOP chieftains has been a one-sided affair. Even after the latest blowup, Ryan and McConnell toed the line and excused the boss for doing what he did. It was, they said, a moment of national emergency.

They had little choice. Whatever they know about what will come next, and about the price Schumer and Pelosi will exact, they cannot denounce the president. Again, the reason is the strength of his tie to his backers.

Hardcore Trump supporters may account for less than 40% of the national electorate. The latest Gallup Poll shows only 38% approve of his job performance. But the same soundings find that among Republicans, Trump's approval remains above 70%.

Dominating opinion within one party is not enough to elect or re-elect a president, perhaps, but it's more than enough to win GOP primaries. That is why every Republican seeking to replace Jeff Sessions in the Senate wanted Trump's endorsement in this summer's GOP primaries (where a runoff is now slated for Sept. 26).

Why does Trump's brand remain strong among Republicans? A lively debate has sprung up over this question. In the weeks and months right after the election, voters who had shifted from Obama to Trump were often characterized as disaffected middle-class Americans who had lost their purchase on the American dream. They were victims of automation and immigration, left behind in the heartland by high-tech industries concentrated on the coasts. Their communities had been ravaged by opioid addiction and high rates of alcohol abuse, depression and suicide.

But compelling as these arguments remain, they do not tell the whole story. Trump's voters may be dislocated by economic changes, but they are disturbed by social and cultural changes as well.

A recent survey by NBC News asked how comfortable Americans were with changes in the society and the culture. A little over half (55%) were basically comfortable. That sentiment was shared by less than half of seniors (48%), those living in rural areas (38%), Republicans (30%) and conservatives (33%).

The least comfortable of all (28%) were the Trump voters.

This group is composed primarily of Republicans, but also includes some independents and not a few "legacy" Democrats. It is entirely possible that this mix will react to Trump's latest gambits quite positively, seeing an opening to Schumer and Pelosi as potentially productive.

In his Inaugural Address, Trump described his truest supporters as "the forgotten men and women of our country" That is far from being a new theme in American politics. Richard Nixon used a similar phrase in some of his campaigns nearly half a century ago.

With Nixon, as with Trump, it spoke to a wide range of concerns — economic, to be sure, but also social and cultural. Nixon found this enabled him to govern without a fixed, ideological playbook — pleasing his own party most of the time but acceding to the creation of the EPA and various other new regulatory agencies as well. He signed the bill mandating athletic programs for women in college. He put in place wage and price controls. He went to China.

The Nixon model was urged on Trump at the outset of his presidency. In the early going, he chose to work almost exclusively with the party that had nominated and elected him. But he had signaled, even in his Inauguration Day address, that he might go his own way.

He may be testing that option now, keeping a weather eye on the reaction from his truest believers.