Accessibility links
Federal Judge Rules First Verse Of 'We Shall Overcome' Public Domain The decision follows a year-long lawsuit filed by a documentarian against music publishers and folk singers, including the late Pete Seeger, who copyrighted the civil rights anthem in the 1960s. 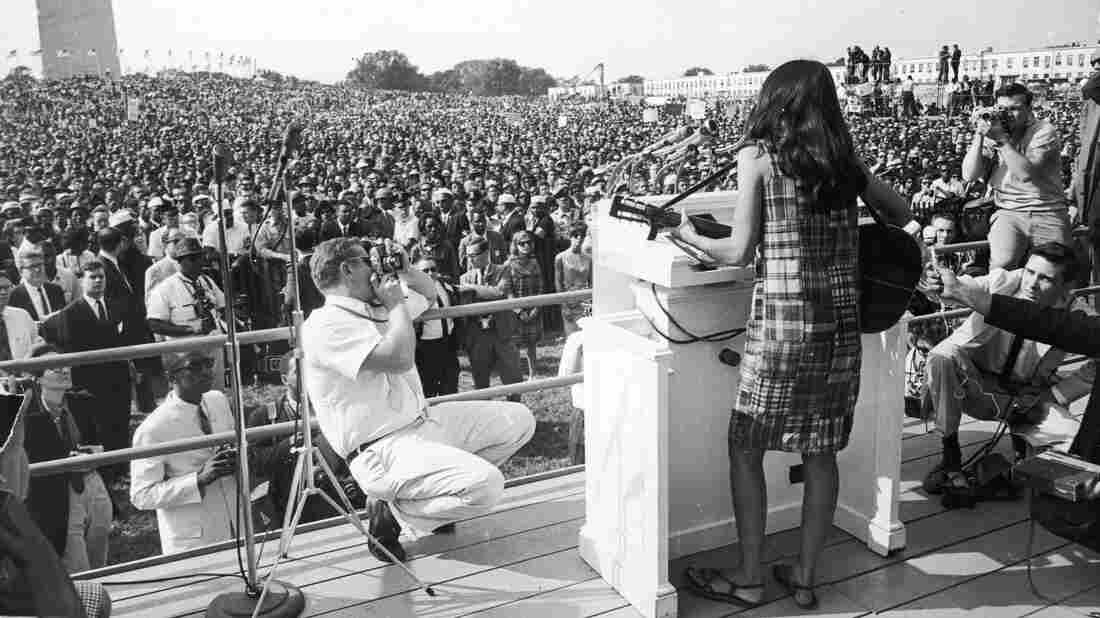 Joan Baez performing at the the Civil Rights March on Washington in 1963. She sang "We Shall Overcome" and "Oh Freedom." Express Newspapers/Getty Images hide caption 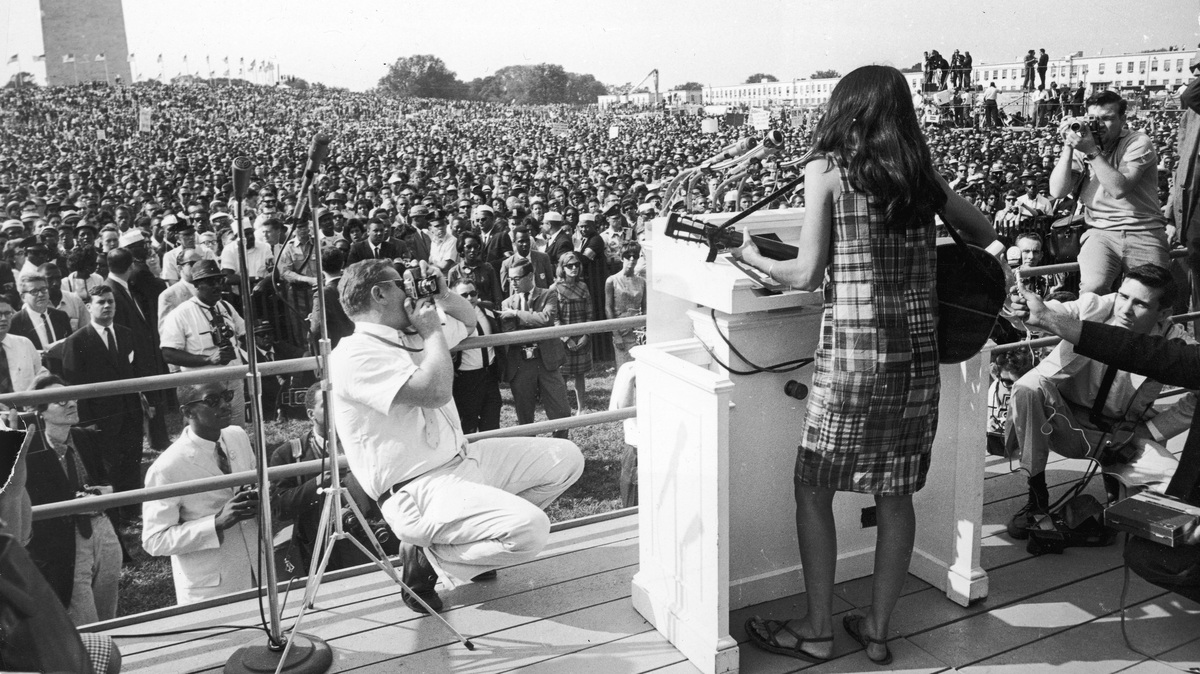 Joan Baez performing at the the Civil Rights March on Washington in 1963. She sang "We Shall Overcome" and "Oh Freedom."

Last Friday, a federal judge in Manhattan ordered that the first and most famous verse of the Civil Rights era anthem "We Shall Overcome" belongs in the public domain.

Plaintiffs in the case had asked the judge to negate a half-century-old copyright by four songwriters, including the late Pete Seeger.

Who Owns 'We Shall Overcome'? All Of Us, A Lawsuit Claims

Seeger's name had been added to the copyright of "We Shall Overcome" in 1962. Though the origins of "We Shall Overcome," like those of many folk songs, are difficult to pin down, Seeger said, "it was known among the food and tobacco workers — mainly negro union members — and I heard them singing in in 1947, '48."

The lyrics of that earlier version ran, "We will overcome." The music publishers defending the song's copyright argued that Seeger and his three co-authors changed "will" to "shall" — and slightly altered the melody of the existing tune. The defendants' attorney, Paul LiCalsi, says those changes deserve copyright protection.

"The changes, in fact, although they were simple, were profound," he says. "And the verse 'We shall overcome' is what became the anthem of the Civil Rights movement, not 'We will overcome,' not any of the other variations."

And there are a bunch of variations, including a 17th century hymn, a version that appeared in the folk music magazine Sing Out! in the late 1940s and a hymn copyrighted in 1954 called "If My Jesus Wills." Six years later, Seeger and that group of folk singers filed another copyright claim.

Music producer Isaias Gamboa made a documentary film about history of "We Shall Overcome," but was denied a license to use the song by the music publishers behind that copyright registration.

Gamboa says he's been warned repeatedly about the repercussions should he go ahead and use the song anyway.

"My lawyers — and many other lawyers — have said, 'Isaias, if you try to put this film out, they can shut the film down. They've done it before. All they have to do is wait till it gets released and distributed, send a letter, cease and desist, and that's it — you're toast.'"

So last April, Gamboa sued. On Friday, Judge Denise Cote of the Southern District of New York ruled that the changes — from "will" to "shall" and to the melody — "lacked originality," and that the verse belongs in the public domain.

Her decision is likely to have adverse effects on the very communities where the song has the most meaning, according to Ash-Lee Woodard-Henderson of the Highlander Center. The Tennessee nonprofit distributes half of the royalties earned by the song — around $40,000 a year — as grants. The Highlander center had announced the most recent, and now, possibly final winners of those grants literally hours before the ruling.

"That money is going literally to all 13 of the southern states," Woodard-Henderson says. "It's going to black communities in cities and counties, from hoods to hollers."

The case is far from over: Gamboa, for one, won't be able to release his film until the court rules on the other verses of the song. Attorneys for the defendants in the suit also say they're considering their next move.