Accessibility links
Hillary Clinton Book Review: 'What Happened' May Be For Clinton Most Of All Danielle Kurtzleben says Clinton's tale about her losing 2016 campaign reads like the unburdening of a woman relieved to finally, without interruption, tell her side of a story everyone already knows.

Months after the world watched her endure a brutal humiliation, Hillary Clinton walks into her study. She sits down at her computer, sighs, pinches the bridge of her nose.

"OK, everyone. Shut the hell up and listen," she mutters.

And then she types feverishly for weeks — or however long it takes to pound out 469 pages. 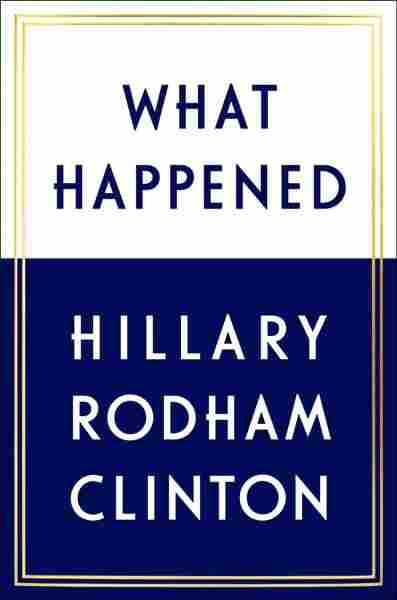 It's easy to imagine this being how Clinton wrote What Happened, her account of running for, and eventually losing, the presidency to Donald Trump. There's a sense in this book that, after two years of stoic composure, Clinton simply needed to get it all out.

It must be a relief, given the number of times that Clinton writes about holding her tongue. When Rep. Jason Chaffetz, R-Utah, tweets on Inauguration Day that he's "so pleased she is not President," she holds back a barb about how she didn't even know who he was ("To be honest, thought you were Reince.").

When an older woman demands that her adult daughter apologize to Clinton for not voting, Clinton swallows her bile:

"I wanted to stare right in her eyes and say, 'You didn't vote? How could you not vote?! You abdicated your responsibility as a citizen at the worst possible time! And now you want me to make you feel better?' Of course, I didn't say any of that. These people were looking for absolution that I just couldn't give. We all have to live with the consequences of our decisions."

Hillary Clinton Is 'Done,' But Not Going Away

She stays home from the Women's March: "If I showed up, nasty politics would unavoidably follow." After Election Day, she writes about being "upset and worried for the country," but decides to keep quiet.

"I didn't go public with my feelings. I let them out in private."

And that's all before Page 25.

All of which is to say that the perennial political-book-reviewer question — "who is this book for?" — may be irrelevant here.

It's true that in the author's note, Clinton seems to articulate a statement of purpose, saying that "the lessons we draw from 2016 could help determine whether we can heal our democracy and protect it in the future."

But ultimately, it reads like a book she had to write, audience be damned — a book written out of exasperation. If Trump's combative inauguration speech was "a howl from the white nationalist gut," as Clinton puts it, her book is a howl from the gut of Hermione Granger — the embattled cry of the hyper-competent woman who desperately wishes the world were a meritocracy. 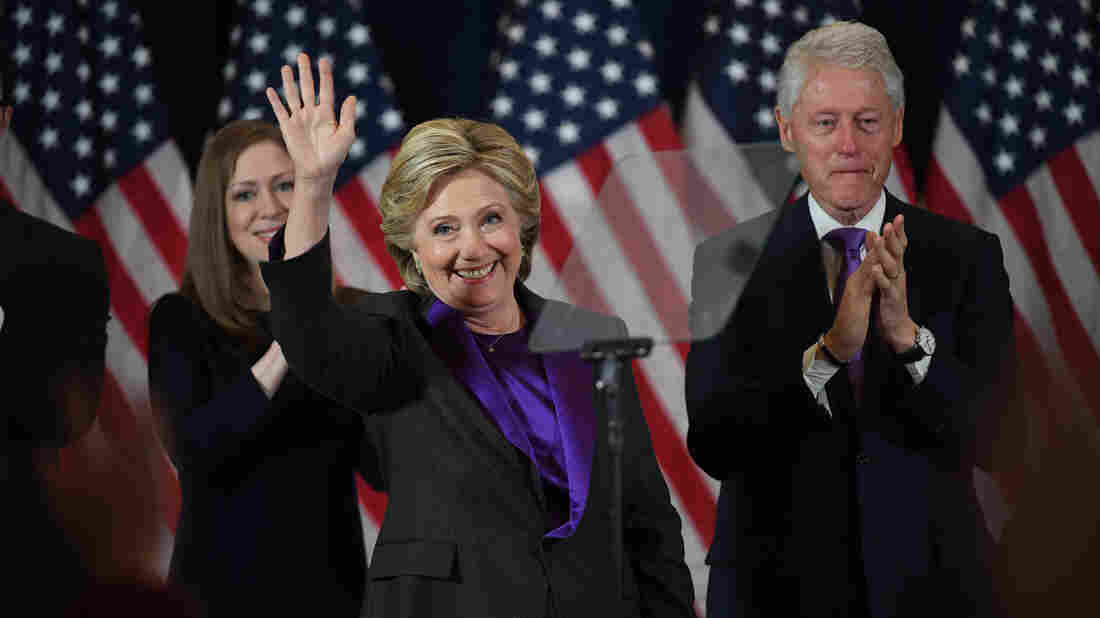 Hillary Clinton speaks on Nov. 9, 2016, the day after the election — a speech that in her new book she calls "a feat of self-control." The Washington Post/Getty Images hide caption 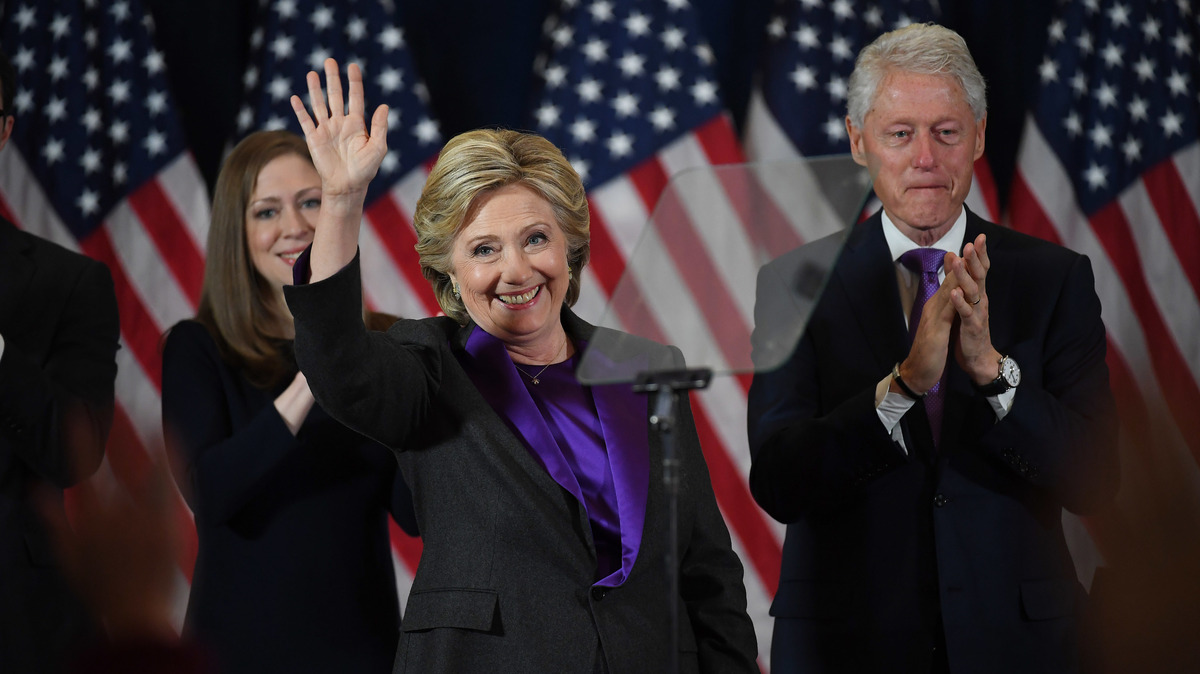 Hillary Clinton speaks on Nov. 9, 2016, the day after the election — a speech that in her new book she calls "a feat of self-control."

Clinton seems to have seized the opportunity to unleash that cry, uninterrupted and at length. It's a book of exasperation, but for her, it just might be a book of liberation.

The question many readers may have — especially those who want to forget the most vitriolic election of the modern era — is whether it's worth reading.

Ultimately, the book might be a historical artifact most of all — the chronicling of what, exactly, it was like to run for president as the first woman major-party candidate (and, yes, a Clinton as well). Plenty may disagree with Clinton's opinions on what went wrong for her, but her story will still be an important part of that history when America looks back on the melee that was the 2016 election.

But here's what the book is not: It's not newsy. There isn't much here in the way of dirt, unless you count revelations on the level of Bill Clinton's love for NCIS: Los Angeles.

The revelations aren't the behind-the-scenes kind so much as the in-Hillary's-head kind. Those wondering how she got through those hours and days after the election get their answers. She elegantly communicates the numbness she felt after watching Trump's acceptance speech: "We lay down on the bed and stared at the ceiling. Bill took my hand, and we just lay there."

But then, Clinton's book is also at times a chatty campaign memento (a full chapter on "a day in the life" gets into banal details about Team Clinton's campaign diet), a policy primer (she explains at length her thoughts on helping the white working class), a timeline (she lays out, step by step, how the email controversy unfolded), and an autopsy of what exactly went wrong in her campaign.

The autopsy parts of her book have already grabbed headlines, with Clinton's criticisms of Bernie Sanders and Joe Biden. But her postmortem on her campaign is not an angry, blame-hurling tirade, nor is it by any means a full mea culpa.

Rather, Clinton parcels out responsibility, and she is exacting in her accounting. The result is a study in contrasts: She heaps praise on some people, which makes it that much more meaningful when she lambastes others.

Clinton has nothing but glowing words for her campaign staff. She is deeply grateful to Barack and Michelle Obama for stumping for her. But she doesn't spare Biden, who at one point criticized her for not talking enough about middle class families: "I find this fairly remarkable, considering that Joe himself campaigned for me all over the Midwest and talked plenty about the middle class."

Former FBI Director James Comey gets much more of a thrashing, with Clinton revealing that she felt she'd "been shivved by then-FBI Director Comey — three times over the final five months of the campaign."

She repeatedly pummels the news media for creating a "false equivalency" between her emails and Trump's scandals.

And the pages radiate contempt for Trump, as well as bafflement at how people chose him: "In 1992 and 2008, change meant electing dynamic young leaders who promised hope and renewal. In 2016, it meant handing a lit match to a pyromaniac."

Likewise, Clinton is contrite at times, stating that she takes responsibility for her loss: "I do think it's fair to say there was a fundamental mismatch between how I approach politics and what a lot of the country wanted to hear in 2016," she writes, in response to the question of whether she was "doomed from the start." 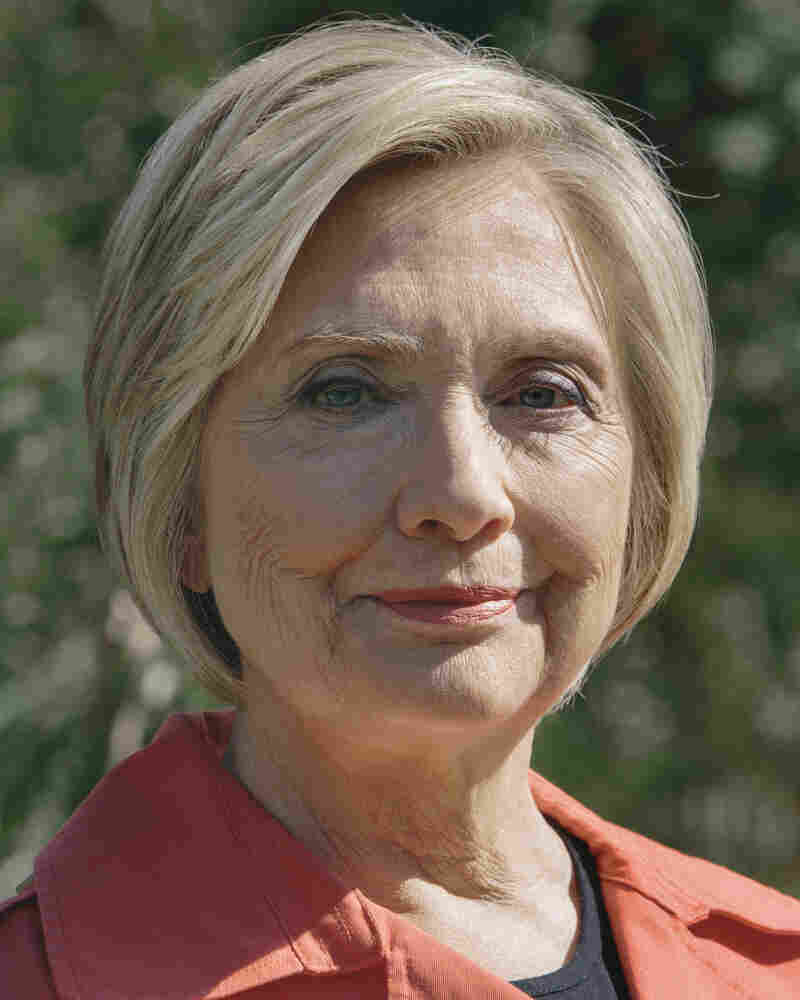 In her new book, Clinton repeatedly pummels the news media for creating a "false equivalency" between her emails and Trump's scandals. Adrienne Grunwald for NPR hide caption

But statements like that throw into sharp relief the things she isn't sorry for.

"When I said, 'You could put half of Trump's supporters into what I call the basket of deplorables,' I was talking about well-documented reality," she writes, going on to cite a survey showing that around half of white Republicans had racist attitudes toward blacks.

And while Clinton is sorry that she made a mistake — "I regret handing Trump a political gift with my 'deplorables' comment" — she is not sorry for the sentiment itself: "Too many of Trump's core supporters do hold views that I find — there's no other word for it — deplorable."

This kind of "I'm sorry for this, but not that" moments are plentiful in What Happened. Clinton addresses the accusation that her campaign had no clear message for struggling Americans: "We can debate whether my economic message was effective, but you can't claim I didn't have one." Or as she says of her decision to use a private email server (her emails get a whole chapter): "It was a dumb mistake. But an even dumber scandal."

This isn't to say that she accounts for all the major criticisms her campaign faced. Her flip-flop on the Trans-Pacific Partnership never comes up. The Loretta Lynch incident gets barely a paragraph, and it's hard not to wonder about what's she's leaving out: What did Clinton say (or scream) when she found out her husband had met with the attorney general on an airport tarmac?

Clinton also blows past a moment that struck terror in her supporters — her near-collapse due to pneumonia at a Sept. 11 memorial service.

The writing in What Happened is engaging — Clinton is charming and even funny at times, without trying to paint herself in too flattering of a light. While she presents herself as even-keeled and intelligent, she also comes off as hectoring and bookish. In a seemingly normal work email to John Podesta, she tacks on at the end: "Please wear socks to bed to keep your feet warm."

She talks at length about her faith, and it will surprise precisely no one to find out that she identifies with the dutiful older brother in the parable of the prodigal son.

And in explaining why she tries not to hit the snooze button, she even claims to have studies backing her up.

Clinton is by far at her most passionate in a chapter on women in politics, expressing outrage that even "good-hearted men who should know better dismiss the notion that sexism and outright misogyny" still exist.

"'But things have changed,' they say, as Donald Trump brags about groping women and a few weeks later wins the presidency, as his rallygoers chant 'Trump that bitch,' as the White House proudly releases photos of old white men gleefully deciding which health services to take away from women," she writes.

But if the ultimate goal is indeed to help Democrats plan for the future, even the most adept, passionate writer probably couldn't win over people who want the defeated face of their party to disappear.

"I wish she'd just shut the f*** up and go away," as one former Clinton surrogate told The Hill before the book's release.

Those readers will probably be especially annoyed when Clinton pulls us a little too far back into the dreck of the campaign, trying to relitigate arguments that don't matter anymore. At this point, will it convince anyone of anything when Clinton says she was "the first candidate to call for 'an end to the era of mass incarceration' "?

In the end, Clinton does get at what she promised in her author's note. She lays out a how-to section for those areas in which she thinks Democrats could up their game: better technology, unifying the centrist and farther-left wings, being more on guard against Russian interference.

It's anyone's guess as to how to do those things. Even without Clinton's suggestions, those questions would have loomed over the party as 2018 approaches.

Even less clear is whether anyone wants to hear Clinton say it. Then again, that may not be the point.