Accessibility links
Trump's Voting Commission Embroiled In New Controversy Ahead Of Next Meeting Ahead of a meeting in New Hampshire, the panel's co-chair, Kansas Secretary of State Kris Kobach, made questionable claims that the state allowed nonresidents to vote last year. 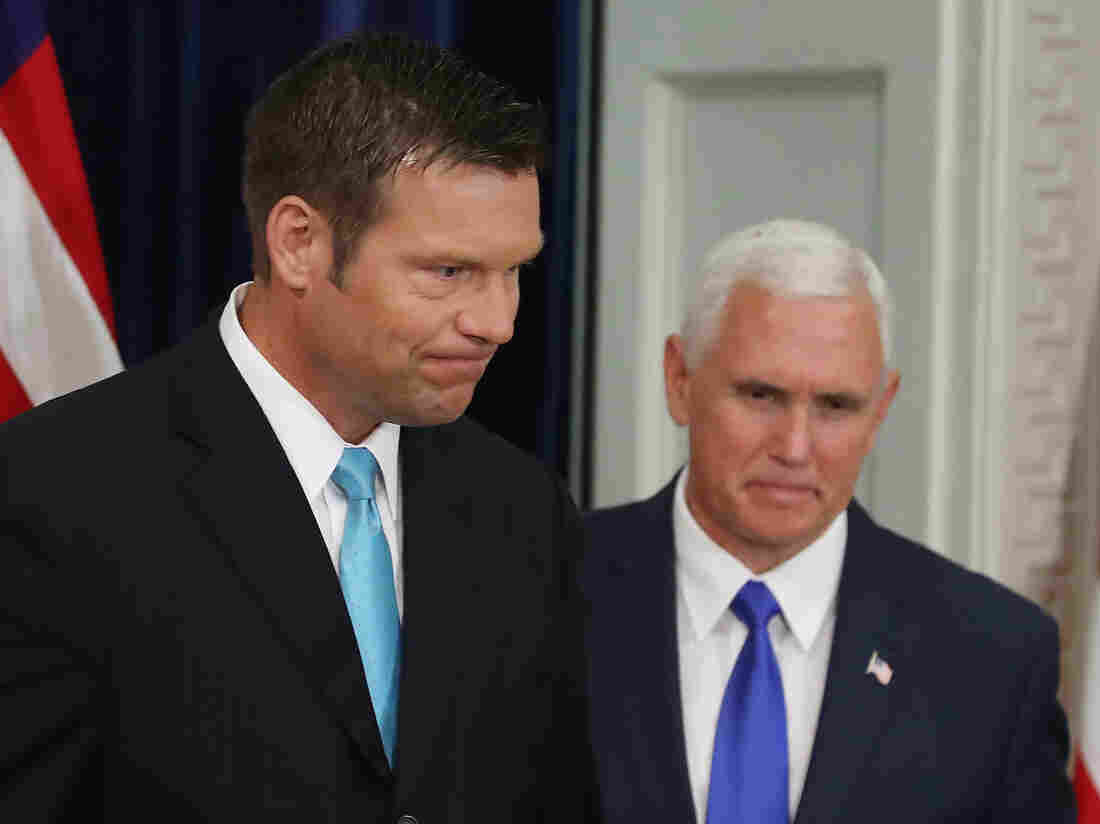 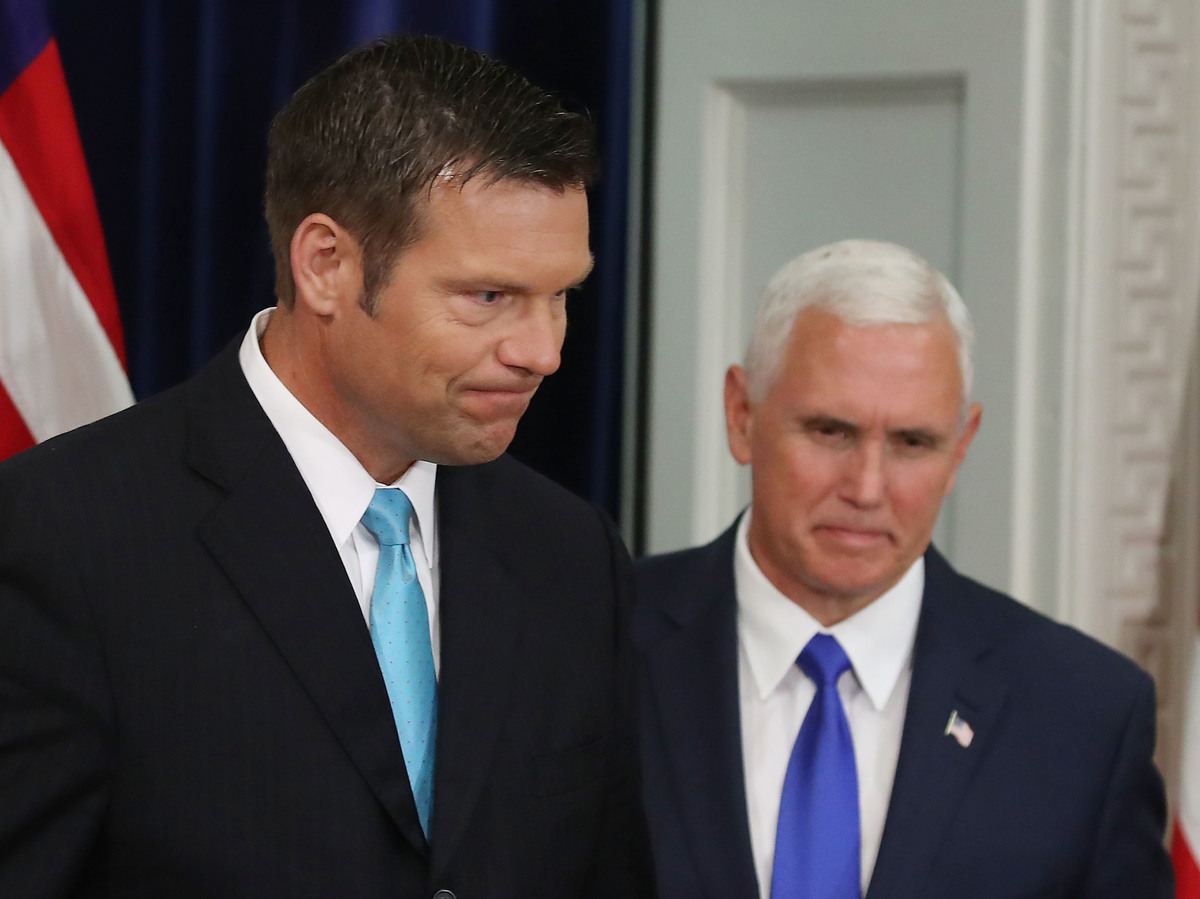 Kansas Secretary of State, Kris Kobach, left, and Vice President Pence at the first meeting of the Presidential Advisory Commission on Election Integrity, in July.

What was already expected to be a contentious second meeting for President Trump's Advisory Commission on Election Integrity, on Tuesday in Manchester, N.H., is likely to get a whole lot more contentious thanks to a column written by the panel's co-chair.

Although the chairman, Vice President Pence, said in that first meeting that the commission has "no preconceived notions or pre-ordained results," the panel's co-chair, Kansas Secretary of State Kris Kobach, seemed to contradict him in Breitbart News last week.

Kobach claimed that "now there's proof" of voter fraud in last year's election, enough to have likely changed the outcome of a key Senate race. He cited a report that more than 5,000 New Hampshire voters used out-of-state drivers' licences as identification and have yet to update those licenses, even though new residents are required to do so within 60 days of moving to the state.

"It is highly likely that voting by nonresidents changed the result," wrote Kobach, one of the few election officials in the country who hasn't dismissed Trump's unfounded claim that up to 5 million ballots were cast illegally last year.

What Kobach didn't say in the Breitbart column is that there are other possible explanations for all the out-of-state voter IDs. The most likely is that many were used by out-of-state college students, who are still eligible to vote.

"It's wrong," says Matthew Dunlap, Maine's secretary of state and one of five Democrats on the 12-member presidential commission. "It oversimplifies the model to say that there's a direct path to fraud through the driver's license. There never has been."

"I don't have proof there's widespread voter fraud, but that doesn't mean that there might not be. It's just that I don't have proof. Well, how do you get to the proof? It's by way of the facts," said Gardner, also a Democrat.

Gardner has come under pressure from New Hampshire Democrats to resign from the commission, which has been criticized as biased towards those who think voter fraud is rampant.

"It's a commission that is about promoting this false and dangerous narrative that vote fraud is something that's widespread across the country and we know that that's just not the case," says Kristen Clarke, president and executive director of the Lawyers Committee for Civil Rights Under Law.

The commission's stated mission is to find ways to boost public confidence in elections. But Clarke and other voting rights advocates fear the commission's real goal is to push laws, such as strict ID requirements, that will make it harder for minorities and others to vote.

The panel has also been widely criticized by state election officials for requesting that they share detailed voter information with the panel. Several states have refused to comply, citing privacy and other concerns.

The Lawyers Committee is one of several groups suing the commission for violation of federal privacy and transparency laws. There are also complaints that the panel is bipartisan in name only. Its two leaders — Pence and Kobach — are both Republicans.

One of the panel's other Republican commissioners, Hans von Spakovsky of the Heritage Foundation, dismisses the suits as unfounded and says charges that the panel is trying to build a case to suppress legitimate voters are "ridiculous."

"Why do so many people not want the commission asking questions? It seems to be that there are folks out there who don't want an answer to this," he says.

Still, a federal judge has admonished the panel for not being more open in its proceedings. Members of the public were not allowed to attend the commission's first meeting at the White House in July, although it was streamed online. Room at Tuesday's meeting is also limited, and there's no time on the agenda for public comment.

That's disturbing to people like Tammy Patrick, a former Arizona election official who served on another election commission — one appointed by President Barack Obama to try to improve the voting process after some people waited eight hours or more to cast ballots in the 2012 election. The panel was co-chaired by two widely respected election attorneys — Democrat Bob Bauer and Republican Ben Ginsberg — and held several public hearings, at which members of the public could testify.

"We really felt that the voter's perspective and the voter's experience was the main tenet of our effort and so we needed to hear from the voters in addition to election administration and other experts," says Patrick.

Many of that commissions recommendations — including things like more early voting and online voter registration — have since been widely adopted by state and local election officials.