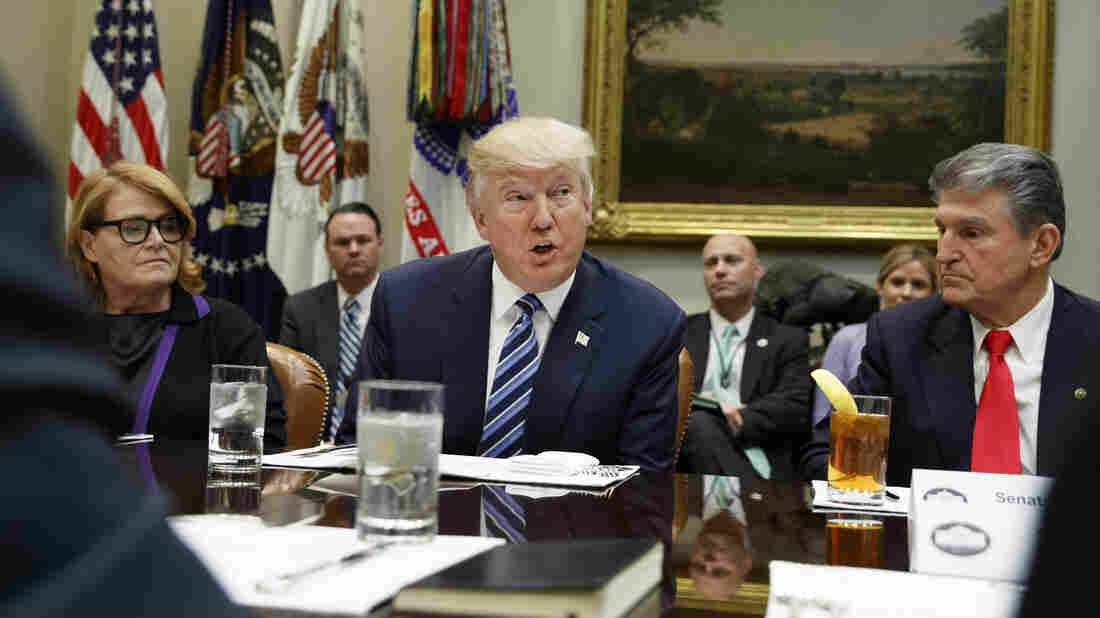 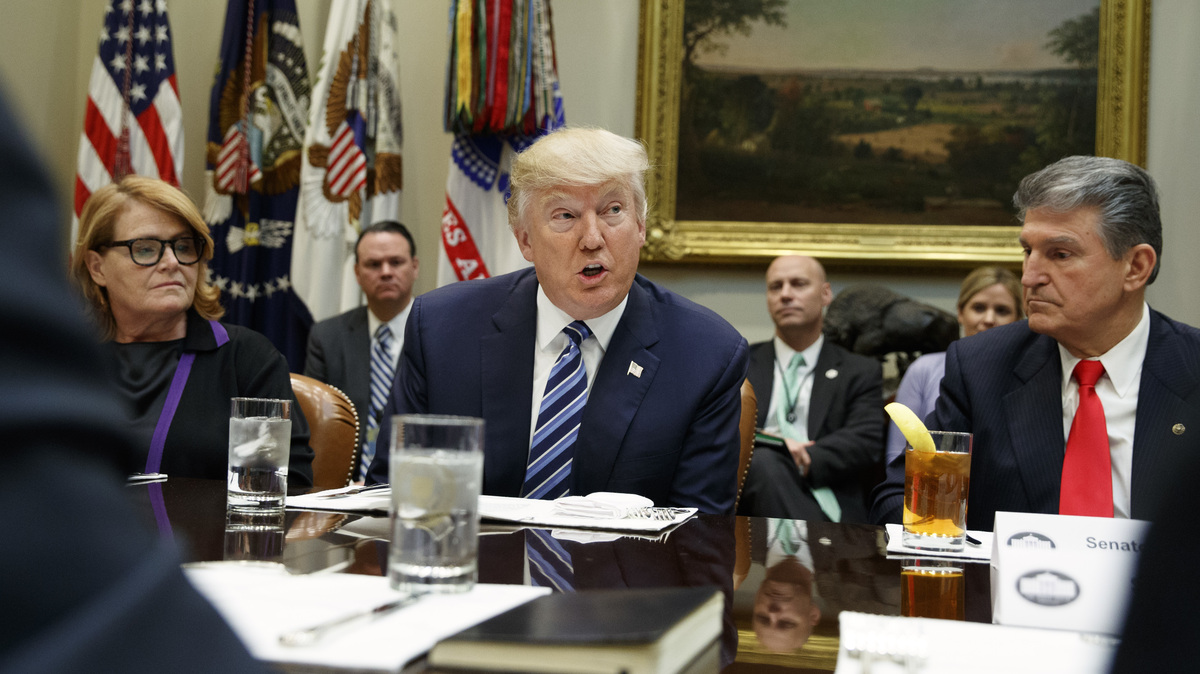 President Donald Trump, flanked by Sen. Heidi Heitkamp, D-N.D., (left) and Sen. Joe Manchin, D-W.Va., speaks during a meeting with senators on his Supreme Court Justice nominee Neil Gorsuch, on Feb. 9, 2017, in the Roosevelt Room of the White House.

President Trump is hosting a dinner at the White House Tuesday night for a bipartisan group of senators. On the menu: his plan to overhaul the tax code.

Republican leaders in the Senate are making plans to advance tax legislation on a simple, party-line vote. But after dissenting Republicans torpedoed the effort to repeal the Affordable Care Act, Trump is eager to line up some Democratic supporters for insurance.

"Keeping 50 of 52 Republicans is not something that's reliable," the president's legislative director Marc Short told a breakfast sponsored by the Christian Science Monitor. "So it's wise for us not just from a policy perspective but from a vote-counting perspective to try to reach out and earn the support of Democrats as well."

The guest list for Tuesday's dinner includes Sens. Heidi Heitkamp, D-N.D.; Joe Donnelly, D-Ind.; and Joe Manchin, D-W.Va. All three are up for re-election next year in states that Trump carried by wide margins.

Last week Heitkamp accompanied the president on Air Force One when he delivered a speech on taxes in North Dakota.

"I'm committed to fixing our broken tax code, and making sure it encourages workers, their families, and our businesses," Heitkamp said afterward in a statement.

She stopped short of endorsing the president's plan, however, which has yet to be fleshed out.

"As North Dakota's former Tax Commissioner, I know the devil is in the details of any reform plan as tax codes are complex," Heitkamp said. "And we need to know what those details are."

Donnelly has also shown an interest in tweaking the tax code to discourage companies from shifting jobs overseas.

"I believe tax reform is an appropriate avenue to determine ways we can reward companies that invest in our workers and penalize those shipping American jobs to other countries," Donnelly said in a statement. "I'm looking forward to talking to President Trump again about my ideas and ways we can work together on this issue."

Trump surprised many observers last week when he struck a bargain with Democratic congressional leaders Sen. Chuck Schumer, of New York, and Rep. Nancy Pelosi, of California, to extend the government's debt limit for three months.

"The president, I think, has demonstrated both in his business world and as president that he can make deals," said White House press secretary Sarah Sanders Tuesday during the press briefing. "He's going to work hard to make sure that we get the best deal possible on tax reform. And I think that starts with things like tonight — having this conversation and moving that ball forward, working bipartisan support from both sides."

Treasury Secretary Steven Mnuchin and Gary Cohn, the director of the National Economic Council, have been working for months with Republican congressional leaders to craft a tax proposal. Democrats have not been part of the process. So far, the discussions have produced only a two-page outline calling for cuts in both corporate and individual tax rates. The White House has left it to congressional tax-writing committees to fill in the details.

Even before that process is finished, Trump has been promoting the tax overhaul as a ticket to stronger economic growth. In addition to his North Dakota speech, Trump has campaigned for tax cuts in Missouri — another state he won last year. Aides say the president's tax cut tour may include visits to as many 13 more states in the coming weeks.