Accessibility links
'World Without Mind' Is An Urgent, Personal Polemic Franklin Foer's new book on the collision of technology and democracy is heavily informed by his unhappy 2014 departure from The New Republic, after its takeover by Facebook cofounder Chris Hughes.

'World Without Mind' Is An Urgent, Personal Polemic

'World Without Mind' Is An Urgent, Personal Polemic 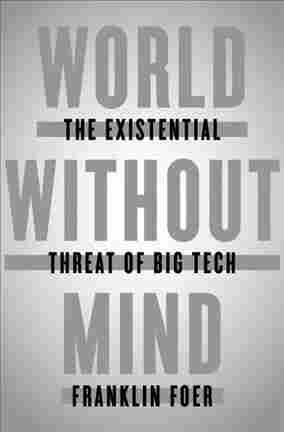 The Existential Threat of Big Tech

Franklin Foer's departure in 2014 from The New Republic, where he'd served as editor-in-chief for seven years, was not a peaceful one. The venerable liberal magazine had been purchased two years earlier by Facebook cofounder Chris Hughes. He ousted Foer in order to assume the helm himself, a move that provoked a highly publicized mass exodus from The New Republic's bullpen.

It's hard not to view Foer's new book, World Without Mind, as first and foremost a retaliatory broadside against Hughes and his ilk — that ilk being the nation's tech elite. Hughes, after all, is pilloried at length in the book, as are the founders of Amazon and Google. Then again, they would have to be, considering the thrust of World Without Mind: the alarming assertion that democracy and technology have collided, and democracy has come out on the losing end.

Foer accepts the widespread definition of tech's Big Four as Apple, Amazon, Facebook, and Google, but he focuses mainly on the last three. The lives of Amazon's Jeff Bezos, Facebook's Mark Zuckerberg, and Google's Larry Page and Sergey Brin leap from the pages of World Without Mind, as Foer conjures concise, insightful psychological profiles of each mover-and-shaker, detailing how they've mixed utopianism and monopolism into an insidious whole. He also offers compelling mini-bios of everyone from Edward Bernays, Sigmund Freud's nephew and the father of modern propaganda, to Stewart Brand, publisher of The Whole Earth Catalog and a massive influence on Silicon Valley.

This carefully assembled sequence of dovetailing narratives helps to humanize the more abstract parts of the book. The role of algorithms throughout the development of computer science and artificial intelligence; the paradoxical, collective libertarianism that underpins the economic philosophy of Silicon Valley; the history of the American left over the past half century as it overlaps with technology, from the anti-tech student protests at Berkeley in the '60s to the resistance movement of Trump's America: These topics and more form a broad and needed backdrop for Foer's argument. He's not just sounding the alarm; he's calling readers to action, asking us to begin "reclaiming our private authority over how we intellectually engage with the world."

That's easier said than done, of course, and even at his most persuasive, Foer doesn't pay enough attention to how activism might counter what he calls the tech industry's aspiration "to mold humanity into their desired image of it." By deciding what we consume, how we consume it, and even how we discuss what we consume, "their algorithms have pressed us into conformity," Foer contends. A threshold is about to be crossed, he says, if it hasn't already — and beyond that, it will become nearly impossible for us to extricate ourselves from a life where social media and centralized information have eradicated privacy, individuality, and free will. Naturally, George Orwell enters the conversation. But even at his most sensational, Foer modulates his hyperbole into the kind of lucid, absorbing exposition he fought to preserve while at The New Republic.

... even at his most sensational, Foer modulates his hyperbole into the kind of lucid, absorbing exposition he fought to preserve while at The New Republic.

"There's no doubt that this experience informs the argument of this book," writes Foer, speaking of his contentious time under Hughes at The New Republic. "I hope this book doesn't come across as fueled by anger, but I don't want to deny my anger either." In fact, his anger comes through loud and clear, especially in the section of the book devoted to his tenure at the magazine — which he holds up as an example of new media's ongoing attempts to raze traditional publishing.

That said, he doesn't let himself entirely off the hook, noting with regret how alluring the path of social-media-centric, corporate journalism was while he was at The New Republic. Foer has not presented a coolly considered and calmly debated case of persuasion; rather, World Without Mind is a searing take, a polemic packed with urgency and desperation that, for all its erudition and eloquence, is not afraid to roll up its sleeves and make things personal.