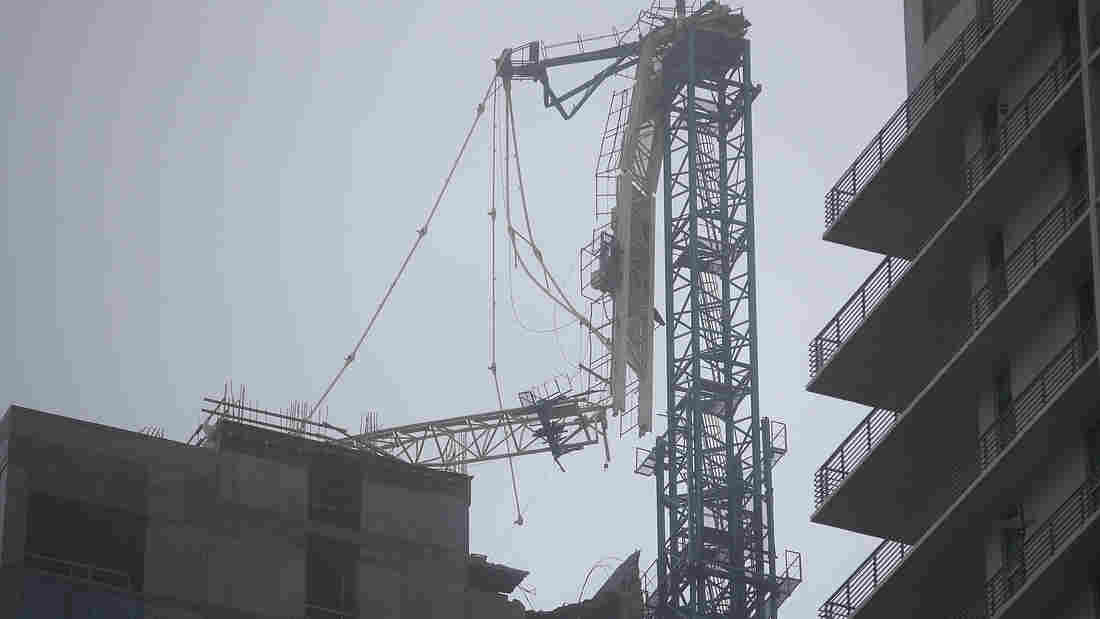 A crane tower after part of it collapsed during Hurricane Irma on Sunday in Miami. Joe Raedle/Getty Images hide caption 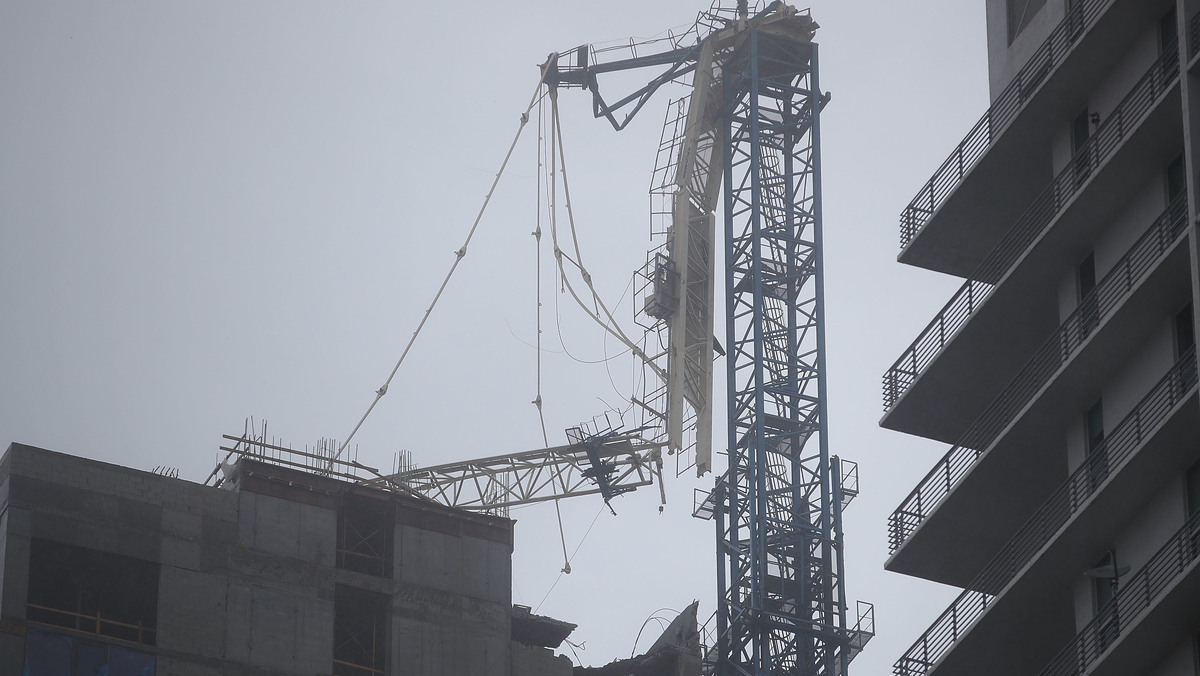 A crane tower after part of it collapsed during Hurricane Irma on Sunday in Miami.

In Miami, residents of two buildings near the site of a collapsed construction crane were forced to evacuate their homes Tuesday.

They're waiting for the damaged crane to be secured on the top of Gran Paraiso, a luxury high-rise condo building that's still under construction. Hurricane Irma snapped off the crane's arm on Sunday and left it dangling ominously, more than 40 stories up in the air.

It's one of three towering construction cranes in South Florida that were broken apart by Hurricane Irma: two in Miami, and a third in nearby Fort Lauderdale. No one was injured, but the storm whipped up a long-running debate about how to balance safety and economic development.

Towering construction cranes are a sign of the booming luxury real estate market in South Florida; there were 25 in the air above Miami when the hurricane hit.

But these latest failures are raising new questions about whether they're safe in major storms. In all three cases, the long arms of the crane snapped loose. At Gran Paraiso, multi-ton counterweights crashed to the sidewalk below.

"We really need to look at this. Because if it had been a direct hit, we could've had cranes down everywhere," said Miami City Commissioner Ken Russell, whose district includes two of the damaged cranes. Russell thinks now is the time to consider new safety rules.

"I don't want to wait until people die, or millions of dollars in damage when cranes come down everywhere unnecessarily, if a regulation can help with that," Russell said.

Miami-Dade County tried to impose tougher regulations on construction cranes a decade ago. But the industry fought the county in court, and won.

Jim Bryson, chairman of the Florida Crane Owners' Council, argues there are already plenty of federal regulations on the books. He was one of the plaintiffs in that suit and is the co-owner of Bryson Crane Rental Service in Daytona Beach, FL.

Bryson says tower cranes are designed to be safe in sustained hurricane-force winds up to 145 miles per hour. But he says you can't prepare for every scenario.

"Nobody exactly knows exactly what that storm could do at any given moment," Bryson said. "It could gust 300 miles per hour within buildings. And nobody would know that could happen. It's just nature."

Plaza Construction, the contractor on Gran Paraiso, called the storm "unprecedented" in a statement. But according to initial indications, top wind speeds from Irma did not exceed 100 miles per hour at Miami International Airport, well below what the damaged construction cranes were expected to withstand.

City investigators say it's too soon to determine exactly why these cranes failed. Before the storm, city manager Daniel Alfonso told member station WLRN that it wasn't practical to take all the cranes in the city down before Irma hit.

"To put up and take down a crane is a very significant effort. Streets have to be closed," Alfonso said. "Another crane has to be brought in. It's not something you can take down in 3 or 4 days. It requires significantly more time."

But Thomas Barth, a crane inspector based in South Carolina, disagrees. He says contractors in Miami could have brought in extra help from out of state to get the cranes down in time. They just chose not to, because that's expensive.

"Everybody knew this storm was coming," Barth said. "Why they didn't do anything? It goes right back to saving money."

The crane industry counters that new regulation would raise the cost of construction, which would be bad for Miami's economy. But City Commissioner Ken Russell, who's also chairman of the Miami Downtown Development Authority, says public safety should be the top priority.

"If those regulations mean it might cost a little more for that crane company, it's worth it," Russell said. "Because we do get hurricanes on a regular basis."