Accessibility links
VIDEO: Snot Otters Get A Second Chance In Ohio North America's largest amphibian, the Hellbender salamander, is in trouble. They are endangered in several states. A team in Ohio is trying to save them before it's too late.

Pick your favorite nickname for the Eastern hellbender salamander.

They're the color of mud, and they can grow up to 2 feet long. People call them snot otters because they're covered in a layer of slippery mucus. Or lasagna lizards, because the crinkly flap of skin on their sides that helps them absorb oxygen resembles a lasagna noodle. 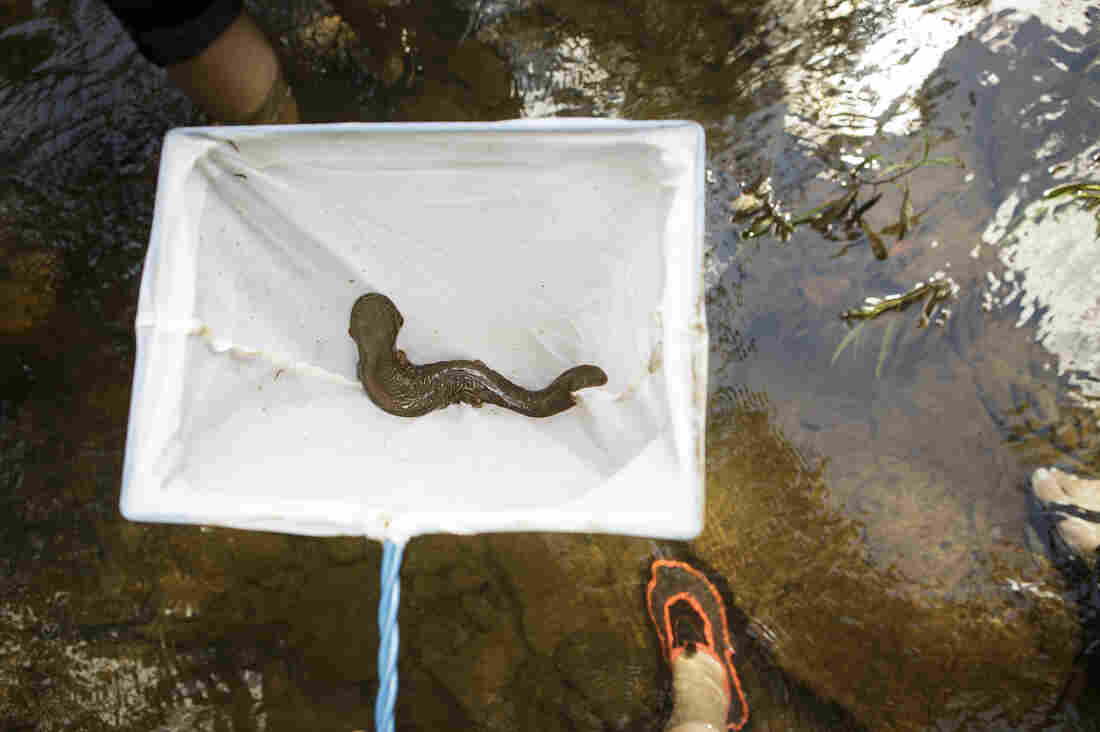 A baby hellbender on its way to its new home. Becky Harlan/NPR hide caption 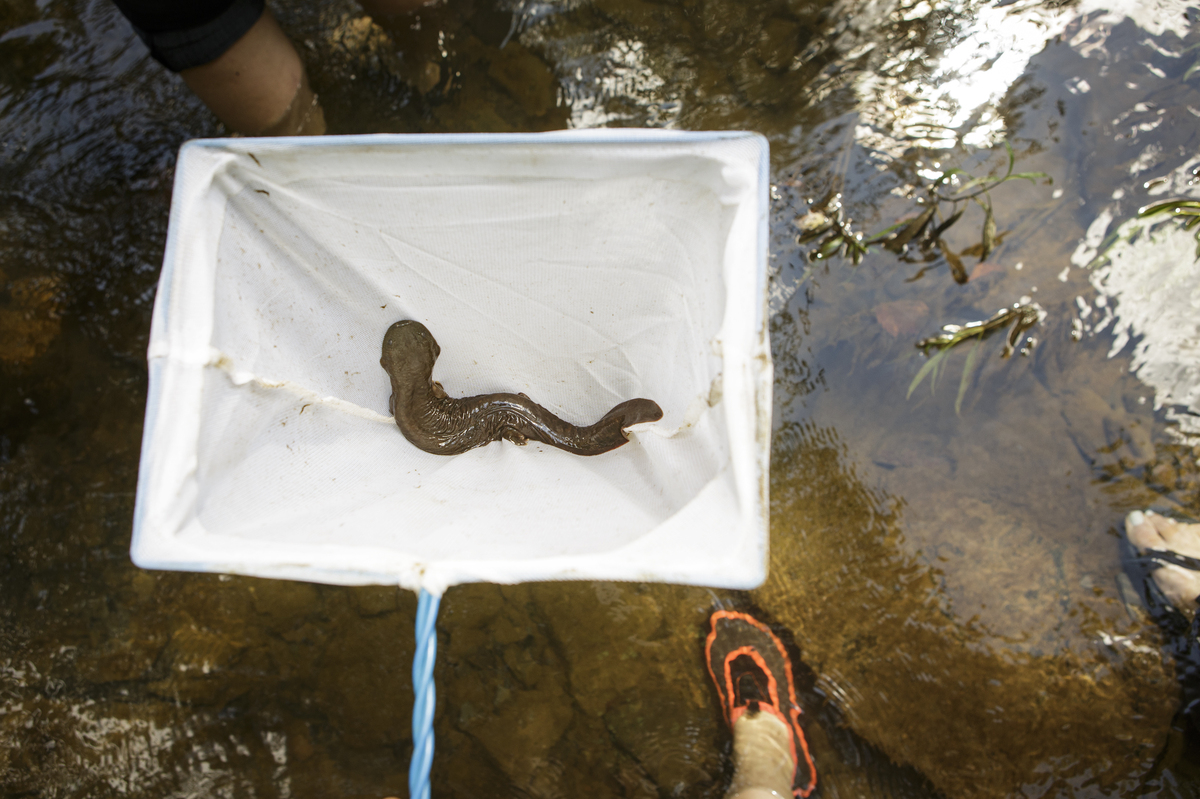 A baby hellbender on its way to its new home.

Eastern hellbenders live throughout the Appalachian region in the United States. Their ancestors have been on earth for around 160 million years, but in the last several decades their numbers have dropped dangerously in several states, primarily due to habitat destruction. Eastern hellbenders are endangered in Maryland, Missouri, Ohio, Illinois and Indiana.

"We started looking at hellbender populations in the 2000's and what we found is that they were declining rapidly, about [an] 82 percent decline," between 1998 and 2009, explains Greg Lipps, the amphibian and reptile conservation coordinator at The Ohio State University. "We knew if we didn't do anything that hellbenders were going to be gone in [Ohio]."

Lipps is part of a team that conducts "hellbender releases" in which baby salamanders are put into healthy creeks in Ohio. 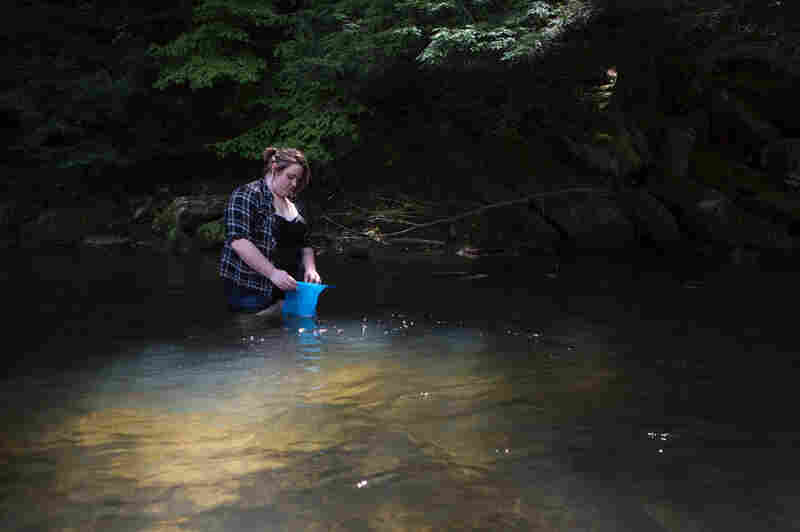 Tawni Duncan keeps a hellbender salamander in the water until it's ready for release. Becky Harlan/NPR hide caption 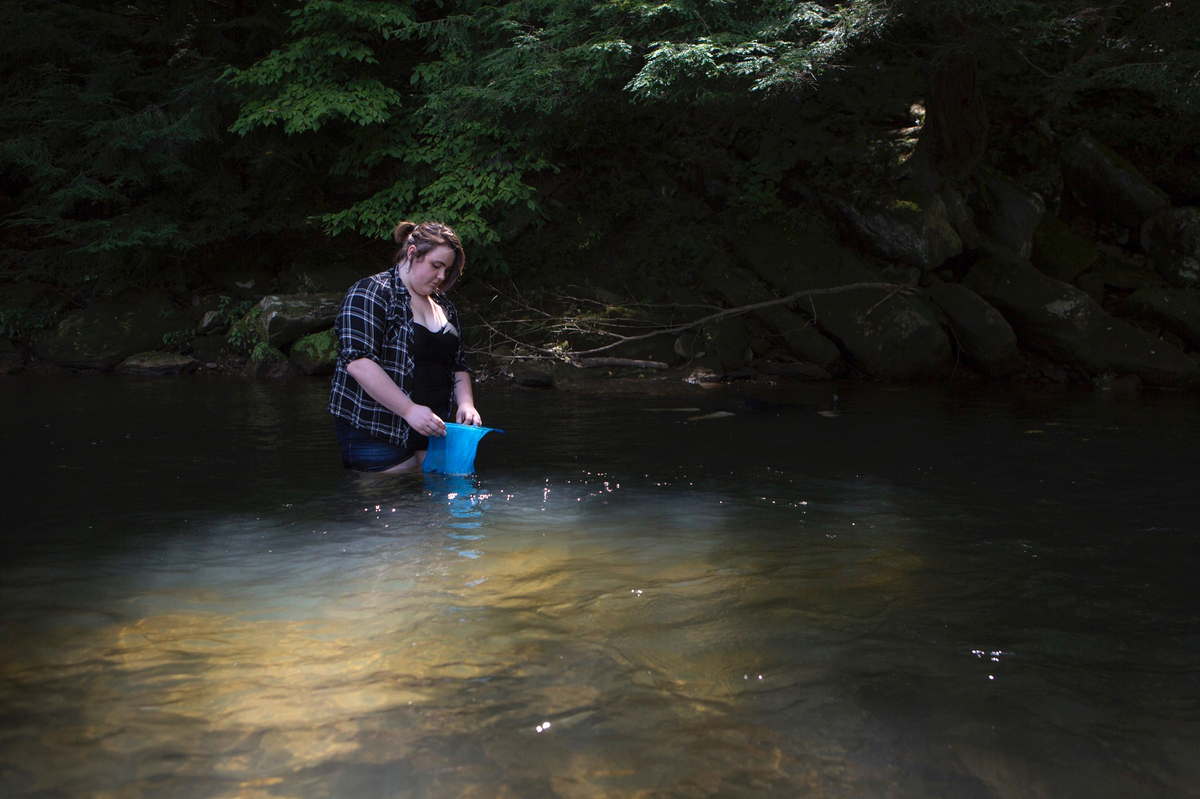 Tawni Duncan keeps a hellbender salamander in the water until it's ready for release.

"We want to remove hellbenders from the endangered species list here in Ohio. That plan has two big components. One is, we have to protect the good habitat. The second part of it is, we want to take these babies and release them back into the wild to bolster the populations. The two things are kind of useless without each other," says Lipps.

So, how does a scientist get his hands on baby hellbenders?

First, Lipps collects hellbender eggs from nests. Then, he teams up with the Toledo and Columbus Zoos in Ohio to raise the salamanders from eggs until they are big enough to stand a chance in the wild.

When the babies are about 3 years old, a team of zoo staff, members of environmental groups, scientists and local residents get together to release the hellbenders back into the Ohio creek system.

In August, at least 20 people huddled along a creek bank in southeastern Ohio waiting for Lipps to give instructions. Local kids jostled for position around coolers full of hellbenders, trying to get a quick look. 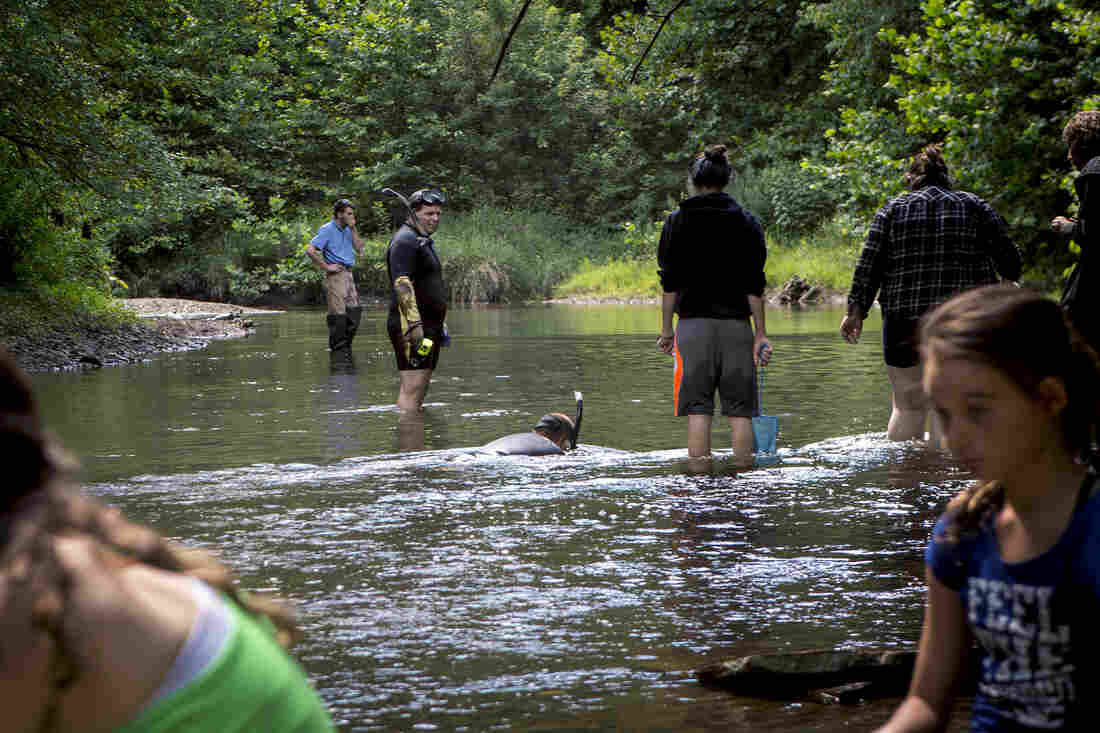 Members of Ohio environmental groups, zoo staff and people from the community all showed up to help introduce hellbenders to a new home. Becky Haraln/NPR hide caption 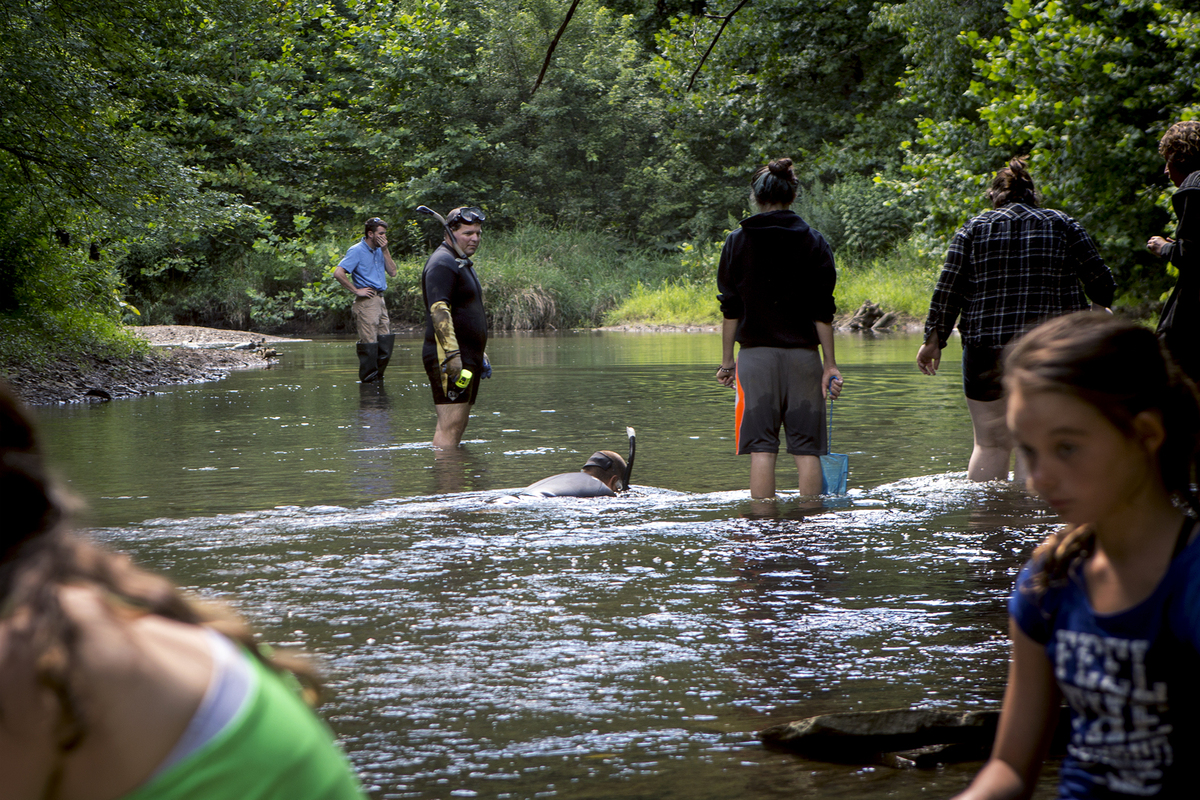 Members of Ohio environmental groups, zoo staff and people from the community all showed up to help introduce hellbenders to a new home.

Scientists in wet suits and snorkels made their way up the creek looking for suitable rocks to put the hellbenders under. When they found a good rock, kids carefully brought over the hellbenders in small nets.

The mood was hopeful and excited.

Each animal has a tiny transmitter beneath its skin, similar to a microchip in a pet. The transmitter allows the team to go back to the creek and monitor the hellbenders.

Lipps remembers the first time he did a hellbender release, "I went back and re-captured one of those animals, and realized 'We put it out here, and a year later I'm catching it and it has grown, and lived on its own!' I wasn't ready for the impact that would have."

"Wow," he remembers thinking as he looked at the healthy salamander, "this animal is now at home." 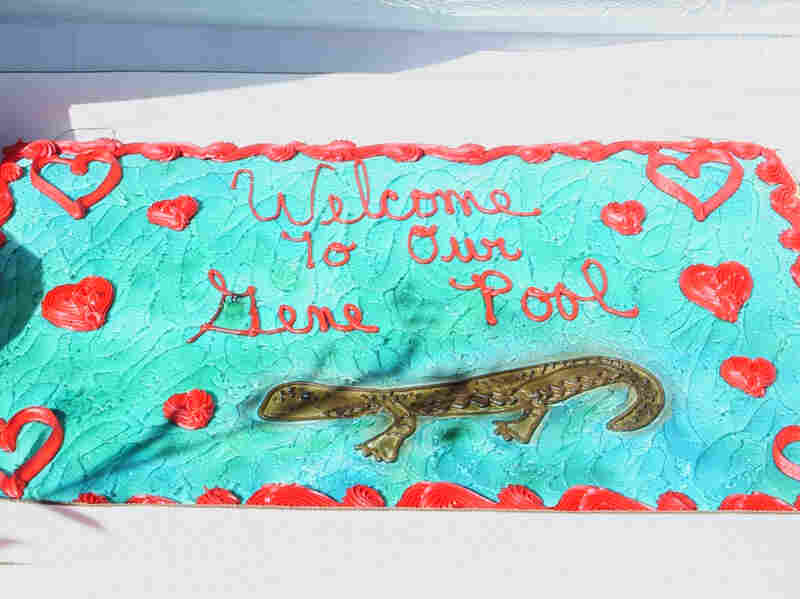 Lipps and other scientists caution that, although releases are helpful, there is a lot more to be done to assure threatened amphibians bounce back. Hellbenders aren't the only amphibians in trouble. It's estimated that a third of all amphibian species are in decline. Habitat destruction, pollution and disease are some of the players to blame.

"What we're doing today [is] we're buying ourselves time," says Lipps. "These animals are going to survive about 30 years, which gives us a lot of time to get the creeks cleaner."

After the last hellbender was let go at the August release, the entire group gathered around to eat cake. It had a picture of a hellbender on it, and said in icing "Welcome To Our Gene Pool."

Hopefully the newly released salamanders will grow up, find mates and expand that gene pool by making lots of little snot otters and lasagna lizards of their own.