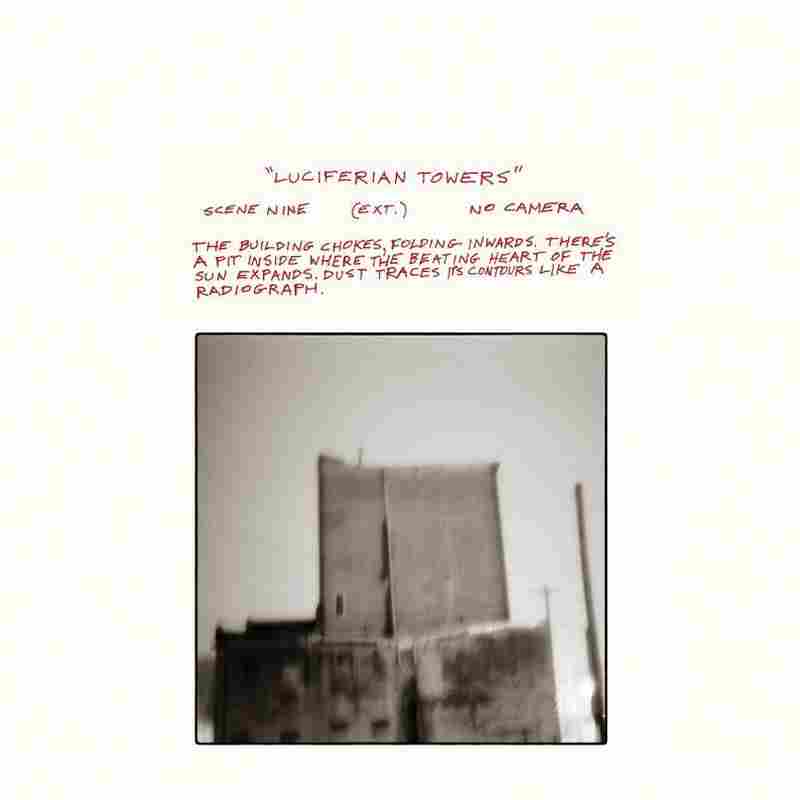 With Godspeed You! Black Emperor, the question is easy: Where do you even begin? For nearly a quarter century the shifting, roughly nine-member Canadian collective has been releasing swelling, torrential compositions that also gracefully loom, like a dewed spiderweb, squaring the circle of neo-classical and punk rock. It is demanding, complex, wordless music, directed in part at the off-switch of the information age. Godspeed — a project that, remarkably, exists completely on its own financial and creative terms — expects an interpretive exchange from its listeners, and rewards surrender to the transaction. This is music that's not a map but an unreliable compass, precise in its dissonance and generous with its emotions.

Luciferian Towers, its sixth official album, is cut roughly into two parts: the not-subtly-titled "Bosses Hang" and "Anthem For No State." The record is introduced with "Undoing A Luciferian Towers" — a subtle plaint that scribbles into the anthem for a nation of bombed-out skyscrapers — and split by the entr'acte "Fam_Famine," an anxious, addled crest built from rust-dust and dirt motes. Both pieces serve as Luciferian's connective tissue, and share a principal melody and momentum, like a giant lumbering over a forest.

"Bosses Hang" is a 15-minute instrumental elegy (what Godspeed song isn't?) in three parts, following a well-established template for the group: a shivering, dense shadow dance between quaking percussion, heavy-in-the-mix strings and textural guitar work, all building to a bright, liminal horizon.

"Anthem For No State," also in three parts, is one of the most beautiful things that Godspeed has ever put down. Its first section unfolds like the sun rising on a new life, before the piece shifts into a passage driven by a tremolo-fueled, Wild-West guitar line. The third movement (and album finale) crashes into a wall of squall that's classic Godspeed, save for the resolve of its shuddering mortar.

If the song titles weren't a giveaway, GY!BE projects an embittered political viewpoint atop its vast and stormy ocean. Of "Bosses Hang," the group writes: "more of us than them! also – what we need now is shovels, wells, and barricades!" They describe "Anthem For No State" by addressing their home country: "kanada ... a crippled thing, drowning in a puddle, covered in ants. the ocean doesn't give a s*** because it knows it's dying too." You can find this bubbling rage in the group's music, too; it's there in the power of the collective, in its dissonance (like petting a shark the wrong way), in the non-condescending, pastoral imagery it generates.

Godspeed You! Black Emperor's dissonance, often paired with grand resolution, can feel like attempts at manifesting real-world beauty through sheer will. Luciferian Towers brought to mind the useful (but often insufferable) cultural philosopher Theodor W. Adorno. In his "Aesthetics" lectures in the late 1950s, he referred to the "dark, shocking, alienating and in many ways repulsive" art he saw and heard around him at the time. He tied it to the "constant threat of disaster under which we all live," a time of space-racing and nuclear armament as the dust settled on a new post-war world order. In the midst of that, he said of art that failed to challenge itself and the world around it: "a harmonistic art, an art that simply idealized existence with its forms, would inherently take on a quality of impotence and nullity which any art seeking to be a genuine manifestation of truth must rebel against with the utmost vehemence."

Then again, after comparing their creative process to that of an auto mechanic's garage, the group was asked by The Guardian whether or not people take its music too seriously. Godspeed responded: "Probably."