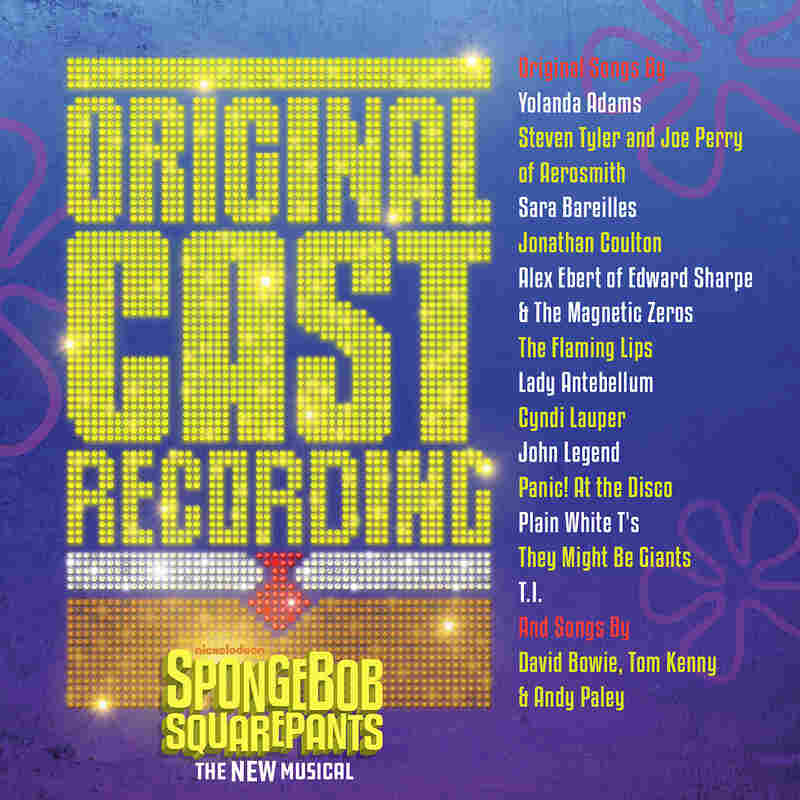 Instead, after a quick prologue, the SpongeBob album gets underway with "Bikini Bottom Day," written by Jonathan Coulton. (Disclaimer: Coulton works for NPR on Ask Me Another, and I know him well enough that we say "Oh, hey!") Like nearly all the songs in the show, which opens on Broadway in November after a successful run in Chicago, "Bikini Bottom Day" is a new song brought to the stage by an established artist. In addition to Coulton, composers include Sara Bareilles, Joe Perry and Steven Tyler of Aerosmith, T.I., Alex Ebert of Edward Sharpe and the Magnetic Zeroes, members of Plain White T's and Panic! At The Disco and The Flaming Lips and They Might Be Giants and a bunch more. And on top of all that original music, the show includes David Bowie and Brian Eno's "No Control."

The story is cartoon-worthy, with a volcano threatening to erupt, a rock band, and a desperate need for SpongeBob and friends to save the day. You certainly do not need to understand it in order to understand the album.

What's clever, and ultimately satisfying, about the music is that all of the composers have bent their music to fit Broadway and to sound like kids' entertainment, while still sounding recognizably like themselves. "Bikini Bottom Day," for instance, has Coulton's playful rhymes and sunny melodic openness, while "BFF" has the Plain White T's' version of the pleasantly ingratiating acoustic-dude chill that's become ubiquitous since the mid-aughts. (Side note: I like to think all these post-John Mayer bands will spend their golden years in a touring nostalgia production called the Nice Capades.)

There are also some songs where the translation is less direct. There's no obvious musical similarity between Alex Ebert's "Daddy Knows Best," and his band's songs like "Home," but if you've ever seen them perform, you know that there's a certain ecstatic old-timey honk in their DNA, like they're perpetually about to tell you the tale of a feller who got himself in some trouble. "Daddy Knows Best" doesn't echo their best-known music, but it fits with Ebert's identity.

It's hard not to be delighted just by the talent that was assembled here. Yolanda Adams contributes a gospel jolt, and frankly, every musical is better with a gospel number in it, provided it comes from someone who knows what they're doing — like Yolanda Adams. The country song comes from Lady Antebellum, and the ballad is from John Legend. The screamer is from Aerosmith. In other words, you're in good hands.

There's a lot here that's likely to delight kids, including those who have found Broadway recently. If your kid likes the rap in Hamilton, it's well worth sharing with them T.I.'s "When The Going Gets Tough," which has its own repeatable phrases and word tangles that are fun to wrap your mouth around.

And of course they close with a take on the theme song. We do live in a society here.