Accessibility links
In Frederick Wiseman's 'Ex Libris,' The New York Public Library Gets Checked Out The prolific documentary filmmaker's latest project goes behind the stacks to offer a comprehensive, multi-faceted — and overdue — examination of the NYPL as an institution. 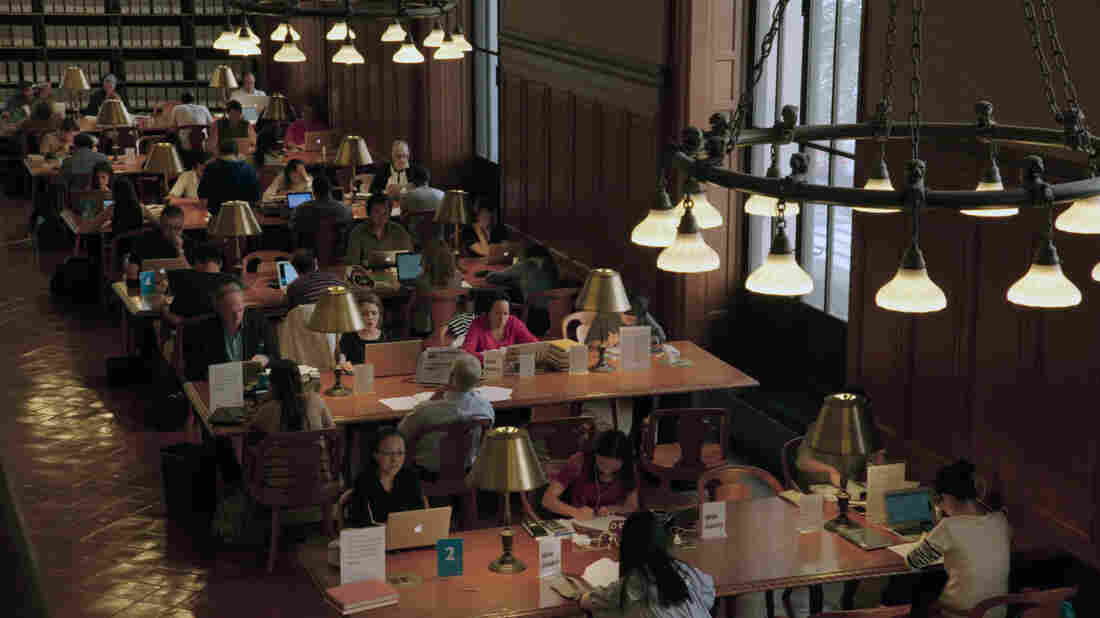 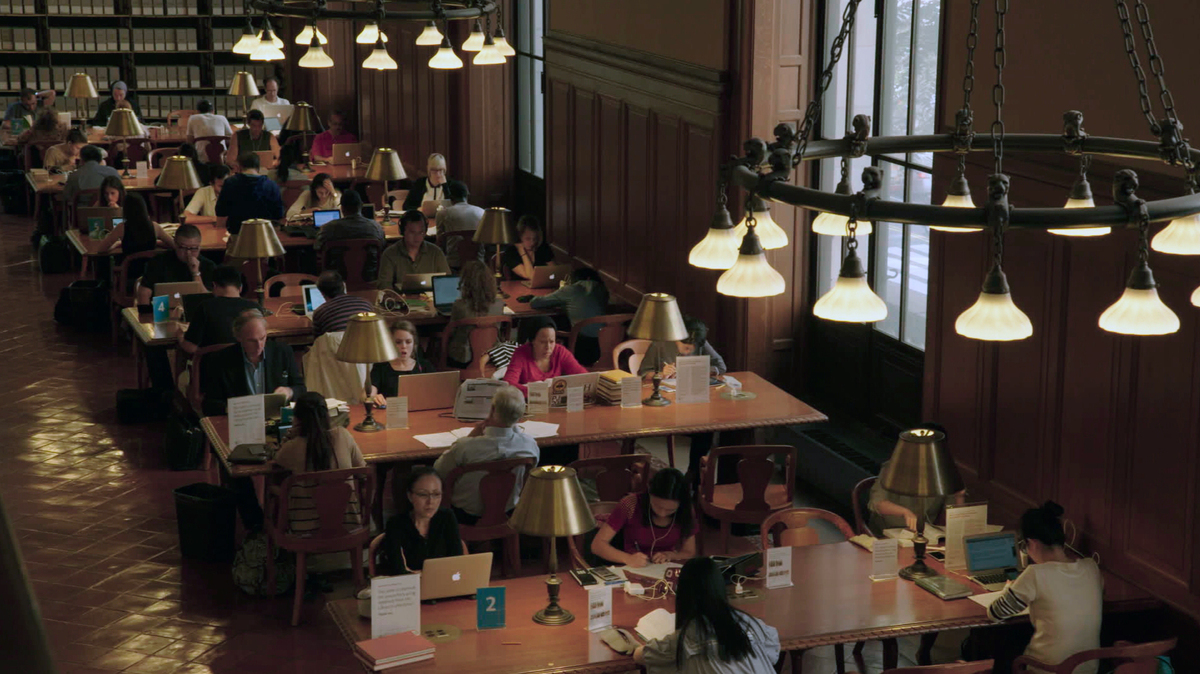 Not a single person says "shhh!" during Frederick Wiseman's three-hour-plus tour of New York libraries. In fact, Ex Libris: New York Public Library immediately introduces garrulous author, scientist, and atheist Richard Dawkins, and there are a half-dozen other talky authors waiting in the wings. In this documentary, chatter among the stacks is encouraged.

Wiseman has directed more than 40 features in 50 years; stylistically, Ex Libris is characteristic. No interviewer asks questions of the subjects, nobody directly addresses the camera, and none of the participants is identified by either text or narration. The fireman who encourages Bronx residents to apply for municipal jobs is just as important — at least in the way he's presented — as Patti Smith, Ta-Nehisi Coates, Elvis Costello, or Edmund de Waal.

The movie features more writers than books. There's a look at the semi-automated system for sorting printed and other materials, but much more time is spent with computers, mobile hot spots, and discussions of the demand for e-books. More than once, Wiseman shows the way many people these days interact with the library's stately main building: by snapping pictures of it.

Wiseman visits about a dozen NYPL facilities in Manhattan, the Bronx, and Staten Island. (Brooklyn and Queens have separate systems.) These include such specialized collections as the performing arts library at Lincoln Center, which is apt, since the film has lots of music and dance: a chamber music recital, a dance class set to Kool and the Gang, and an attempt to get toddlers to sing along with "Old McDonald Had a Farm."

The theme, of course, is communication. A seminar on signing for the hearing impaired demonstrates two different ways of delivering the same text. At the center for blind patrons, we hear a man record a racy bit of a Nabokov novel. In Chinatown, people with limited English fluency learn computer skills. Uptown, librarians discuss how to reach the most difficult patrons of all: teens.

Some of Wiseman's earlier documentaries observe serious conflicts, but in recent years the director has turned his attention to such large and mostly well-loved cultural institutions as museums and ballet companies. This film repeatedly drops in on meetings of the library system's top administrators, who discuss funding issues, areas where improvement is needed, and problems beyond the system's grasp. (New York's library, it seems, has been charged with ending the city's digital divide.) But voices are never raised — except by one slam poet.

Indeed, the exchanges are uniformly earnest, whether the subject is slavery, porcelain, or Jewish delis. There are just afew comic moments: A library help-line worker gently explains to a caller that unicorns are imaginary, and Dutch architect Francine Houben (whose firm is set to revamp the main building) announces that she has "many ideas" about libraries and then proceeds to demonstrate that she doesn't.

As usual, Wiseman establishes a steady if unsystematic rhythm. Some scenes are glancing; others linger to allow a fuller discussion. The chronology, such as it is, seems to be seasonal: summer in Bryant Park, behind the main library, followed by a Halloween parade on Fifth Avenue and finally a Christmas tree inside the lobby. But sometimes we return to a place and time we've apparently visited before.

The administrators' meeting or meetings, for example, begin to feel redundant. So do many of the establishing shots of various libraries' neighborhoods. Yet Ex Libris's graceful exit suggests that Wiseman always knew exactly where he was headed.