Accessibility links
Law Enforcement Uses Garbage Trucks For Safety During Large Gatherings Law enforcement officers are using the trucks to prevent vehicle attacks like the one in Charlottesville that killed one woman and injured several other people. 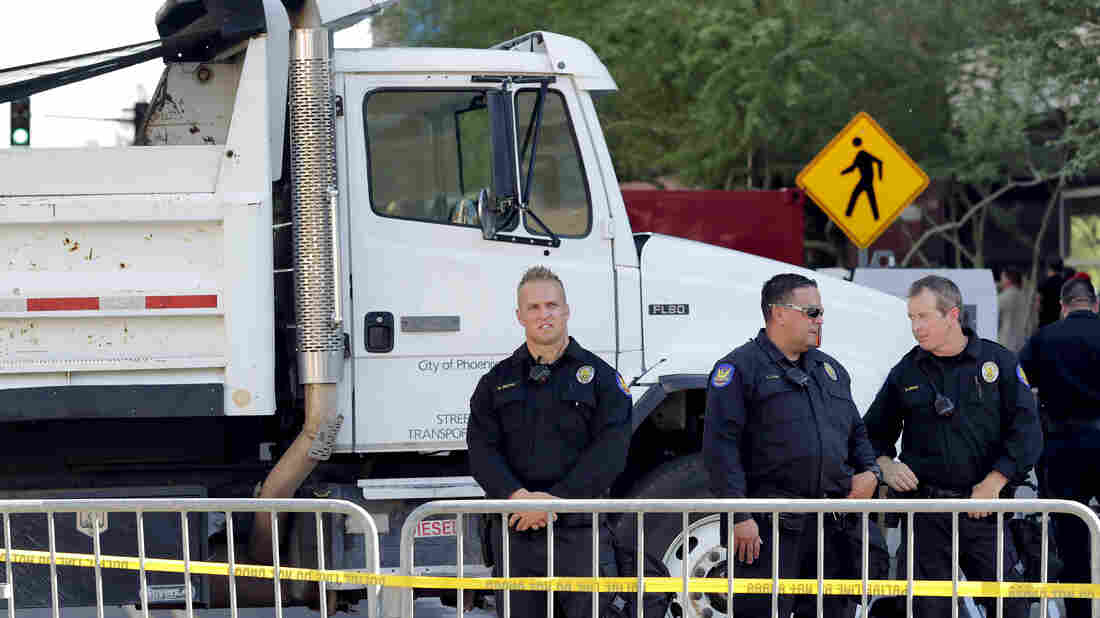 Phoenix police officers stand beside a dump truck blocking a road outside the Phoenix Convention Center on Aug. 22. Protests were held against President Trump as he planned to host a rally inside the convention center. Matt York/AP hide caption 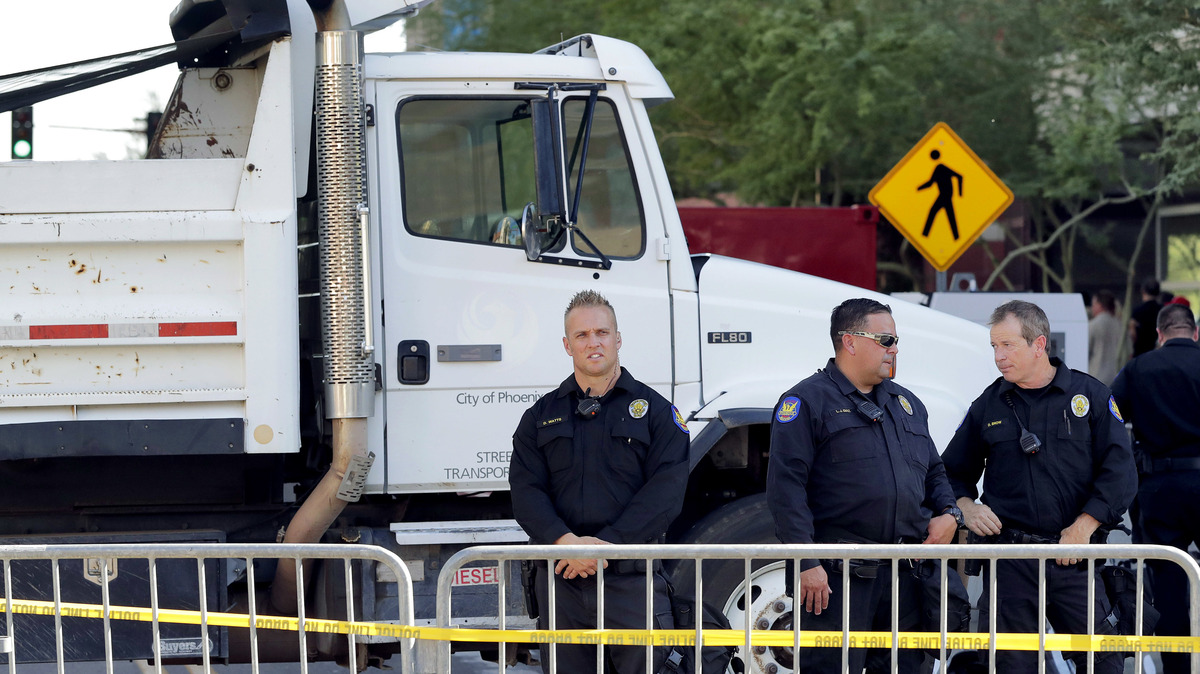 Phoenix police officers stand beside a dump truck blocking a road outside the Phoenix Convention Center on Aug. 22. Protests were held against President Trump as he planned to host a rally inside the convention center.

But to police departments around the country, it has become a cutting-edge tool in law enforcement.

"More and more, we're seeing attacks both in the U.S. and abroad where vehicles are utilized," says Daniel Linskey, a retired Boston Police Department superintendent in chief who now works for a security management firm called Kroll Associates.

He points to the lethal examples of cars running into crowds in Nice, France, in London and in Charlottesville, Va., among many others over the past few years.

Linskey is no stranger to traumatic situations. He was the incident commander during the Boston Marathon bombings in 2013. Increasingly, he has seen police departments deploy garbage trucks, dump trucks and sand trucks as a form of crowd control, in places as wide-ranging as Centerville, Ohio, to Berkeley, Calif. Even the Trump Tower in Manhattan has been encircled by trucks for security.

"They're effective because they're heavy duty," Linskey explains. "A lot of things can push up against them but very few, if any, are going to move them."

Furthermore, Linskey adds, it's sensible for police departments to cooperate with public works.

"It's definitely a way to utilize existing resources in an effective, efficient manner and supplement law enforcement's ability to keep people safe," he says.

People like Mia Ives-Rublee, an activist who has been to at least 10 demonstrations this year and who helped organize January's Women's March in Washington, D.C. She pointed to six bills pending in various state legislatures that would protect drivers who hit protesters, including in North Carolina, where she lives.

"I've been to a couple of protests where there've been agitated car drivers," she says. "It can get scary out there."

Ives-Rublee is in favor of deploying garbage trucks to help secure streets during demonstrations and protests. As a wheelchair user, she says she can brace against a garbage truck in a crowd situation. And trucks can move quickly to accommodate ambulances.

"It's unfortunate we live in a society where we even have to think about protecting people all the time," Linskey says.

But he cautioned that there's no way to completely protect protesters from people who want to drive into them.

"The best way we can defeat those who use these tactics is to come out for these big events. Fill the streets. Fill sporting events. Fill arenas."

And while you're there, Linskey adds, maybe spare a thought not just for the garbage trucks drafted as police vehicles, but the regular ones that clean up behind us every day.