Accessibility links
Movie Review: Jennifer Lawrence And Javier Bardem in Darren Aronofsky's mother! Darren Aronofsky's new film mother! is not subtle and not careful. But like a lot of art, it lives right on a dangerous spot where too much daring is just showing off.

'Mother!' And The Cliffs Of Audacity

'Mother!' And The Cliffs Of Audacity 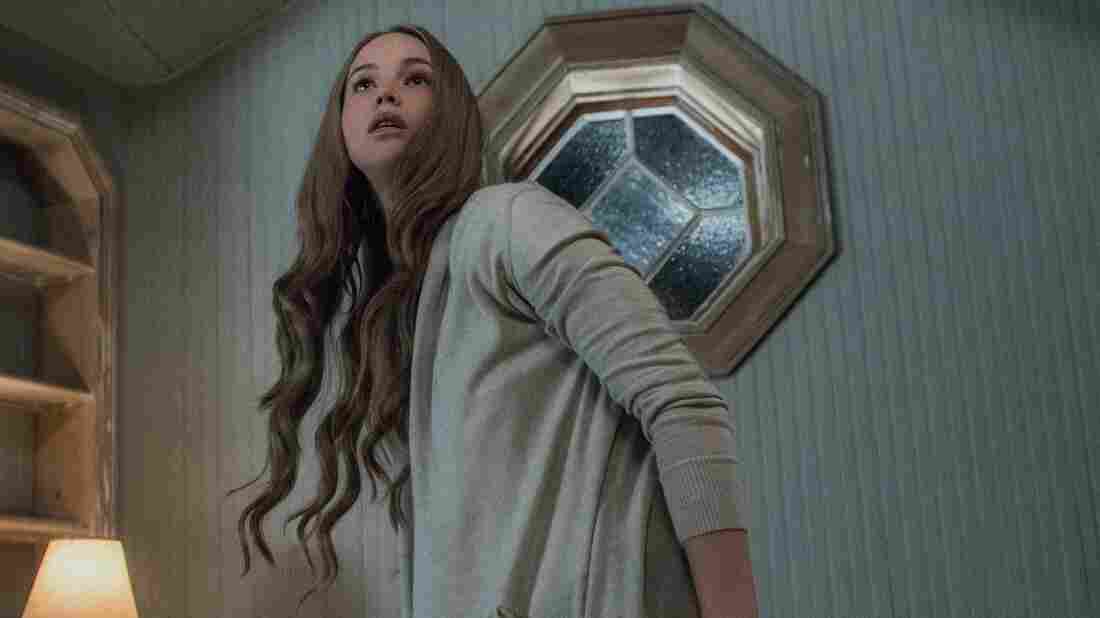 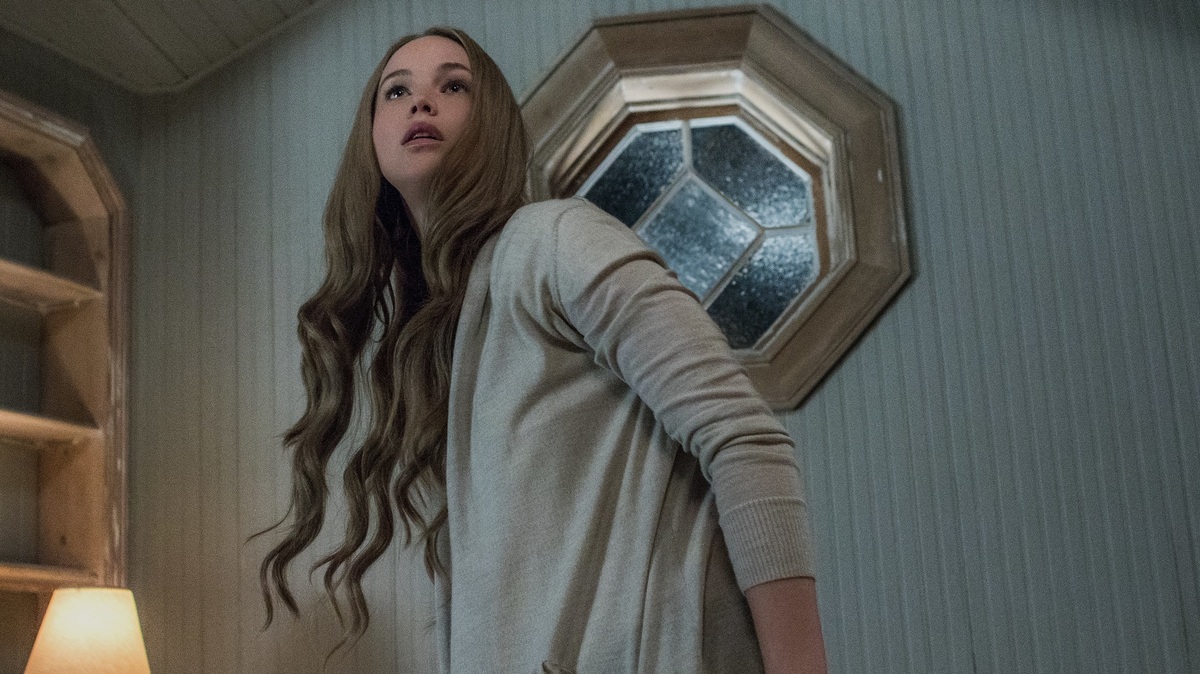 Things are getting creeeeeeepy for Jennifer Lawrence in Darren Aronofsky's new film, mother!

What is it fair to reveal about Darren Aronofsky's new film, mother!? Certainly what little the trailers and marketing have given away, which is that it stars Jennifer Lawrence and Javier Bardem as a couple (identified only as "Mother" and "Him") living in a house where something is not right. Probably that a Rebecca Solnit adaptation of The Lord's Prayer called Mother's Prayer was handed out on a thick card before the film screened at the Toronto International Film Festival. There is no chance that Aronofsky didn't know that this positioned him to look like a cornball, like a try-hard. Before the film even started, Aronofsky was inviting one of its earliest audiences to find it insufferable, overdetermined, pretentious and vain.

It may well be all those things.

Aronofsky has labored to keep secret what it is that's wrong in the house Lawrence and Bardem share, revealing in the trailer little more than that they receive strange visitors, played by Ed Harris and Michelle Pfeiffer. He shows us flashes that make mother! look more like a straightforward horror film than it is. Little of it, in fact, has the rhythms of horror, even if it has quite a few of horror's tested visuals.

The first hour or so of the film, its stronger segment, has the discomfiting tilt of those spooky, unmoored trailers. It brilliantly — and with exquisite restraint, despite Aronofsky's defining tendencies toward spectacle, which remain — makes real Lawrence's unrelenting sense of invasion and imposition. To the degree the film announces itself as horror, it's the horror of social transgression, done bit by bit. Lawrence plays Mother as frightened not by terrible sights or noises so much as by her discovery that her expectations about mundane interactions with strangers and intimates alike are no longer shared.

After that, well ... that's the part that, understandably, has been kept quiet. Not because it's a jump reveal, but exactly because it's not, because it's a progression, and you're better off not knowing the checkpoints, let alone the endpoint. Suffice it to say the restraint is surrendered.

Perhaps the right adjective for mother! is "audacious." When you talk about audacity in film, you have to distinguish it from pure idiosyncrasy. When a director is making a highly experimental art film meant for museums — the kind people cluck about where, har-har, it's six hours of someone cracking eggs onto a cat's head or whatever your stereotypical vision may be — she's making it for an audience that invites its own bafflement. People in a museum don't expect to necessarily know what's going on; they are looking for art with art's blind alleys and unanswered questions. It's not necessarily daring to give those things to them.

But when you are Darren Aronofsky, or Jennifer Lawrence, or Javier Bardem, and when you are releasing your film into multiplexes that are showing It and Home Again next door, and when you will be competing at the Oscars with films that contain rousing speeches audiences and on-screen characters alike will literally applaud, you are leading with your chin in a different way. You are inviting yourself to be judged by the rules of entertainment and not only the rules of art.

"Audacity," despite a certain critical and popular tendency to look at art as a puzzle to be solved, isn't the same thing as "inscrutability." Sometimes, quite the opposite. From the moment when, as a teenager, you feel the weight of something like the leaden Christ imagery in Melville's "Billy Budd, Sailor," your brain begins to build a scale that plots the effectiveness of broad allegory as well as specific symbolism according, in part, to its capacity to be present without being announced. You learn, by feel, when metaphors are so dense and clumsy that they turn into cudgels. Among a lot of critics and film aficionados, nothing is more verboten than an overabundance of metaphorical clarity. It's treated as the mark of not only an amateur, but an impostor: the self-styled fancy-pants, the aspiring artiste, flying too close to the sun.

By contrast, it's actually relatively safe — and consistently respectable — to make films in which the story you're figuratively telling is connected so tenuously to the story you're literally telling that people almost pride themselves on their uncertainty that they have a clue what you're on about. A lack of thematic integrity can be, in some cases, successfully passed off as overshooting the mark by making a film too sophisticated to be understood. By the same token, there are filmmakers — Terrence Malick is one — who earn such faith in their vision over time that they can experimentally elide any literal signaling at all and have faith that the viewers they really care about will lose faith in their own capacity to interpret before they lose faith in the filmmaker's capacity to communicate.

Aronofsky, on the other hand, is still approached with some caution. His work is consistently anticipated, but more curiously than confidently. His hand can be heavy, both when he is and when he isn't successful. And indeed, one of the most audacious things about mother! is that Aronofsky is not hiding the ball, in the least, when it comes to what he's talking about. That's one of the reasons he wants to keep the back half of the film quiet. When you see it, you will know what it's about, or at least some of the things it's about. And to the degree the film is hard to read, it's more because it's attitudinally oblique than because it's symbolically secretive. There are some exceptions: there are individual objects and actions that don't entirely fit the broader story Aronofsky seems to be telling. But for the most part, at the end, he's come clean about the keys you need to unlock the allegorical underpinning — or underpinnings. The times when mother! feels the most mischievous are the times when it's the most impolite and obvious, like a kid opening his mouth, BLEH!, to show you chewed-up food.

It seems fair at this point to confess to having described this film to someone recently as "barely not [nonsense]," where [nonsense] was a more impolite term. This was meant as a compliment. The concept of a film, or of any work, being "so bad it comes back around to good," or words to that effect, isn't new. It's handy because it reimagines quality in a couple of dimensions, where total artistic failure can still be experientially delicious. (See also The Disaster Artist, James Franco's movie about the filming of the famously terrible The Room.)

mother!, though, suggests that audacity as an admirable quality isn't even a circle, looping back around in the manner of a slowly building fiasco. Audacity, in many cases, is a cliff. It's not that mother! is so bad that it's good; it's that audacity increases as a filmmaker comes closer and closer to that collapse into [nonsense], and in the end, all you're arguing about is whether he stopped one step before, or one step after, the edge. Either he is a genius, or he is Wile E. Coyote, suspended in midair, holding up a painted sign on a wooden stick that says "BUT I'M A POET."

Aronofsky, here, is a step from that edge. Maybe half a step. Either the film has one guttural shriek too many, or it stopped at the last possible breath.