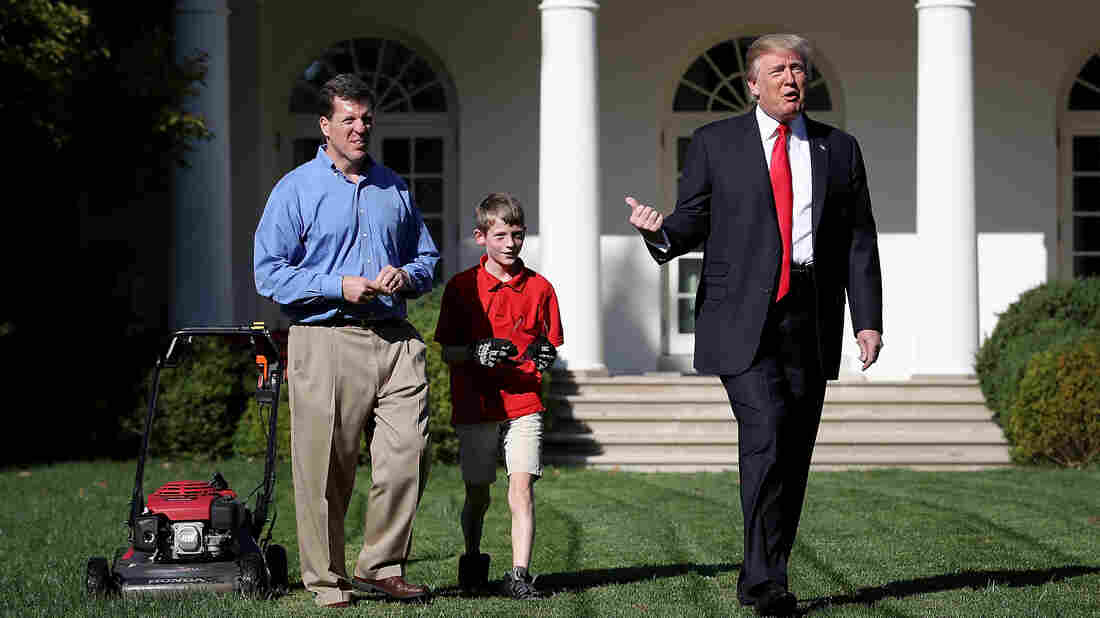 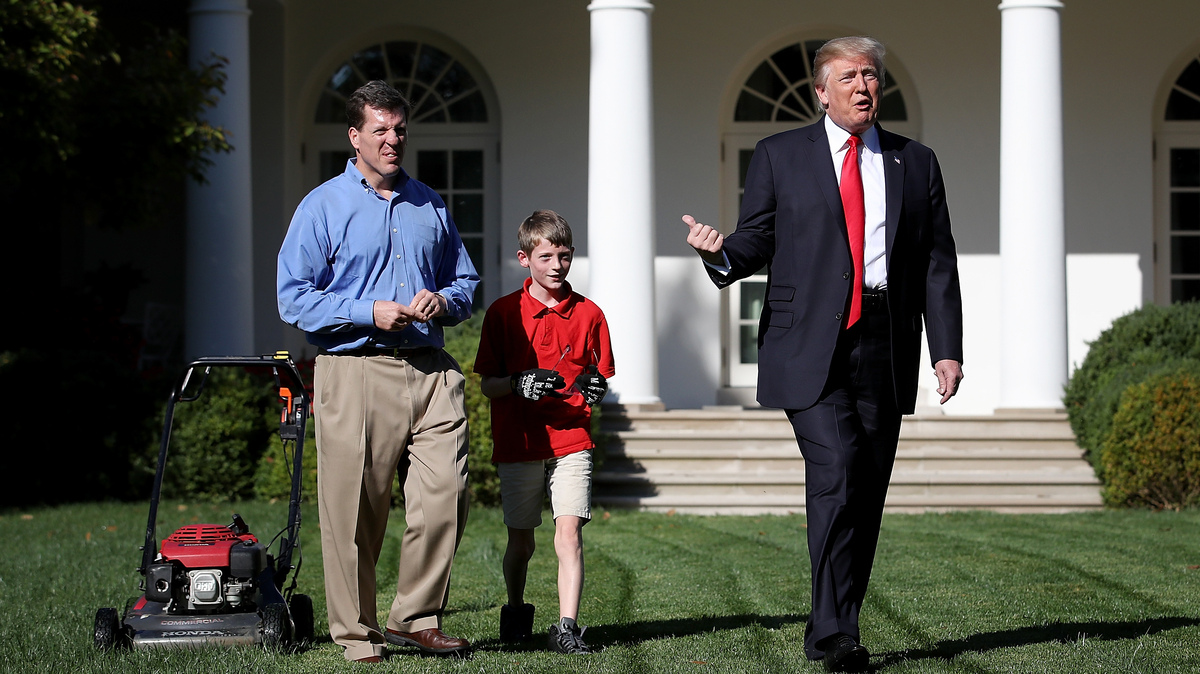 Eleven-year-old Frank "FX" Giaccio walks with President Donald Trump while mowing the grass in the Rose Garden of the White House on Friday. Also pictured is Frank's father, Greg Giaccio.

Tens of thousands of people write letters or emails to the White House each day. Only a handful make it to the president's desk.

But when someone offers to mow your lawn for free, it gets your attention. Especially when that someone is only 10 years old.

Frank "FX" Giaccio made that offer to the president this summer saying, "I'd like to show the nation what young people like me are ready for."

Impressed, Trump invited Frank — who has since turned 11 — to spend a morning with the White House groundskeepers. And after donning work gloves and safety glasses, the young man went to work Friday trimming the grass outside the Oval Office in the Rose Garden.

"We're lucky," Trump said after watching Frank for a few minutes. "That's the real future of the country."

Frank had offered to bring his own mower and weed whacker, but the National Park Service, which maintains the White House grounds, supplied all the tools he needed.

"It was good, apart from the blazing hot sun," Frank said afterwards. "The good thing was there were no hills."

This was not Frank's first lawn-mowing rodeo.

After watching his dad do yard work for years, Frank was finally deemed old enough to operate a power mower this summer. He quickly showed his own entrepreneurial powers, passing out flyers in his Falls Church, Va., neighborhood in the D.C. metro area and lining up two neighbors as weekly mowing customers.

He pockets about $20 a week, which his dad calls good money for an 11-year-old. But Frank wanted more.

"'I could really grow my business if I wrote President Trump,'" Gregory Giaccio recalls his son telling him. "I was sure he'd get a form letter [back], which is more than enough."

Both Frank and his dad were surprised and pleased last month when White House spokeswoman Sarah Huckabee Sanders read his letter aloud during a televised press briefing.

So far it's gotten him a handshake photo in the Oval Office with the president, a spate of TV interviews and a laudatory tweet from Trump that included a slick video produced by the White House.

Frank “FX” Giaccio-
On behalf of @FLOTUS Melania & myself, THANK YOU for doing a GREAT job this morning! @NatlParkService gives you an A+! pic.twitter.com/135DxuapUI

Priceless memories, his dad says. And priceless marketing for his nascent lawn-mowing business.

Frank is still trying to decide how he'll spend the money he made this summer — perhaps on a big Lego set or a smartphone.

While he didn't charge for the Rose Garden job, the groundskeepers let him keep the work gloves. And two Park Service employees confirmed that Frank did an excellent job.