Accessibility links
Republicans Are Happy Trump Ended DACA. They're Less Sure About Deporting DREAMers Polls broadly suggest that Republicans are more upset about the existence of the DACA program than about the underlying substantive concerns that led to creation of it. 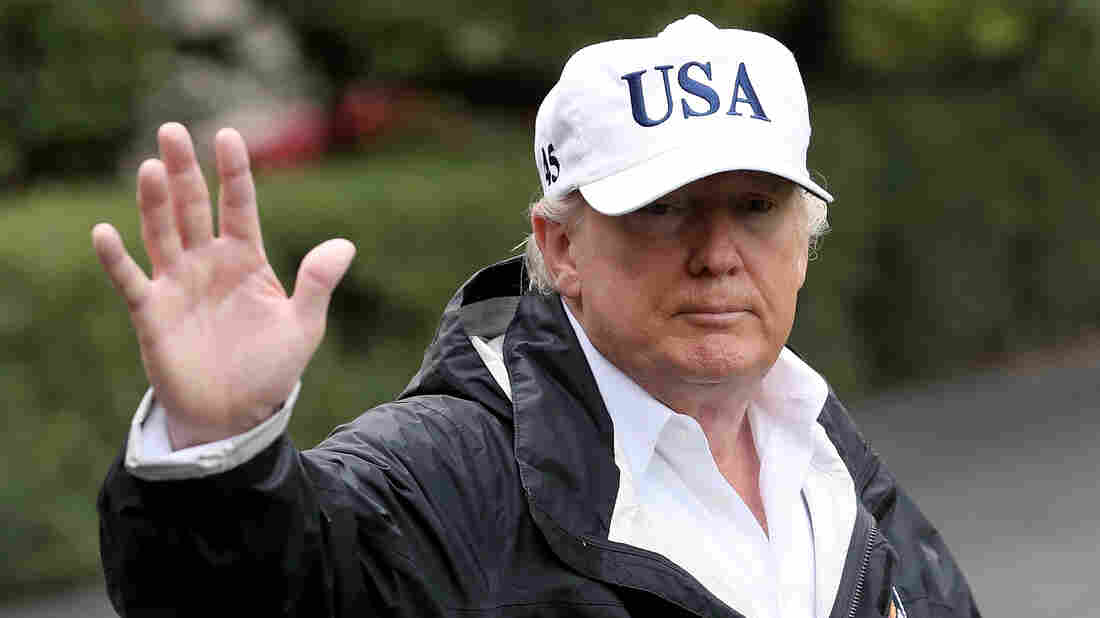 Amid his travels to hurricane-battered Florida, President Trump was repeatedly asked to explain what steps he hopes to take on the DACA program. Win McNamee/Getty Images hide caption 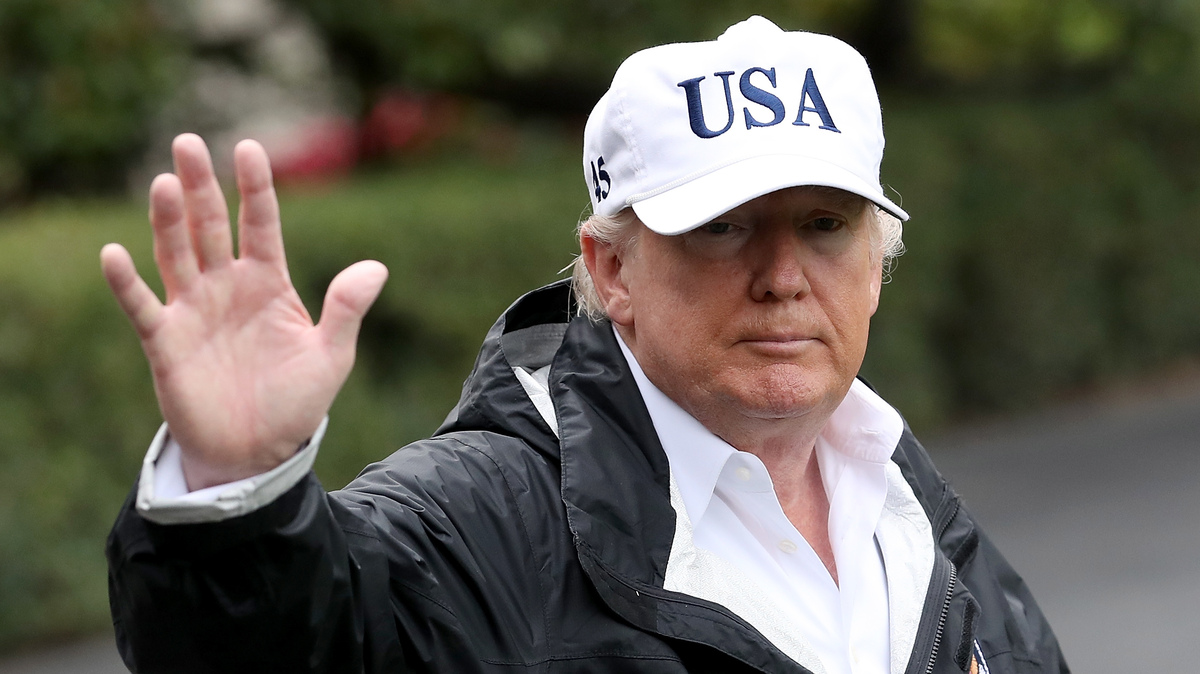 Amid his travels to hurricane-battered Florida, President Trump was repeatedly asked to explain what steps he hopes to take on the DACA program.

After learning that President Trump is working with Democratic congressional leaders on codifying the Deferred Action for Childhood Arrivals program, furious Trump supporters burned their Make America Great Again hats. Fox News' Sean Hannity tweeted that "@POTUS needs to stay the course and keep his promises or it's over." And in response to a Trump tweet about allowing DREAMers to stay in the country, conservative commentator Ann Coulter tweeted, "At this point, who DOESN'T want Trump impeached?"

All of this is to be expected — Trump was elected in part because of his strongly anti-immigration views. Indeed, a recent poll shows that Trump's base was happy that he rescinded DACA. Among people who "strongly approve" of Trump, 71 percent told Morning Consult that rescinding DACA was the "right thing to do." (The rest were evenly split between "wrong thing" and "don't know/no opinion.")

So the people who love Trump were happy he did this. But when Trump canceled the Obama-era policy, he did so with a cushion, giving Congress six months to figure out what to do next on the policy. And when it comes to what exactly his supporters want, things are more complicated.

Republicans — even Trump's base — are divided

Multiple polls suggest that after Trump announced he was rescinding DACA, Republicans were happy with the decision. However, polling also indicates that Republicans aren't certain what should happen to the program's beneficiaries now.

First, to zoom out: Republicans overall tend to be less hard-line when it comes to DACA recipients than they do on other immigrants in the U.S. illegally. Thirty-seven percent recently told Morning Consult that immigrants in the U.S. illegally should be deported. But fewer — 24 percent — said DREAMers should be deported. (DACA beneficiaries are often called DREAMers after a long-proposed-but-never-passed Development, Relief and Education for Alien Minors Act.)

And while multiple polls show Republicans opposed to DACA, there is more division on what should happen to DREAMers once the program expires. According to an early September poll from YouGov and HuffPost, 83 percent of Republicans thought Trump "made the right decision" on ending DACA. But as for whether Congress should pass a law to allow DREAMers to stay in the country, opinions were mixed: 42 percent said no, 31 percent said yes and 26 percent were unsure.

Likewise, there was that poll mentioned above, from Politico and Morning Consult, that found that 57 percent of Republicans thought ending DACA was the "right thing" — much higher than the nation as a whole.

But it doesn't appear that they're opposed to the concerns that originally animated DACA in the first place. Fully 46 percent of Republicans in that poll said they wanted Congress to pass a law that allows DREAMers to get citizenship. Another 24 percent said DREAMers should get legal status. Only 20 percent said they wanted legislation that removes or deports DREAMers.

This divided Republican attitude toward DREAMers isn't anything new, either. While 3 out of 4 Republicans said they would prefer a presidential candidate who would get rid of DACA, according to a May 2015 AP-GfK poll, just over half of said they would prefer or "could imagine" voting for someone who was OK with keeping the policy in place. And around 4 in 10 were in favor of allowing DREAMers to stay in the country.

It's a little tougher to take the temperature of Trump's staunchest supporters — many polls don't get down to that kind of granularity. But recent data from Morning Consult (which does dig into small subgroups of voters) suggests that while they oppose DACA more intensely than other Republicans, Trump's strongest supporters likewise are divided on what to do next.

It's true that Trump's die-hard supporters have always not only been more opposed to immigration than everyone else, but they also see it as more of a priority, as The Washington Post's Philip Bump wrote Thursday.

While 71 percent of strong Trump approvers told Morning Consult that rescinding DACA was "the right thing to do," only 27 percent of people who strongly approve of Trump said they wanted Congress to pass a law that "removes or deports DREAMers." In comparison, 38 percent said they wanted a law that created a path to citizenship and 23 percent wanted a path to legal status.

Is the policy's substance the problem or just the fact that it exists?

One caveat here — issue polling is notoriously difficult to parse. The numbers here are a little all over the map — in one poll mentioned above, 83 percent of Republicans said ending DACA was the "right thing to do." In another, 57 percent did. In still another, taken before Trump announced he was ending the program, 49 percent said so — a clear plurality, but not a majority.

Question wording, question order and the numbers of choices that respondents have to pick from can all create wide variation in issue poll results. (For example, some polls simply ask whether people oppose or support a policy — others ask whether people "strongly" or "somewhat" support or oppose a policy.) So there is always reason to not take issue polling numbers as gospel; rather, an array of polls can provide a sense of patterns.

And here, there seems to be a (very) broad pattern: Republicans — and Trump's base on its own — tend to oppose DACA far more than they support it, but they're divided on what to do about it. The existence of the policy seems to bother them more than the substance. 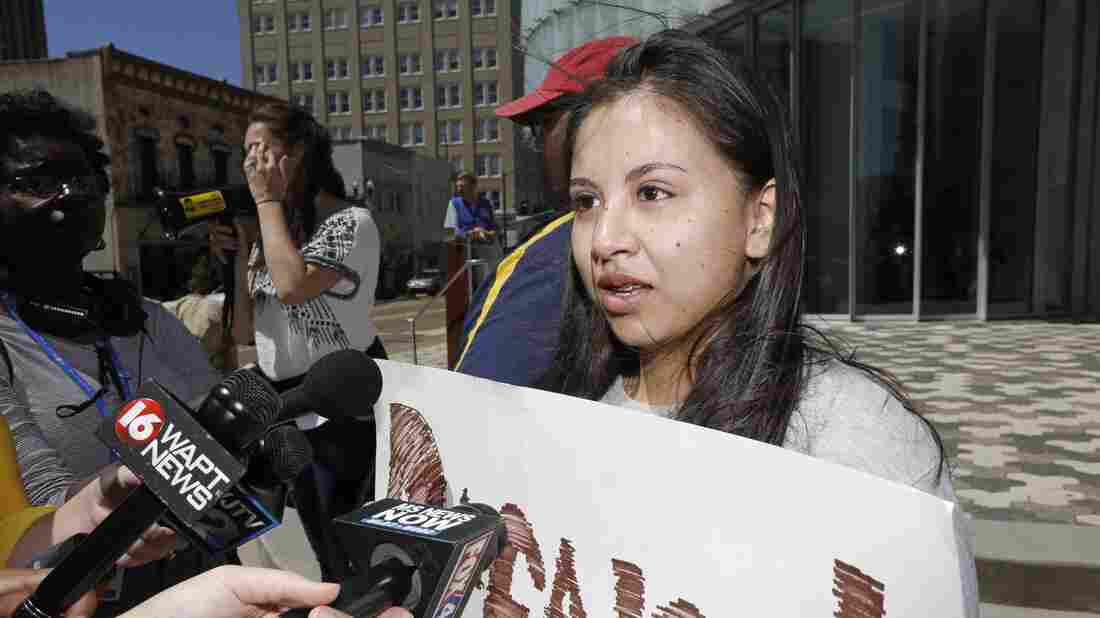 Brenda Ramirez, 18, speaks to reporters about the opportunities she receives via the DACA program during a protest earlier this month in downtown Jackson, Miss. Rogelio V. Solis/AP hide caption 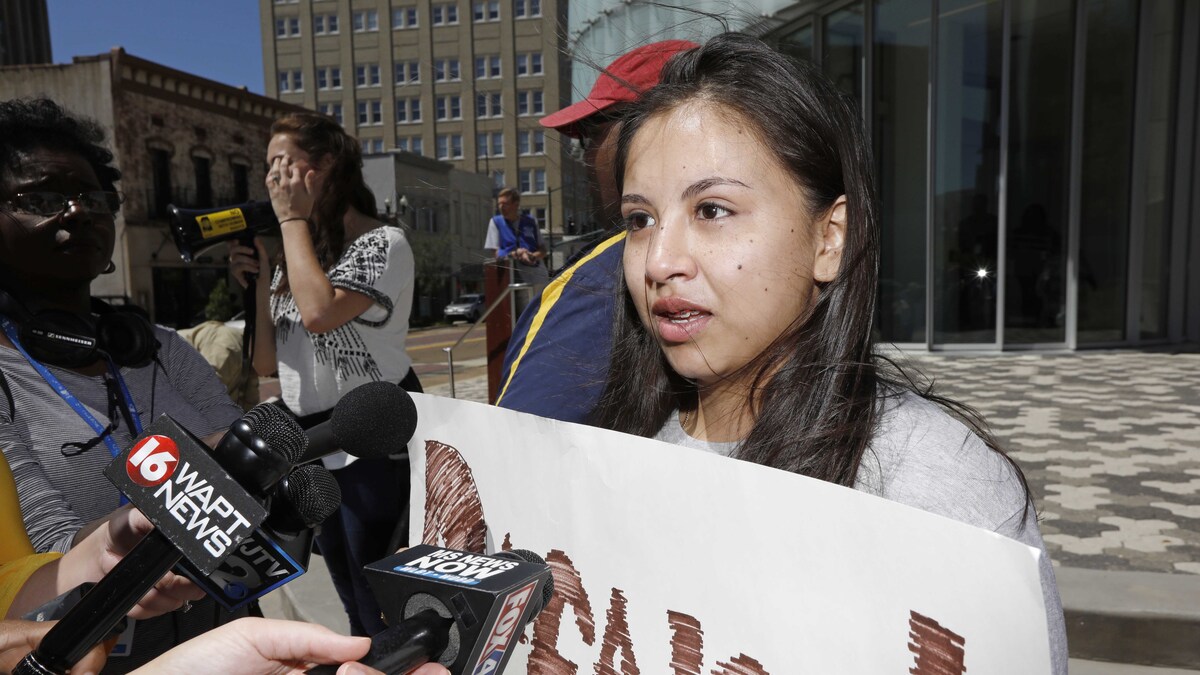 Brenda Ramirez, 18, speaks to reporters about the opportunities she receives via the DACA program during a protest earlier this month in downtown Jackson, Miss.

One explanation here may be how the policy came into existence: Many on the right saw the creation of DACA as executive overreach on President Barack Obama's part because he created it as an administrative program and not through Congress. Still others may simply be happy Trump is undoing an Obama-era policy.

There is evidence that Obama's name made his immigration actions less popular. One 2015 poll from the Public Religion Research Institute found that when Obama's name was attached to a program that allowed parents of legal residents to stay in the country, people supported it much less — particularly Republicans. Two-thirds of Republicans supported the related Deferred Action for Parents of Americans and Lawful Permanent Residents when a question about it didn't mention Obama, but only half supported it when Obama's name was included in the question.

Trump's base may well be angry that he seems to be softening on what to do about DACA. But up until now, they have stuck with him — fully 98 percent of Trump's primary voters from 2016 still approve of the job he is doing, according to a recent Wall Street Journal/NBC poll. Around 80 percent of Republicans approve of him as well, according to Gallup.

And Trump has supported policies that haven't been popular among Republicans. He rolled back the Obama administration's opening of relations with Cuba, while a poll indicated a majority of Republicans were opposed to the idea. Likewise, he celebrated the passage earlier this year of the House's health care overhaul bill, despite polls indicating that Republicans nationwide didn't like it.

Trump's supporters may well punish him if they perceive he is going too easy on DACA recipients. On the other hand, people who approve of Trump tend to care about his "approach/personality" far more than his policies, according to an August poll from the Pew Research Center. Whatever ends up happening with DACA then, some of his supporters may stick with him anyway, so long as he is upending political conventions in the process.