Accessibility links
Stream The Clientele's New Album, 'Music for the Age of Miracles' Stream the sweetly spooky return of the soft-hearted British psych-poppers. 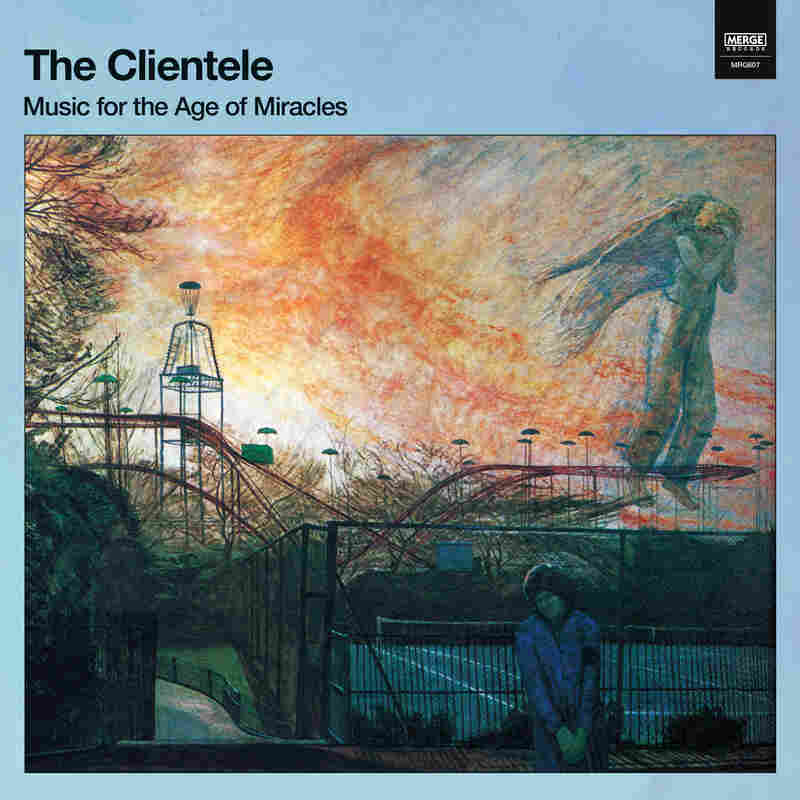 Pre-order The Clientele's Music For The Age Of Miracles here.

On their first full album in eight years, British psych-pop romantics The Clientele are more poetically spooky than ever. Their fragile, gently shimmering sound still bears the twin influences of wispy 1960s folk rock, a la Nick Drake, and the organic impressionism of British artists from the late 1800s/early 1900s, like painter John Atkinson Grimshaw and poet Edward Thomas. But just underneath the bucolic beauty lay darker dreams.

In 2011, frontman Alasdair MacLean put The Clientele on an indefinite hiatus, opting instead to explore a blend of folk rock and Brazilian influences alongside singer/songwriter Lupe Núñez-Fernández in the duo Amor de Dias, releasing two albums. But reconnecting with pre-Clientele collaborator Anthony Harmer sparked MacLean to reconvene bassist James Hornsey and drummer Mark Keen for what would become the sixth Clientele album, with Harmer producing, providing string and brass arrangements, and adding exotic colors including saz (a Turkish lute) and santur (a dulcimer-like Persian instrument).

With Harmer's assistance, MacLean and company crafted perhaps their most musically ambitious album to date. Music For The Age Of Miracles is full of elegant, occasionally even majestic orchestrations and unexpected melodic twists that slip by subtly enough to keep from disturbing the quiet grace that is a Clientele signature.

Thematically speaking, there's lots of space in these songs, with an abundance of vacant houses, empty rooms and deserted streets occupying the narratives. Rarely rising above a bewitching murmur, MacLean delivers accounts of metaphysical dislocation, seeming like a man unstuck from both his world and himself. But between his mellow delivery and the songs' melodic pleasures, it never sounds like too terrible a state to experience.

From the first song, "The Neighbour," things shift in and out of a dream space, making it tough to tell which level of consciousness is operative at any given moment, and that fluidity continues throughout the album. Harmer's santur adds a delicately sparkling touch as the album's preoccupation with mythology (one of a number of recurring themes) begins with MacLean crooning mysteriously about the return of "the old Gods."

The cello-laced "Lunar Days" introduces another abiding theme, that of celestial imagery. But there's a hazy, senses-blurring feel to the many moons and constellations that pop up across the album, in line with the slightly surreal tone of the aforementioned Grimshaw's night skies. It's never clear what these images portend; the darker edges of the dream emerge here, as these lunar days mark "the year that the monster will come." But even that observation is made with no apparent terror, just a laconic bemusement.

Harmer brings some electronic beats to the beginning of "Everything You See Tonight Is Different From Itself," but even this ostensibly anomalous element is quickly subsumed into a familiarly hypnotic feel, albeit a more insistently propelled one. "You're an empty face in an empty house," MacLean proclaims ... but is he referring to somebody else or to himself? Either way, the tune's surprising melodic detours mark it as one of the band's most musically sophisticated achievements thus far.

As with all The Clientele's output, Music In The Age Of Miracles is informed by the quintessential Englishness in the specificity of MacLean's language. What other current indie-pop outfit would casually toss off phrases like "tea at the refectory" and populate their songs with stanchions, holloways, and Buddleia and Whin plants?

A bittersweet nostalgia for the verdant vistas of his youth has always been a part of MacLean's outlook, and an almost corporeal encounter with that longing emerges on "The Museum of Fog" as a possible source for the dislocation expressed throughout these songs. As they've sometimes done in the past, The Clientele has included a spoken-word prose piece (plus music) here, and "The Museum of Fog" chronicles a surreal encounter with the middle-aged narrator's own 16-year-old self.

By the time we reach the gorgeously gliding title track at the album's end, we're presented with what feels like a summing up of the entire album's experience. MacLean sings, "Lately I've been living like I'm so far away / Like I'm somebody else in some other place / Now the year is turning and the eeriness comes to the boughs of the elms, to the places I love." From song to song, we've been wondering which parts are "real" and which are dreams, but maybe we've been asking the wrong question all along. Maybe it was all a dream. If so, it's one with no urgent need for awakening; it's the kind of dream you like to live in for a while.