Accessibility links
Wooooo! 'Second Nature' Is A Winningly Unadorned Memoir Of The Wrestling Life "Nature Boy" Ric Flair is one of the greatest pro wrestlers of all time. His daughter Charlotte followed him into the ring, and now, they've written a joint memoir that's moving and brutally honest.

Wooooo! 'Second Nature' Is A Winningly Unadorned Memoir Of The Wrestling Life

Wooooo! 'Second Nature' Is A Winningly Unadorned Memoir Of The Wrestling Life 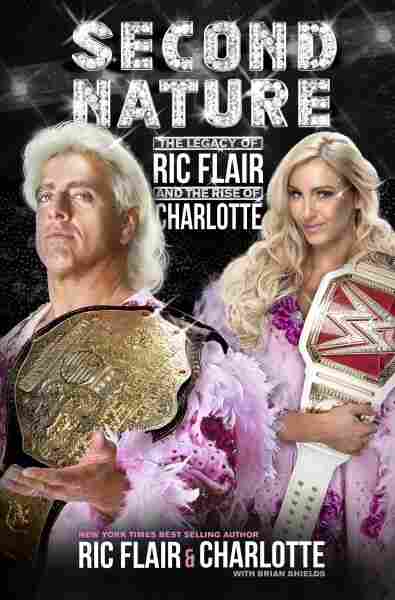 Last month, professional wrestling fans were shocked to hear that Ric Flair, the WWE legend who many consider the greatest professional wrestler of all time, was in a medically induced coma. The outlook wasn't great, the media reported, and stunned fans took to Twitter and Facebook to post memories of "the Nature Boy," who gleefully annihilated his opponents with his signature figure-four leglock and seemingly bottomless bag of dirty tricks. For fans of old-school wrestling like me, who grew up watching the likes of Flair, Bruiser Brody and Randy Savage, the news of his poor health hit like an overhead chop.

But death couldn't pin Flair. Not long after surgery to remove part of his colon, the wrestler posted a video on Twitter. Wearing a t-shirt that boasted "I'm Not Dead Yet," followed by a profanity, Flair proclaimed, "Nature Boy is back up and running. ... I want to tell all my fans out there thank you for all the love [and] support, and I will see you in the very, very, very, very, very, very near future." He ended with his trademark catchphrase: "Woooooo!"

A coma couldn't stop "Naitch," but not much can, and the same is true of his pro-wrestler daughter, Charlotte, who joined the WWE in 2013. Their toughness — and compassion — are fully on display in Second Nature, a joint memoir that's just as fun as fans of the Flairs would expect.

The first section of the book goes to Ric, who discusses his emotional first retirement in 2008, after his induction into the WWE Hall of Fame. The elder Flair had spent decades in his persona as a "limousine-ridin', jet-flyin', kiss-stealin', wheelin', dealin' son of a gun;" after his final match against Shawn Michaels, he experienced a panic attack: "Wrestling was my life. It was all I'd ever known. Now it was gone. My God, what had I done?"

'Second Nature' is like wrestling itself — raw, cathartic and a lot of fun.

Ric's section is brutally honest, and he regularly offers scathing assessments of himself that most people would shy away from. "I won't go down in history as the greatest father," he admits. "I was so consumed with being the 'Nature Boy' that nothing else mattered." Memoirs generally only work when the author isn't afraid to be brutally honest, and Ric has never had been afraid of telling it like it is.

In the second part of the book, Charlotte discusses her childhood; despite Ric's admission that he wasn't a great dad, his daughter's memories of growing up are mostly positive. Her young adulthood was marked by troubles, however — in one harrowing chapter she describes being emotionally abused by her then-partner. "I think about that girl now, and it brings tears to my eyes," she writes. "Why wasn't I strong enough, brave enough, to end this?"

The most moving part of Second Nature deals with the death of Reid Flair, Ric's son and Charlotte's brother, of a heroin overdose in 2013. The Flairs write about their loss with emotional nakedness; it's simple and raw and heartbreaking. "I'll never recover from not being able to save my son," Ric writes. Charlotte echoes her father's sentiment: "There will always be a piece of me that is missing. ... [My heart] will beat differently for the rest of my life."

The honesty with which the Flairs write about their lives is remarkable. Professional wrestling, perhaps more so than any other sport, doesn't tend to reward emotional vulnerability; the athletes are, after all, carefully constructed characters. But Ric and Charlotte prove unafraid to open up about their lives; their writing is unadorned and straightforward, which makes their accounts of their sometimes painful lives even more compelling.

Second Nature isn't likely to appeal to those who don't have at least some affection for the world of wrestling. But it doesn't need to. Fans of the sport will treasure the Flairs' anecdotes about meeting some of the stars of WWE, from "Rowdy" Roddy Piper to Paul "Triple H" Levesque (who contributes a foreword to the book), and will undoubtedly be charmed by the pair's candor. (Ric writes openly about his divorces and financial troubles, for example.)

The story of the Flairs is a very American one, and it illustrates why professional wrestling is so popular with so many people — life is endlessly complicated, but for a few hours once in a while, fans can forget whatever happened in the news that week and watch a good-versus-evil fight play out before their eyes. Second Nature is like wrestling itself — raw, cathartic and a lot of fun, and it's sure to please those who can't live without the WWE. Or as Naitch himself might put it: Wooooooo!