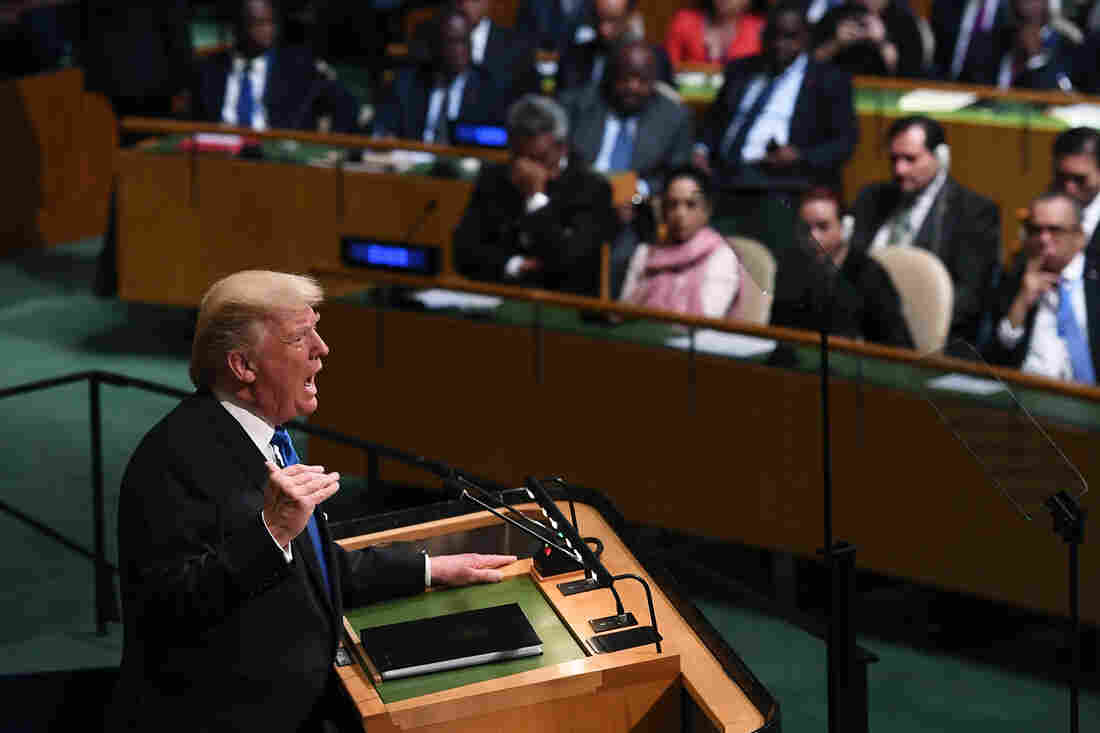 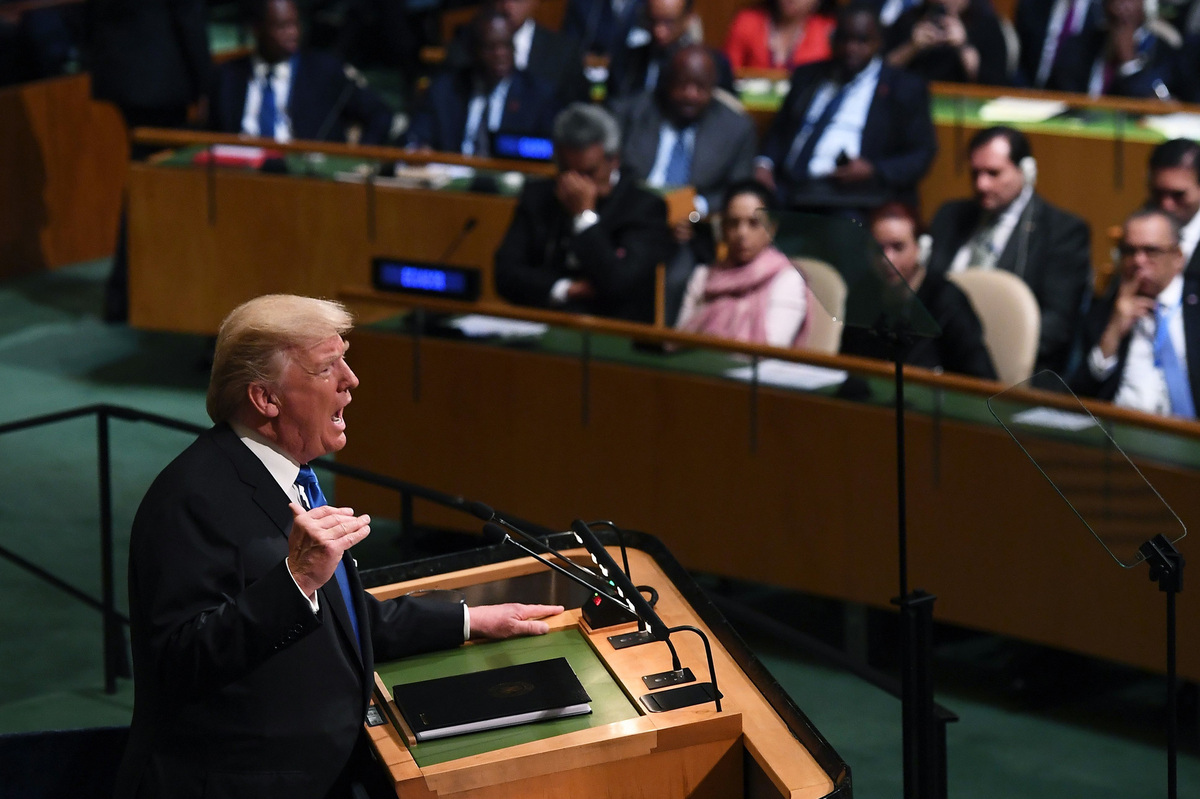 President Trump applauded the U.N. Security Council for its recent votes to impose tough economic sanctions on North Korea, during an address to the U.N. General Assembly on Tuesday.

"Rocket man is on a suicide mission for himself and for his regime," Trump said, using the nickname he coined for Kim Jong Un and used previously on Twitter.

The North Korean leader has defied international sanctions by developing nuclear weapons, along with ballistic missiles that could potentially deliver a warhead to Japan, Guam or even the continental United States.

"The United States has great strength and patience," Trump said. "But if it is forced to defend itself or its allies, we will have no choice but to totally destroy North Korea."

Even as he threatened a military response, Trump said he hoped that would not be necessary.

"That's what the United Nations is for," he said. "Let's see how they do."

In First U.N. Speech, Trump Will Call For Other Countries To Step Up

Trump applauded members of the U.N. Security Council — including China and Russia — for two unanimous votes in recent weeks to impose economic sanctions on North Korea. But the president stressed that the international community must do more to isolate the Kim regime.

Trump also criticized Iran for destabilizing actions in the Middle East and suggested he might still withdraw from the nuclear deal that the Obama administration struck with Iran and five other U.N. members.

"Frankly, that deal is an embarrassment to the United States, and I don't think you've heard the last of it, believe me," Trump said.

While the president has frequently criticized the nuclear deal, he has repeatedly passed up chances to back out of the agreement, including just last week.

Tuesday's speech was Trump's first opportunity to address the General Assembly. In the past, he has faulted the U.N. as a venue for too much talk and too little action.

Speaking to a packed assembly hall, including dozens of heads of state, Trump defended his doctrine of "America First," while insisting that it need not be an impediment to international cooperation.

"As president of the United States, I will always put America first, just like you as the leaders of your countries will always and should always put your countries first," Trump said, to polite applause. "But making a better life for our people also requires us to work together in close harmony and unity to create a more safe and peaceful future for all people."

In addition to "rogue regimes" such as North Korea and Iran, Trump took aim at terrorist groups like ISIS, arguing that stepped-up military pressure has yielded big results in the past eight months.

"We will stop radical Islamic terrorism because we cannot allow it to tear up our nation and indeed to tear up the entire world," he said.

Since taking office, Trump has frequently tested international cooperation. He has announced plans to withdraw from the U.N.-sponsored Paris climate agreement, for example. He also backed out of a trade deal with 11 other countries along the Pacific Rim.

"The United States will forever be a great friend to the world and especially to its allies," Trump said. "But we can no longer be taken advantage of or enter into a one-sided deal where the United States gets nothing in return."

Trump complained that the U.S. pays 22 percent of the United Nations' operating costs and 28 percent of its peacekeeping costs.

"The United States bears an unfair cost burden," he said. "Nations of the world must take a greater role in promoting secure and prosperous societies in their own regions."

Trump also offered an economic justification for his decision to sharply reduce the number of refugees the United States takes in.

"For the cost of resettling one refugee in the United States, we can assist more than 10 in their home region," Trump said. "This is the safe, responsible and humanitarian approach."

Trump insisted that the United States does not seek to impose its values or its system of government on other countries. But he was harshly critical of socialism, especially as practiced in Cuba and Venezuela.

The Trump administration has imposed economic sanctions on Venezuela in response to what U.S. officials describe as that country's slide toward dictatorship.

The U.N. assembly hall was packed with diplomats and world leaders eager to take the measure of the new American president. Trump drew polite applause both before and after he spoke.

Israeli Prime Minister Benjamin Netanyahu cheered the president's remarks on Iran. "In over 30 years in my experience with the UN," Netanyahu said on Twitter afterward, "I never heard a bolder or more courageous speech." Trump "spoke the truth about the great dangers facing our world and issued a powerful call to confront them in order to ensure the future of humanity," Netanyahu also tweeted.

But Trump also had his critics, including Sen. Dianne Feinstein, D-Calif., who called the president's remarks Tuesday — about North Korea and about other global threats and challenges — "severe disappointments."

The influential Democrat, who sits on the Senate Intelligence and Judiciary committees, said in a statement that Trump had used the global stage of the U.N. General Assembly "to threaten war."

"He missed an opportunity to present any positive actions the U.N. could take with respect to North Korea, and he launched a diatribe against Iran, again offering no pathway forward," Feinstein said.

"He aims to unify the world through tactics of intimidation, but in reality, he only further isolates the United States," she also said.