Accessibility links
In A Future Ruled By Big Pharma, A Robot Tentatively Explores Freedom — And Sex: 'Autonomous' Annalee Newitz's tale of a pharmaceutical pirate and the dangerous agents hunting her is built on tender, intimate characterizations that probe notions of selfhood, gender and ownership. 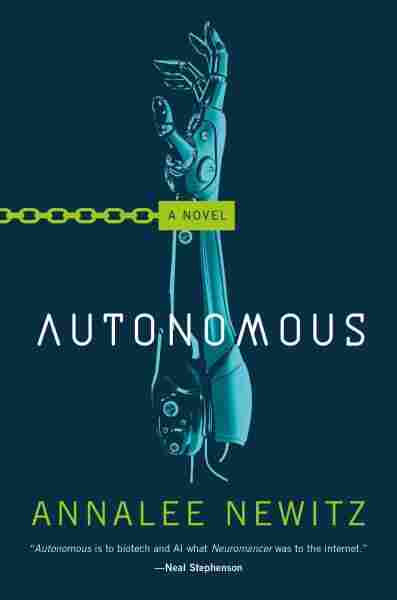 To open a book with an Arrogant Worms song and improve from there is no small feat.

In Annalee Newitz's Autonomous, the future is pharmaceutical, and everything from patents to people can be owned in perpetuity. Following humanity's devastation by, and recovery from, waves of plagues at the end of the twenty-first century, the world's national borders have been redrawn into economic zones through which agents of the International Property Coalition move freely, violently enforcing large pharmaceutical companies' patents and executing pirates as terrorists, without trial.

Jack Chen is a pirate who's dedicated her life to the development and distribution of free drugs, reverse-engineering patented pharma cheaply and quickly and distributing it where it's needed. But when she drops a productivity-boosting drug called Zacuity on the black market and it starts unexpectedly killing people, she has to do two things very quickly: develop a drug therapy to fix her mistake, and make public Big Pharma's illegal development of a drug that deliberately makes work as addictive as heroin.

Unfortunately for Jack, two IPC agents are hot on her trail. Paladin is a brand-new military grade robot, partnered with a human man named Eliasz to track Jack down before anything can officially embarrass Zacuity's patent-holders. Paladin's job is to protect Eliasz while he gathers information – but the robot finds Eliasz himself more fascinating than their mission parameters, devoting time and processing power to understanding him and the nuances of their developing relationship.

How To Survive A Mass Extinction

How To Survive A Mass Extinction

I rarely dog-ear the books I read for review, trusting myself to remember their most notable aspects. I dog-eared enough of Autonomous' pages to almost double its thickness, such was the granularity of things I wanted to highlight, praise, and discuss. From startling insights to delicately turned prose to whole passages of unbearably tender musings on the intimate desires of artificial intelligence, there's much more than I can feasibly talk about here. But here's some highlights.

Autonomous' main interest is the danger our late capitalist modernity poses to personhood, and the intricacies of what it means to be free – from ownership, from programming, from the circumstances of one's birth. But the parts that enthralled and moved me most – to laughter, to tears – were the musings on sexuality, and the contrast between Jack and Paladin's respective experiences. Throughout most of the novel, Jack's relationship to sexuality is written in clinical, chemical terms, a physical means to a physical end; Paladin's, meanwhile, is explored in intimate, puzzled probings, often starkly contrasted with the extreme violence for which Paladin was built. I loved the contrast between seeing a woman treat sex as casually as an itch to scratch, and a genderless robot building romance and sexuality from first principles, through internet searches, conversations with other AIs, and awkward, fumbling experiments.

I was also delighted by how much of a love letter to Canada this book is, how many nods and winks to Canadianness it contains. From breathtaking descriptions of Saskatchewan to body horror at Tim Horton's, I felt in on cultural references and jokes to a degree I've rarely experienced in genre fiction.

Autonomous brims and bubbles over with ideas, tenderness and care; my experience of reading it was of wanting to discuss every paragraph I consumed.

That said, I found the representation of indigenous people in Jack's history a missed opportunity. In a novel so concerned with both the Canadian landscape and the stakes and ideologies of property, it would have made sharp thematic sense to acknowledge and represent indigenous peoples' centuries-old – and, for us, intensely contemporary – anti-capitalist resistance. Instead, the only mention the novel makes to indigeneity is Jack remembering high school friends who vanished into "cultural enrichment" contracts in the North, in a disturbing flip of residential school scripts that I wish had been further expanded on.

This is part of Autonomous' larger world-building problem: While everything about AI, biochem, and character is riveting, a lot of the intellectual property aspects of the world don't quite stand up to scrutiny. I found myself treating confusing uses of terms like "prior art" as Star Trek technobabble not intended to do more than sound convincing, and largely making the deliberate decision not to ask too many questions of the world in order to focus on the tremendously compelling character arcs. As fascinating as it was to see the American problem of inaccessibly expensive health care cast over a Canadian landscape, it also raised world-building questions that weren't answered until quite late in the story – in ways that only raised new questions. I was keenly aware, throughout, that the less I knew about IP and the pharmaceutical industry, the more I would enjoy this book.

Of course, I enjoyed it tremendously. Autonomous brims and bubbles over with ideas, tenderness and care; my experience of reading it was of wanting to discuss every paragraph I consumed. It's a brilliant, fascinating debut, beautifully written and developed, and I'm excited to see what conversations it provokes.