Accessibility links
Film Chronicles The Road To The 2-Hour Marathon: It's 'Just 25 Seconds Away' The documentary Breaking2 follows three elite runners as they attempt to break one of the most famous barriers in sports — maintaining 26.2 four-minute, 34-second miles. 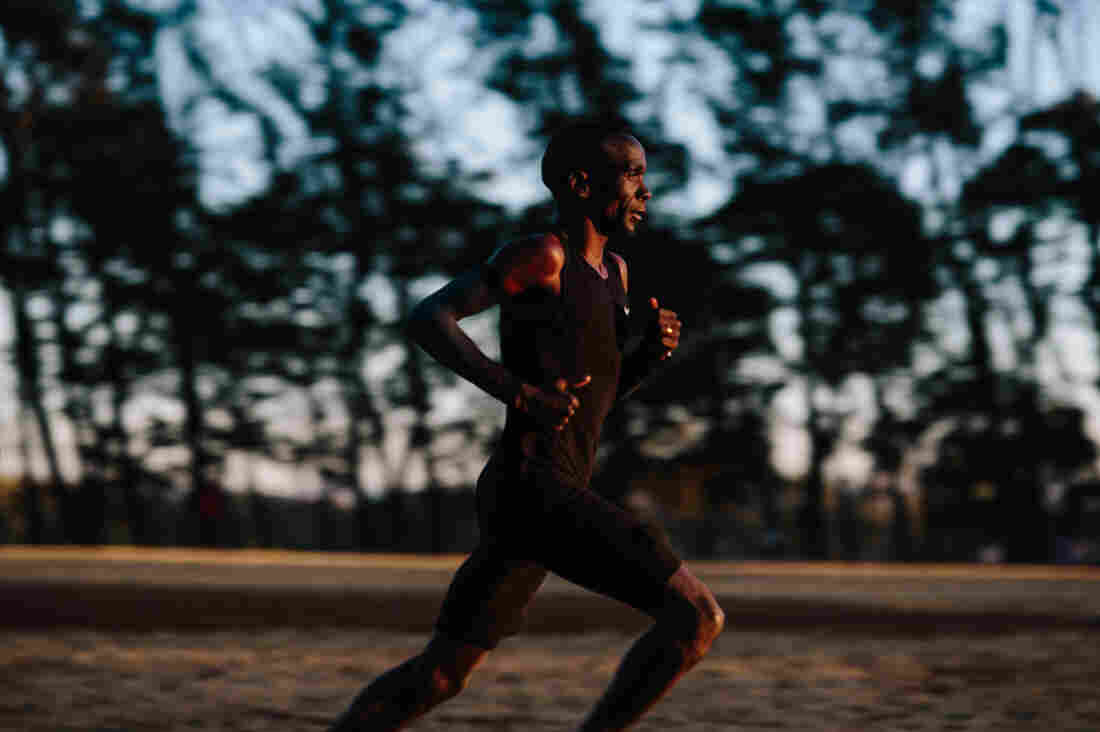 Can a human run a marathon in two hours flat? The documentary Breaking2 follows three elite runners as they attempt to break one of the most famous barriers in sport — maintaining 26.2 four-minute, 34-second miles.

One of those runners, Olympic gold medalist Eliud Kipchoge, of Kenya, came 25 seconds shy of the two-hour mark with a time of 2:00:25. "The world now is just 25 seconds away," Kipchoge says in the film.

"I'm not afraid to say when he crossed the line I cried," filmmaker Martin Desmond Roe tells NPR.

Breaking2 was a Nike project (you can watch the race here) in which trainers and scientists collaborated to give the runners every possible advantage, from tests in wind tunnels to specialized shoes. The film was co-produced by Nike and National Geographic.

On the three runners featured in the film

The project brought on board three of the greatest distance runners in the world right now. Eliud Kipchoge ... was generally considered to be the greatest distance runner currently running and possibly of all time. He's the Olympic gold medalist. At the time that we did the event he had second fastest marathon time of all time so he was a shoo-in. ...

The other two, we have Zersenay Tadese, from Eritrea — he's a very untrained talent but he has some of the greatest physical stats that the science team had ever recorded. ...

And the third is Lelisa Desisa, from Ethiopia. He actually was 22 years old when he won the Dubai marathon and then he went on to win two Boston marathons as well, so he's sort of a rising star within the marathon world. 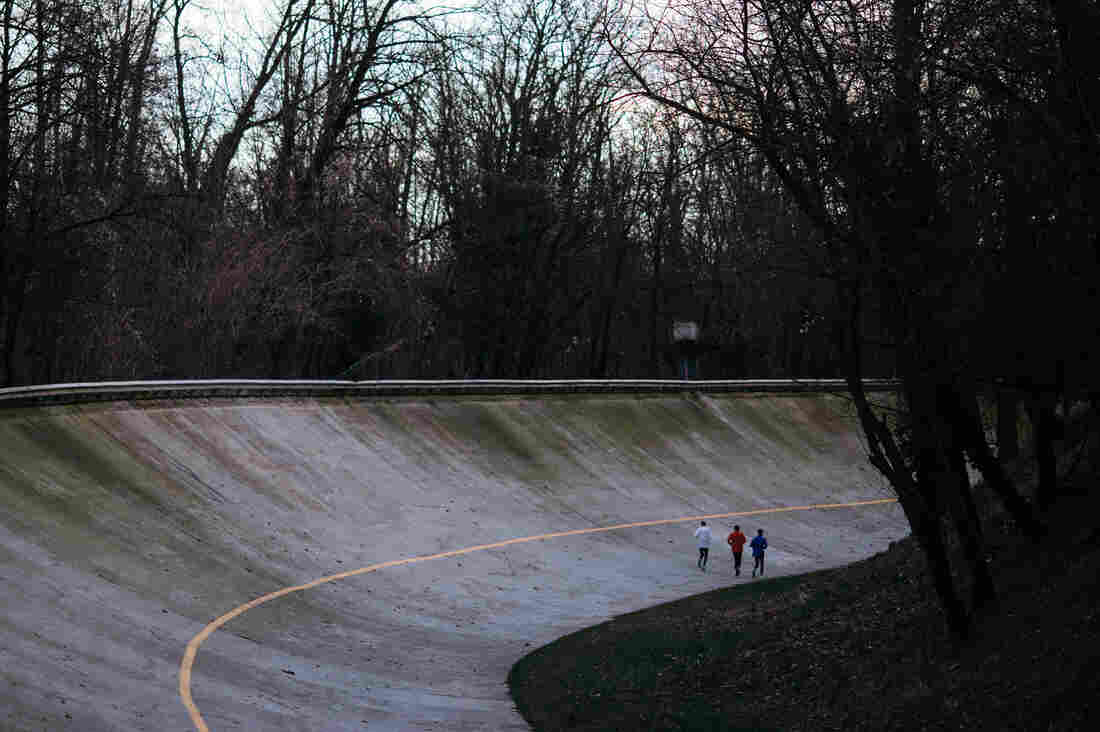 The attempt to break the two-hour marathon was staged on a Formula One racetrack in Monza, Italy. Mark McCambridge/Nike/Harmonica.co hide caption

On running the race on a Formula One race track in Monza, Italy

It's been known for quite a while that [a two-hour time] wasn't going to happen for a very long time under race conditions. Firstly, like, they just wanted to find somewhere that wasn't hilly. The less consistent the pace that they're able to maintain, the less likely they are to be able to maximize their time. ... By staging it ... on the Formula One track, not only was it perfectly flat, they ran in perfect circles so minimizing turns.

On how much "control" the scientists and trainers have

So much of it boiled down to grit at the end of the day, I mean, I think that whilst there was a lot of engagement from the scientists in the training program ... they advised on it, and they engaged with them — but these guys were already the best of the best. 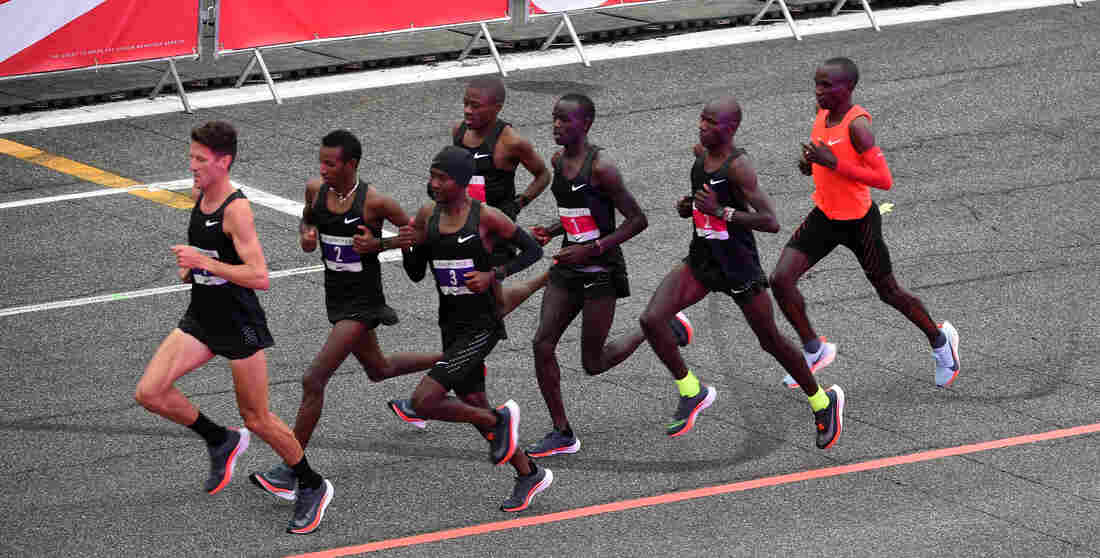 A team of elite runners acted as pacers and decreased wind resistance for Eliud Kipchoge (right) as he attempted a sub-two-hour marathon in Monza, Italy, on May 6. Pier Marco Tacca/Getty Images hide caption 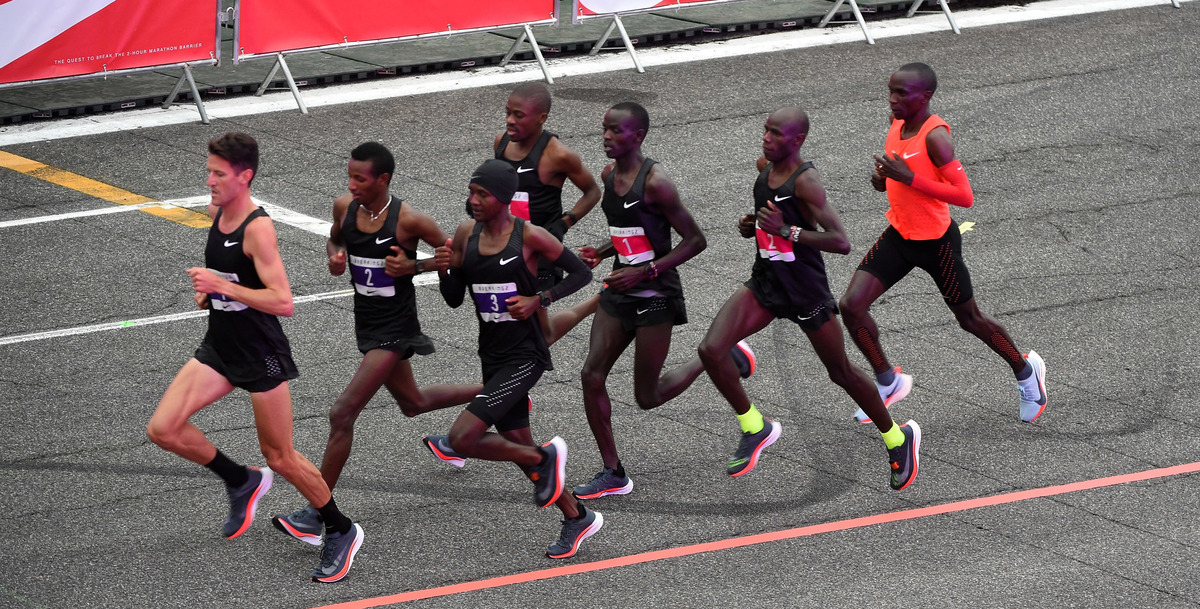 A team of elite runners acted as pacers and decreased wind resistance for Eliud Kipchoge (right) as he attempted a sub-two-hour marathon in Monza, Italy, on May 6.

On the drafting strategy, in which other elite runners ran as "pacers" in front of Eliud Kipchoge to cut down on wind resistance

[They were] running in a very regimented, six-man, arrow-like formation, which is breaking the wind. If you imagine drafting cars, or drafting, like, a bicycle team ... that was the most significant thing that they were honestly able to bring to Eliud. And it's the most controversial thing because ultimately it was the key thing that stopped it from being an official world record.

On Kipchoge missing the two-hour mark by just 25 seconds, less than one second per mile

We spent so much time watching him and feeling that self-belief that we'd all bought in. Even those last two laps as he starts to drift off — there was still, like, some hope and some belief that he was going to be able to slam it in that last mile.

In Fast-Paced China, Marathon Craze Is Off And Running (Despite A Clumsy Start)

On whether Kipchoge, 32, will try to beat the world record or the two-hour mark again

It's certainly not outside the realm of possibility. He's running the Berlin Marathon on Sunday. If he sets the world record this Sunday, then I don't know, maybe there will be another attempt [at the two hour mark] next year — we'll have to see.

Kevin Tidmarsh and Jacob Conrad produced and edited the audio of this interview. Holly Herzfeld and Beth Novey adapted it for the Web.