Accessibility links
2016 Voter Turnout Dropped At HBCUs, Climbed At Women's Colleges, Study Finds Voter turnout was up among college students by more than the nation as a whole in the last election, a Tufts University report says. But that turnout varied greatly across different types of colleges. 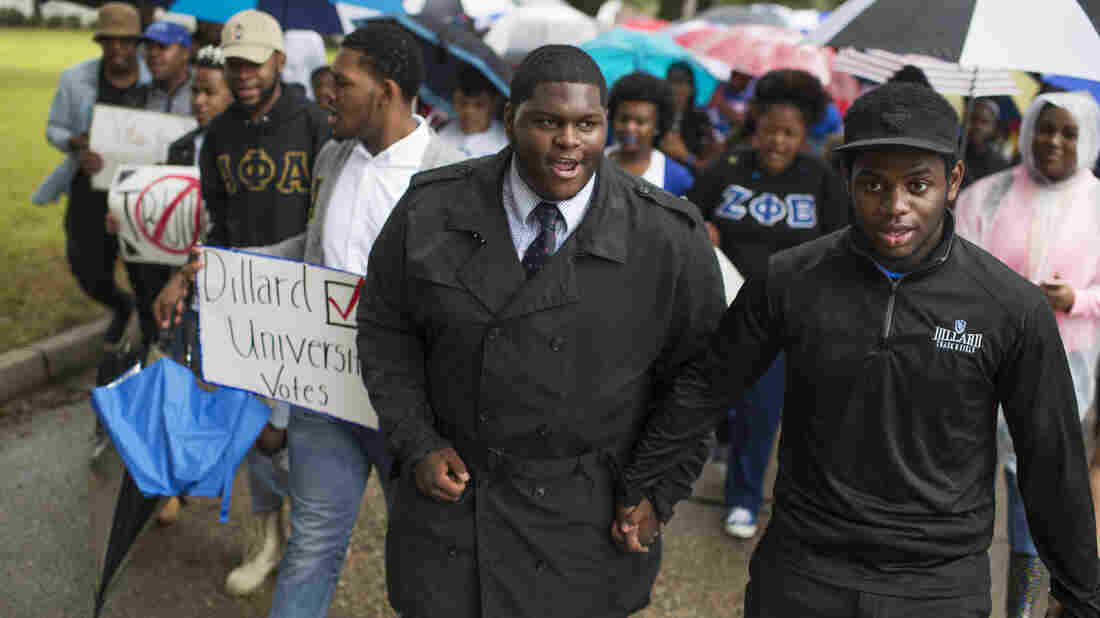 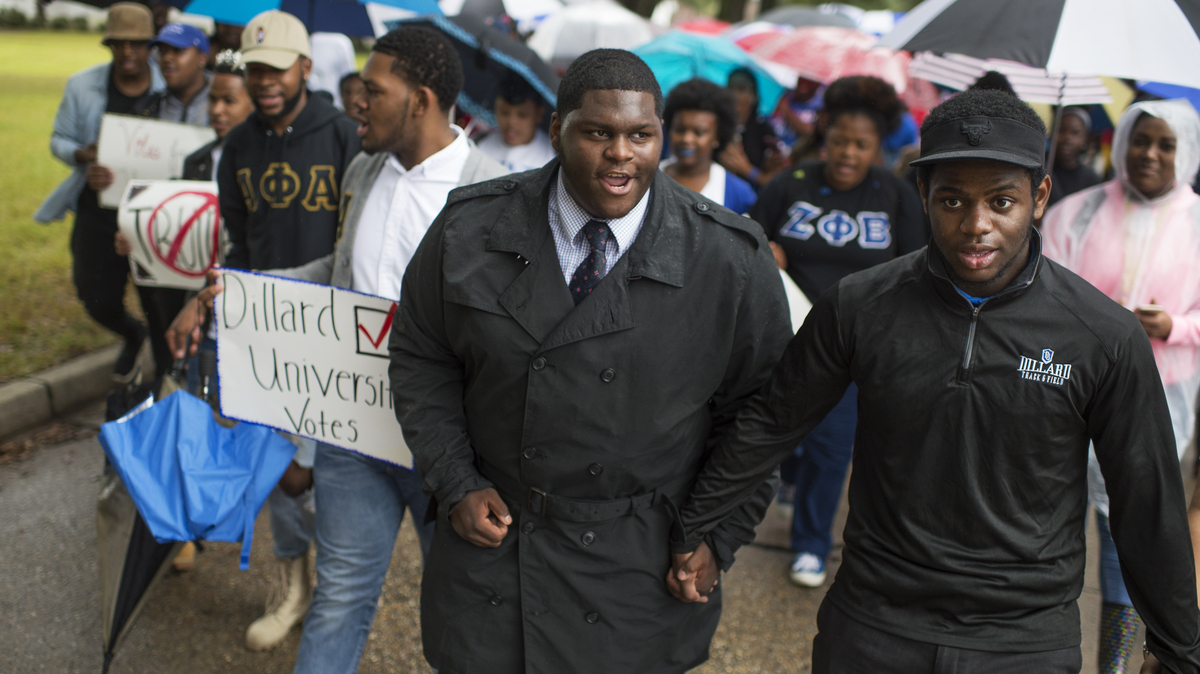 Dillard University students march to their polling place on campus to vote in New Orleans on Nov. 8, 2016.

Voter turnout among college students nationwide was up by 3 percentage points in the 2016 election, according to a new report — faster than turnout growth among all voters. But depending on the type of school, that turnout grew either far faster or in some cases plummeted.

The report, from Tufts University, looks at voting records for nearly 10 million American college students from both 2012 and 2016. Based on that data, college student turnout grew by 3.2 percentage points, from 45.1 to 48.3 percent. That's faster than the 1.1-point turnout bump seen among all voting-age adults.

But not all demographics were equally inspired to go to the polls. Turnout was up among white, Hispanic and Asian students, but down among black students.

"Some of the groups that went up are what we call low-propensity voters," Thomas said. "The fact that Asian students, Latino and Hispanic students went up to the extent that they did is pretty exciting."

And the numbers varied widely by different types of schools — turnout plummeted by more than 10 points at historically black colleges and universities, from 50.5 to 39.9 percent. At women's colleges, it grew by 7.3 percentage points, more than twice the national rate.

The study — the National Study of Learning, Voting, and Engagement at Tufts University — looks at a massive population. The 9.8 million students studied represent around half of all degree-seeking students, and their demographics resemble those of all college students nationwide.

The report introduces a few more data points into the ongoing deconstruction of how voters behaved in the chaotic 2016 election, but it also raises questions about how different campuses' political climates are created.

Race and gender may have caused some of the wide variations at particular types of school, said Nancy Thomas, director of the Institute for Democracy and Higher Education at Tufts.

It was "exciting for a lot of women" that a woman was at the top of a major party presidential ticket, Thomas said, so that may have driven women's voting upward. In addition, the fact that Hillary Clinton herself attended a women's college — and maybe even that that college was Wellesley, which was included in this survey — could have potentially drawn more women at those colleges to her. (The researchers declined to break down the data by school.)

Likewise, it's possible that a reverse version of that effect happened among black students.

But something else may have intensified those effects at women's-only institutions or HBCUs — the increase in turnout at women's colleges (7.3 points) was higher than it was for women as a whole (4.7 points), and the drop in turnout was larger at HBCUs (10.6 points) than the drop among African-Americans as a whole (5.3 points).

The researchers said they are curious about these effects, and want to explore further how the political culture at colleges that serve specific populations may be different from that at other schools.

America's youngest voters tend to have lower voting rates than older Americans, and the voting rate here was indeed smaller than the nation as a whole. Around 48 percent of voting-age college students voted in 2016, compared to around 54 percent of all voting-age Americans.

The students studied are overwhelmingly young — nearly two-thirds are under 25 — and 85 percent are undergraduates. But not all American college students are young co-eds living in dorms; around 17 percent of the college student voters in this study were 30 and older.