Accessibility links
Border Patrol Arrests Near Safe Zones Worry Immigrant Advocates The Sanchezes, who are undocumented immigrants, were apprehended while taking their son to emergency surgery. Immigrant advocates fear this is the new normal under the Trump administration. 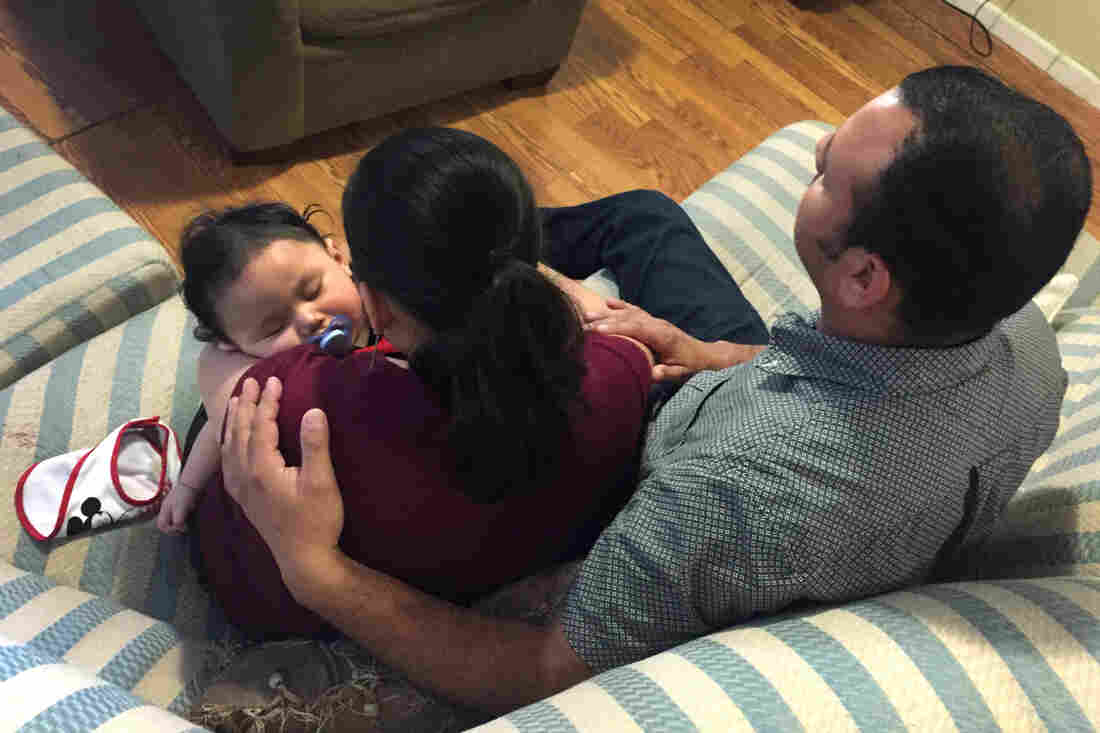 Irma and Oscar Sanchez were apprehended by the Border Patrol when they took their infant son, Isaac, to a children's hospital to have emergency surgery. John Burnett/NPR hide caption 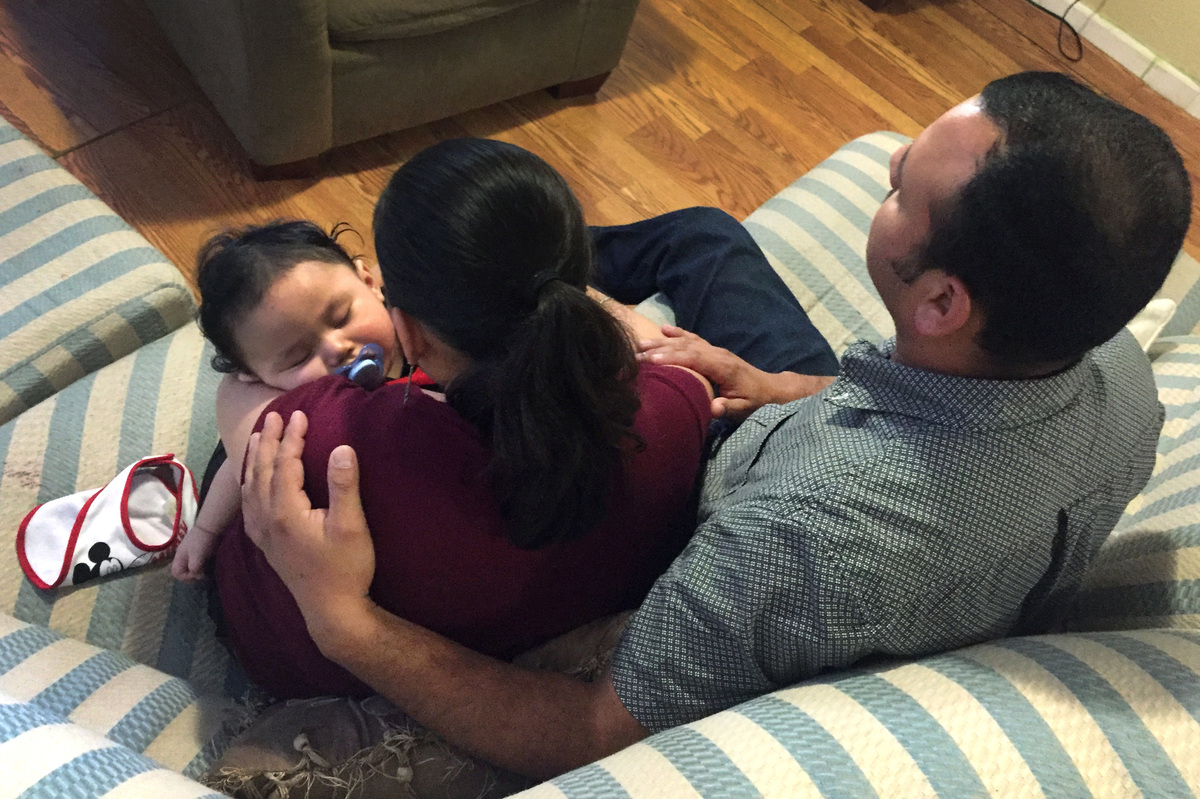 Irma and Oscar Sanchez were apprehended by the Border Patrol when they took their infant son, Isaac, to a children's hospital to have emergency surgery.

When 2-month-old Isaac Enrique Sanchez was diagnosed with pyloric stenosis, a condition that causes vomiting, dehydration and weight loss in infants, his parents were told that their son's condition was curable. The problem was that no hospital in the Rio Grande Valley of Texas had a pediatric surgery team capable of performing the operation on his stomach.

To make Isaac well, Oscar and Irma Sanchez would need to take their infant son to Driscoll Children's Hospital, in Corpus Christi, Texas. It was just a couple of hours up the highway, but for them it was a world away.

The Sanchezes, who are undocumented, would need to pass a Border Patrol checkpoint.

"The nurse told us we had to go there," Oscar says in Spanish. "We said we couldn't go."

While they pondered their predicament in a Harlingen, Texas, hospital, a Border Patrol agent showed up in the waiting room — Oscar Sanchez suspects a nurse turned them in — and said he could arrange for officers to escort the parents through the checkpoint to Corpus. But the agent said when they arrived, they would be arrested and put into deportation proceedings. The couple agreed.

The events that followed at the Corpus Christi hospital are the latest developments in a national controversy over so-called sensitive locations. Under President Barack Obama, the Department of Homeland Security adopted a policy that immigration agents should avoid enforcement actions at hospitals, schools, churches and public demonstrations unless there are special circumstances.

The Sanchezes' 48-hour odyssey with federal agents shows the lengths to which the Trump administration will go to round up people in the country illegally, whether they have a criminal record or not.

The Border Patrol followed the ambulance, the night of May 24, as it raced to Corpus through desolate ranchland, carrying Oscar, Irma and tiny Isaac — with an IV in his arm and a tube in his stomach. Once they arrived at Driscoll Children's Hospital, the green-uniformed agents never left the undocumented couple's side. Officers followed the father to the bathroom and the cafeteria and asked the mother to leave the door open when she breast-fed Isaac.

"Everywhere we went in the hospital," Oscar says, "they followed us."

Customs and Border Protection says it is required to monitor subjects in custody "at all times" and tried to do so at the hospital "in the least restrictive manner possible."

The next morning, agents took Oscar and Irma Sanchez, separately, from the hospital to the Corpus Christi Border Patrol station to be fingerprinted and booked. They were permitted to return. Oscar says he asked the surgeon if she could delay the operation until both parents could be in the waiting room. She agreed.

The parents said because Isaac is a U.S. citizen, the operation was covered by Medicaid.

"You feel vulnerable," Oscar says. "We didn't know if they were going to let us stay with our son or not."

The Border Patrol, in an initial email to NPR, says it made sure to leave one parent with the baby at all times. When asked about the operation being postponed by their arrest, the Border Patrol said its agents played no role in the decision.

"That was a decision the doctor and medical staff made," the agency said in the statement.

After NPR posted this story online, Manny Padilla, chief of the Rio Grande Valley sector of the Border Patrol, emailed an additional statement. "We're happy to have been able to help a human life," he said, "We have a job to do, but we do that job as humanely as possible."

"CBP was notified by the Harlingen hospital that there was a child with undocumented parents in need of urgent medical care and that the family would have to go through a checkpoint to the Corpus Christi hospital," he continued. "To get the child to the care it urgently needed, Border Patrol agents did everything in their power to assist the family, including escorting the ambulance, unimpeded, through the checkpoint."

On a recent Tuesday 3 1/2 months after the operation, Isaac sat on his mama's lap — all pudgy cheeks and wide eyes, wearing a top covered with little race cars. The family lives in a tidy, weathered frame house in North Brownsville, Texas.

"Thank the Lord, everything went well," Irma says. "He still throws up a little milk, but thank God he's fine."

Advocates are puzzled why the Border Patrol chose to put the Sanchezes under such intense supervision, which one would expect for higher-value targets like drug traffickers or MS-13 gang members. The couple has no criminal records. They overstayed visitors visas that were issued 12 years ago. He works construction and landscaping; she stays home with their four children, all of whom are citizens.

"I can't pretend to understand any reasoning that would have led anyone up the chain of command to think that Irma and Oscar were flight risks or dangers to the community or in any other way people who needed to be followed into a hospital in order to be placed in deportation proceedings," says Lisa Koop, a lawyer with the National Immigrant Justice Center. She will be asking an immigration judge in December to let the Sanchezes remain with their children in the U.S.

"That's how you treat criminals that are harmful, and that's understandable for our own protection," says Ana Hinojosa, an immigrant advocate with the Mennonite Central Committee in Brownsville, who is also working on the case. "But they're a family that's just here trying to make a living, provide an education and a future for their children."

Advocates are concerned that immigration enforcers are chipping away at places formerly considered safe zones. Three examples: Immigration agents detained six men after they left a church homeless shelter in Virginia; they removed a woman with a brain tumor from a Texas hospital and put her back in detention; and they arrested a father after he dropped off his daughter at school in Los Angeles.

As with the Corpus hospital, the agency maintains none of the arrests were actually made inside a sensitive location. But several members of Congress, all Democrats, are troubled just the same. They have proposed the "Protecting Sensitive Locations Act," which would codify protected places in federal law. And it would expand them to include courthouses and bus stops.

"They're pushing the envelope to the point where they're trying to find out how far they can go," says Bronx Rep. Jose Serrano, one of the bill's authors. He is outraged by what happened to the Sanchez family in South Texas. "It violates human decency," he says. "You don't interrupt medical procedures."

This story was updated on Sept. 21 with a response from Customs and Border Protection.