Accessibility links
Same-Sex Spouses Turn To Adoption To Protect Parental Rights If a man and a woman are married and a child is born, the man is automatically a parent. But if a woman who gives birth is married to another woman, parental rights are not guaranteed for her spouse. 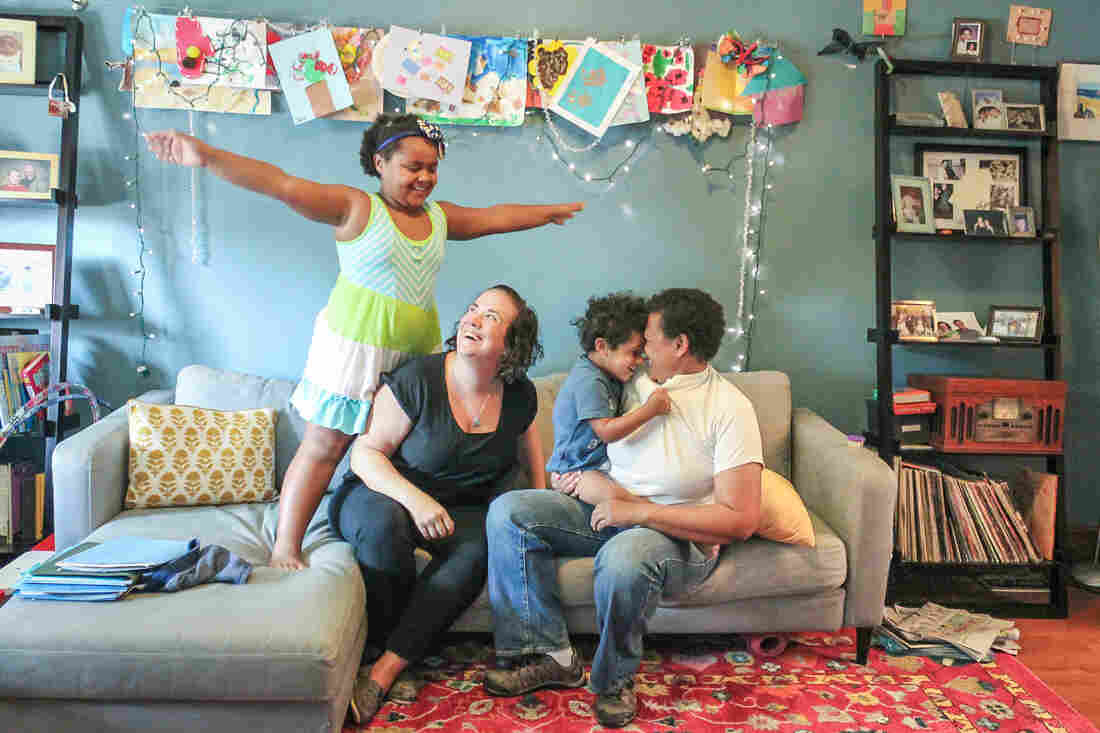 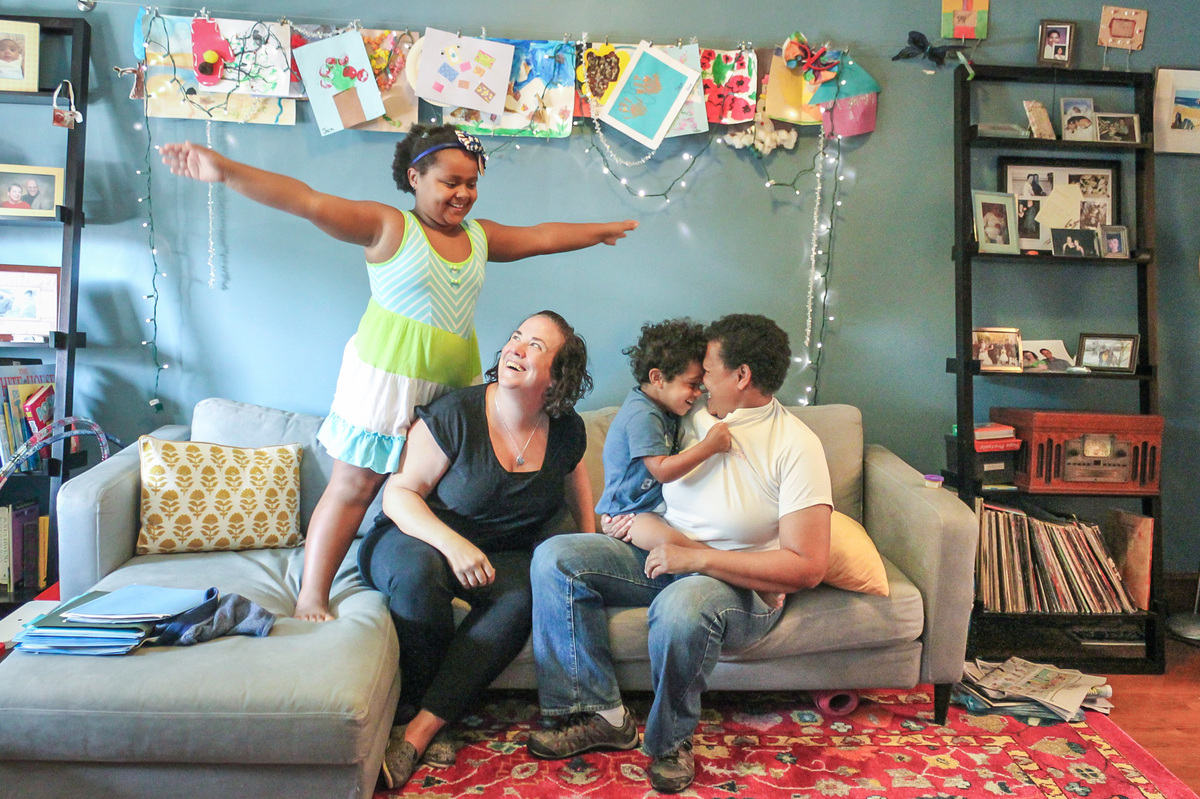 (L-R) Janey, Martha, Jack and Meredith Holley-Miers at their home in Washington D.C. Janey is demonstrating her "Superman arms."

Meredith and Martha Holley-Miers live in a brick row house in Washington, D.C. with their two kids and a big rainbow flag in front. The couple has been legally married for seven years — and together for 14 years.

When they decided to have a baby, they "went through a lot of time and a lot of money and a lot of heartache trying to get pregnant," Martha says. They used an anonymous sperm donor, and it took them many months. When Martha gave birth to daughter Janey — now a bubbly 8-year-old — in 2009, they knew that they'd need to put forth yet more time, money, and heartache.

"We knew that unlike straight couples having a baby there is no automatic legal connection between Meredith and the baby that that we had together," Martha says.

Behind that difference is something called the "marital presumption." When a married man and a woman have a child, they're automatically considered the parents of that child in the eyes of the law.

But many same-sex married couples worry that's not true for them. When a woman gives birth to a child, for example, her female spouse may not have the same legal rights as a parent — even if she's on the birth certificate. In 2015, the Supreme Court ruled that same-sex couples had the right to marry but courts haven't resolved what parental rights flow out of those marriages.

Same-Sex Marriage Support At All-Time High, Even Among Groups That Opposed It

So to make sure sure the spouse's parental rights are protected by the law — same-sex couples are going through a months-long, invasive legal process known as second-parent adoption. NPR asked to hear about families' experiences with this process — we heard from dozens of people from Oregon to Oklahoma. Some called it "humiliating," "absurd," "frustrating;" for others it was a mere inconvenience.

For the Holley-Miers family, the whole adoption process took months and cost about $3,500. A judge granted Meredith the adoption of her daughter Janey in July 2009.

That process involved a physical, blood work, TB test, and fingerprinting, says Meredith. There were additional state and FBI background checks, too. But the most stressful aspect of the process, the couple says, was a home visit by a social worker.

"Anybody who adopts has to do a home study," Meredith says. "It just bothered me that we had to do the whole process in general."

"It was hard to not compare our experience to the experience of straight couples who — while I know a lot of straight couples have a hard time having kids — there are a lot of people who get pregnant without even planning it, and nobody really questions whether or not they are fit parents," Martha says. "It just felt really unfair."

But they felt the second parent adoption was something they had to do.

Martha worried that if she died, "Meredith would be left taking care of a baby that she had no legal bond to. And so if my family decided that they didn't like that, they could take Meredith to court and they would have a stronger legal relationship to our baby than Meredith would if we didn't do the second-parent adoption," she said. "Or if we ever — God forbid — were to split up and she didn't have a legal connection to the baby then custody issues would be very difficult for her to pursue a legal custody relationship with the baby."

"Our law is based on heterosexual, patriarchal circumstances," Zavos says. "What we've had to do is take that framework and use it to then try and create legal relationships for people who don't fit that framework. Second-parent adoptions were made up — I think first in California — probably about 30 years ago. And now they are the law of the land."

The Supreme Court has weighed in on this, saying states have to legally recognize second-parent adoptions granted by courts in other states — no exceptions.

The Holley-Meirs' are now in the second-parent adoption process again, this time for their three-year-old, Jack. They began the process the day after President Trump was elected.

LGBT Advocates: Trump Administration's Stance In Cake Case Is Yet Another Letdown

"I was afraid that he wouldn't be at all committed to continuing protections for our family," Martha says.

President Trump has not said he intends to chip away at the rights of same-sex families. Still, Martha and Meredith say they're nervous.

Their attorney, Michele Zavos, says they should be. But she says she is seeing family law evolve in some jurisdictions.

"One thing happening around the country that I think is actually quite exciting is that parentage would be based on intent," she says. "For example, we have this statute in D.C. that says if both people intend to raise the child, they're both legal parents, biology notwithstanding. When we start moving toward intent, and getting away from biology, then we will have circumstances that everybody will fit into."

But many states haven't weighed in yet on whether or not intent is enough to establish parental rights for same sex couples. For now, Zavos says, second parent adoption remains the best way to ensure two women who are married can both claim to be the legal parents of their children.