Accessibility links
Views From: Warped Tour's 23rd Year Illustrator and reporter Chelsea Beck ventured to Merriweather Post Pavilion for a festival older than many of its attendees — of course there were fidget spinners. 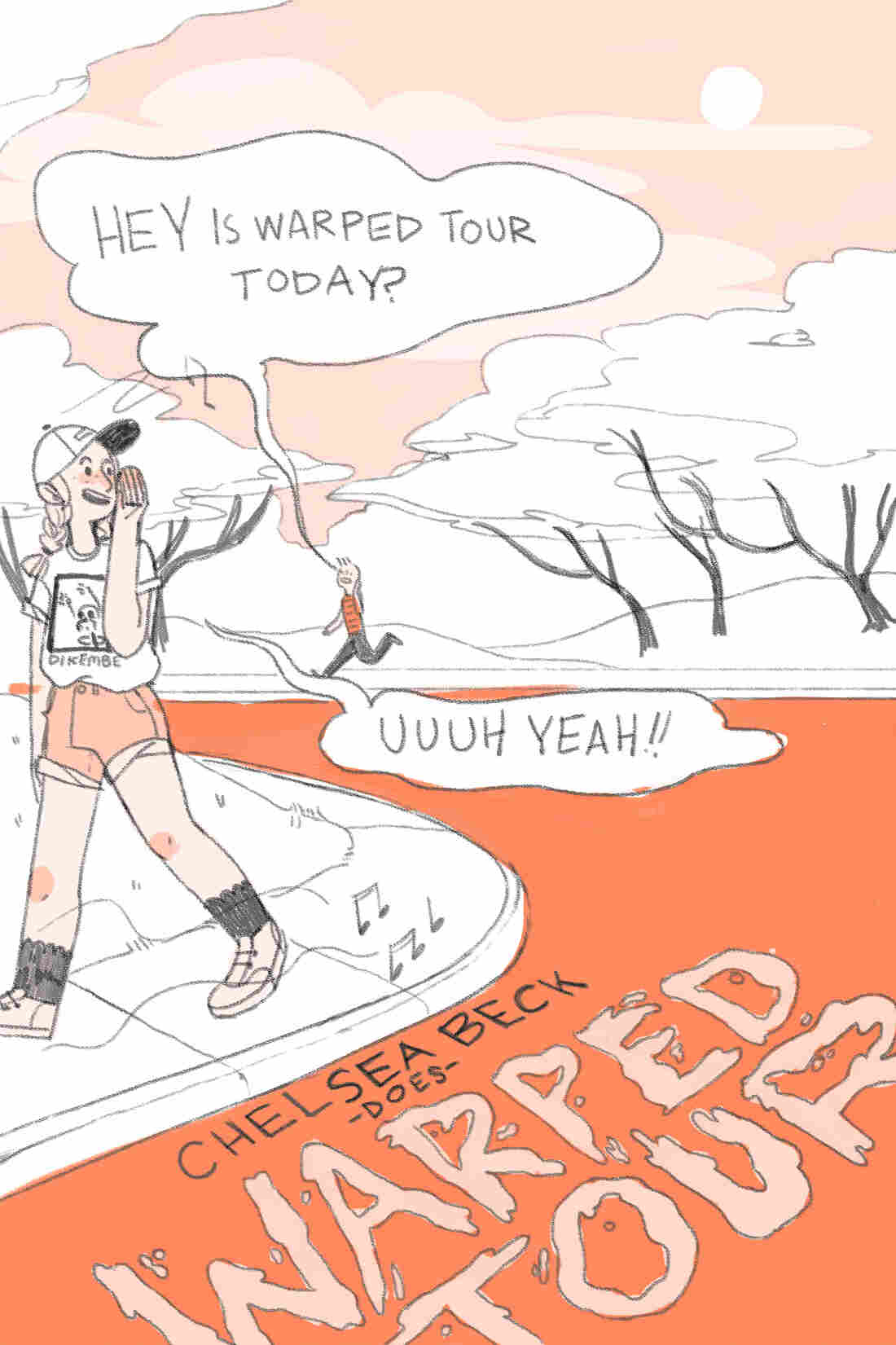 What is more nostalgic — for those of us with a past mall-punk phase — than a trip to Warped Tour, the 23-year-old, youth-oriented, aggressively branded touring music festival that visits around 40 U.S. cities each year? Twice I've attended and twice I've gotten sun poisoning in the name of ­­pop-punk (and ska, and hardcore, and rap).

This year, I returned to the fray as a visual reporter. It's been a year fraught with controversy; it's no secret that the music industry has been, and remains, male-dominated, leading to some devastating growing pains as the Tour tries to open its doors to a more diverse cast of fans and musicians.

(I highly encourage further reading on the topic, as many people have done a better job writing about this than I ever could; Jessica Hopper's piece "Where The Girls Aren't"; and Shawna Potter on The Dickies and a misogynistic rant during one Warped Tour stop this year that cast a dark cloud over the rest of the summer. ) 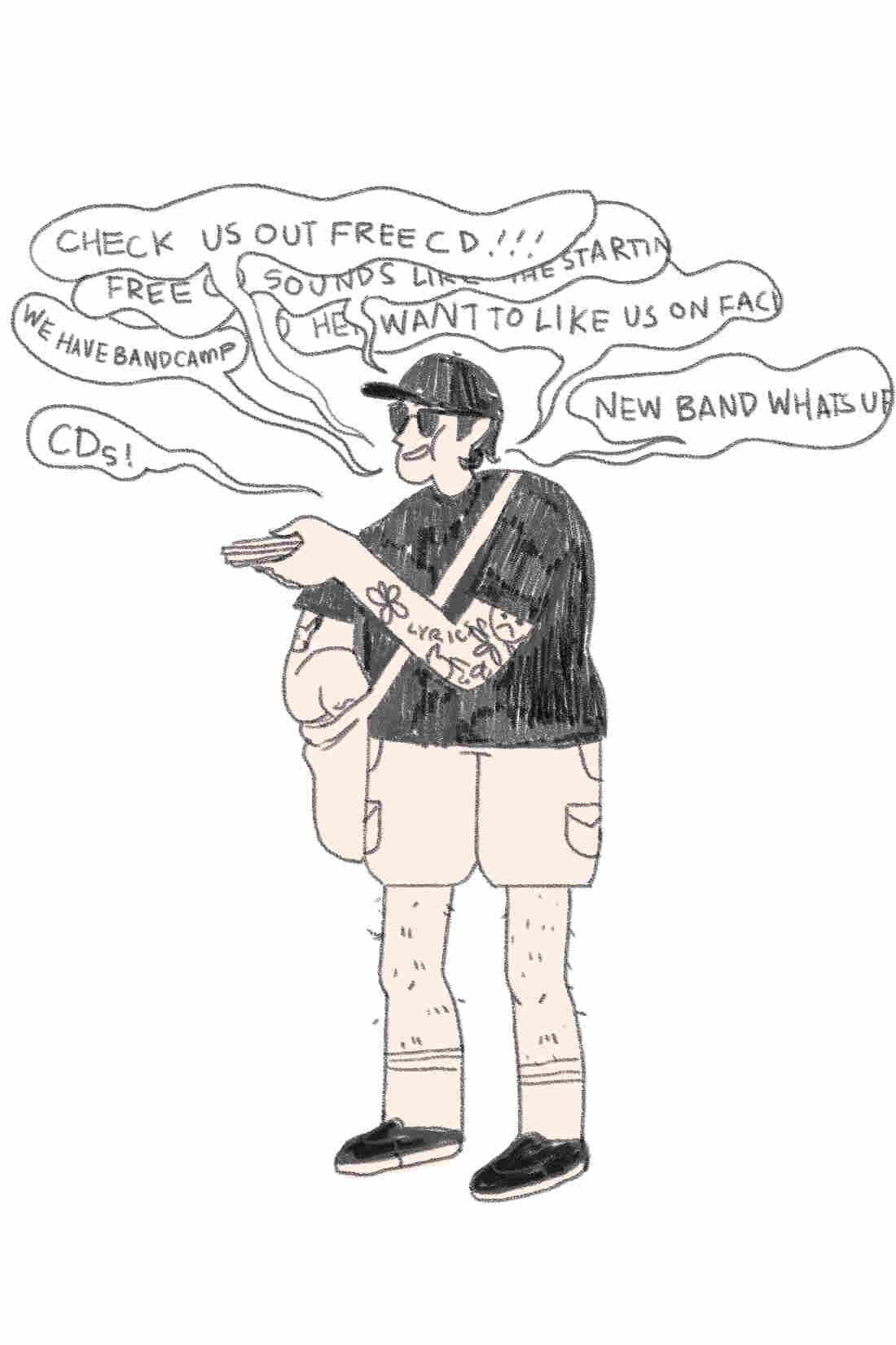 A man stood outside the gates, greeting everyone and trying to hand them his band's CDs. I ignored him (sorry), moving towards the big inflatable schedule to jot down set times. 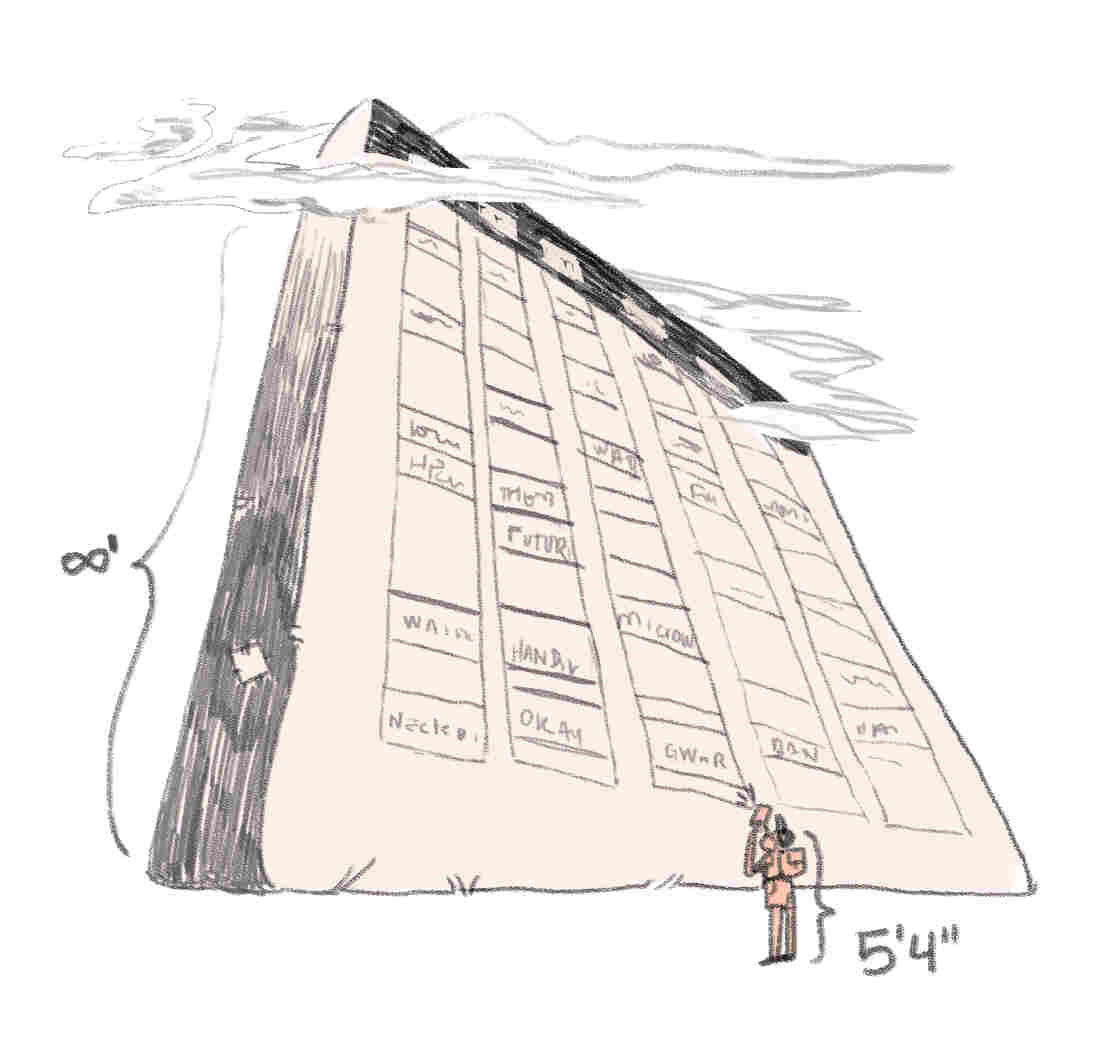 I started my day watching a set from hardcore band Blessthefall – during which a strange request came from the band's singer. 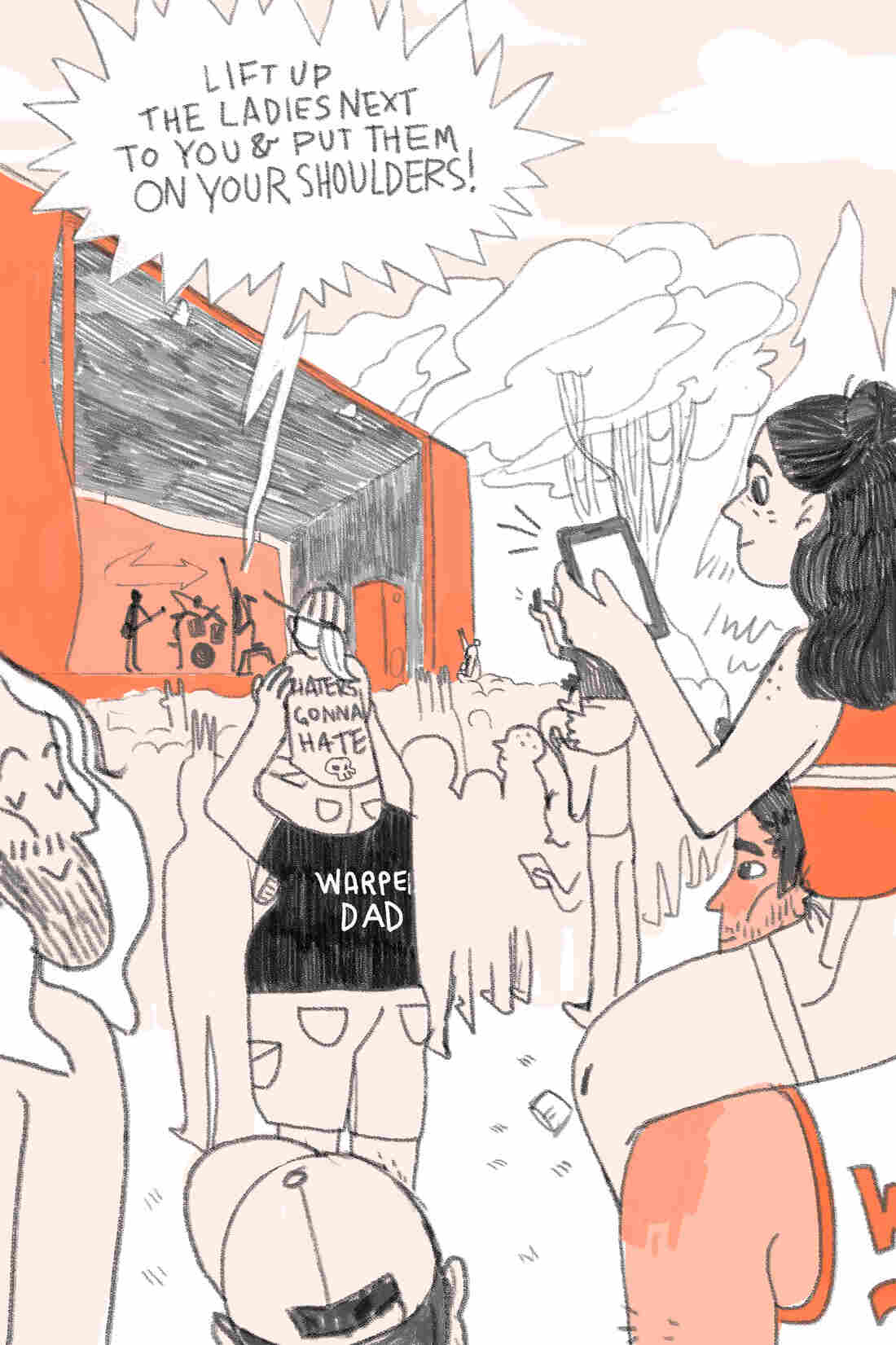 Thankfully, it didn't really stick and only a few girls were elevated; maybe attendees this year are more conscious of the feelings of the girl next to them? Maybe it's because there were only six girls in the crowd?

I've only been to two Warped Tours before this most recent one. The general feeling from the "lifers" I interviewed was that the crowd seemed older, sparser, and more "hardcore" this year. This seemingly unexpected change hit no one quite as hard as it hit... 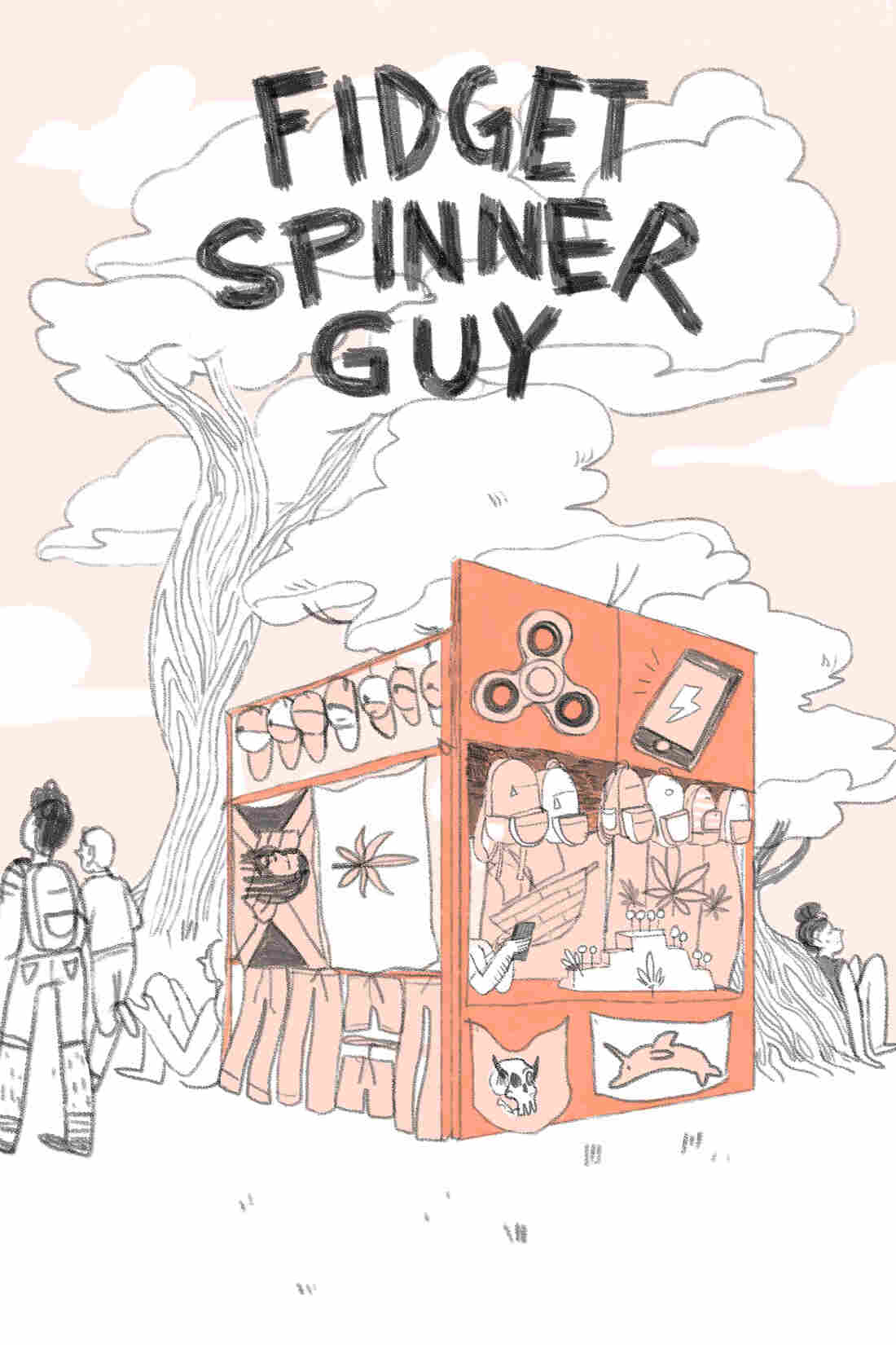 I asked Gibssn, a merchant whose stand proudly advertised the toy, how business was going — it was going poorly.

The excessive consumerism of festivals like Warped results in situations such as having no fewer than four stands selling identical merchandise, like marijuana-leaf-adorned socks, alongside whatever trends are moving the fastest, like the spinners.

The afternoon was a blurry montage: Skanking to the ska stylings of Save Ferris, eating those free malted milk balls (my only nourishment for the day), artfully dodging PETA literature. I watched Jule Vera's audience hold up her drums while she played in the crowd, and gawked at two teens scaling a tree for a better look at the rapper Futuristic's set. 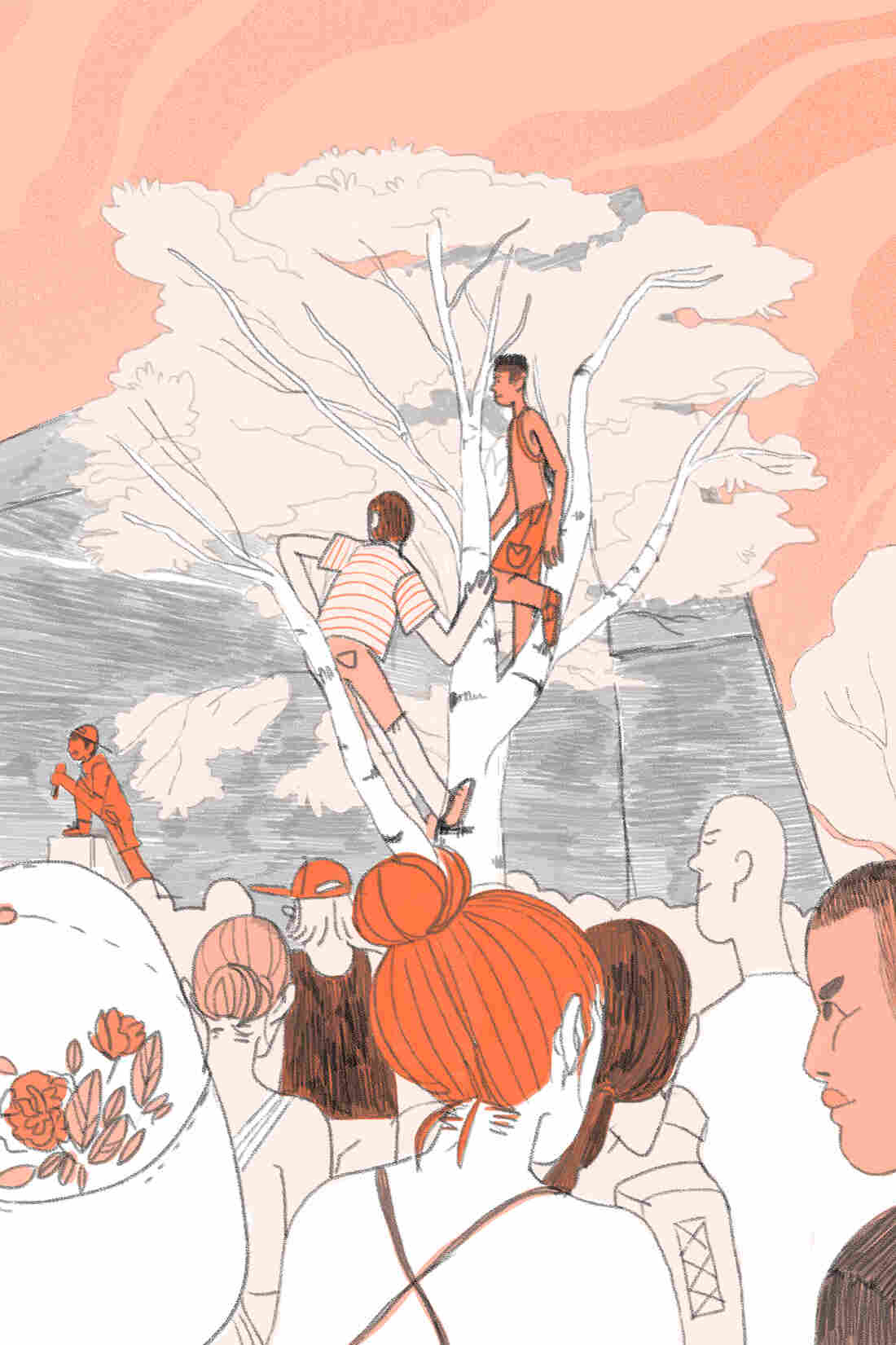 Matt, a friend of mine from a band performing that day called Neck Deep, met me at his merch tent, a conversation frequently punctuated with nervous teens asking for a photo with him, which he accepted gracefully. (Shockingly, no one wanted a picture with me.)

After agreeing to let me on stage during their set, we parted ways. All I had to do was text and he'd come rescue me from the barricade just before the show – and if my phone hadn't died, it might have been that easy. 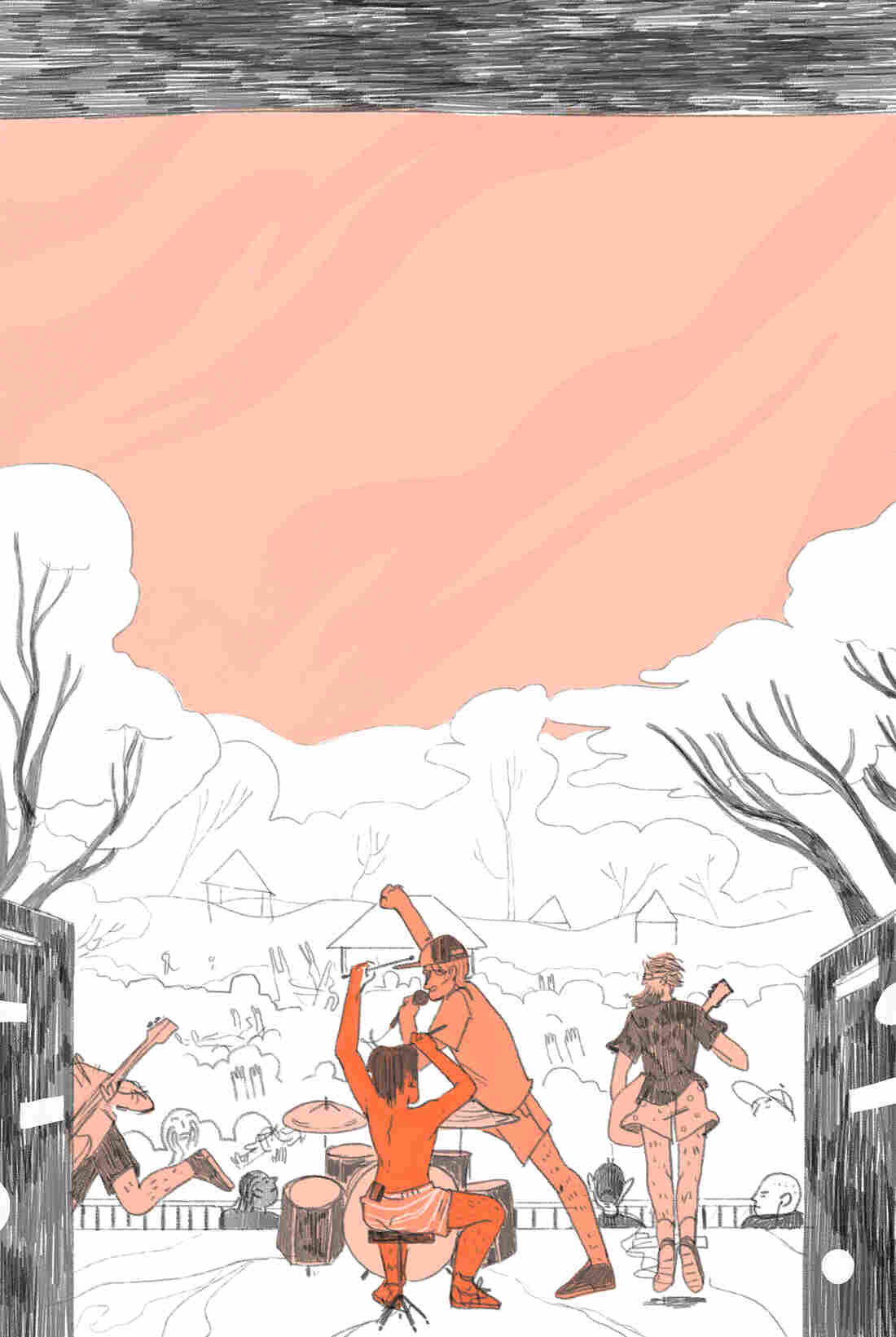 I stood directly behind the drummer, Dani, and scrawled a page of orange doodles, trying not to do anything too obtrusive (not that anyone was looking at me). 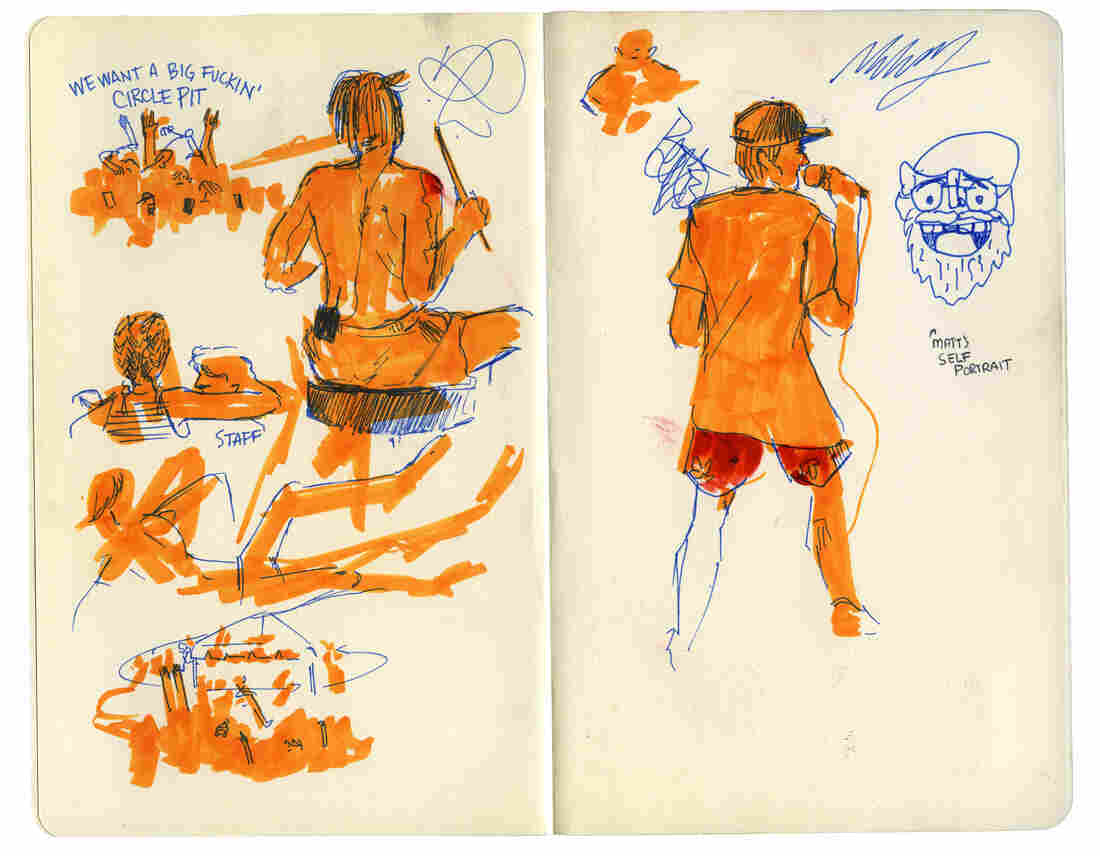 The set was over and, after a few sweaty hugs, it was time to go. Tents came down as I did my best to maneuver around innumerable Vans stickers, at least one shoe, and the occasional malted milk ball wrapper strewn about the grounds. Tomorrow, Merriweather Post Pavilion will be sparkling clean and a new crowd of music fans will fill the amphitheater. 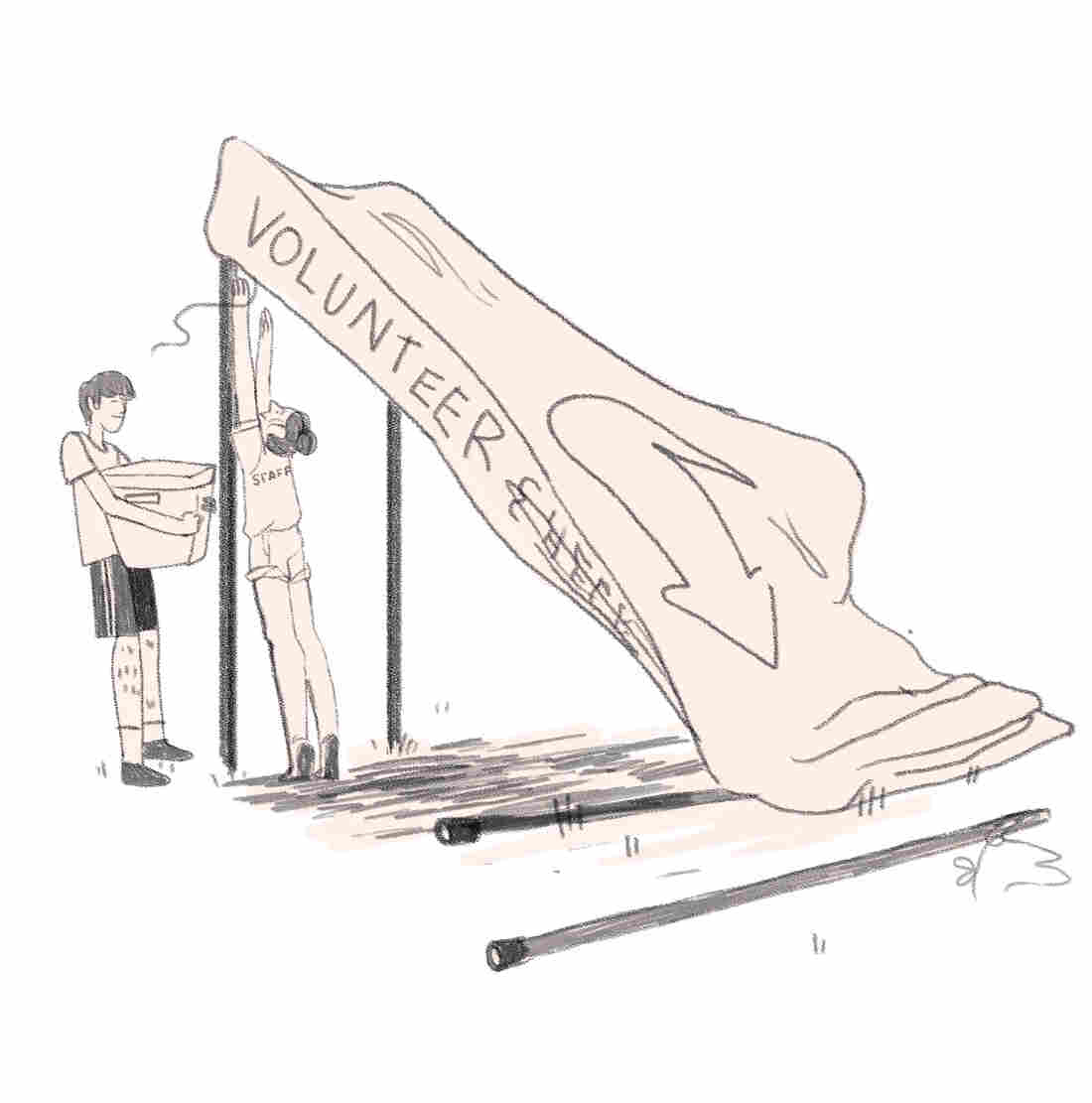 I left to the sounds of distant screaming for the last act of the night, GWAR. A thought about the shirtless man from earlier who had only come for their set flashed through my mind. I made my way to the parking lot amidst a sea of tweens calling their parents and considered the time since I was one of them. Maybe in a few years they'll be back at Warped Tour, notebook in hand, drawing their own story...

...Or maybe they'll just come back to see GWAR. 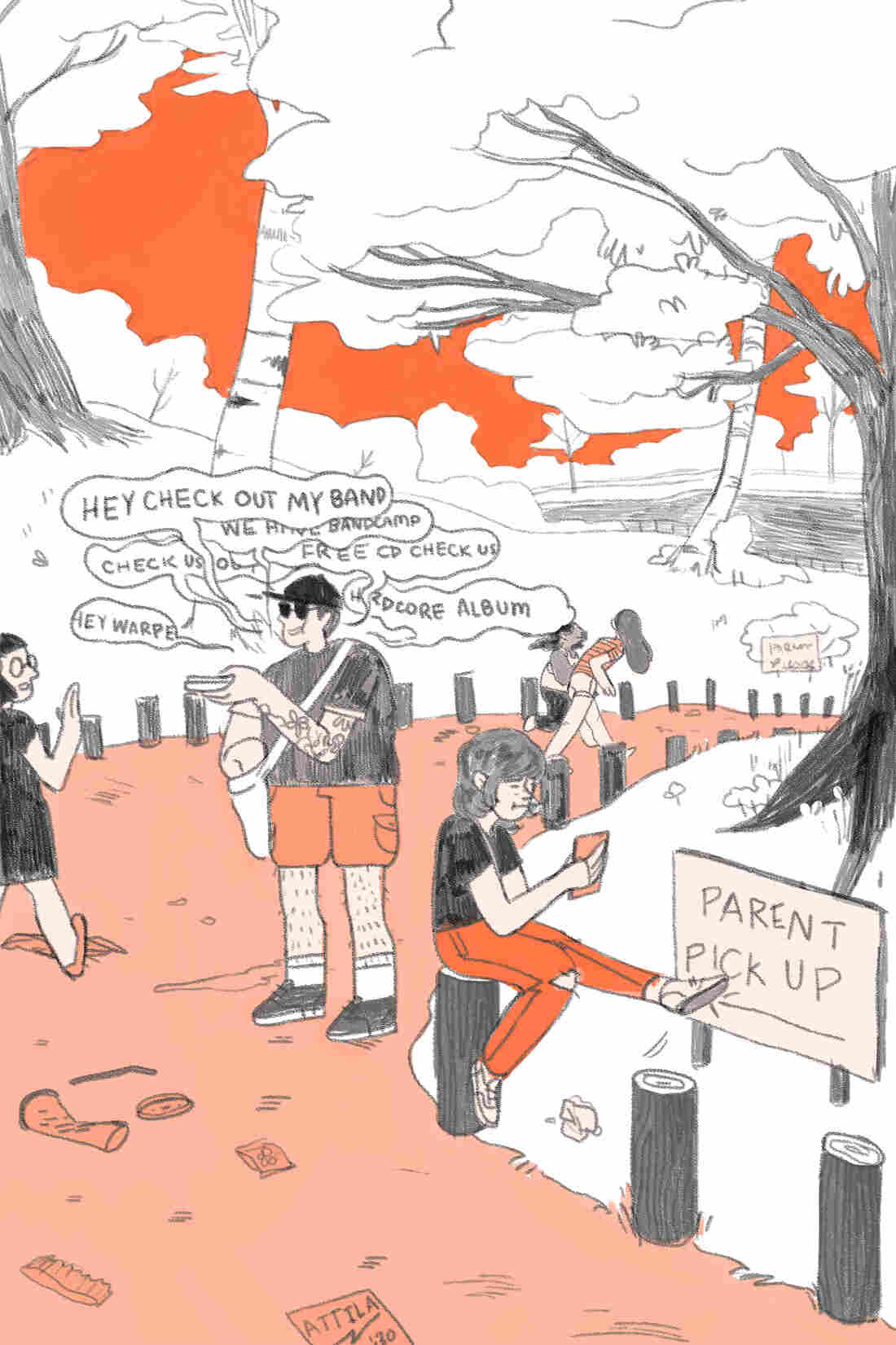