Accessibility links
On 'Sky Trails,' David Crosby Recounts His Regrets And Revelations The revered folk-rock songwriter returns with his third solo album in four years, which meditates on past mistakes and personal growth. 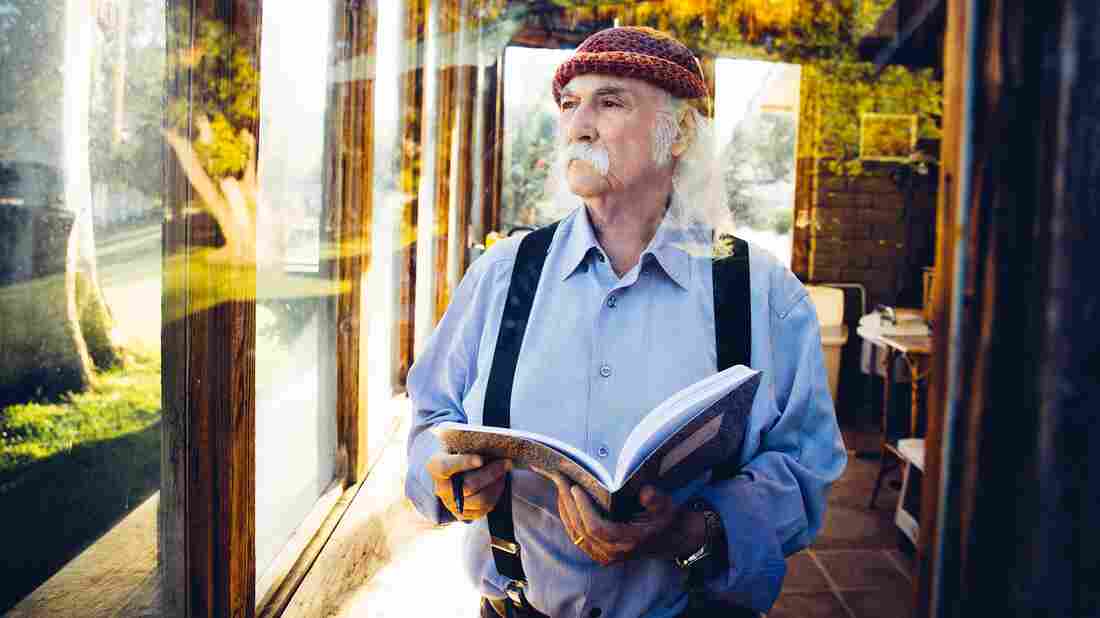 David Crosby's new album, Sky Trails, comes out Sept. 29. Part of his songwriting process for the album involved a tip Joni Mitchell gave him: write down everything. Anna Webber /Courtesy of the artist hide caption 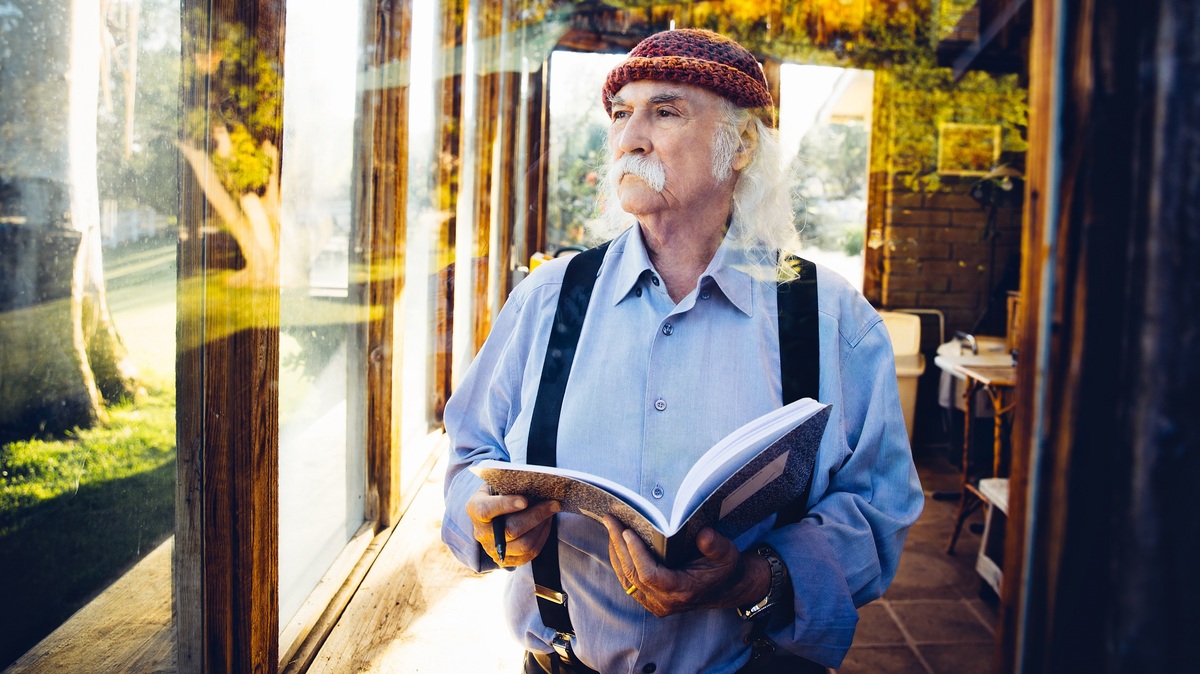 David Crosby's new album, Sky Trails, comes out Sept. 29. Part of his songwriting process for the album involved a tip Joni Mitchell gave him: write down everything.

Anna Webber /Courtesy of the artist

These days, David Crosby — one of the world's most recognizable rock stars — lives and works quietly in a ranch near Santa Barbara, Calif. with his three dogs—sometimes, he jokes, all named Fang.

Crosby's hair — a feature that has defined his image for a long time — is, well, a little more sparse. The walrus-y mustache is full-on grey. But it's still recognizably him.

In the '60s and '70s, Crosby was known as a collaborator with some of the biggest bands of the time. He was a founding member of The Byrds and is perhaps most known for his involvement in the folk-rock supergroup Crosby, Stills and Nash. Now, he's going through a creative rebirth as a solo artist. Sky Trails, his latest album, will be his third in less than four years.

It was at his Santa Barbara home — a quiet house overlooking a pool and the mountains — where this new record came together, starting off as ideas jotted on notebook paper.

Crosby says his habit of writing anything and everything down came from a lesson Joni Mitchell taught him.

It seemed like such basic advice, but became an important part of Crosby's creative process.

In fact, he put Mitchell's lesson to use in a song called "Sell Me A Diamond." Its hook includes the lyric, "You said it was conflict free / Such a beautiful concept, that such a thing could be," which came from a phrase he heard that caught his ear.

"I had been smitten with the phrase: 'conflict free,' 'conflict free diamonds,'" he says. "So I hear this phrase ... and it really appeals to me, because we're in conflict all the time. We've been at war someplace on planet Earth my whole life."

Crosby's got a knack for writing about issues without writing about them too directly. It shows in this song, where he finds a way to oppose the evil of the world without having it become too peacenik, filled with hippy clichés.

For a man who sings about "conflict free," Crosby has been anything but. Crosby, Stills and Nash, a group he'd been part of for roughly 50 years, no longer makes music together — largely because of internal squabbles that, Crosby admits, he was no small part of.

"Bands go through an evolution," Crosby says. "You start out and you're kind of in love with each other and it's all pretty exciting, and you like each other's music. Forty years later, when it's devolved to turn on the smoke machine and play your hits and you don't like each other, it can really spoil the gift that you had in the first place, which was the music. So quitting it was like jumping off a cliff. What's happened since, these records, is like growing wings halfway down the cliff. It has felt unbelievably great."

So, is Crosby totally at peace now?

Thanks to the current political climate, not quite. In 2006, Crosby, Stills and Nash, along with Neil Young, came out calling for President George W. Bush to go. They were cheered — and they were booed. But Crosby likes the role the band played then, and believes the protest movement wants him today.

"We need to come out and be that voice for those people," he says. "I get an email about once every two or three hours saying, 'Please, will you guys get over it and come back and be the voice?'"

And while talking about the potential to join the protest movement, Crosby sounds like he wants to be back out there with Stephen Stills and Graham Nash.

But he doesn't see it happening. And in his solo music, there is a feeling of loneliness that comes through as he reflects on how he damaged relationships in his career and his life.

In "Here It's Almost Sunset" he sings, "This is probably all my fault, this is the life I chose / For better or for worse."

Crosby says that lyric is meant to describe hurt he caused himself and others.

"I have to cop to it. This has been my choice," Crosby says. "[I've] got to take responsibility for it. I did lots of harm to myself and to other people. I've gone back to those people — it's one of the things you do when you go into that 12-step thing. You go back and you find the people that you hurt and you say, 'Look, I was crazy and I hurt you. And I'm apologizing; I'm sorry.'"

Crosby struggled with his health throughout his career, in large part due to the effects of drug addiction. In 1994, he was within days of dying before receiving a liver transplant. These experiences, too, inform his new music, especially in lyrics that reflect on his current state. "Here It's Almost Sunset" continues: "Here it's almost sunset / So why is the sun shining brighter? / How can that be? / How can I still see?"

"There's no excuse for me being alive considering what I did," he says. "Look at the people who are dead. Friends of mine: Jimi [Hendrix], Janis [Joplin] — I've lost a lot of people. Why them dead? Why me alive? I think about it. I don't have that answer. But I'm grateful. I'm grateful I'm alive; I'm really grateful I'm writing. And this is the weirdest thing: I'm really grateful I can still sing. I know a lot of people who can't, and it's probably the greatest joy in my life, getting in the singing."