Accessibility links
Trump Embroiled In 2 Controversies About Professional Sports, Race And Culture In remarks Friday night in Alabama, Trump took issue with NFL players who have knelt in protest during the national anthem. And on Twitter Saturday, he targeted Stephen Curry of the NBA. 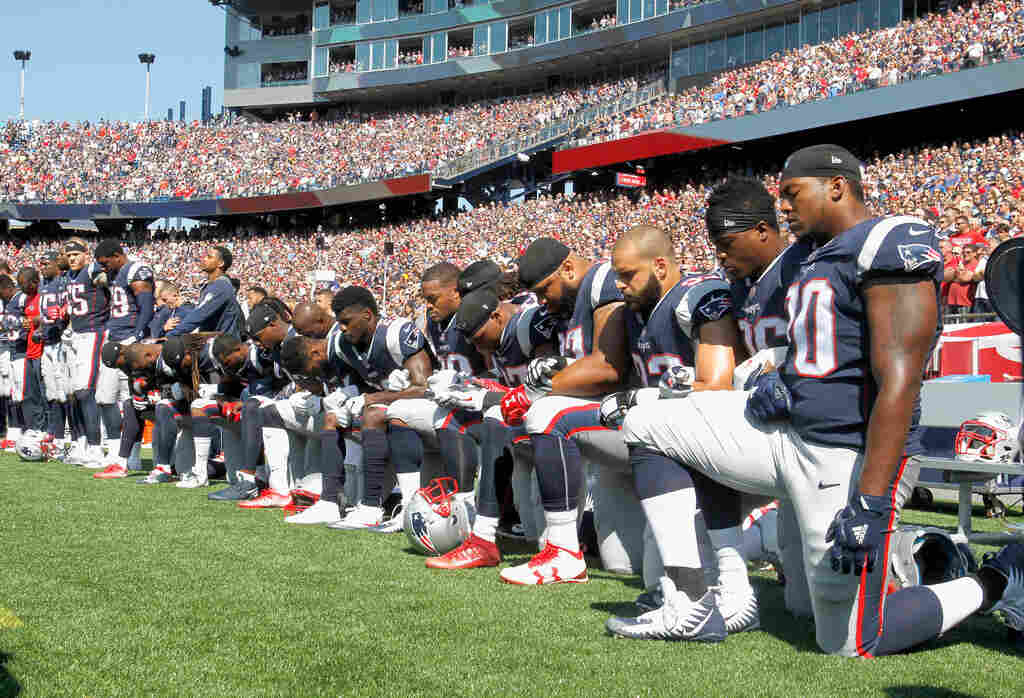 Members of the New England Patriots — and players across the league — kneel during the national anthem before Sunday's game against the Houston Texans. Jim Rogash/Getty Images hide caption 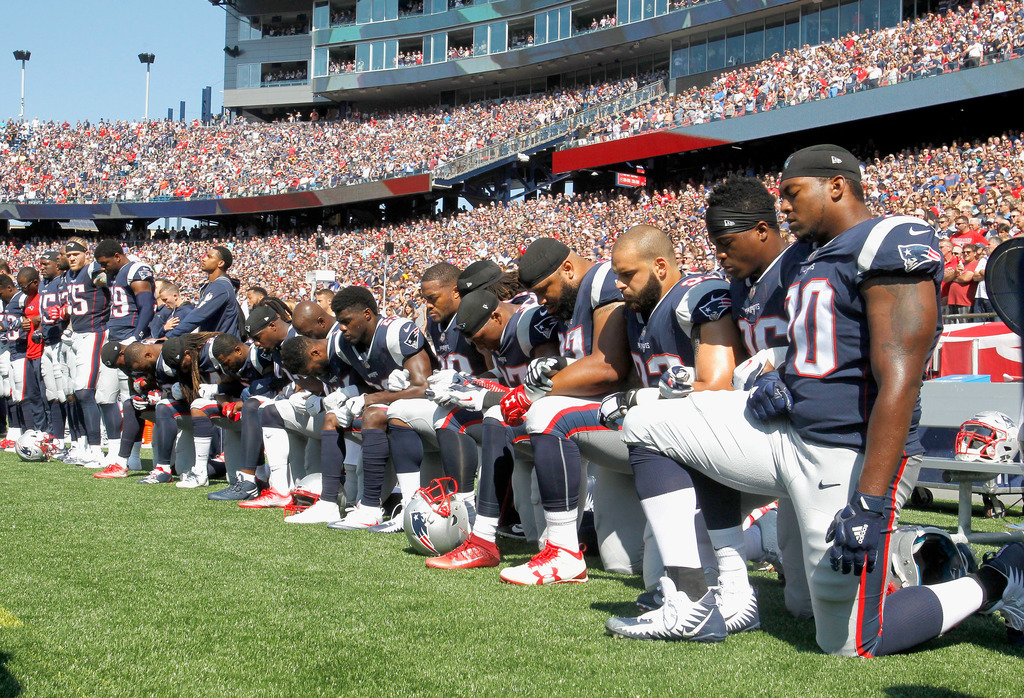 Members of the New England Patriots — and players across the league — kneel during the national anthem before Sunday's game against the Houston Texans.

Editor's note: This story contains language that some might find offensive.

In the span of less than 24 hours, President Trump catapulted himself into the center of two racially charged controversies involving professional sports, reigniting criticism that he is divisive and insensitive — a month after Trump struggled with criticism of his multiple remarks in response to violence in Charlottesville, Va.

The president was stumping for Sen. Luther Strange, R-Ala., at a campaign rally Friday night, when he used a segue in his speech that was supposed to convince voters that continuing to have Strange in the Senate would make all Alabamans winners — an argument with emotional appeal in a state known for its fierce love of football.

And while he was on the subject of football, Trump took the opportunity to expound on his thoughts regarding NFL players, like Colin Kaepernick, who last year began kneeling during the national anthem in protest over perceived social injustices against African-Americans. Trump's take: It's unpatriotic and NFL team owners should fire those refusing to stand.

"Wouldn't you love to see one of these NFL owners, when somebody disrespects our flag, to say, 'Get that son of a bitch off the field right now'?" he said to roaring applause.

On Saturday morning, Trump took on Stephen Curry of the NBA champion Golden State Warriors in a tweet. The president rescinded an offer for what has become a traditional celebratory visit to the White House for any championship team of a major professional sport.

He wrote: "Going to the White House is considered a great honor for a championship team. Stephen Curry is hesitating, therefore invitation is withdrawn!"

Going to the White House is considered a great honor for a championship team.Stephen Curry is hesitating,therefore invitation is withdrawn!

The president was reacting to Curry's statement Friday that the popular star player didn't want to visit the White House and meet with Trump because Curry believed that passing on the traditional event would send the message that "we won't stand for" some of Trump's past remarks. "This is my opportunity to voice that," Curry also said, of the possibility of not going to the White House as expected.

Saturday afternoon, Trump was back online attacking the NFL.

"If a player wants the privilege of making millions of dollars in the NFL, or other leagues, he or she should not be allowed to disrespect our Great American Flag (or Country) and should stand for the National Anthem. If not, YOU'RE FIRED. Find something else to do!" Trump tweeted.

If a player wants the privilege of making millions of dollars in the NFL,or other leagues, he or she should not be allowed to disrespect....

...our Great American Flag (or Country) and should stand for the National Anthem. If not, YOU'RE FIRED. Find something else to do!

While none of Trump's tweets or remarks were explicitly about race, they led to an escalating war of words between the president and black athletes, activists and celebrities on social media. And the president, who was almost immediately cast as being divisive, took a serious pummeling from NFL team owners and notable black public figures.

NFL Commissioner Roger Goodell said in a statement Saturday morning, "Divisive comments like these demonstrate an unfortunate lack of respect for the NFL, our great game and all of our players."

Late Friday night, before Trump had sparked controversy involving Curry, Max Garcia of the Denver Broncos couldn't help comparing Trump's comments about kneeling in the NFL during the campaign rally with how he responded to events in Charlottesville, Va., last month that left one counterprotester dead.

"What an emphatic response, where was this passion in response to Charlottesville..." Garcia wrote on Twitter with a video of Trump.

What an emphatic response, where was this passion in response to Charlottesville...🤔 https://t.co/OkVZTdloXx

Jed York, CEO of the San Francisco 49ers, for whom Kaepernick played last year when he began the kneeling protest, issued this statement:

"The callous and offensive comments made by the President are contradictory to what this great country stands for. Our players have exercised their rights as United States citizens in order to spark conversation and action to address social injustice."

Dolphins owner Stephen Ross said, "Our country needs unifying leadership right now, not more divisiveness. We need to seek to understand each other and have civil discourse instead of condemnation and sound bites."

Meanwhile, current and former luminaries in the NBA weighed in online Saturday expressing support for Curry and criticizing Trump.

Basketball megastar LeBron James, who has nearly as many followers on Twitter (38.4 million) as Trump does on his personal account (39 million), defended Curry, his sometimes rival on the court.

James wrote, "U bum @StephenCurry30 already said he ain't going! So therefore ain't no invite. Going to White House was a great honor until you showed up!"

U bum @StephenCurry30 already said he ain't going! So therefore ain't no invite. Going to White House was a great honor until you showed up!

James later recorded and posted a two-minute video to Twitter in which he said, "It's not about dividing. We as American people need to come together even stronger."

"It’s not about dividing. We as American people need to come together even stronger.” — @KingJames responds to @realDonaldTrump’s comments. pic.twitter.com/UHpzXpb42K

Chris Paul, who plays for the Houston Rockets and is president of the NBA Players Association, questioned the president's attention to the issue in the first place. "With everything that's going on in our country, why are YOU focused on who's kneeling and visiting the White House??? #StayInYoLane," Paul wrote on Twitter.

By Saturday afternoon, the Warriors formally announced they were not visiting the White House — or Trump. "We accept that President Trump has made it clear that we are not invited," the team said in a statement.

"In lieu of a visit to the White House," the NBA champions added, "we have decided that we'll constructively use our trip to the nation's capital in February to celebrate equality, diversity and inclusion — the values we embrace as an organization." 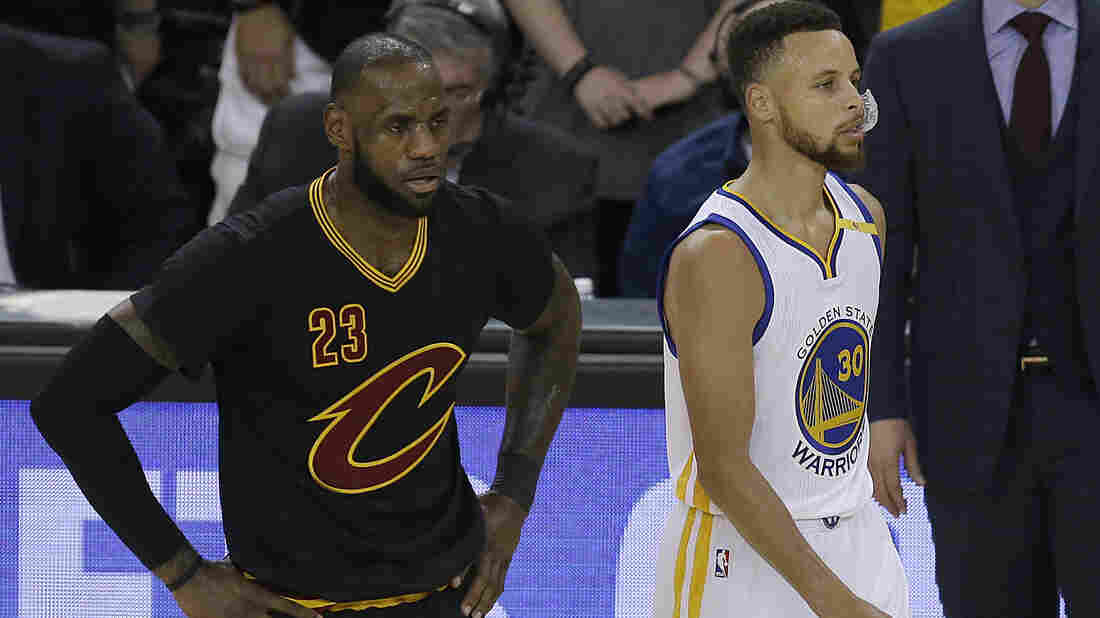 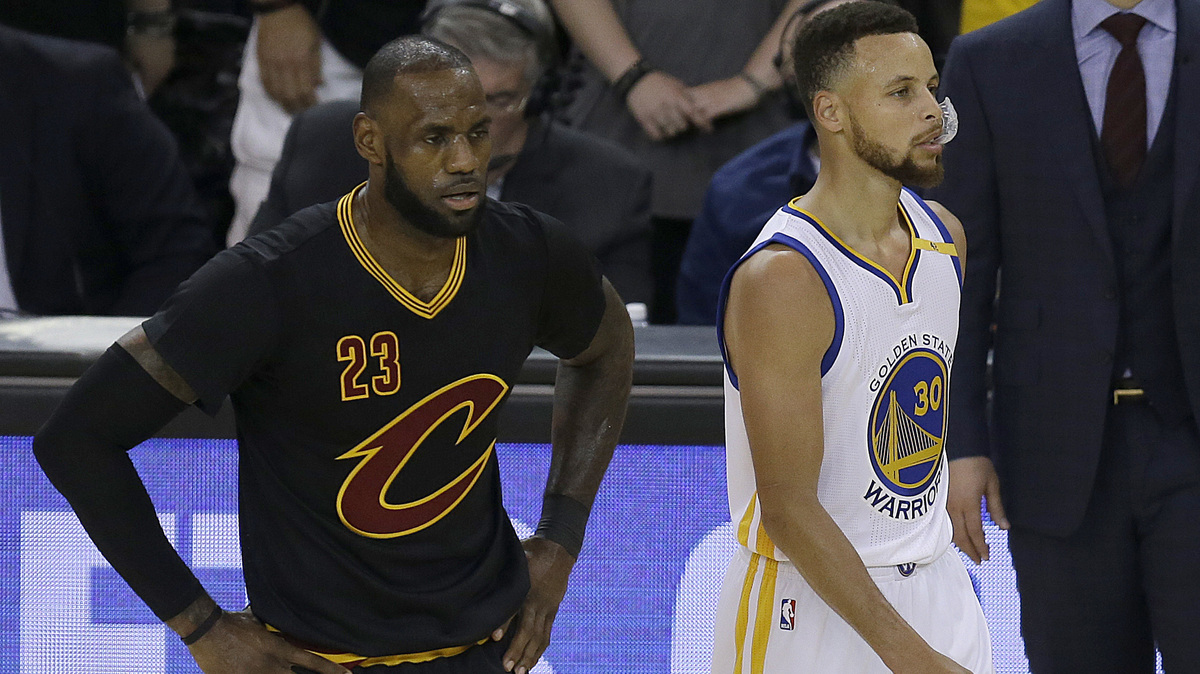 NBA Commissioner Adam Silver said he was "disappointed" the team would not be visiting the White House. Curry, for his part, suggested Trump's effort to target him was beneath the dignity of the presidency.

Rep. Adam Schiff, D-Calif., took a jab at Trump for comments he has made in the past ridiculing Sen. John McCain, R-Ariz., for being of prisoner of war. "And if a person wants the privilege of serving as President, they shouldn't be allowed to disrespect military heroes who were taken prisoner," Schiff tweeted.

And if a person wants the privilege of serving as President, they shouldn't be allowed to disrespect military heroes who were taken prisoner https://t.co/mvuijIyXBc

California's lieutenant governor and former San Francisco mayor, Gavin Newsom, a Democrat, congratulated the Warriors for the stance. "Couldn't be more proud of the @warriors. Thank you for speaking truth to power and standing up for our fundamental California values," he wrote.

Sen. Ben Sasse, R-Neb., a frequent critic of the country's growing divisiveness, suggested that if the kneeling protest spread, NFL players would be playing into Trump's hands: "btw, Trump wants you to kneel--because it divides the nation, with him and the flag on the same side. Don't give him the attention he wants," Sasse tweeted.

btw, Trump wants you to kneel--because it divides the nation, with him and the flag on the same side. Don't give him the attention he wants. https://t.co/ic5Vc9oGyB

Seemingly answering Sasse, Trump backers argued that the president's comments have nothing to do with race and are purely about patriotism and respect for the flag.

"Has our world turned upside down! Our President criticized for believing our flag & anthem should be respected & honored #StandForTheFlag," Ronna Romney, chairwoman of the Republican National Committee, wrote on Twitter.

Some in the Washington press corps wrote Saturday that the president is deliberately using coded language to appeal to his base of white voters who see themselves as part of an aggrieved group in America, rapidly losing power and influence relative to ethnic and racial minorities.

"To address a largely white crowd as 'people like yourselves,' and refer to protesting athletes, often African American, as 'those people,' does nothing to heal the wounds of Charlottesville," political journalist Mike Allen wrote on Axios.com Saturday morning.

Ron Brownstein, another seasoned political journalist in D.C., spent most of the day on Twitter putting forth the argument that exploiting racial and economic anxieties and divisions was one of Trump's key political strategies.

"Point of this fight is not very hard to find- more signaling to white racial resentment, which has been central to Trump message from day 1," Brownstein tweeted.

Brownstein reaffirmed his point in a later tweet when another journalist questioned whether Trump was utilizing any strategy at all. "Yes, pretty clearly from day 1: to appeal to parts of older, blue-collar, non-urban white America most uneasy about demographic & eco change," Brownstein wrote.

Another journalist was more blunt. "There is an unmistakable racial element at play, since he is targeting prominent black players," CNN media reporter Brian Stelter wrote Saturday afternoon about Trump's NFL comments.

And Stelter's CNN colleague Chris Cillizza saw something similar, writing Saturday that the context of Trump's criticisms was inherently racial given that both the NBA and NFL have mostly white team owners and mostly black players. Cillizza went on to point out that Trump's comments Friday and Saturday bore two rhetorical hallmarks that went back to his presidential campaign: using racially coded language and espousing a seemingly simplistic view of the black community.

Meanwhile, throughout most of Saturday, the hashtag #TakeAKnee trended on Twitter across the U.S., as people sympathetic to Kaepernick wondered about what NFL players would do Sunday and as they talked about posting photos of themselves kneeling in solidarity.

On Saturday night, the Kaepernick-style protest spread to professional baseball. 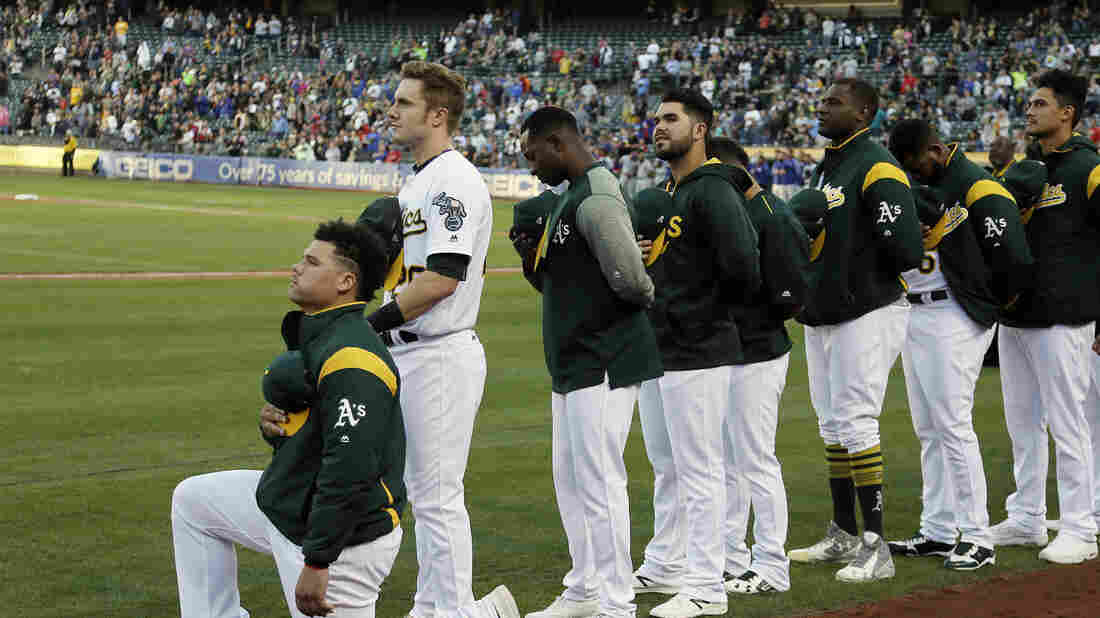 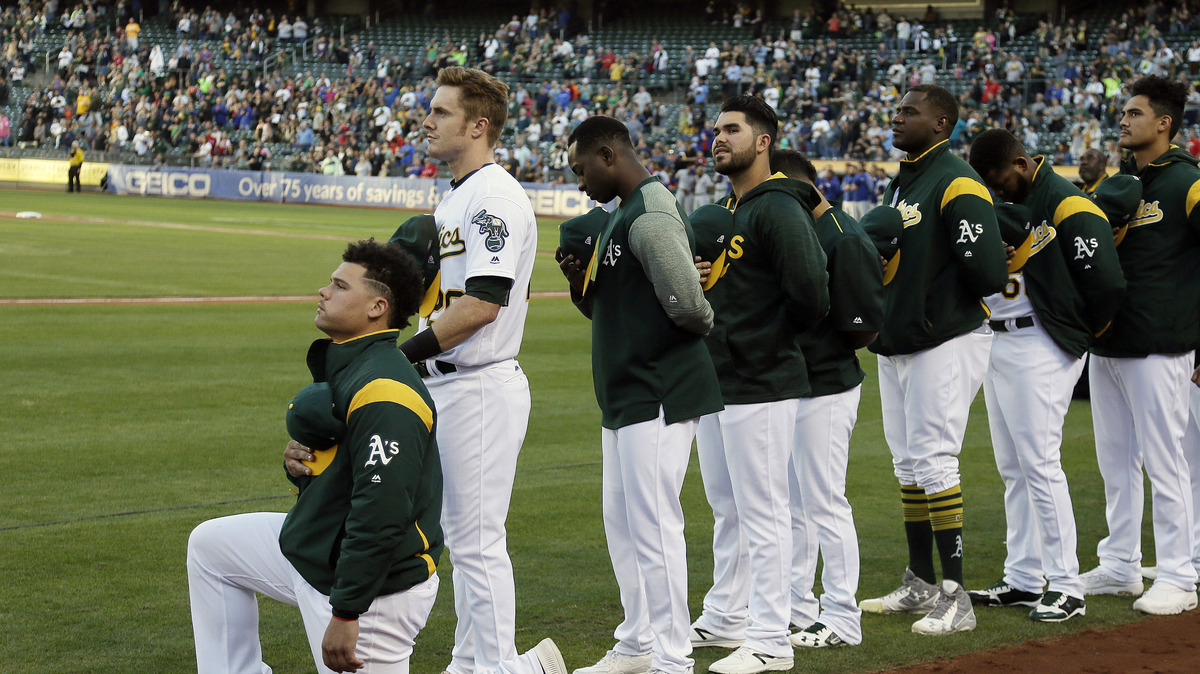 Catcher Bruce Maxwell of the Oakland A's took a knee during the national anthem before a game Saturday night in California. Like the rest of his team, Maxwell had his hand on his heart and was facing the flag; as Maxwell knelt, a teammate is shown in photos with a comforting hand on Maxwell's shoulder.

"This now has gone from just a BlackLives Matter topic to just complete inequality of any man or woman that wants to stand for Their rights!" Maxwell posted on Twitter on Saturday.