Accessibility links
Confessions Of A 'Big Bang' Watcher, 11 Seasons In The Big Bang Theory is the most popular scripted show on broadcast TV. But that doesn't keep people from asking the question: "Why do you watch that show?" 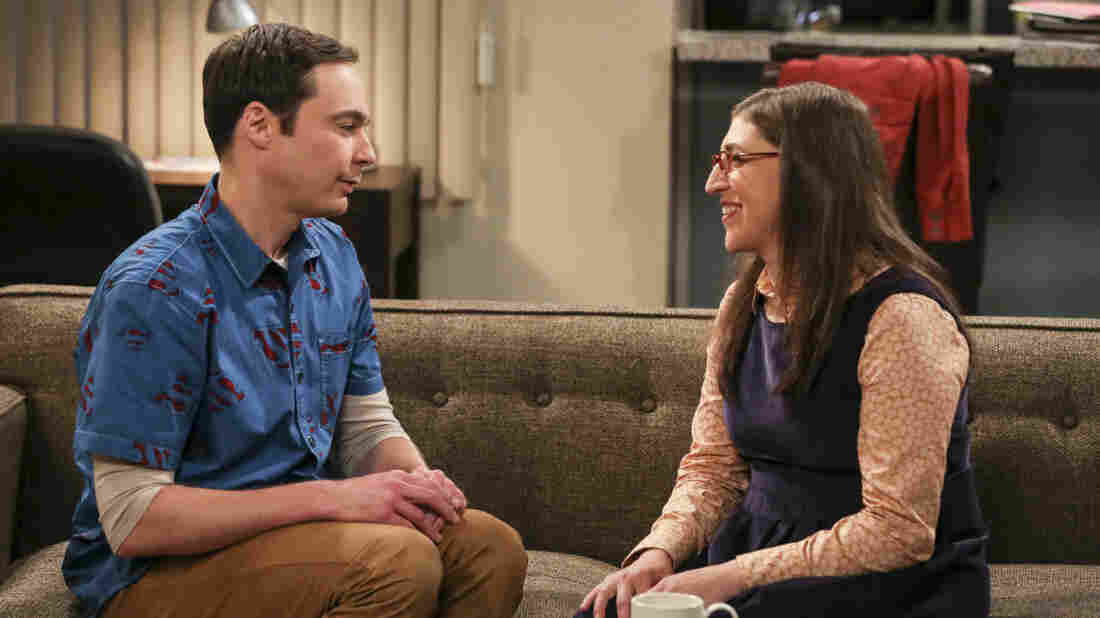 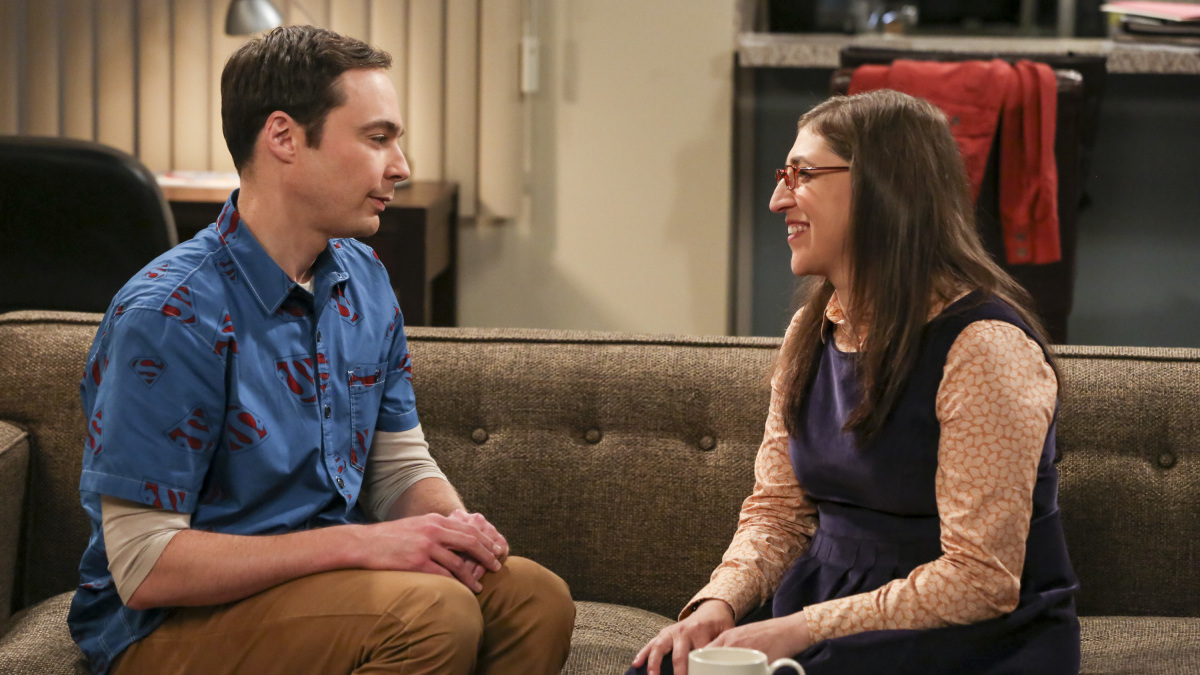 Imagine you're looking at a Venn diagram of people who really liked Darren Aronofsky's mother! and people who watch CBS's The Big Bang Theory. It is a very small circle next to a very big circle. Now, look closer. Closer. Closer. Do you see that tiny area of overlap? Do you see that there is one lonely person inside of it, waving? That's me. I like weird art movies that are maybe about annoying poets and about the Bible and might be saying something about herbalism? And I also like The Big Bang Theory. Well, sort of.

Despite the show's popularity, when I tell people I sort of like it, they often react as if I had said, "I have a raccoon in my desk. It does not have rabies, probably." By this, I mean that they are (1) surprised, (2) curious, (3) wary, and (4) gone quickly. And also that (5) I feel like they like me a little bit less. So as my gift to you, and so that you never again have to be the person on Twitter saying, "IS THAT STILL ON? WHO LIKES THIS SHOW?" I am stepping forward. It is still on! I still enjoy it! I am not sure whether I should! I watch screeners of it ahead of time! I own several seasons of it on DVD!

A disclosure: the original title of this post was "I Say Bazinga, They Say Po-tah-to." I say this to acknowledge that part of me is, always was, and always shall be a fan of the worst, dopiest, corniest jokes you could conceive of. Have you ever had a notion strike you along the lines of, "The joke I just thought of is so stupid, and yet I am devastated that I have no one to tell it to"? If you have, it's only because I am not beside you. Keep this in mind. It might be relevant.

"Bazinga!", of course, is the catch phrase of Sheldon Cooper, played by Jim Parsons. Sheldon says it right after he makes a joke. He's one of the lead characters on The Big Bang Theory, which begins its 11th season on CBS Monday night. It's about some guys who are scientists, and they know some women who are mostly also scientists. Monday's premiere is immediately followed by the premiere of Young Sheldon, a prequel series that focuses on Sheldon's childhood: the Muppet Babies of multi-camera sitcoms.

The Big Bang business has been highly profitable for a very long time in an environment where hits are hard to find. Furthermore, Parsons has won four Emmy Awards, and Big Bang has been nominated for Outstanding Comedy Series five times. It remains hugely popular: last season, almost 19 million people watched it on average, making it the most popular scripted show on broadcast television. (The only thing that beats it in pure viewership numbers is football.)

Another disclosure: As a person who is uncool in any number of ways, many of them visible from space, I acknowledge that the fact that I often enjoy The Big Bang Theory might be, for many people, the most uncool thing about me. You see, liking The Big Bang Theory is common, but it is not cool. In fact, I often see it used as shorthand for "a popular thing that people like that is bad, and if you like it, you are bad." Sometimes, this is said even by people who have actually seen it once or twice.

(By the way, we must account for the inevitability of backlash when personal taste is at issue, so: For every tweet I receive explaining that I am an idiot lacking in discernment, I will add $1 to the amount I have already vowed to spend on myself during my birthday trip this fall. Name-calling is worth two dollars. So don't worry about me: Mama needs a massage anyway. I would have made this a fundraiser for something worthwhile, but that would have been paying nice people, eager to support a good cause, to insult me for charity.)

Let me try to answer the question: "Why do you like this thing?"

I know the arguments against the show. I'm not sure they're all even wrong. First up: not funny! To that I say: funny to me! And we immediately are at an impasse.

The next objection I often hear: It is mean to nerds! This is true, up to a point, in much the same way Seinfeld was mean to single New Yorkers and Silicon Valley is mean to men in tech. I've never been persuaded that Sheldon and Leonard and their friends' ridiculousness is any more pronounced than the ridiculousness of any other ensemble on a high-silliness comedy. Furthermore, as the show has progressed and they've gotten older, the guys are much more defined as scientists than as nerds in the way most people would use that term. They get excited about new Star Wars movies, but they're not defined by their voracious consumption of culture the way they once were.

Objections mount: Their nerd-dom meant these guys couldn't have successful romantic relationships, and that's insulting! Point taken — that's a stereotype that, as you know if you have ever seen people canoodling at fan events or podcast festivals, you know is not true. (Shout-out to cosplayers making out while waiting in line.) In defense of the show, though, futile and sometimes creepy horndoggishness, as a theme, hasn't lasted: three of the four of the guys are now happily coupled and very much in love. Two are married. (Getting Howard, in particular, out of single mode, meaning he stopped being a gross aspiring player, did the entire program a world of good.)

It's probably in its treatment of relationships, in fact — and, by extension, women — that Big Bang Theory has changed the most from its original incarnation. It launched in 2007 as a show mostly about Sheldon and Leonard ogling Penny through her apartment door, but — as I wrote (gulp) seven years ago — it managed to improve itself quite a bit, making Penny funnier, giving her more personality, and changing her relationship to the guys from empty ideal to true friend.

Furthermore, it cast Melissa Rauch and then Mayim Bialik to play Bernadette and Amy, Howard and Sheldon's partners respectively. The women now have their own friendships, their own jokes, their own scenes in which the men aren't even involved. In fact, early in this eleventh season, two female characters who are professionally accomplished have a conversation about their victories and how they do and don't talk about them that rang very true, is very funny, and didn't quite sound like anything I'd heard on television before. There are a lot of times when the male Big Bang characters leave me cold, but I have come to like the women very much. There aren't that many hugely popular properties that feature two women who are highly accomplished in science who are not using it on dead bodies to solve crimes.

Next objection: Retrograde sociopolitical garbage, even aside from gender politics. Response: This one is true, at least to a point. This is what frustrates me most about Big Bang, that it makes it hard for me to embrace its cornball sense of humor like I'd like to. It does often seem to take its cues on various issues — especially LGBT issues, as well as the deployment of Raj's accent — from about 1995. For years, it shared Friends' smarmy fondness for gay-panic jokes around its male BFFs, as well as Friends' (and other comedies') attachment to the old "the most embarrassing thing that ever happened to this guy was kissing a woman who turned out to be transgender" joke. That last one was a while ago; would they come up with it now? I don't know.

I don't recommend this show the way I would if it didn't have — and if it hadn't had — those lazy jokes. (Lazy fat jokes, too, but practically everything has those. You refuse to forgive those, and you give up most of television.) I like to say I don't believe in guilty pleasures, but this is as close as I get: a show that makes me laugh, with a bunch of performances I admire, that I don't exactly recommend.

On the other hand, I can think of very few shows on broadcast or cable television that I would recommend without thinking about times when I wondered whether they couldn't, for lack of a better phrase, be better creative citizens. More engaged, more fair, less facile in their stereotyping, more inclusive, more thoughtful — even comedies. Even some of the best comedies. It's not an excuse, by any means; it's only to say that if you're curious how anyone watches this show, how anyone can overlook those things? In my case, it's that I'm fairly accustomed to making those trade-offs, and not only here. In shows I love. In shows you probably love.

But if you only hear me out about one thing about which I am perfectly happy to act as the a deranged crank of the internet, please hear me about this: stop saying Big Bang Theory has a laugh track. Or "canned laughter." It has a studio audience. We all know, and the internet will tell you, that only hacks who had no confidence in their comedy would ever use a laugh track from a machine. You know, hacks like the guys who made M*A*S*H.

Sometimes I like The Big Bang Theory. Sometimes I just watch it. That, at least, should be uncontroversial.