Accessibility links
A Former Speechwriter Looks Back On His 'Hopey, Changey' Years With Obama David Litt says writing speeches and jokes for former President Obama was often a delicate task: "There's a whole industry of people trying to take your words out of context." 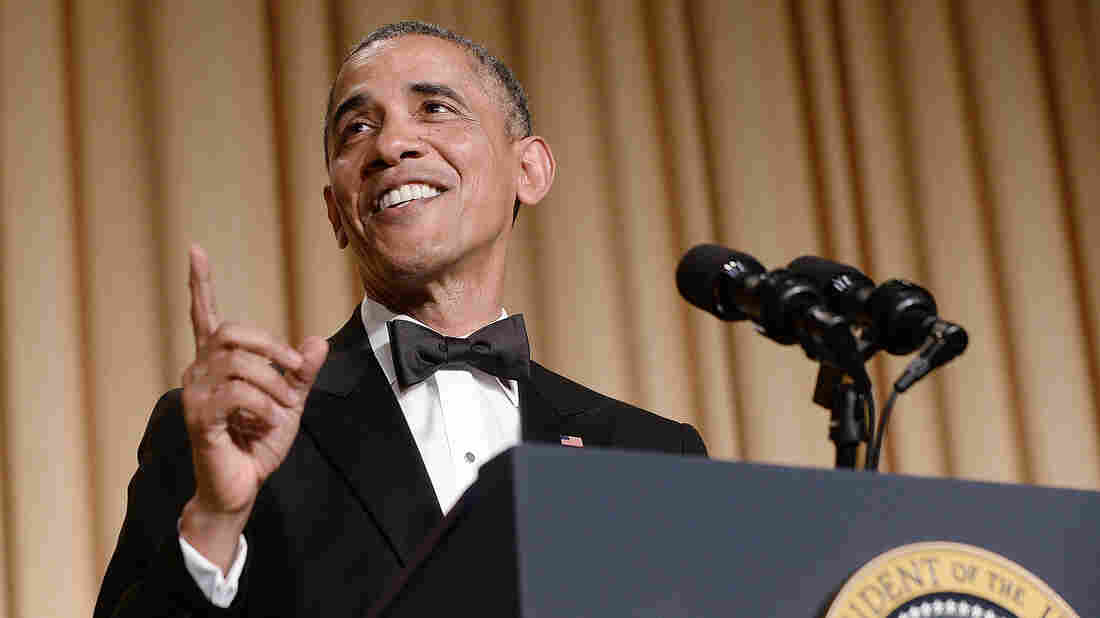 President Barack Obama speaks at the 2014 White House Correspondents' Association Dinner in Washington, D.C. Speechwriter David Litt, who helped craft the president's comedy routine that night, says, "Some of the joke is always that it's the president telling a joke." Olivier Douliery/Getty Images hide caption 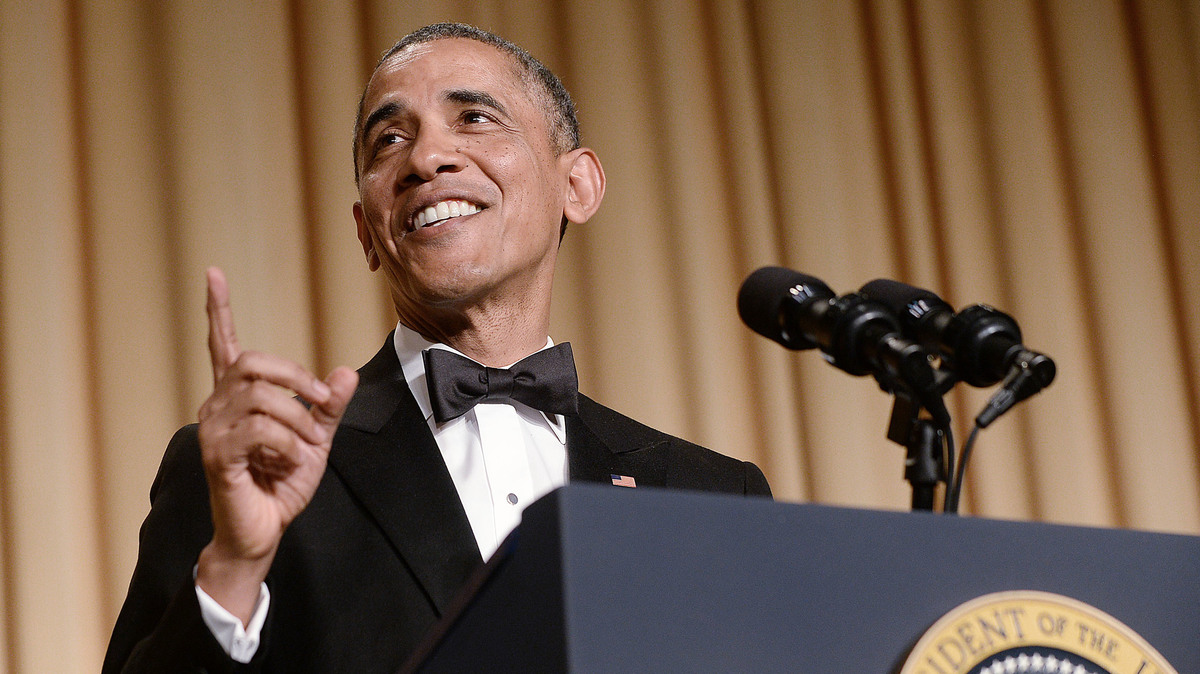 President Barack Obama speaks at the 2014 White House Correspondents' Association Dinner in Washington, D.C. Speechwriter David Litt, who helped craft the president's comedy routine that night, says, "Some of the joke is always that it's the president telling a joke."

David Litt was 24 years old and just a few years out of college when he landed a job writing speeches for President Barack Obama — an experience he calls "surreal and completely terrifying."

Though he was initially assigned the speeches no one else wanted to write, Litt eventually became a special assistant to the president and senior presidential speechwriter. His duties included writing jokes for the short comedy routine Obama performed annually at the White House Correspondents' Association Dinners.

Litt says a lot of those jokes worked because they were coming from the president. "As I retell them, I often am reminded of this, because people give me a look like, 'Really? That was funny?' And I'm like, 'Yeah, you have to hear the president tell it.' "

Other speeches led to unintentional political controversy. When Litt wrote Obama a Thanksgiving address that neglected to mention God, conservative media criticized the president for the omission. The blowback taught Litt a valuable lesson. "Your job as a speechwriter is not just to write good speeches," he says. "Your job is to keep in the back of your mind the fact that there's a whole industry of people trying to take your words out of context — and that's politics." 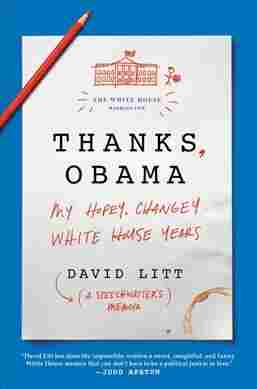 On meeting Obama for the first time

I remember the first time I met the president. He asked me a question — "How's it going?" — and I literally blacked out. I don't know what I said to him, because I was so afraid to meet this person who had had such an impact on my life already — and also, by the way, was the president of the United States.. .. I had exactly one thought in that moment which was, "I did not realize we were going to have to answer questions." ...

I think that ability to function normally [while] under intense pressure, that's actually the hardest part of a White House job. It's not being brilliant all the time. It's being competent, even though there's all these incredibly difficult, high-stakes things happening around you.

It's not like there was a memo written, but there was just a sense of who the president is and what he would feel comfortable with. The jokes were always trying to make sure that we were getting at some truth that was important, and also if we were kind of targeting someone with a joke, that it was someone who deserved it and [told] in a way that they deserved it.

I mean, every year we would get pitched jokes, and this was totally fine. It's everyone's job to pitch everything that they think of. But you'd get jokes making fun of, let's say Chris Christie's size, and we never would use that in a speech because that's not the thing about Gov. Chris Christie that is worthy of mockery. ... We would make sure that it was about the political, not about the personal, [which] I think was important. I will say that President Obama was often the one pushing us. His words were, "Can we make this sharper? Can we make this edgier?"

I was not surprised that he didn't go, because I had watched him at the Al Smith Dinner, which is kind of the Correspondents' Dinner of the presidential campaign, and he got booed during that dinner — and it is more or less impossible to get booed during a dinner like that. I mean, politeness is kind of the core virtue of a society like the Al Smith Dinner, and he still managed to do it, so I think he understood that it wasn't going to go well if he came. He just does not have the ability to deliver the kind of jokes that presidents are supposed to, and that people appreciate from their presidents.

I was still disappointed that he didn't give it a shot and he didn't try to meet the standard that has been set. Not in terms of comedy, but just in terms of self-deprecation. In terms of acknowledging that you're only human. You may be the president of the United States, but you're also just a person and you have flaws and you make mistakes. And there's a way of using those jokes to acknowledge them through comedy, and I think that is an important democratic tradition in its own way. I wish that President Trump realized that and he was willing to participate in it. I'm sadly not surprised he was not.

When I think about Trump's speeches, I honestly wish that my biggest concern was the rhetoric or the words that he's using. And it's impossible to get past the thoughts that he's conveying and the argument that he's making.

The line [in the inaugural address] ... about "American carnage" is a perfect example. It seems to me that that's a departure from all previous presidents who have tried to be optimistic, who have tried to say, "This is the best of what America can be." And Donald Trump, because of his style as a candidate, he needs you to believe that America is falling apart because his argument is, "I alone can fix it."

And so at every moment he is saying these things that are not at all in keeping [with] what we would think of as presidential — they're trying to make America seem worse than it actually is, rather than make us realize that America could be better than it's ever been before. And so it's not a speechwriting concern, it's not a matter of rhetoric — it's a matter of what this person is trying to express. And I find it disturbing as a speechwriter, but even more disturbing as an American.

On leaving the Obama White House in 2016 because of burnout

It was sad. It was bittersweet knowing I somehow was in a position where I got to regularly interact with the president of the United States and that wasn't going to happen again.

But it also seemed so surreal and so much luckier than I ever could've imagined that I got to do that at all, that I didn't find myself saying, "Oh I have to do this another two or three times." It was like winning the lottery. It was this moment of saying, "I got unbelievably lucky and I'm just going to enjoy that." ...

I miss being a part of something that's so big, and I miss helping people — not the president, but Americans. I miss highlighting their stories and bringing them to national attention. That was a special thing.