Accessibility links
How Every NFL Team Responded To Trump's National Anthem Protest Comments After the president said those who kneel during the anthem should be fired, protests rippled throughout the NFL this week. Teams mostly stood by their players. 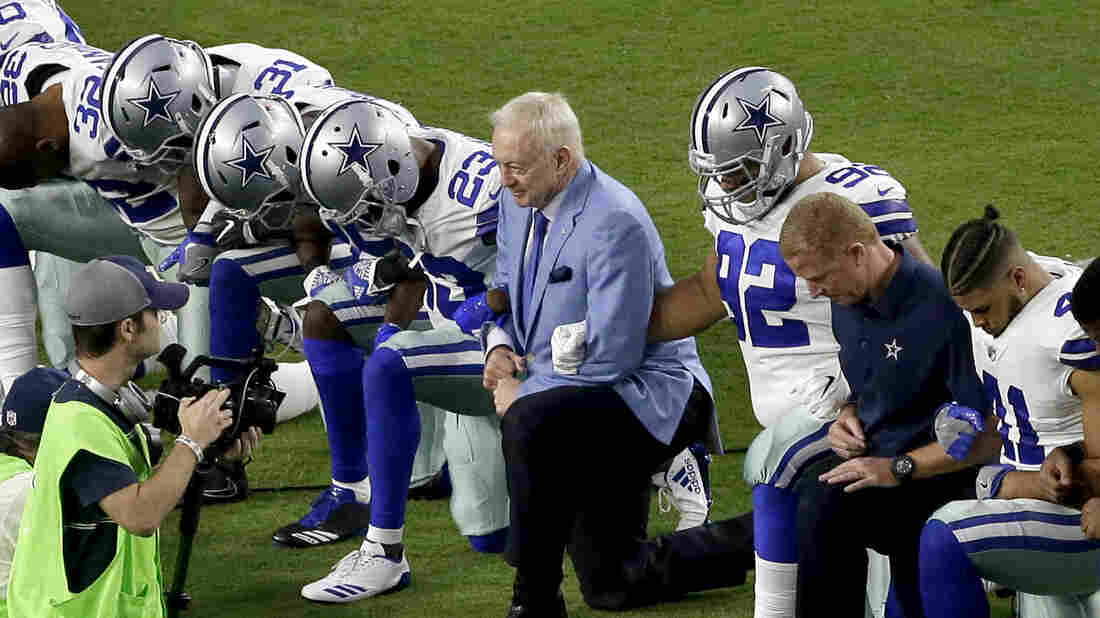 The Dallas Cowboys, led by owner Jerry Jones (center), take a knee before the national anthem Monday night in Glendale, Ariz., ahead of the team's game against the Arizona Cardinals. Matt York/AP hide caption 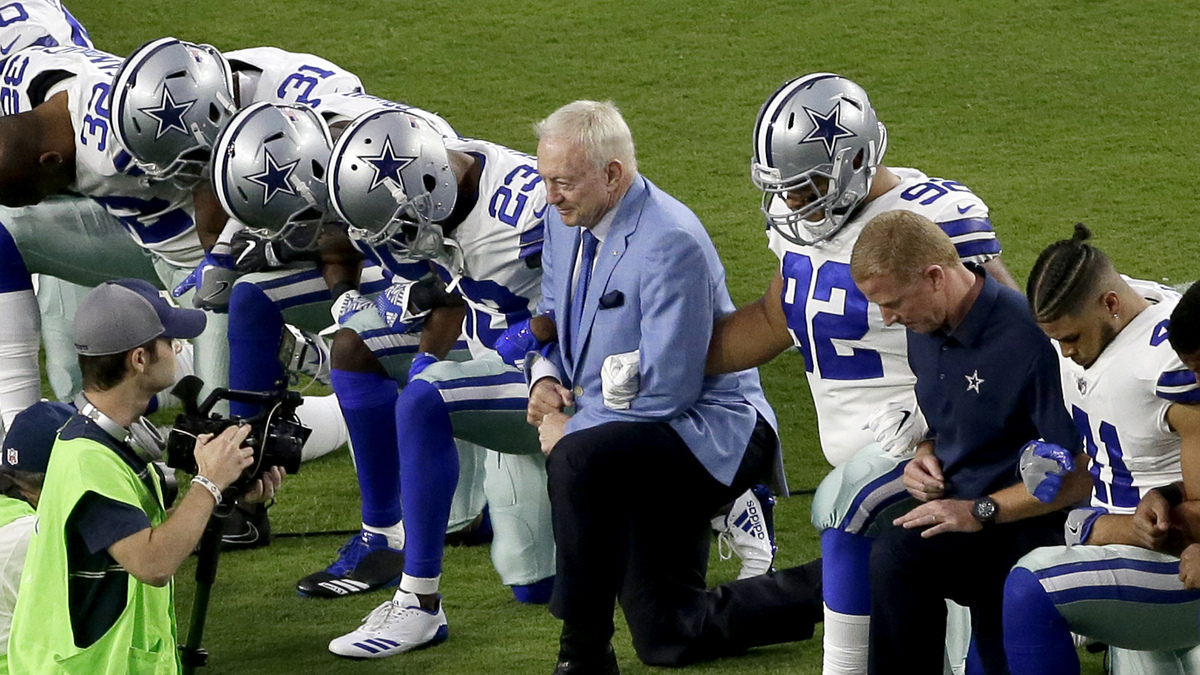 The Dallas Cowboys, led by owner Jerry Jones (center), take a knee before the national anthem Monday night in Glendale, Ariz., ahead of the team's game against the Arizona Cardinals.

At a rally in Alabama on Friday night, President Trump expressed his opinion that NFL players who kneel or otherwise take part in protests during the national anthem prior to games should be fired. The president doubled down on those comments over the weekend, tweeting that players "should not be allowed to disrespect our Great American Flag (or Country)."

Last year, NFL quarterback Colin Kaepernick began kneeling during the national anthem to protest racial inequality. Over the course of the season, other players joined his protest by kneeling, sitting or raising their fists during the anthem.

Kaepernick is not currently employed by any NFL team and has not spoken publicly about his movement in several months. However, other players have continued to protest during the anthem, and Trump's statements led to widespread protests over the weekend. Most teams stood by their players' decision to protest. Here's how the league, individual teams and a few other sports have weighed in:

The National Football League and its Players' Association both issued statements supporting their players' rights after Trump's comments on Friday.

NFL Commissioner Roger Goodell called Trump's remarks "divisive" and said they fail to understand "the overwhelming force for good our clubs and players represent in our communities."

In his statement, NFLPA Executive Director DeMaurice Smith expressed support for the rights of the league's players and said "no man or woman should ever have to choose a job that forces them to surrender their rights."

NFLPA President Eric Winston called Trump's comments "a slap in the face to the civil rights heroes of the past and present" and said "we will not stop challenging others on how we can all come together to continue to make America the greatest country on earth."

Many of the league's players and teams also issued statements or participated in protests prior to this weekend's games:

Team President Michael Bidwill issued a statement supporting his players and describing football as "something that has always united us as Americans." On whether the team would protest before its game Monday night, defensive tackle Frostee Rucker said "if there is anything like that, it's going to be unified."

ESPN sideline reporter Lisa Salters said that ahead of their Monday Night Football game, the Cardinals had sought to do something jointly with their opponent, the Dallas Cowboys, but were turned down by the team, which made its own gesture. Cardinals players and personnel lined up and locked arms along the front of one end zone. Trump tweeted on Sunday that he thought standing together and locking arms was fine.

Two players knelt Sunday, and the team linked arms during the national anthem. Team owner Arthur Blank joined the team on the sidelines and issued a statement on Saturday saying "we are at our very best when we are working together":

Playing in England, about 10 players knelt for "The Star-Spangled Banner," according to the Baltimore Sun. Other players and coaches linked arms. Before the game, owner Steve Bisciotti issued this statement:

Defensive end Julius Peppers remained in the locker room for the anthem, while the rest of the team stood. The team has yet to issue any statement regarding Trump's comments or protests around the league.

All Bengals players stood and most locked arms for the anthem. The team later issued a statement, saying "Football and politics don't mix easily. Fans come to NFL games to watch great competition on the playing field and that's where our focus should be."

Tight end Tyler Eifert, who is injured and did not make the trip to Green Bay for their game, had previously spoken to the Cincinnati Enquirer and written a statement on Medium about why he makes a point of standing for the anthem.

At least 20 players knelt, while others stood and linked arms during the anthem, and owners Jimmy and Dee Haslam called Trump's comments "misguided, uninformed and divisive" in a statement supporting their players. Before an earlier game this season, the team played a video in which players discussed racial inequality.

The Fort Worth Star-Telegram reported that Cowboys players planned to protest during the anthem before Monday night's game, but they instead chose to lock arms, taking a symbolic knee together just before the anthem. Fans at the game in Phoenix booed the visiting team's demonstration.

Owner Jerry Jones, who knelt with his players and personnel, has previously said he feels "so strongly" about recognizing the flag; he has not issued any statement regarding Trump's comments or protests around the league.

At least 32 players protested by kneeling or raising a fist during the anthem. On Saturday, team President and CEO Joe Ellis released a statement supporting his players. Defensive end Derek Wolfe did not participate in the protest and made the following statement to ESPN's Josina Anderson:

NEW: Statement to me from #Broncos DE Derek Wolfe on Donald Trump's comments regarding national anthem protests in the @NFL. pic.twitter.com/4qWLXNhbSK

Lions owner Martha Ford and head coach Jim Caldwell locked arms with their players during the anthem. Eight players knelt. Singer Rico Lavelle dropped to one knee and raised his fist as he sang the final word of the anthem:

Ford also issued a statement about football's "platform for dialogue and positive change."

Three Packers knelt, while most others stood and locked arms for the anthem. On Saturday, Packers President Mark Murphy issued a statement against Trump's comments, calling them "divisive and offensive."

Players and coaches stood and locked arms during the anthem. Texans founder and CEO Robert McNair released this statement on Sunday morning:

Several players knelt for the anthem, and those who stood locked arms. Owner Jim Irsay issued the following statement on Saturday:

In London, team owner Shahid Khan locked arms with his players and coaches on the sidelines, and more than a dozen Jaguars knelt for "The Star-Spangled Banner." Afterward, Khan issued the following statement saying it was a "privilege" to stand on the sidelines with his team:

Several players knelt or sat on the bench for the national anthem. Before the game, owner Clark Hunt issued this statement:

Most Chargers locked arms during the anthem, and some sat down. Owner Dean Spanos released the following statement:

The Rams played on Thursday night, before Trump's comments. At that game, linebacker Robert Quinn raised his fist during the anthem, as he has throughout the season. On Sunday morning, Rams owner Stan Kroenke issued a statement supporting his players' freedom to protest.

Most of the team, including owner Stephen Ross, stood and locked arms for the anthem. Several players knelt, and some wore T-shirts supporting Kaepernick during pregame warmups. Ross issued the following statement on Saturday:

The Vikings stood and locked arms during the anthem on Sunday. Team ownership released a statement supporting their players and coaches' "constitutional right to respectfully and peacefully express their beliefs."

Seventeen players knelt for the anthem, while others linked arms. In a statement Sunday morning, owner Robert Kraft said he was "deeply disappointed" by Trump's comments:

At least 10 players sat on the bench for the anthem. Quarterback Drew Brees said after the game that he did not agree with either Trump's comments or his teammates' decision to sit for the anthem. The Saints issued a joint statement with the NBA's New Orleans Pelicans on Sunday morning:

Three Giants knelt for the anthem, while the rest of the team stood and joined arms. After the game, the team released this statement:

Giants statement after 3 of their players kneeled during the national anthem: pic.twitter.com/nNd4NuXw4t

A majority of the team knelt or remained seated during the anthem. In a statement to ESPN, Raiders owner Mark Davis said, "I could no longer ask our team to not say something while they are in a Raider uniform. The only thing I can ask them to do is do it with class."

Alejandro Villanueva, who stood alone during the National Anthem, now says he regrets his actions. pic.twitter.com/yXolZdp2tW

The Steelers remained in the locker room for the national anthem, with the exception of Alejandro Villanueva, who stood just outside the tunnel. Villanueva is an Army veteran who served in Afghanistan; he says he has been rethinking his decision.

Team President Art Rooney released a short statement after the game supporting his players. In an earlier statement, Rooney said, "I believe the Commissioner made an appropriate statement, and I have nothing to add at this time."

The 49ers played on Thursday night, before Trump's comments. Safety Eric Reid, who consistently knelt with Kaepernick last year, was the only 49er to protest the anthem on Thursday. On Saturday, team CEO Jed York tweeted the following statement:

The Seahawks remained in their locker room for the national anthem and released a statement through the team's PR account before the game:

Two players knelt with their hands over their hearts while many of their teammates joined arms. Co-chairman Joel Glazer issued a statement on Sunday pledging to recognize "every individual's constitutional right to freedom of speech."

The Titans remained in their locker room for the anthem and later issued a statement about their decision, while singer Meghan Linsey knelt after performing "The Star-Spangled Banner." Earlier, owner Amy Adams Strunk released a statement supporting her players and Goodell. 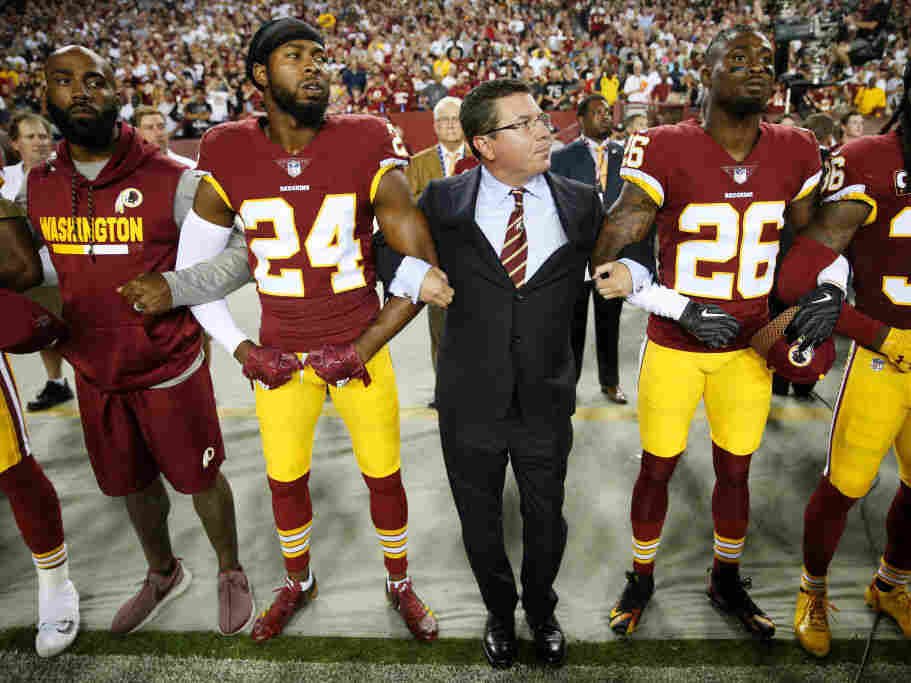 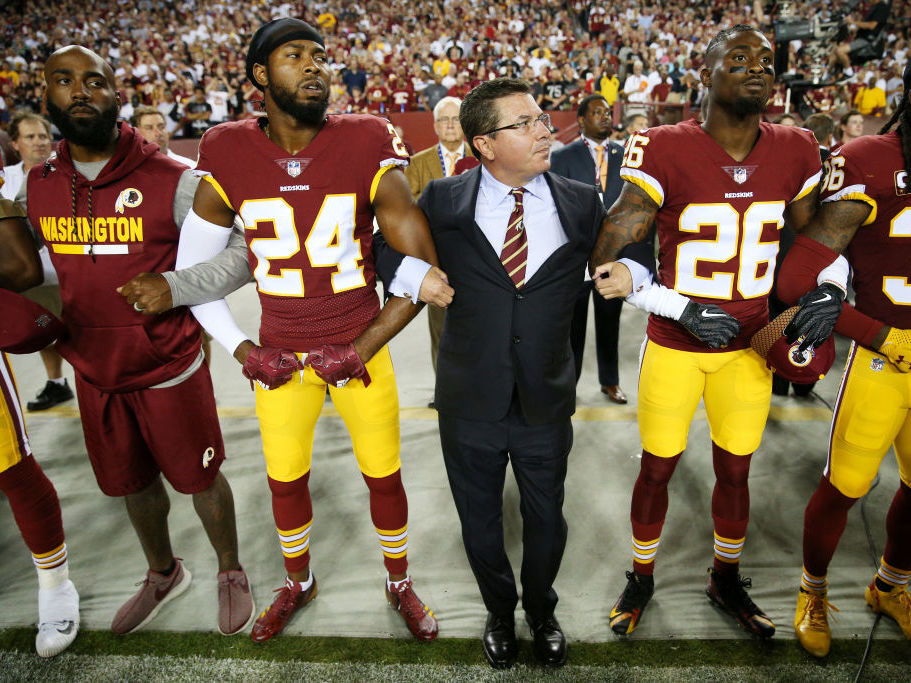 Washington Redskins Owner Daniel Synder stands with players during the national anthem before Sunday night's game against the Oakland Raiders.

Owner Dan Snyder locked arms with his players during the anthem, and some players took a knee. The team issued the following statement before the game:

A statement from the Washington Redskins. pic.twitter.com/GsCMfWTZ7T

Players from other professional sports leagues also participated in protests before their games on Sunday:

Before the WNBA finals began on Sunday, the Minnesota Lynx joined arms on the court, while the Los Angeles Sparks returned to their locker room during the anthem.

Nine players stayed in the locker room for the national anthem before a NWSL game on Sunday, including Megan Rapinoe, who has previously knelt during the anthem.