Accessibility links
Co-Working Spaces Are Redefining What It Means To Go To The Office Part of the appeal of spaces like WeWork is flexibility; monthly membership means avoiding the commitment of a long-term lease. But the real value, the firms say, is a more innovative work culture. 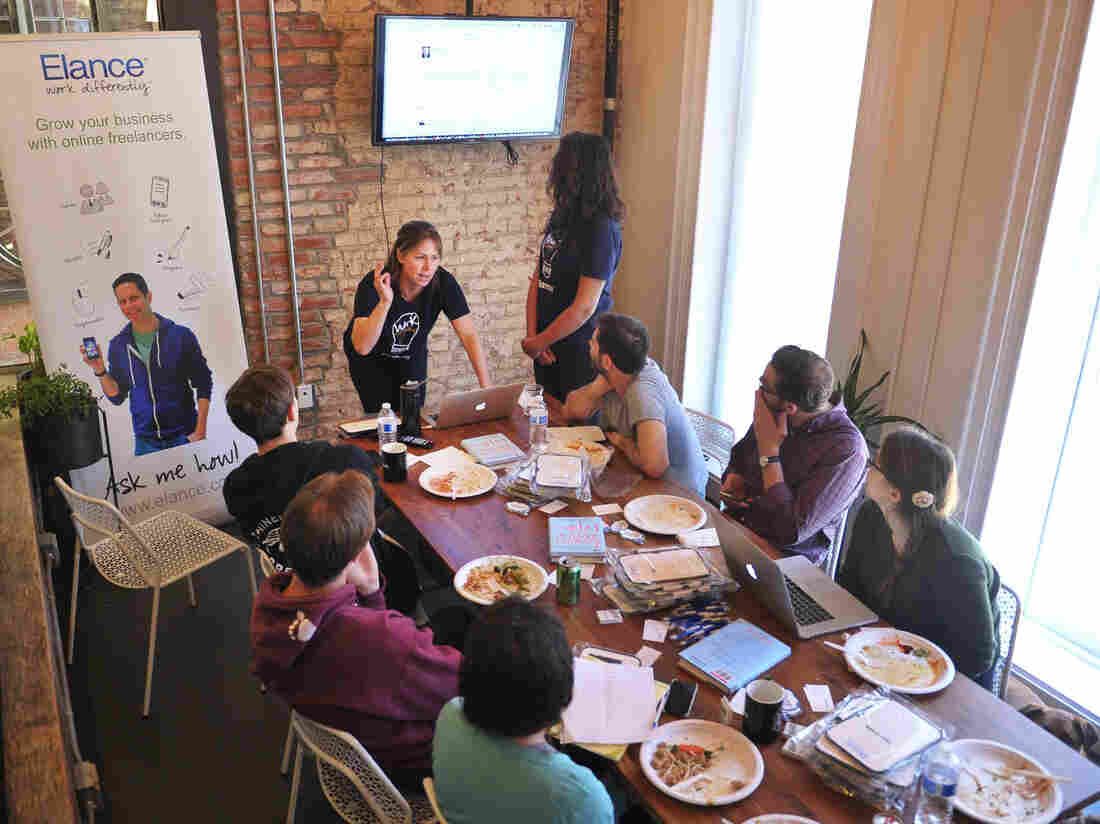 People gather around a speaker during a lunchtime seminar at a WeWork co-working space in Washington, D.C. Mandel Ngan/AFP/Getty Images hide caption 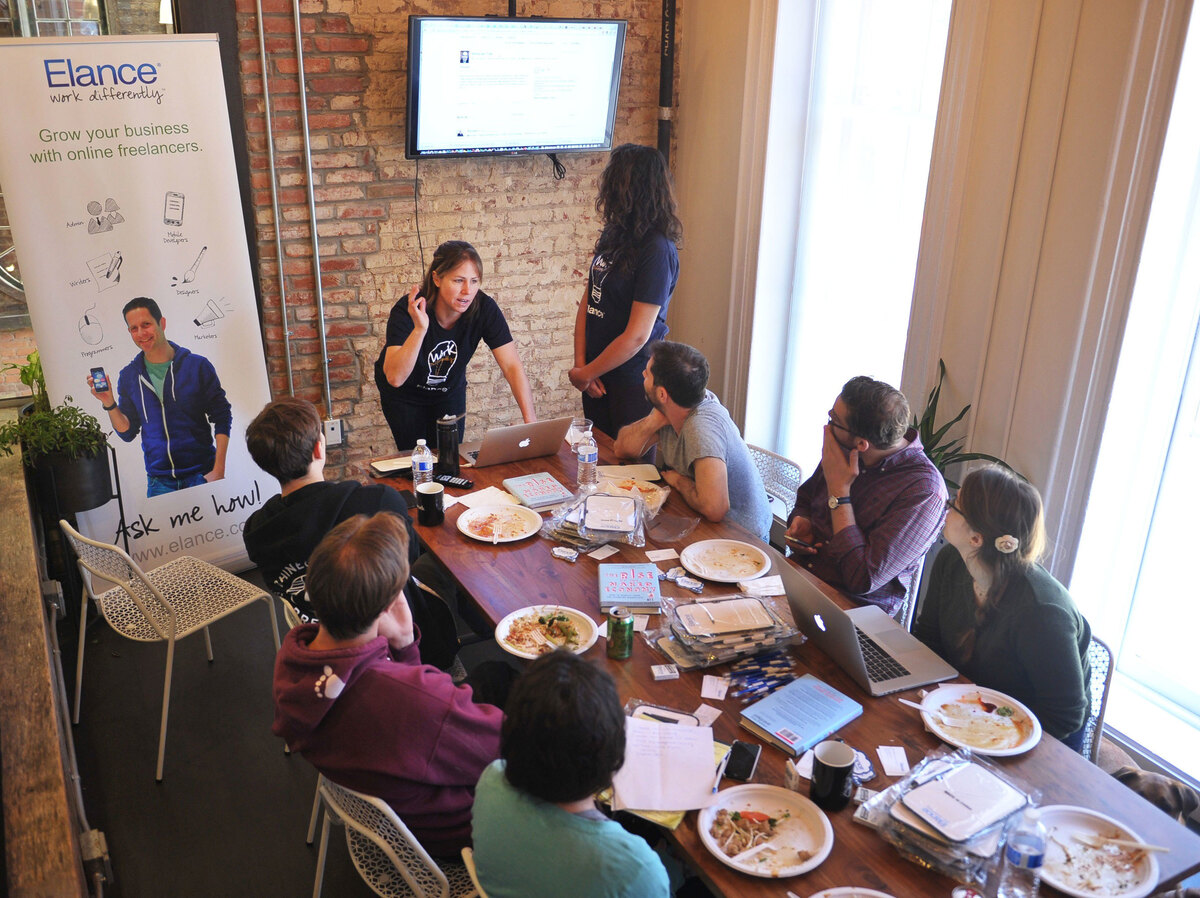 People gather around a speaker during a lunchtime seminar at a WeWork co-working space in Washington, D.C.

Michael Silvers has worked at home and in corporate offices but prefers his small, rented glass-walled shared working space in downtown Washington, D.C.

"Every office that I've worked in, you're kind of down in your own little hole, and you don't really interact as much with other types of businesses," he says.

Not so at his WeWork office, a co-working space that has led to serendipitous meetings for Silvers and his co-founder, who run ClearCodeX, an app-development firm. They recruited a business partner, another WeWork entrepreneur, and learned a far more efficient way to develop software from other startups there.

Silvers says they were able to save a lot of time on a recent project. "From concept design through to a working app in the App Store in four weeks," he says. "It was just amazing. We saw how fast you can do development because of what we caught up on here at WeWork and seeing other people do it."

Co-working is a bit like home- or ride-sharing, but with office space. The concept has grown beyond its beginnings as communities of entrepreneurs working alongside each other, sharing desks, coffee machines and, in many cases, ideas, to become an industry onto itself.

WeWork, the largest player, started in 2008 and has since built out 221 offices globally. It has garnered private investment including a recent $4.4 billion infusion from SoftBank, run by Japanese megainvestor Masayoshi Son, giving WeWork an estimated market valuation of as much as $20 billion.

In addition, there are niche and regional players, as well as legacy office-space firms like Regus, which has launched its version of co-working facilities it calls Spaces.

Co-working spaces are like hybrid environments — walk into one, and you'll find desks, monitors and meeting rooms along with the creature comforts of home. There are convivial, open spaces and areas to allow silent retreat into more focused, productive work. 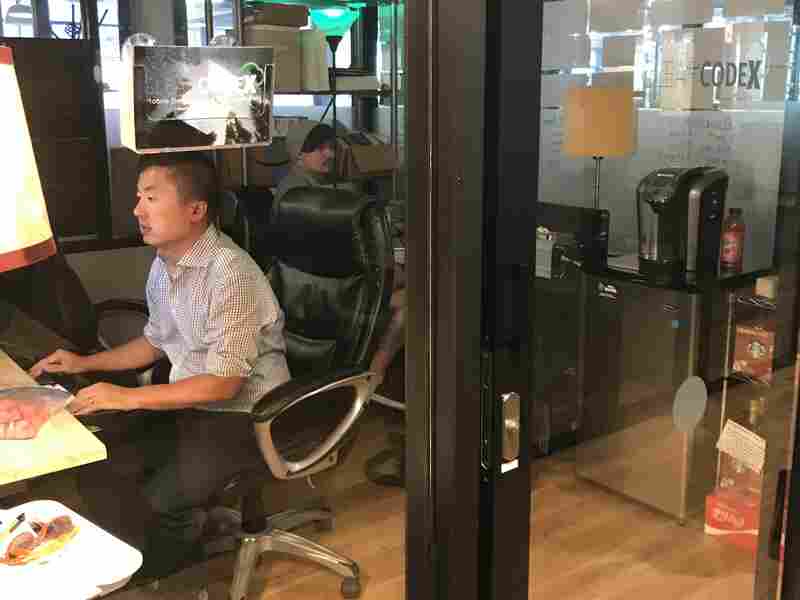 Tan Ly works in a WeWork space in downtown Washington, D.C. WeWork is among several companies that offer workspaces around the world. Yuki Noguchi/NPR hide caption 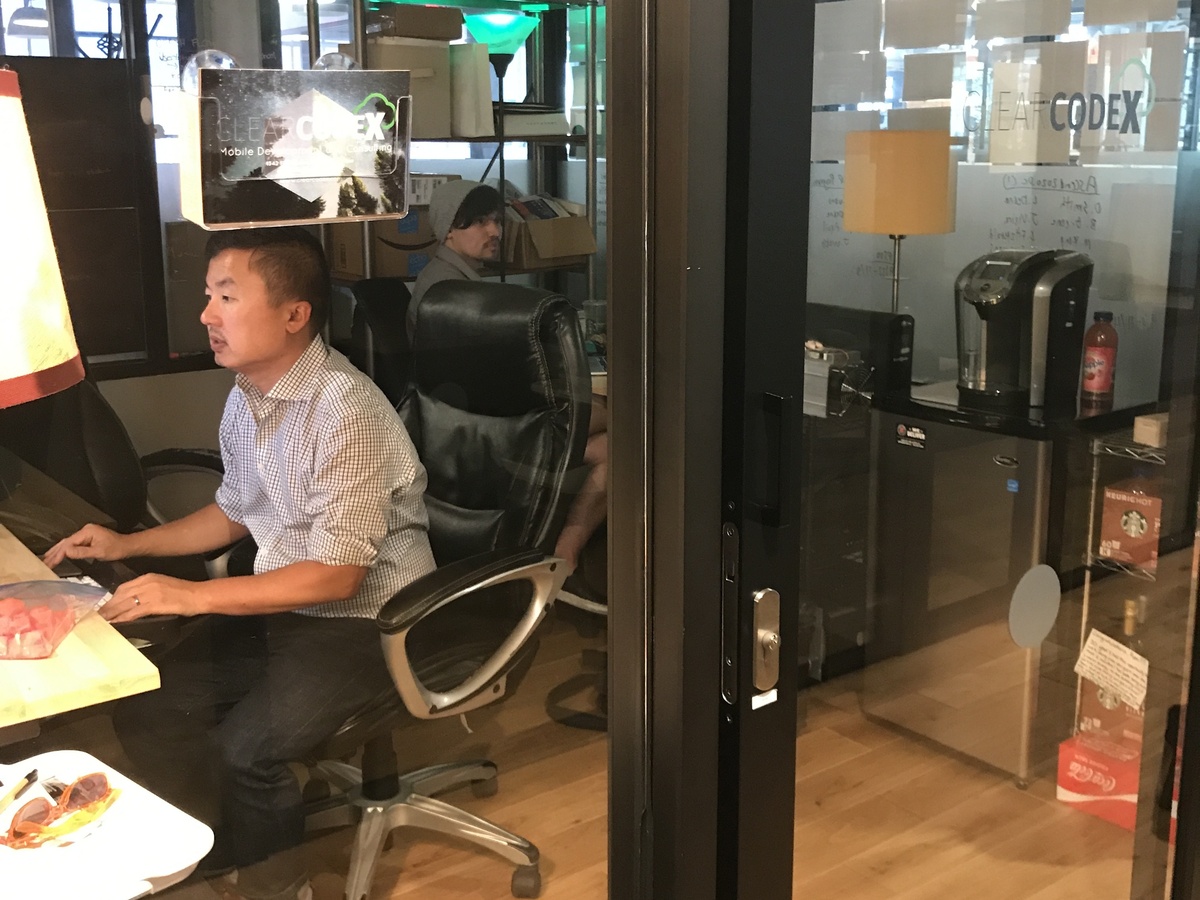 Tan Ly works in a WeWork space in downtown Washington, D.C. WeWork is among several companies that offer workspaces around the world.

Working in such close quarters brings with it some privacy challenges. Some workers say they've had to learn to shut down their monitors or turn their screens away from each other.

Part of the appeal is flexibility; monthly membership means avoiding the commitment of a long-term lease, and the hassle of stocking printer ink, for example. Road warriors can use memberships at multiple locations. But the real value, co-working companies say, is a more innovative work culture.

David Fano, chief growth officer for WeWork, says the biggest demand comes from large corporations that are trying to get the most out of workers by keeping them productive and happy. And that starts with the space they work in, he says.

"We're doing a lot of things with workplace mindfulness, thinking about the kinds of food and beverages that are in the work environment, and being just as thoughtful about that as we are with ergonomics and furniture," he says.

As important, Fano says, is what WeWork has learned about how people work and the technology tools they need.

There are several factors driving the demand for co-working. Telework keeps growing, and independent workers — contractors, freelancers and the like — make up a bigger part of the labor force.

Many younger workers like working in places that blend the home and the office, and the personal and professional. (WeWork is even looking to extend into living spaces, with pilot WeLive locations.)

Gretchen Spreitzer, a management professor at the University of Michigan, says there haven't been studies quantifying the effect of co-working spaces on productivity. But, she says, "qualitative research does show that people feel like they're more productive in the company of others that they trust, rather than just sitting in a coffee shop."

But the explosive growth of co-working has created its own cannibalization. Spreitzer says there are so many WeWork and WeWork-like spaces, the companies are under pressure to keep their members renewing, month after month. It's not easy, she says, to keep a leg up.

"We're seeing today turnover of members in spaces as competitors come up with cooler spaces or other amenities," Spreitzer says.

"There are a lot of organizations that own real estate that could probably offer somewhat of a me-too model," including hotels, he says.

Still, he says, co-working is here to stay.