Accessibility links
Trump's Brand Is On The Line In Alabama Senate Race Polls still show Sen. Luther Strange trailing Judge Roy Moore, with Trump unable to pull the appointed senator to a win. Trump allies say Moore is the true candidate who can "drain the swamp."

Trump's Brand Is On The Line In Alabama Senate Race

Trump's Brand Is On The Line In Alabama Senate Race 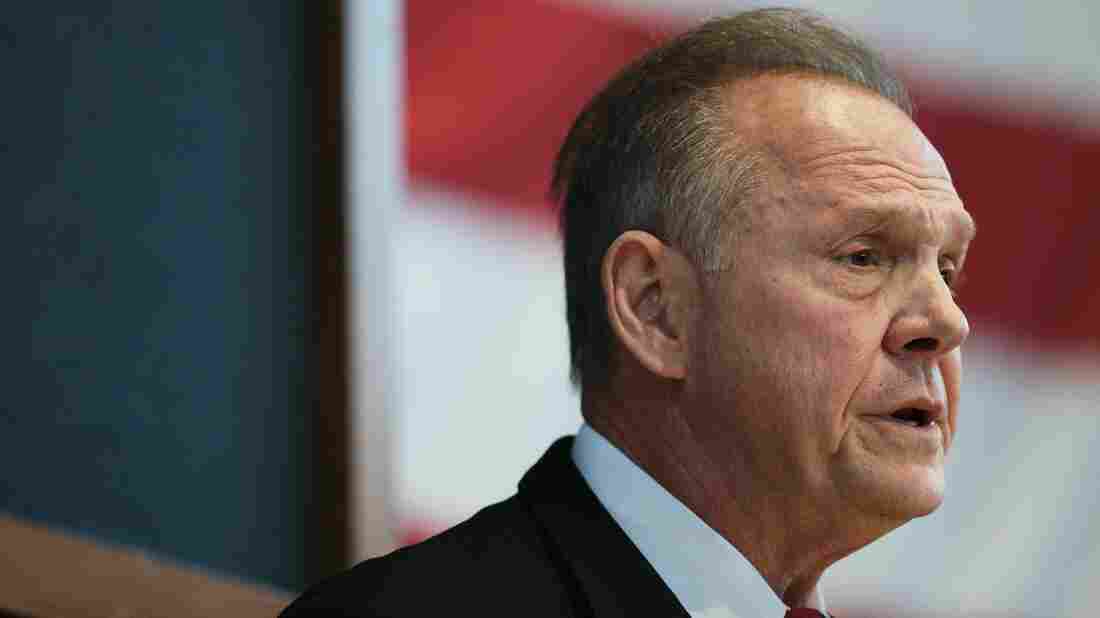 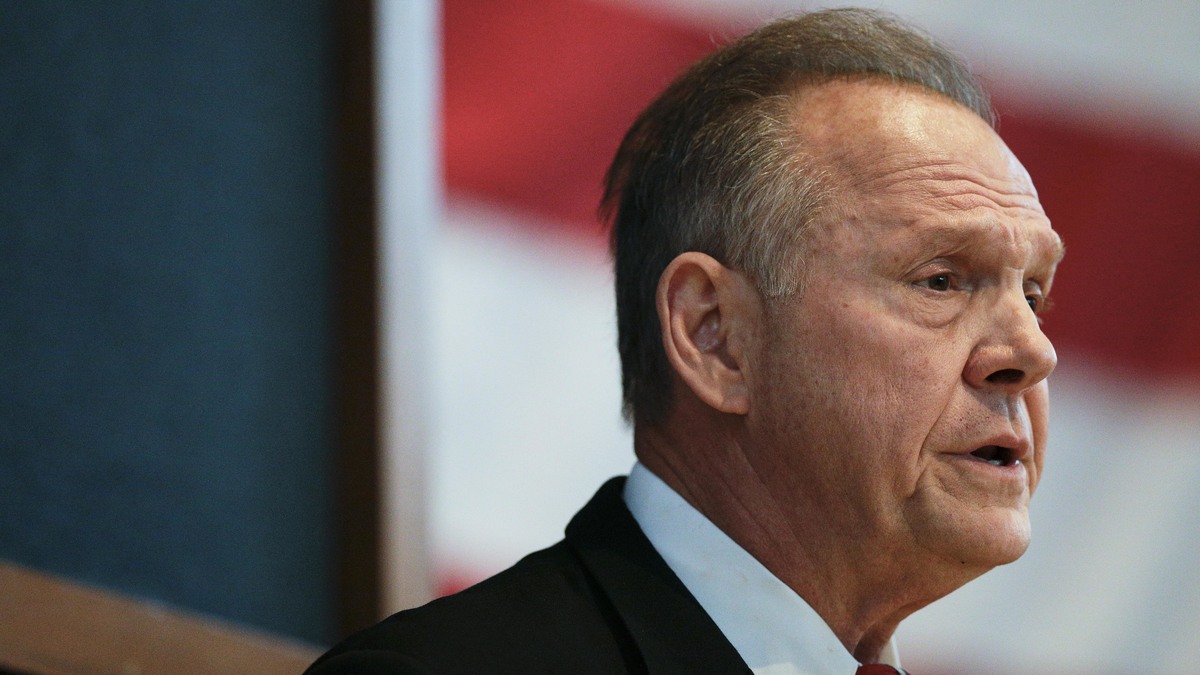 His preferred candidate is Luther Strange, the incumbent senator who has consistently trailed in the polls to firebrand conservative Roy Moore, a former state Supreme Court justice.

Trump was just in Alabama stumping for Strange on Friday, where he landed himself in controversy, calling for the firing of NFL players who don't stand for the national anthem.

If Strange were to lose in a state where Trump has an approval rating in the low 80s, it could embolden a wing of conservative activists who have endorsed Moore, from former Alaska Gov. Sarah Palin to former White House chief strategist Steve Bannon.

But if Strange were to pull off the win, it would show that Trump's brand still eclipses anyone else in the conservative movement.

The seat was vacated by now-Attorney General Jeff Sessions.

Trump has taken sides with Senate Majority Leader Mitch McConnell in this fight, endorsing a candidate thought to be more palatable to a broader GOP base. On the other side is a man who arguably is more like Trump. A Moore win could foreshadow further upsets against Republican establishment picks, which Trump and others argue potentially gives a clearer path to victory for Democrats in some races.

"Big Luther's been making a big difference in Washington, D.C., and he's just getting started," Pence said. "And when you look at what President Trump has accomplished, you'll see Sen. Strange has been there every step of the way."

But in many ways, the Trump base aligns more naturally with Moore. He's a well known conservative culture warrior who rose to national prominence when he refused to take down a Ten Commandments monument in front of a state judicial building in 2003.

More recently, he tried to stop the U.S. Supreme Court's decision legalizing same-sex marriage from taking effect in the state; he was suspended and eventually resigned.

Both of those decisions ultimately cost him his place on the bench, but it helped him bolster a reputation that he was unafraid to take on national powers, especially on issues that go against his conservative Christian values that are central to many core Alabama GOP voters.

And with the way the president has seized on the culture wars — including his off-message diatribe at Friday's rally about NFL players disrespecting the American flag in order to protest racial injustices — it's Moore who is more of a natural fit for much of Trump's base. 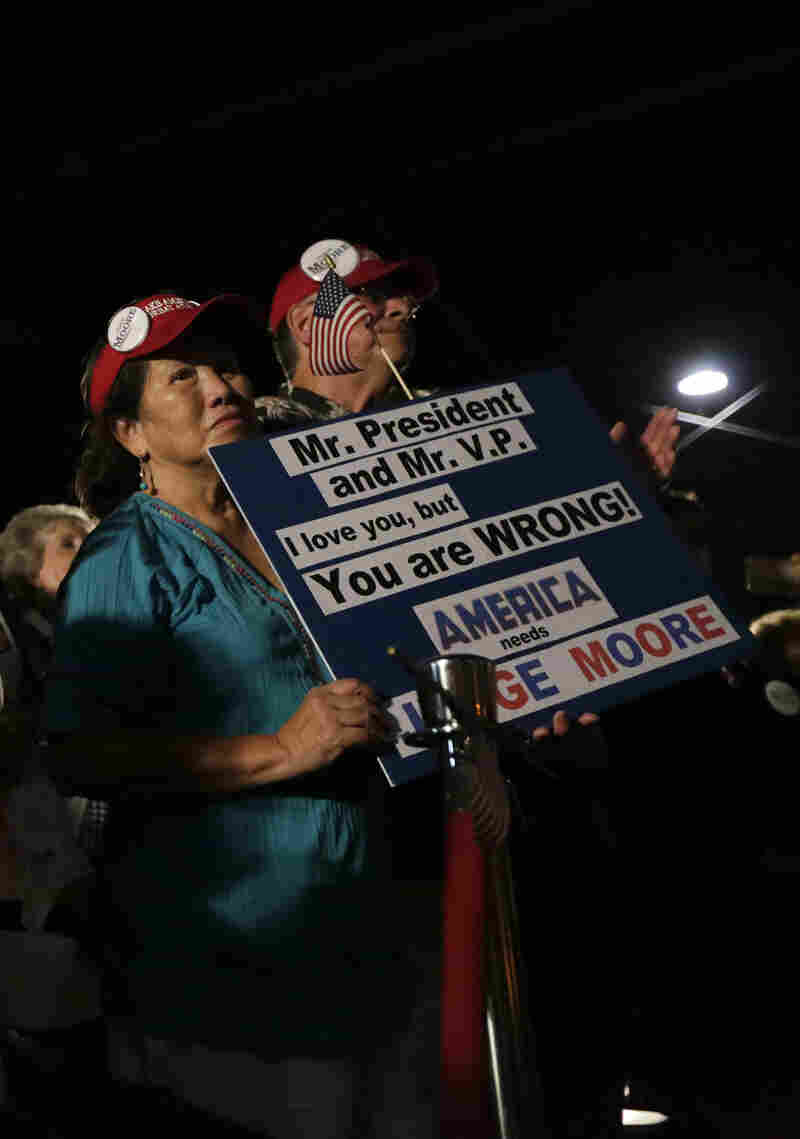 "They just believe Moore is his own man, and that's what they liked about Trump," said Alabama GOP pollster Brent Buchanan.

Virtually all of the people who helped catapult Trump to the White House have lined up behind Moore — Bannon, former national security aide Sebastian Gorka, Fox News host Sean Hannity, radio host Laura Ingraham and even his own Secretary of Housing and Urban Development Ben Carson.

After appearing at a rally for Moore on Monday night, alongside Duck Dynasty star Phil Robertson and Britain's Brexit leader Nigel Farage, Bannon went on Fox News Channel's Hannity and said the reason he and other "hard-core Trump supporters" were all lining up behind Moore over Strange was to protect the president and the vision he set out during the 2016 campaign.

"I think Roy Moore is the guy that's going to support Donald Trump and fight the establishment," Bannon said, calling the race a referendum on the "party of the elites" and a test of whether the "muscle of the grass roots" can triumph again.

GOP strategists in D.C. worry that a Moore victory on Tuesday could trigger the kind of all-out intraparty war Bannon has been gunning for since he left the White House, hoping to knock off other incumbent Republicans he sees as too close to the GOP establishment and not supportive enough of Trump. Now, to do that, Bannon just needs to knock off Trump's own candidate.

"When you send Judge Moore to D.C., he is going to be an inspiration for the rest of the country for other candidates across the country to rise up and take on their own swamp creatures in their own states," Palin predicted at a rally for Moore last Thursday. 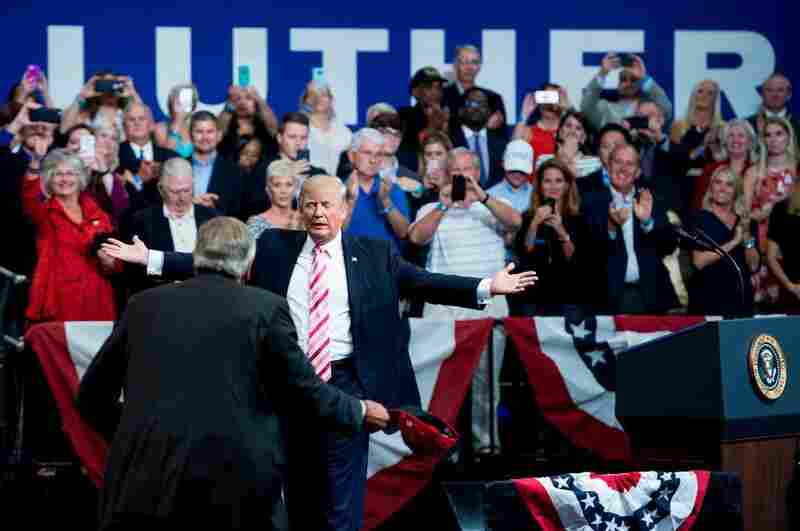 "Mr. President and Mr. V.P. — I love you but you are WRONG!" read one sign being held up at that event.

There are several reasons Strange has been hamstrung as the candidate of the establishment, despite his blessing by Trump. A superPAC allied with McConnell has spent $9 million hammering Moore, hoping to stop the kind of primary challenge floodgates Palin warned of from happening after a Moore victory.

And then there's the matter of how Strange came to the office in the first place. As state attorney general, Strange's office was supposed to be investigating then-Gov. Robert Bentley for allegedly using his office to cover up an affair with one of his aides. Soon after appointing Strange, Bentley resigned and took a plea deal.

Local observers say that, more than anything, has turned people off to Strange and pushed them toward Moore.

"Moore is a darling of conservatives, and I think that there's still a bit of a hangover for Luther on the questions about how he got there that have not really been satisfied in the public's mind," said David Mowery, an Alabama political strategist who's worked for both Republicans and Democrats.

Trump has tried to give Strange cover for both of those criticisms.

"As you know, Mitch is not, polling-wise, the most popular guy in this country," Trump said Monday while calling in to the Alabama talk radio program The Rick and Bubba Show. "They like to label [Strange] because he happened to be there for a number of months in the Senate, so they like to label him as Mitch's best friend, but he's not. He hardly even knows him. He'll be fighting Mitch."

And at his rally on Friday, Trump claimed that if Strange hadn't been appointed to the position, he'd be far ahead in the race.

Trump has also hammered home the same argument establishment Republicans have been privately making for months — if Moore is the nominee, the race for the Senate seat needlessly becomes competitive. It's the same fear they have if incumbents like Sens. Jeff Flake, R-Ariz., and Dean Heller, R-Nev., are knocked off by Moore-backed primary challengers.

"Ray's going to have a hard time," Trump said Monday on the same radio program, mangling Moore's first name, and predicting Democrats would pour in $30 million to boost their nominee, Democrat Doug Jones.

"If [Luther] wins, that race is over," Trump told the crowd on Friday. "If somebody else wins, I will tell you, that's gonna be a very tough race."

In an interview with the Washington Examiner, Strange said Moore could end up being another Todd Akin, referring to the 2012 Missouri GOP Senate nominee whose comments about "legitimate rape" and abortion cost Republicans a winnable race and spilled out into other contests.

"There are a lot of people that think my opponent would be a Todd Akin, an anchor around the neck of the party for the next couple years. I have to say, knowing him, that's probably a valid concern — it really is," Strange told the paper.

Moore has a history of controversial statements that could even end up pushing some moderate Republicans to vote for the Democrat Jones, a former U.S. attorney who prosecuted bombers of a Birmingham church during the civil rights movement.

At a rally on Sept. 17, Moore talked about division between "blacks and whites fighting, reds and yellows fighting, Democrats and Republicans fighting, men and women fighting." The term "reds and yellows" is widely seen as a racial slur, but Moore said he was simply referring to the Christian song "Jesus Loves The Little Children."

As recently as last December, Moore has questioned whether former President Barack Obama was born in the U.S. — a question that Trump also stoked while fanning the "birtherism" flames before he ran for president.

In the past, Moore has also said "homosexual conduct" should be illegal, and compared it to bestiality.

Strange allies were banking on Trump's 11th-hour appearance to be the deciding factor, but weekend polling indicates that Trump may not have swayed the necessary votes.

One survey from Buchanan's firm, Cygnal, found Moore still had an 11 point edge over Strange even after Trump's rally. Thirty-one percent said Trump's endorsement pushed them toward Strange, but virtually the same number (29.5 percent) said it pushed them to Moore; just over 37 percent said it had no effect on their choice. Several other polls conducted at least partly over the weekend and released on Monday also gave Moore a double-digit edge.

Numbers like that may be why Trump has expressed some hesitation in going all-in for Strange.

"I'll be honest, I might have made a mistake," the president acknowledged at one point during his rally for the Alabama senator. He still claimed that Strange's poll numbers had climbed since he elected him.

But for someone like Trump, who hates nothing more than losing, next time he may not be as willing to go with McConnell's chosen candidate — and that could complicate the 2018 midterms even more.