Accessibility links
'Provenance': A Cozy Mystery Set In Ann Leckie's 'Ancillary' Universe In this standalone novel, Ann Leckie returns to the world of her award-winning Ancillary trilogy with a different mission — a cozy mystery about the theft of some politically sensitive antiques. 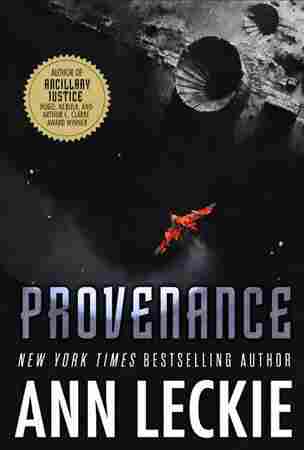 Somehow, it's not a surprise that Ann Leckie's Ancillary series has made room for a cozy mystery.

The original trilogy — about a former AI corpse-soldier who finds herself an accidental catalyst of a series of interplanetary breaking points — spanned a galaxy of planets and a few millennia of history. But it was much more concerned with the ways colonialism consumes everything from bodies to cultures, and how the many aesthetic trappings of the books' Radchaai Empire can't hide that the fact that the Empire is itself an act of violence.

Leckie reveled in those specifics, from the class issues surrounding the ritual wearing of gloves to the tiny social markers of Radchaai diplomacy. (Never underestimate the satisfaction of insulting your enemies by using the second-best tea service.) Expanding that world with cozy mysteries — which are always deeply concerned with the meaning of small things — just makes sense.

Enter Provenance, which lacks the Ancillary punch but lays out a gently convincing case for the cozy space mystery.

Ingray, anxious to impress her powerful politician mother, breaks a convicted felon out of prison to return to their shared home planet and hunt down some missing objects called vestiges — political antiques that carry immense social and political weight. But it's unclear even to Ingray what, exactly, that plan will involve — and soon enough, circumstances render any potential scheme moot. (Plan ahead all you want, but when the foreign dignitary staying in your house is murdered and another planet threatens war over it, you'll probably have to make some adjustments.)

Technically, Provenance is a standalone story, though it's firmly set in Leckie's Imperial Radch universe; if you haven't read the original trilogy, several references will likely pass you by. Ingray and her companions, arranged along a sliding scale between affable and cunning, quickly find themselves brushing elbows with dignitaries popping in from the larger Ancillary plot to stir the pot and raise the stakes.

At the center of those stakes are the vestiges themselves. Among the many familiar flourishes in this universe — every culture struggles politely with the gender norms of every other, the drinks never taste like they do at home, and food is never as unifying as anyone thinks it will be — is the idea of memory. For the Radchaai, memorial pins serve as both personal talismans and unspoken testaments of loyalty and political connection. On Ingray's planet Hwae, it's these vestiges that provide a family pedigree and a sense of witness; to own them is to claim connection to a given event. When the dozen plot threads begin to tangle (as they do in any good cozy mystery) with familial scheming and political tensions, the vestiges become the center of a debate about how we choose to remember history, and what it means when someone calls that into question.

It's a theme that fits neatly into the Ancillary universe without touching on the events of the trilogy too directly. That's just as well; the original books prove a hard act to follow, and on points of direct comparison, Provenance lacks some of the depth that made that series so engrossing. (Ingray and her friends are pleasant company, but do not possess the immediate power of Breq, whom we first met in Ancillary Justice staggering across an ice field, looking for a gun that could kill an empire.)

Still, Provenance provides a careful look at how no one's immune from politics, even if they think themselves outside the fray. Ingray's world-shaking events are mere footnotes in the larger scheme of things, but that merely changes the nature of her obligations, not removes them. This is a story about the necessity of exploring the edges of the known, which makes Provenance a fitting addition to the Ancillary world, and suggests an expanded universe with many such stories yet to be told.