Accessibility links
Republican Party, President Trump Unveil Tax Overhaul Plan After months of private negotiation, President Trump and GOP congressional leaders have revealed the outline of their tax plan. It calls for cuts in both individual and corporate tax rates. 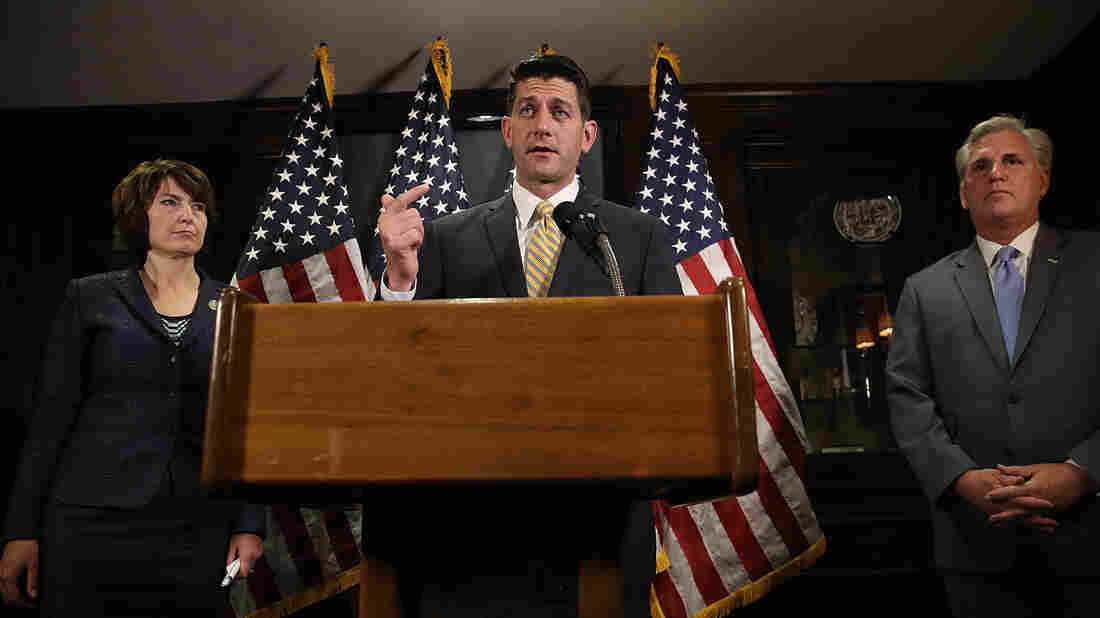 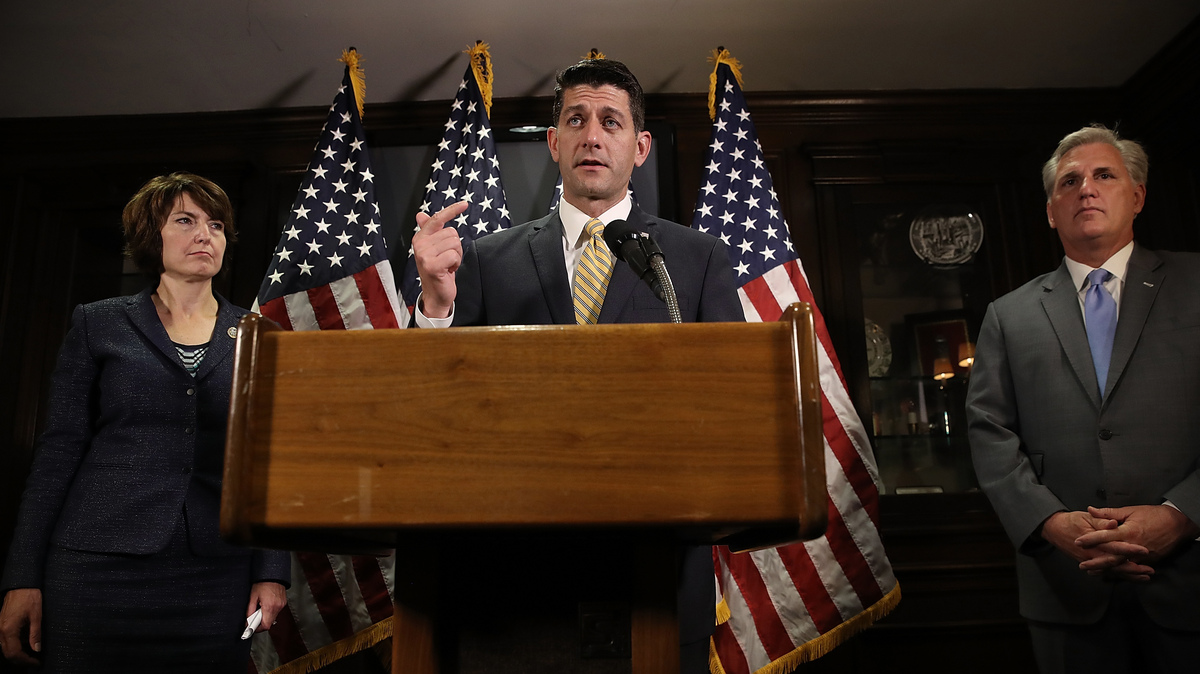 President Trump and GOP congressional leaders have outlined their plan for the most sweeping overhaul of the federal tax code in more than three decades.

They're proposing deep cuts in both individual and corporate tax rates, saying that will help supercharge a slow-growing economy.

While many of the details still have to be filled in, House and Senate GOP leaders have been meeting for months with the Treasury secretary and a top White House economic adviser to fashion a plan they can agree on.

"Today we are taking the next step to liberate Americans from our broken tax code," said House Speaker Paul Ryan, R-Wis. "This unified framework delivers a new tax code that is simple, that is fair, that is pro-growth and pro-family."

It would cut the top individual income tax rate from 39.6 percent to 35 percent and slash the corporate rate from 35 percent to 20 percent. The plan would also create a new, 25 percent rate for so-called pass-through businesses that are currently taxed at the individual rate.

The plan would end taxes on the profits that multinational companies earn outside the country and allow those companies to repatriate past profits at a discounted rate. In addition, for at least five years, the plan would allow companies to write off the cost of investments immediately, rather than deducting those costs over time as they do now.

Republican backers have framed the tax overhaul as a much needed boost for the middle class. It would nearly double the standard deduction, so fewer people would have to go through the trouble of filing an itemized return.

"The biggest winners will be the everyday American workers as jobs start pouring into our country, as companies start competing for American labor, and as wages start going up at levels that you haven't seen in many years," Trump said. 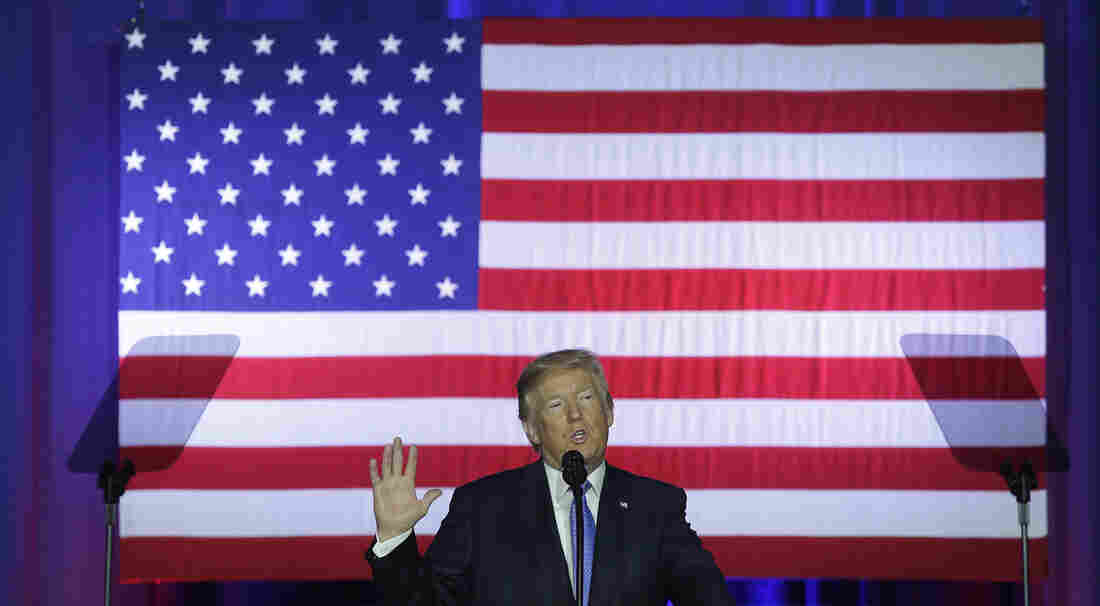 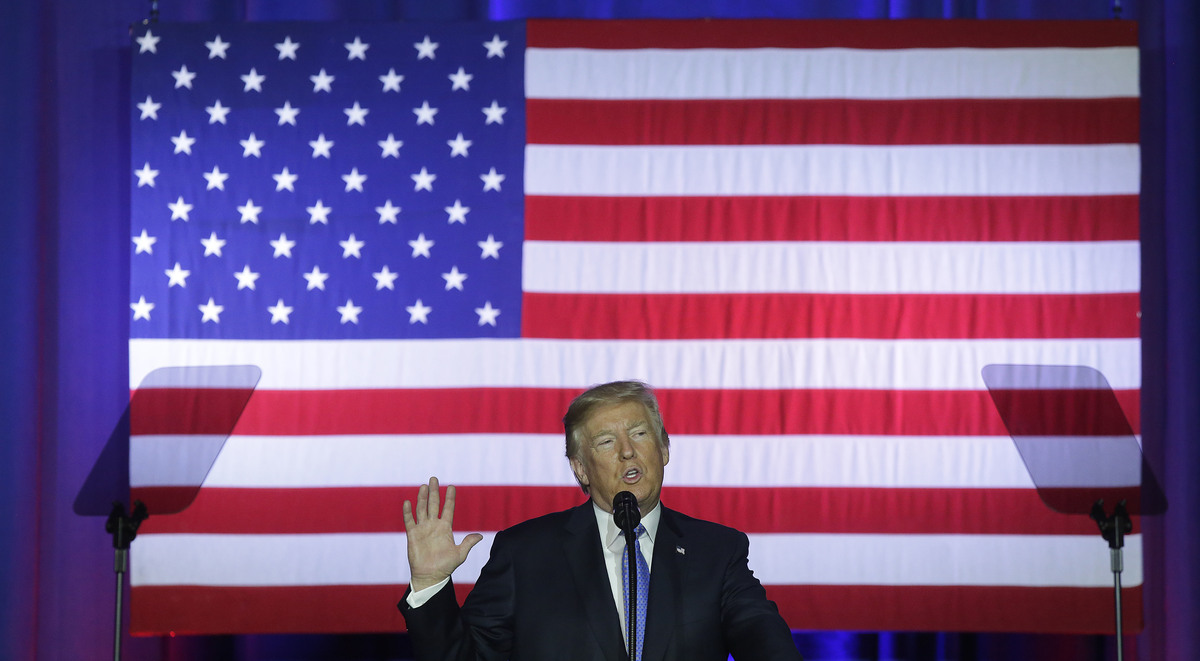 President Trump speaks about the Republican tax plan Wednesday at the Indiana State Fairgrounds in Indianapolis.

Democrats, however, warned the GOP plan would provide a windfall for the wealthy. Only people earning more than $418,000 pay the top individual tax rate now. And congressional experts say most of the savings from a lower corporate rate would flow to investors, not ordinary workers.

What's more, the GOP plan would eliminate the estate tax — which applies only to those with assets of more than $5.49 million — as well as the alternative minimum tax, which hits upper-income taxpayers.

"Under this plan, the wealthiest Americans and wealthiest corporations make out like bandits, while middle-class Americans are left holding the bag," said Senate Minority Leader Chuck Schumer, D-N.Y.

Schumer noted that some working families could end up paying higher taxes under the GOP plan because it calls for raising the lowest tax rate from 10 to 12 percent and eliminating personal exemptions.

Backers say their plan will not shift the burden of taxes from those at the top of the income ladder to the middle or the bottom. They left the door open for a higher individual tax rate if necessary to achieve that goal.

Republicans are preparing to use a procedural move to avoid the threat of a Democratic filibuster in the Senate. But Trump has also tried to win Democratic support for the tax plan. Democratic Sen. Joe Donnelly, who is up for re-election next year, joined the president at the kickoff event in his home state of Indiana.

Trump has held similar, campaign-style rallies for the tax plan in Missouri and North Dakota — both states he carried last year with Democratic senators who will be on the ballot in 2018.

Republicans hope to simplify the tax code by eliminating many deductions, although they've promised to preserve tax breaks for mortgage interest and charitable giving. The deduction for state and local taxes is on the chopping block. That would be especially costly for taxpayers in high-tax states like New York and California, many of which are governed by Democrats.

While closing tax loopholes would offset some of the lost revenue from lowering rates, the proposed tax plan could still balloon the federal deficit. Republican lawmakers reportedly plan to craft a budget that assumes up to $1.5 trillion in additional red ink over a decade.

Even that may not be enough to accommodate what proponents have described as "historic" tax cuts, likely totaling trillions of dollars.

"This is a massive tax cut with an insufficient plan to pay for it it," said Maya MacGuineas, president of the Committee for a Responsible Federal Budget. "There is going to be a multitrillion-dollar gap. And the concern is that the political environment is going to make that grow bigger instead of smaller, because one thing politicians don't seem willing to do right now is pay for things or make any hard choices."

While some Republicans argue that faster economic growth sparked by the cuts would help to refill government coffers, independent experts are skeptical. Economists at Goldman Sachs estimated last week that tax cuts would add only 0.1 percent or 0.2 percent to GDP growth over the next couple of years. Both Treasury Secretary Steven Mnuchin and National Economic Council Director Gary Cohn are Goldman alumni.

William Gale of the nonpartisan Tax Policy Center predicts Republicans will have to use budget gimmicks and overly optimistic revenue forecasts to fit the proposed tax cut under their $1.5 trillion ceiling for increased deficits.