Accessibility links
Stephen And Owen King On The Horror Of A World Without Women In 'Sleeping Beauties' What if every woman on earth went to sleep and never woke up, leaving only men to run things? That's the horror at the center of Sleeping Beauties, the new novel from Stephen King and his son Owen. 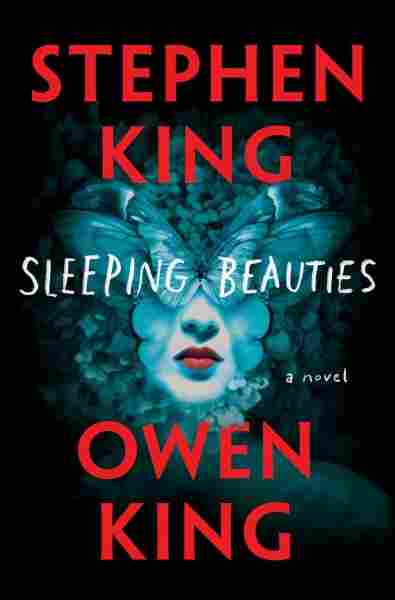 by Stephen King and Owen King

What would happen if every woman on earth went to sleep ... and never woke up? Only men would be left to run the world.

If that's not the beginnings of a horror page-turner, we don't know what is. And it is — in fact — the premise of Stephen King's new book, Sleeping Beauties.

You'll discover the first twist right on the cover: King has a partner in crime, at least in this endeavor — his son, Owen King, who had the initial idea for the book.

"Owen kind of tossed this thing off, 'What do you think would happen if all the women in the world went to sleep?' And all my lights came on," Stephen King says. "They all went from red to green at once."

On the process of co-writing a 700 page novel

But in this case, what we did was he'd write 25 pages and then I'd write 25 pages, or 30 or 35, and we had this scaffolding that we had talked through together, and so we'd just pass it back and forth. But one of the things about collaborating with somebody is that you want them to take ownership of what you've written and you want to be able to take ownership of what they've written, so I rewrote him and he rewrote me, and then also — we thought this was especially clever — we would leave openings inside the sections of the book that we wrote, and I would leave a message for him when it was my turn, and I'd say "Okay, this white space here, I want you to write a scene with this character, and I want this to happen, and here's how I think it will play out, and you know, just make it as hard as possible for the poor old guy," and then he would do the same to me.

Stephen: Well you know, the major thing that we were doing by leaving those holes in the script was giving us a chance to blend our writing together, and the result was, when we were done, the stuff was so interwoven, it's almost as though a third person had written this book ... So it's almost like we created a third person, which could be a horror story in itself.

On the centrality of women in Sleeping Beauties

Owen: You know if you read the book — and this is a bit of a spoiler — the story ends up splitting and the male characters are in one world, which is the world we're familiar with, and the female characters, after they fall asleep, they end up in another world, and it's not as if the world that they find themselves in becomes some sort of matriarchal utopia. An incredible number of things go wrong for them, but what's different about the world where the women end up is that in spite of all these challenges, in spite of all these things that go wrong, they never give up, they never lose focus.

On what comes next, besides a book tour

Owen: For me, the great thing about this experience is that it's very unusual to get to spend the kind of time that we got to spend together to work on this book ... I'm thrilled with the book. I'm very, very proud of it, but the thing that I liked the most about this was that I got to spend all this time with my dad.

Stephen: Yeah I thought it was a great gift to work with Owen, to hear him say "Yeah I'd like to embark on this project with you." You know, in a lot of ways writing a novel is like sailing across the Atlantic Ocean in a bathtub. It's a lonely job and it's a long job, and I had somebody with me on it, and that was great and for it to be my son ... that was a tremendous gift.