Accessibility links
Sorry: Demi Lovato's Not Sorry The pop singer's new R&B-influenced album, Tell Me You Love Me, reflects her struggles with mental illness and addiction and her newfound empowerment. 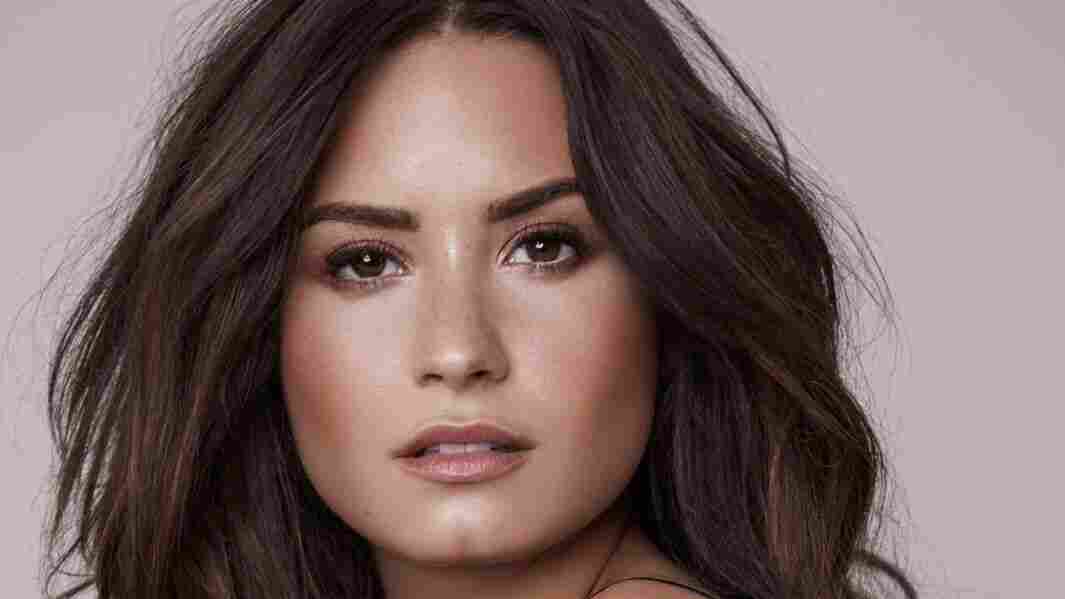 Demi Lovato's new album, Tell Me You Love Me, is out now. Dennis Leupold/Courtesy of the artist hide caption 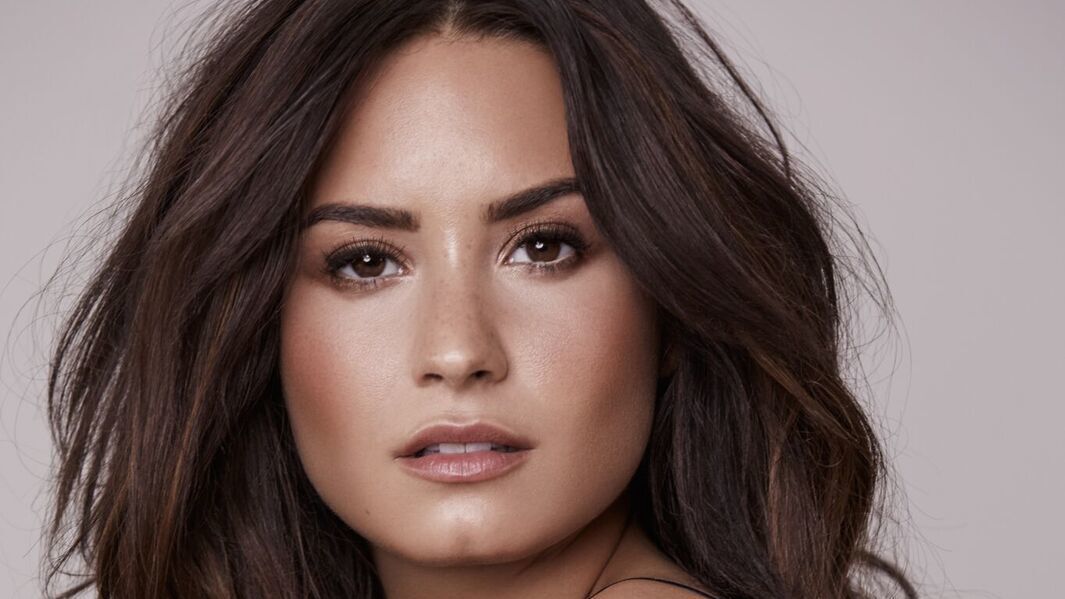 Demi Lovato's new album, Tell Me You Love Me, is out now.

Dennis Leupold/Courtesy of the artist

Pop singer Demi Lovato has never been a stranger to the spotlight. Her mother was a Dallas Cowboys cheerleader and country singer, and her sisters also act and sing. And Lovato got started young; she made her TV debut as a child actress on Barney & Friends at the age of 10.

Her breakthrough moment, though, was her role in the Disney Channel's popular 2008 musical-movie Camp Rock alongside the Jonas Brothers. By 2009, Lovato was starring in the Disney TV show Sonny With A Chance, and had added singing to her resume with the release of her first studio album, Don't Forget.

The spotlight wasn't always easy on Lovato, though. In 2010, at 18 years old, she abruptly left her international tour with the Jonas Brothers and checked into a rehabilitation treatment facility. She later revealed that she had been struggling with alcohol and drug addiction, along with an eating disorder and suicidal thoughts. While in treatment, Lovato was diagnosed with bipolar disorder.

Getting healthier has been a constant process for Lovato, but she does not shy away from letting her fans know about her struggles with mental illness — including in her new album, Tell Me You Love Me. It's full of R&B-influenced songs meant to show off her voice, Lovato says, and the album has just as many songs about being young and having fun as about these more vulnerable topics.

Lovato spoke with NPR's Ailsa Chang about her breakup song for her former self, her openness in talking about mental illness and what recovery has looked like for her. Hear the radio version at the audio link, and read more of their conversation below.

Ailsa Chang: You grew up in a family that was used to being on stage ... Was there ever any question about what you would end up doing with your life?

Demi Lovato: I don't think there was any question that I would end up as a musician or an actress. The first time I stepped on stage was in kindergarten — it was at my school's talent show. I fell in love with being on stage and with singing at a very young age. I loved the emotion that I could pour out on stage; I mean, I wasn't really pouring out emotion when I was 4! But when I started performing, I loved using my body to express the words in the songs that I was singing.

But the constant spotlight wasn't always kind to you. You've talked about being bullied about your weight at an early age. You struggled with eating disorders, even suicidal thoughts — and eventually, you turned to drugs.

Yeah, I've dealt with a lot, and I struggled a lot. But I'm in a really great place today. I've opened up and shared my story many times, and I opened up about the things that I coped with. It was a really rough time... but I feel like I have a really good handle on my life. I'm five and a half years sober now, and I'm in recovery for my eating disorder as well.

I want to talk about a song on your album, "You Don't Do It For Me Anymore." In the verse, you sing: "I see the future without you / the hell was I doing in the past? / Now that I've learned all about you / A love just like ours wouldn't last" — Who is that you're letting go of?

I actually was singing this song about my alcohol and drug addiction. When you first hear it you think, "Wow, that's pretty harsh for an ex-boyfriend!" But for me, it was about my old self and —

You were breaking up with your old self.

Yeah, I was breaking up with my old self. Definitely.

What was the rock bottom for you?

Rock bottom hit me in a moment when I was drinking vodka out of a Sprite bottle at nine in the morning on my way to the airport. I actually threw up in the back of the car service, and I had a moment where I thought to myself, "Wow, this is no longer glamorous. This is no longer a young person having fun with drinking and alcohol and experimentation. This is actually pathetic and sad." And I felt like there needed to be a change in my life, because I had gotten to a place where I was no longer proud of myself and the person I had become.

When you were in rehab, you were diagnosed with bipolar disorder and you talk very candidly about your mental illness. You also advocate for others to be open about their mental illnesses. Why is it important to you to talk about mental health in such a public way?

Do you get tired of talking about your mental illness? Do you worry that it becomes a story that you're known for — that it's this narrative that drives your new music and it's this thing that you have to keep talking about in interviews?

Well, fortunately my new music isn't all about my struggles. It has a lot to do with my journey and my life and where I'm at today as a single 25-year-old woman who is living on her own for the first time [and] who has gone through a breakup that was really impactful, who is dating; you know, a bunch of stuff that you can relate to. There are times when I'm doing interviews and I feel like I sound repetitive. It's not that I feel obligated or pressured to talk about it or that I get tired about talking about it; I just fear that sometimes people get tired of hearing my story.

You know, your commitment to being really open and honest about yourself, it's a commitment that is all over another song on your new album, "Sorry Not Sorry." It sounds like you're totally done with apologizing. What does that feel like?

It feels liberating. And the song actually was written — for me, again, it wasn't written for an ex-boyfriend or anything like that. I was thinking about the bullies that bullied me in school, and how well I'm doing in my life today, and how I don't give a flying f*** about it. I've spent so many years apologizing for my behavior and for the person that I used to be, so now I no longer am apologizing for who I was.

Can you tell me how you got there? I know that's a huge question, but you are 25; I know you have gone through so much in life. I'm 41 and I wish I could say, "Yeah, I'm done apologizing for myself. I'm done explaining myself and looking for justification."

I think I've lived a lot of life. What people typically go through at an older age — I accelerated my life at a younger age with the struggles that I've had. And, I feel like I've had incredible people around me who have helped me get here; I can't take all the credit myself. It's a daily thing where I think about it, you know — some days are easier than others. But staying sober and staying in recovery is extremely important and I have people around me that hold me accountable for it. So it's easy and sometimes difficult; but for the most part, I've just lived a lot of life.

There are parts of this album that come from a pretty vulnerable place, but this is also a really, really fun album. It's playful, it's sexy. You talk about being single and dating. There's one song called "Sexy Dirty Love" — Who are you writing this song for?

I was writing this song for somebody that I was really interested in — somebody that I had been talking to, that I had a crush on. And, you know, when you go into the studio, you feel very inspired by the things that are happening in your daily life and this was where I was at. I was feeling confident, feeling sexy and I wanted to write a song about it.

Your new album also has this really strong R&B feel to it. Is that something new you brought in through your vocals?

It's something I wanted to explore when I started making this album because recently [during] the Grammys performance, I was able to showcase my vocals more than my pop music was doing. People ... had known my songs, but they didn't know I could sing the way that I can. I knew with this album it was a goal of mine to show the world the voice that I have. And I wanted to go more soulful with it, because that's the type of music that I have fun singing.