Accessibility links
16 Years Since The First Deployment, U.S. Soldiers Prepare To Go Again Thousands of soldiers are preparing for yet another Afghanistan deployment. They are the tiny segment of American society in military service. On the eve of their departure, they share their thoughts. 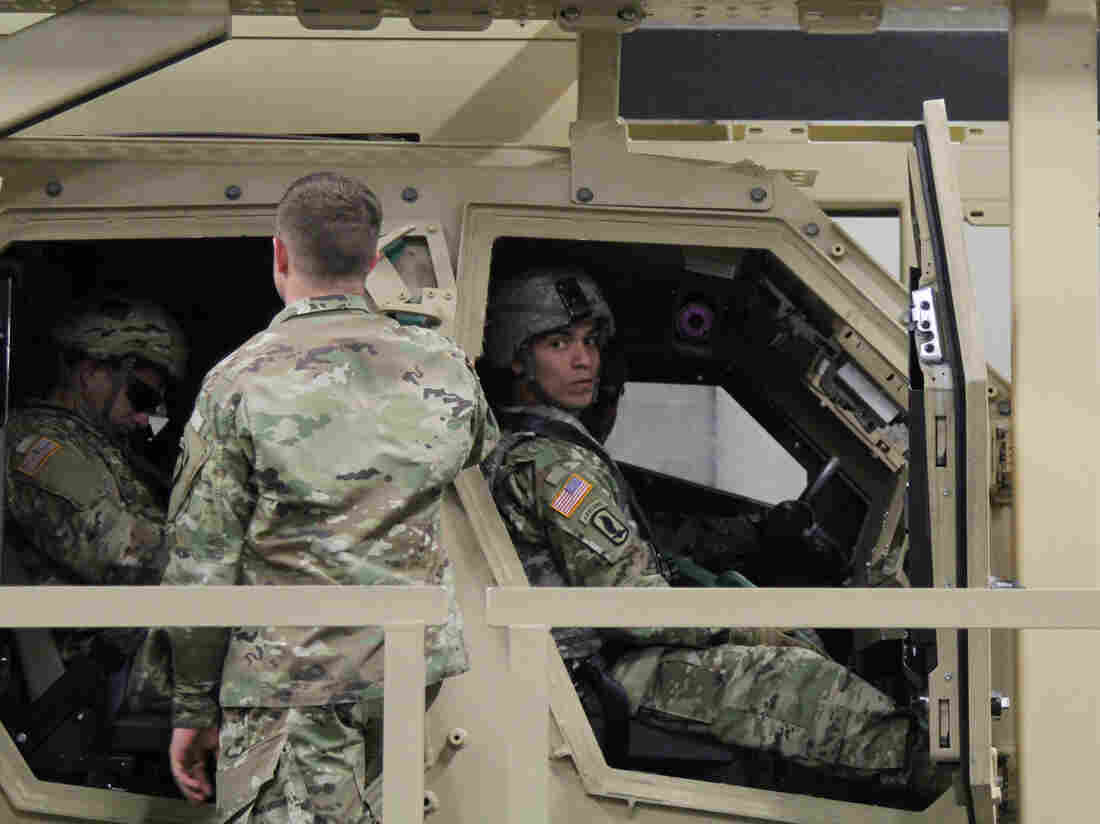 Soldiers practice roll-over drills ahead of their deployment to Afghanistan at Joint Base Elmendorf-Richardson. Zachariah Hughes/Alaska Public Media hide caption 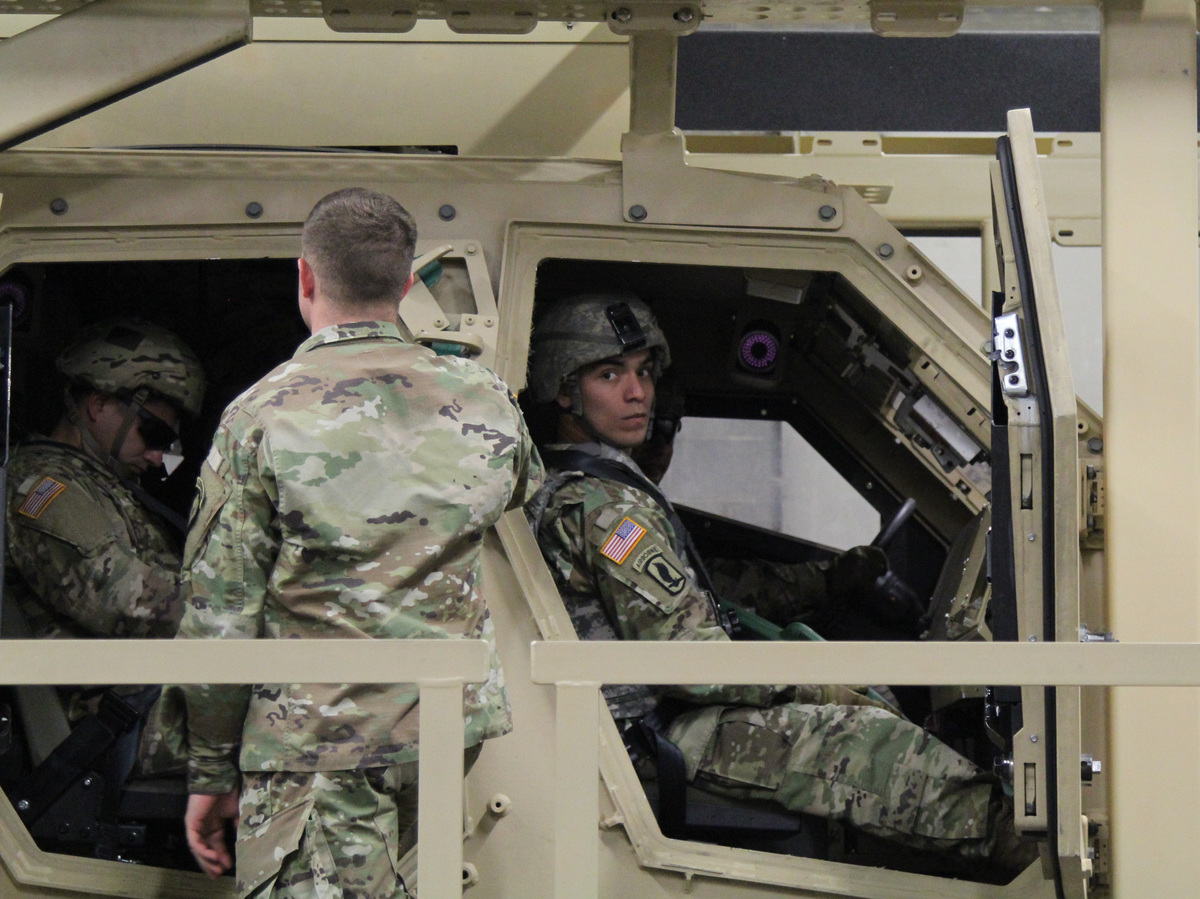 Soldiers practice roll-over drills ahead of their deployment to Afghanistan at Joint Base Elmendorf-Richardson.

On a recent September afternoon in Alaska, five soldiers were locked inside the cab of an M-ATV armored assault vehicle suspended within big metal hoops. The apparatus spun them upside down, like some kind of military carnival ride.

The point of the exercise is learning how to evacuate a vehicle if it flips, whether that's from rough terrain or a roadside explosive.

"So in the event it does happen while deployed, they can react appropriately," explained Staff Sgt. Dustin Ogden.

Ogden is among thousands of troops readying to deploy to Afghanistan as the United States approaches the 16th anniversary of military operations there.

One of the units heading there is this airborne infantry brigade based at Joint Base Elmendorf-Richardson in Anchorage, the 4th Brigade Combat Team 25th Infantry Division.

News the unit would go was announced in April — before President Trump ordered a 4,000-troop increase in the U.S. presence there. Though some of these soldiers have seen multiple combat deployments, for many it's their first time.

About 2,100 troops are headed for a nine-month deployment at sites scattered mostly across eastern Afghanistan. But unlike the last time the 4-25 deployed to the country, from 2011 through 2012, their primary mission will no longer be direct combat. Instead, they're advising Afghan security forces and assisting in their training, which involves teaching a lot of military basics.

"How we fire our weapons systems, how we put together our weapons system, how do we conduct our patrols, things of that sort," Sgt. 1st Class Aaron Cawthon explained. "That way they can take the lead and protect their country."

Cawthon's from San Antonio, Texas. He enlisted not long after 9/11, and his first deployment was the invasion of Iraq. This will be his fifth time deploying. But each previous stint focused more on direct engagement. Still, Cawthon isn't treating it any differently. He's taking the same steps to prepare himself and his family. His packing list and mental expectations are like almost every other time he's deployed.

"It's just a different mission," Cawthon said nonchalantly. "We're still going to be over there in a combat zone."

Cawthon is in charge of 26 other soldiers, and many of them have never deployed before. They have what are called "slick sleeves," fuzzy patches of green Velcro on their right shoulder where the insignia patch for a combat deployed unit will eventually go.

Originally from Nevada, Cpl. Hank Thompson has been in the Army just a year-and-a-half, and his sleeve is slick. When he learned the unit would be sending personnel to Afghanistan, Thompson hoped he'd be tapped.

"I was pretty jovial," Thompson said. "When you go to be especially an infantryman, it's more of a right of passage. We didn't join to sit on the side lines."

Thompson's job is as a radio telephone operator, but he has no idea whether that'll be the kind of task he's helping with day-to-day in Afghanistan. However, that doesn't matter — he just wants to go.

"It's one of those things that you're kind of secretly hoping for, and then you're secretly hoping that you do see some action," Thompson said, adding that he and others wanted to become Army soldiers in order to "take part in the fight, versus sitting in garrison or doing the training rotations over and over and over again."

In this he's hardly alone.

Sgt. Nicholas Murray did a combat deployment once before in Afghanistan's turbulent Helmand Province, patrolling villages with special forces to beat back the Taliban. Though the Army's role is ostensibly different this time around, Murray is still excited to be going back.

"I can't wait to get over there. And do my job," Murray said.

According to Murray, as an infantryman that job is straightforward.

"To close with and destroy the enemy," Murray said, quoting the Army field manual for infantrymen.

This time he'll be teaching his Afghan counterparts how "to close with and destroy the enemy." Even though this isn't strictly a combat mission, the prospect of engagement still looms large.

"It's kinda hard to explain," Murray said of his eagerness to re-deploy. "As infantrymen it's an adrenaline rush, I guess you could say, that some people grow attached to."

One fixture of deployments is separation from family. 27-year-old Murray is a father of three. He and his wife are expecting a fourth child to be born sometime in the months ahead.

Personnel with the 4-25 have already arrived in Afghanistan, with the remainder of those deploying set to depart in the next several weeks.