Accessibility links
Hunger, Both Physical And Emotional, In 'The Comfort Food Diaries' Emily Nunn's sharp memoir chronicles an epic road trip she took in search of comfort — culinary and otherwise — after losing her job, her brother and her fiance and a descent into alcoholism.

Hunger, Both Physical And Emotional, In 'The Comfort Food Diaries'

Hunger, Both Physical And Emotional, In 'The Comfort Food Diaries' 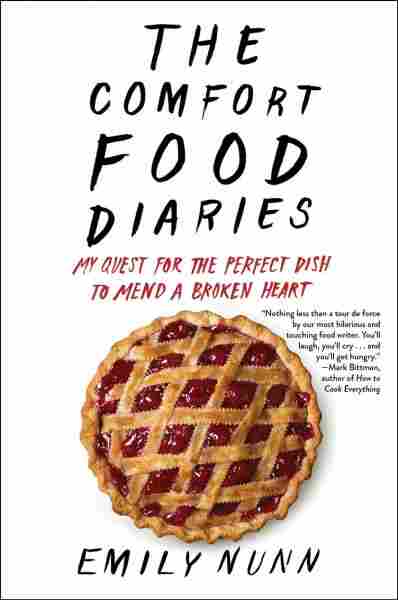 My Quest for the Perfect Dish to Mend a Broken Heart

A few years ago, suddenly jobless and homeless, Emily Nunn set out on what she sardonically calls her "journey back from madness." It would culminate in her new memoir, The Comfort Food Diaries: My Quest for the Perfect Dish to Mend a Broken Heart.

Nunn's life had seemed perfect. After a chic career at the New Yorker (where she co-created the Tables for Two restaurant review column), she'd jumped to the Chicago Tribune; when she became a recession casualty and got laid off, life was still beautiful because of her dreamy fiancé, "the Engineer," who was "tall, handsome, funny, wore Brooks Brothers suits," and had a blue-eyed daughter who became the child Nunn didn't have.

Little did she know that the "darkest winter" of her life lay ahead. Her world began to unravel when her beloved brother, Oliver, a closeted gay man who had struggled with his sexuality, committed suicide. Devastated and guilt-stricken, Nunn sought solace in a faithful old frenemy: alcohol.

The "alcoholic gene" was a family curse that Oliver had succumbed to as well. "Alcoholism is like charisma; you either have it or you don't," she writes with tart humor. Misery memoirs run the risk of having soggy bottoms, but Nunn's sharp writing, studded with sarcastic aphorisms, has a crisp textural bite. It seems wholly in character when she declares that the grapefruit is her favorite fruit, "full of sweetness but leavened with a satisfying bitterness."

As her drinking got worse, so did her relationship with the increasingly aloof Engineer. They broke up, and Nunn found herself alone and adrift. One wine-darkened night, she poured out her woes on Facebook. She woke up hungover and mortified, but her de profundis had touched a nerve. Family and friends from all over the country invited her to come visit. The soothing idea of a Comfort Food Tour took shape, and after a rehab stint, Nunn hit the road.

'Khichuri': An Ancient Indian Comfort Dish With A Global Influence

What followed was a heart-warming safari of food, friendship, and simple joys. Everywhere she went, she and her hosts baked pies, seared scallops and cooked up a storm. Nunn is an excellent food writer, evoking with precise, sumptuous detail the "properly pan-fried, leathery slices of ham and the biscuit with slightly crisped exterior and dense buttery interior, stained by the fried meat." The book is interleaved with recipes gratefully emblazoned with the names of the various hosts whose tonic kindness sustained her: Aunt Mariah's Rolls; Toni's tomato sauce; Eileen's Savannah Crab Stew.

But every visit must end. And when it does, her hosts wave goodbye and head back to their spouses, partners, children, pets, jobs and lives. Nunn drives on, dogged by the "fear of being alone forever."

The book's subtitle, My Quest for the Perfect Dish to Mend a Broken Heart, is slightly glib and misleading – food is not the dominant theme here. What is, and what infuses Nunn's story with poignancy and depth, is another word beginning with F: family.

Nunn is keenly aware that her search for the "perfect dish" is a chimera, for no mess of pinto beans and cornbread, however perfectly cooked, can satisfy the emotional hunger inside her. But remarkably – and this is what makes the book special — Nunn is not in search of another Engineer. Instead, as she mourns her brother Oliver, she yearns to reconnect with her "exquisitely dysfunctional" womb family, lost behind walls of silence.

... food is not the dominant theme here. What is, and what infuses Nunn's story with poignancy and depth, is another word beginning with F: family.

As she heads to her emotional heart of darkness, her hometown of Galax, Va., she recalls the anxieties of growing up with a glamorous, depressed mother and a remote father. Some of the best chapters detail her ongoing love-hate relationship with her caring but controlling elder sister Elaine. "Southern families," she writes, "hand down their craziness like others pass along silverware and secret recipes."

Ironically, the two stand-out meals on her Comfort Food Tour are those in which the food is not particularly comforting.

The first is the dinner she and Elaine share with their ailing father at a Ruby Tuesday (his choice). The snob in Nunn is dismayed, but the time she spends with her father is crucial in helping her heal her relationship with him. For the first time in her life, she and her dad have a meaningful discussion – and they talk about Oliver. In a nice surprise, the steak and salad bar at Ruby Tuesday turn out to be "absolutely delicious."

The second dinner takes place in Charleston, when a local chef invites her home and serves her pasta with a chicken liver sauce. Nunn is disappointed. She'd been hoping for shrimp and grits. But then it dawns on her that this is what the chef wants to cook at home, that he is "simply being himself," not performing to fulfill others' expectations of him. It's an epiphany that illuminates her own fraught relationships: "I was chicken liver pasta to Elaine (and to the Engineer, too, probably), but she kept hoping for shrimp and grits."

Food thus becomes a way of seeing, an invaluable "touchstone for understanding what real love is." Not just for Nunn, but for all those who read this insightful, unsparing, and touching memoir.